As we launch into today’s post, Dustin thankfully made contact with the following video;
“Dear Stevil,
This has become my most favorite video ever. The description was “Two cops that have gotten a little too close to each other.”

Even if you have no use for this video, you may enjoy it. The ending is glorious.
Sincerly,
Dschlong”
Have no use for it? This is exactly what my life was like before I became a profhessianal bhlogger. Though the parallels between my life as an ambiguously gay cop and what I do now are distant, my roots in the mean (albeit fabulous) streets run deep.
Not that DPow! from esteemed advertisers Portland Design Works knows anything about ambiguously gay police officers, but he does know a thing or two about lights. I mentioned last week that PDW had a new product available called the Fenderbot which I had hoped to post a photo of, but sometimes happy hour gets in the way of progress, so it had to wait. In the meantime not only did I receive two photos of said item, but they very graciously sent me one of my own; 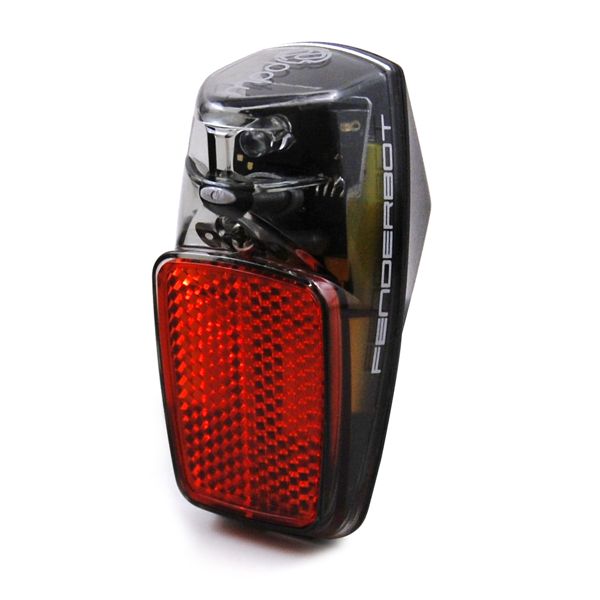 Aside from the light’s blinding brightness, there’s nothing earth shaking about this number, but I do like the fact that you can mount it right on your fender, and needn’t worry about Hobo Joe happening along to liberate your light from your possession.
My townie just got a lot more handsome.
Truth be told, in recent weeks my stable has gotten all kinds of various new bells and whistles. I am woefully neglectful when it comes to diligent replacement of chains, which generally results in entirely new drive trains. Just last month alone the proverbial shit hit the fan on nearly every one of my bikes simultaneously.
Five cassettes, five chains, two chainrings, one bottom bracket, and two pulleys. I then broke one of my frames, and upon repair, opted to get a rear disk mount installed which meant a new brake. I hate mismatched brakes however, so a new set was procured, which of course meant a new wheel, but even more than mismatched brakes, I hate mismatched wheels, so throw a new wheel set in there as well. The new brakes weren’t compatible with the old rotor so on top of everything, chalk up a new set of those. Retail for all of that would ordinarily run in the neighborhood of a million dollars, but thankfully (and I can’t impress upon you exactly how thankful I am), I racked up a laundry list of people I now owe (more) favors to in procuring new parts to replace all of the old battle worn ones.
Now if I can just remember to periodically get new chains every now and again, I hopefully won’t have to go down this road again.
Like my old friend Blintz used to say, “bikes are like friends. You can’t have too many nice ones.”
The contradiction to this rule is that nice friends don’t usually break down and need prohibitively expensive replacement parts to get going again.
That is of course unless they pop an implant or something, but luckily I don’t have any of those in my life anyway.
But one thing I do have a lot of is nice friends, and a good portion of them happen to reside in the Twin Cities, which as we all know is in constant contention for ‘America’s Bikeiest Place’, or something.
Well, Brother Yam has a word on the matter from the 612 itself;

(A generically suitable accompanying image of the MPLS, taken from my archives.)
“Another reason why Mpls has dethroned Portlandia as the bike capital of the US of A:
After consuming with the other two-wheeled wonders of our great burg, I, and a small collection of other Minneapolitans, decided to take Zappa’s advice of “America Drinks and Goes Home.” Some of us took a little longer to take heed of that second part and ended up deciding to lock up and cab it (a couple of run-ins with the curb too many).
When awaking the next day and finding our beloved Big Dummy missing, we did a couple of things simultaneously: cry, panic, call the cops and let the 612 know that beloved bike was missing. Short story: Angry Catfish got a call from a concerned citizen that a bike that didn’t belong to them was sleeping in their yard. AC’s special agent checked out Minneapolis Bike Love’s stolen bike section which I had enough sense to post to and they notified me of said homeowner’s discovery. Bike found, mostly intact and owner happy as a something that’s really, really happy.
Just a shout out to the good breeding, manners and wonderful sense of community of my neighbors and friends in the 612. Love y’all…
Brother Yam”
Friendly competition aside, there are a number of similarities that Portlandia and Mini Apple Sauce have in common. The first and most obviously being an unconditional love for all things two wheeled, the second is an unquenchable thirst for the sauce, and the third being Cheever, though I’m not sure that’s such a good thing.
It’s kinda like, “Oh, no way.. You have herpes too? Alright, high five!”
For today’s post, I’m going to close with a new segment we will call ‘Wednesday’s Music Minute’, and only unless it happens to occur on a Monday or a Friday will it be referred to as something different. The band we will discuss is a long time favorite of mine from Cincinnati called The Afghan Whigs, and their seminal release ‘Up In It’;

You may recall some months ago I discussed a band called The Gutter Twins. Aside from Mark Lanigan (formerly of The Screaming Trees), the second half of their vocalists is the Afghan Whigs’ previous frontman, Greg Dulli. ‘Up In It’ was a staple for my younger self, and though I never embarked on a journey of hard drugs, alcohol and illicit sex (at least not all at once), I always imagined this to be the perfect soundtrack for such a lifestyle.

The relentless rhythms of drummer Steve Earle and bassist John Curley provide the foundation for the dueling ethereal guitar attacks of Rick McCollum and Dulli, as the vocals stray back and fourth between a sexually charged crooning and an agonizingly pained scream.
There are a small handful of albums I would count as imperative should I ever be banished to a deserted island and ‘Up In It’ is most certainly one.
Though I would be lying if I said since viewing the video at the top of today’s post, including Grum on that list isn’t necessarily out of the question.
It is with that, that I will sign off and bid you a fond ‘happy hump day, dump day, shake your rump day’.
As my parents used to be fond of saying to me, “now get out of there and go do something.”

7 Responses to “From the top there’s nowhere to go but down.”