When we last met, I was discussing the big KONA WORLD BICYCLE MACHINE SUPER LAUNCH 2011!!!
I had regaled you with banal minutiae about hotel carpet, home cooking, and watching cartoons while locked safely behind my hotel room door;

So as I was saying, I reluctantly reserved a full suspension bike for myself for the two days of riding out of respect for the people who saw to it that I was attending this junket to begin with.

At the top of the first climb I was cursing the bike under my breath, saying things like “goddamned suspension. I feel terrible. These bikes are impossible to ride..” and so forth, when I looked down and noticed I was in the big ring. When you are not used to shifting, you are not used to shifting.
Dropping it down a gear made things considerably easier and we continued on our way, chatting amongst ourselves, while taking in some amazing views, and brilliant trail features; 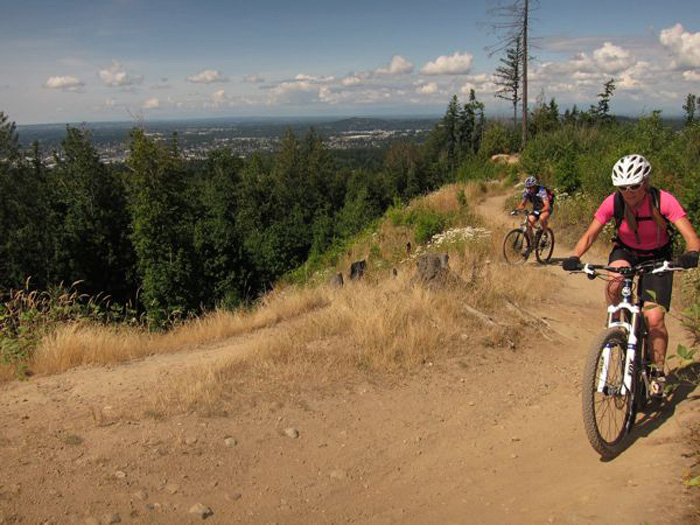 If you can imagine what it is like not only riding a bike you’ve never been on before, but a type you have very little knowledge of, and on trails you’ve never seen, that gives you a vague idea of what a rolling shitshow I was. The array of subtleties as well as both strengths and weaknesses were almost so distracting I could barely concentrate on the ride itself.

The process of learning (for example and among many other things) to ignore features in the trail that when riding a hardtail would be notible, while simultaneously recalibrating one’s timing for a weight shift in a hard left hand switchback was a never ending challenge. After some time however, I began catching on to the nuances of a full suspension bike and at the end of my time with the Hei Hei, I actually started to warm up to it a bit.
After the first day’s riding, the lot of us adjourned to Kona’s Ferndale, Washington headquarters where they treated us to another spread, and more drunken high jinx;

Poking around the compound, I came across a wealth of wonders;

As well as a gem that I had completely forgotten they were in the possession of;

If you are unaware of how historically significant this item is, then allow me to provide you with a lesson via Professor Pantaloons of Soulcraft University himself;

“The fist made its first appearance at Waldo Lake in Oregon on a mountain biking/bachelor party trip. After returning home I began working on the SOPWAMTOS (Society Of People Who Actually Make Their Own Shit) awards which were usually toilet seats with the recipient’s name painted on. I called Gary Prange at Screen Specialties (they make a lot of the frame decals for small builders and used to make them for a lot of the bigger companies). I asked him if he could make some SOPWAMTOS stickers and he not only offered to make a bunch for free, he nominated Cannondale for an award for screwing a bunch of their suppliers out of money by declaring bankruptcy.

Cannondale owed Gary about $70,000 and it almost put him out of business. He said after the creditors ahead of him in line and the lawyers took their respective cuts, he might see a few cents on the dollar. So Cannondale went through the bankruptcy and came out the other side as if nothing happened at all, except for all those creditors left holding the bag.

I was so pissed to hear this I decided a special award was needed. I tracked the fist back to Moab (“I don’t know how it got in my bag man.”) and had my friend Josh make a base for it, paint it gold, and bring it to Interbike where I attached the badge that said something like, “To Cannondale: The Golden Fist Award. For Excellence in Business”.

We presented it at our awards show but no none from Cannondale was there to accept so we walked it over to their booth. There were two very helpful older ladies at the reception desk and we told them they had won an award, set the fist on the desk, and started to walk away. Then one of them says, “Would you like me to get someone to come and accept the award?” I turned to see her smiling at me (genuinely), with the fist sitting right in front of her. “Yes”, I said. As my compatriots and I waited we watched the lady walk up to someone in the middle of the booth, point to us, and tell him the deal. He looks at us and picks up his cell phone. Then another guy 20 feet away from him picks up his phone, turns to look at us, hangs up, and makes a call. A third guy in another part of the booth picks up his phone, and now we can see they are getting a posse together. So we waited as they stared at us but they never came over to the reception desk. Pussies. So we eventually left.

Fast forward several months and I get an e-mail from a former Cannondale rep who saw the fist in the garbage at the show and asked my if I wanted to buy it back and if not, he would put it on EBay. I passed, and the fist was put up on the auction block. As I remember it went for a couple hundred bucks to our friends up north. I saw it the next year at Interbike in the back of their booth sitting kinda cockeyed on boxes of catalogs. It looked lonely, as if its time had come and gone. I still get riled up when I think about that whole Cannondale thing. Its great that they were able to stay in business and provide a lot of people with jobs that may have disappeared had the company gone under, but I think it’s complete bullshit that they can make profits going forward without any regard for the trail of destruction they left behind. “

That, my friends is some bicycle industry meat and potatoes, but now we should get back to the matter at hand. (No pun intended.)

The following day I had hit the wall of togetherness and while my compatriots continued with the meetings, Opie (this post’s featured beer can model) and I ventured back out into the woods and had ourselves a simple ride of two.

Again, I took out my Hei Hei, and we made beautiful music together, while Opie did his worst on a one speed;

We made the summit and soaked in the sun while solving a few of the wold’s problems. In all honesty, after all of the socialization and handshakes, it was nice to shade out for a little bit. I tend to be a hermit on my most social days, and with the abundance introductions that were being made, I had to hide my head in the sand for a bit.

After some time in the sun with the wind whispering to us her many secrets, we re-boarded our steeds and pointed them down hill;

The trail network on Galbraith Mountain is really something to behold and has been developed with the cooperation of the logging companies who own the land and the tireless efforts and patience of the local mountain bikers. I’ve never seen anything like it, and in the short decade since my last rides in that area, they have developed a staggeringly fun maze of singletrack that is just as fulfilling for a goofball, rubber boned sixteen year old hucker, as it is to a forty year old broken XC curmudgeon.

Upon our ride’s conclusion all I really wanted to do was to hit one of the local river’s many swimming holes, but instead was treated to an idyllic lake scene surrounded by bikinis;

I didn’t complain any.

Finally making it back to the hotel, my co-attendees were departing to yet another party, I opted out just so as to collect my thoughts and reflect on what I had seen and heard the previous few days. Clearly this area is some kind of utopia where Mountain bikers are organized and work together to ensure the health of their trails, which after all, is a resource that shouldn’t be taken for granted.

And I thought about the company that hosted me. I have seen the inner workings of Specialized, Bianchi, a few of QBP’s brands, and am intimate with those at Santa Cruz Bicycles, but I’ve never seen any place like Kona. From the relationship between the owners to the dynamic between the employees, from my limited time in their company, it would seem as though they all are as content as they could possibly be.

I don’t know. Maybe it was all an act. Perhaps on any given day the entire workforce is at one another’s throats, but just for the sake of appearances, they all were pretending to be friends.

I took it one step further and imagined what it would be like for me to work there, and I wondered if there was already an individual in place who was prone to wild mood swings and and carried a black cloud above his head and a general disdain for his compatriots. If there is not, I momentarily wondered if they were looking for one.

I also thought about the state of the bike industry itself. I have mentioned after returning from the Interbike show the last few years that I noticed far more women walking the aisles as opposed to standing in them, which has been continually encouraging to me. In comparison to the first Interbike show I attended, some fourteen years ago, it would almost seem as though the bike world had begun to balance itself out, yet at KONA WORLD 2011, there were precious few women in attendance. Of the 70 shop managers, owners, buyers who attended one of the two camps over the course of the week, I took note of maybe two women from shops.

Does this mean this website has in fact run all of the women out of the bike world, as was suggested to me recently? Or perhaps it’s something far less impressive, such as in this little microcosm, the percentages of men to women are just far more apparent.

Whatever the case, I was disappointed by all of the goatees, and hairy knuckles in the room (with the exception of my own), and would hope that as time goes by, the influx of X chromosomes only increases.

In conclusion, if there were anyway to sufficiently conclude a mess such as this, I want to thank Kona and the good people in the company’s employ for their generosity and hospitality during my time with them, and to notify them that if… Just if, they wind up unable to unload that 20″ Hei Hei (it’s easily recognizable, as it’s the only one with a penis drawn on the top tube), I would be happy to give it a home until they were able to adopt it out.
Me on a suspension bike…

Either Hell just froze over, or their bikes really are that good.