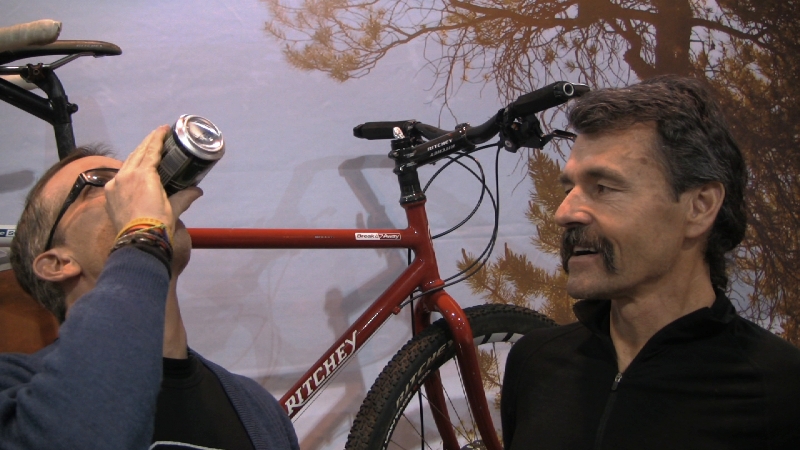 By now, everyone is well aware of the Tom Ritchey interview on Roadbike Review, but if you happen to be one who is not, I just linked it a second ago.

But say you have a particular condition which prevents you from backtracking while you’re reading, I’ll link it here too.

And then, just for good measure, I’ll put it here also.

I’ve seen Mr. Ritchey speak a couple of times, and I’m going to be honest with you here, on those occasions, I found him to get a touch ramble-ie.

But in this interview, as well, as the accompanying video;

-I very literally hung on every word.

He makes a myriad of really great points, a number of which Sean Coffey and I discussed at last summer’s Dealer Camp. (Part one and part two, if you care.)

“I thought all road bikes were gravel road bikes? I’ve been riding my bikes on gravel and more accurately—unpaved dirt roads and trails—for decades. It’s good to see 25c tires and wider rims coming back, and more importantly the clearance on bikes to run these bigger rims and tires. For some reason the bike industry ‘innovated’ away from this many years ago, and for a while many top-end carbon bikes haven’t even had room for 25c tires, much less a broken spoke. Now we’re ‘innovating’ back to where we started.”

If I were a little older, a lot smarter, had way more cool life experiences, and a sweeter moustache, I would be Tom Ritchey.

Likewise, if I were a little older, a lot smarter, had way more cool life experiences and was twenty times more mad scientist-ie, I’d be Keith Bontrager.

It seems as though I was born a decade and a half late, about thirteen hundred miles too far east and about 150 IQ points shy to have been in the trenches when their magic initially happened, but I thank my lucky stars every day that I exist in the same world that they do now.

And as far as his point I quoted previously goes, the observant among us might recall the article I wrote last year for the spring edition of Paved Magazine; 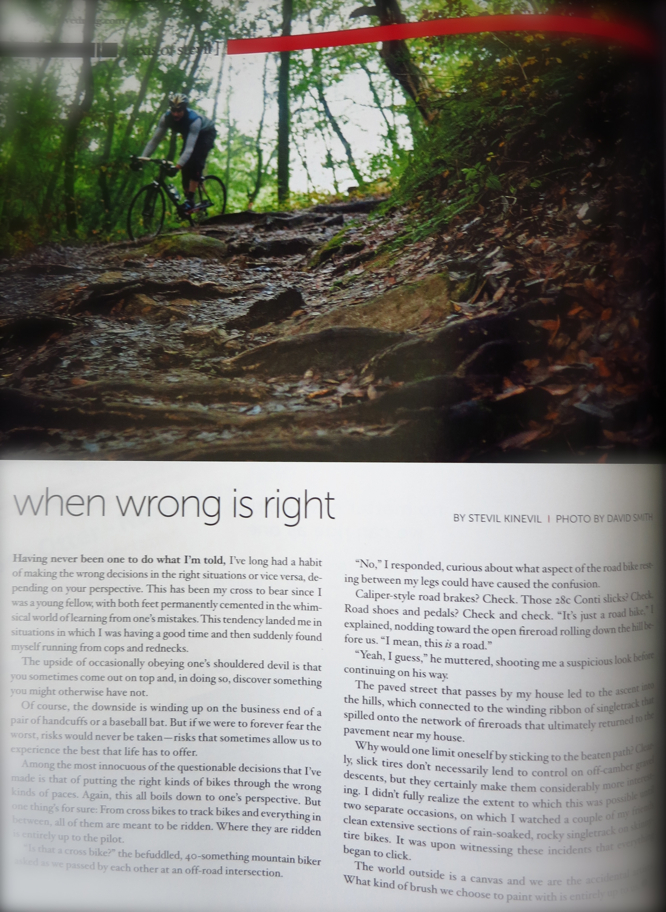 It was inarticulate, and meandering, but made the same observation regarding just how exactly a skinny tired bike can, and in some cases, should be used.

Now, as we move away from that topic, and onto others, it was just this past Tuesday morning when Sally of Maximo Supremo residents Raleigh Bikecycle Corporation made contact with a flyer and a kind plea to post it;

We’re doing a thingy in Seattle this weekend and I want to make sure your five readers in California, along with Geno and Hurl know about it. So would you please post this up on your site so I feel I’ve validated my job title?

The only question that remains is how could I possibly say no? 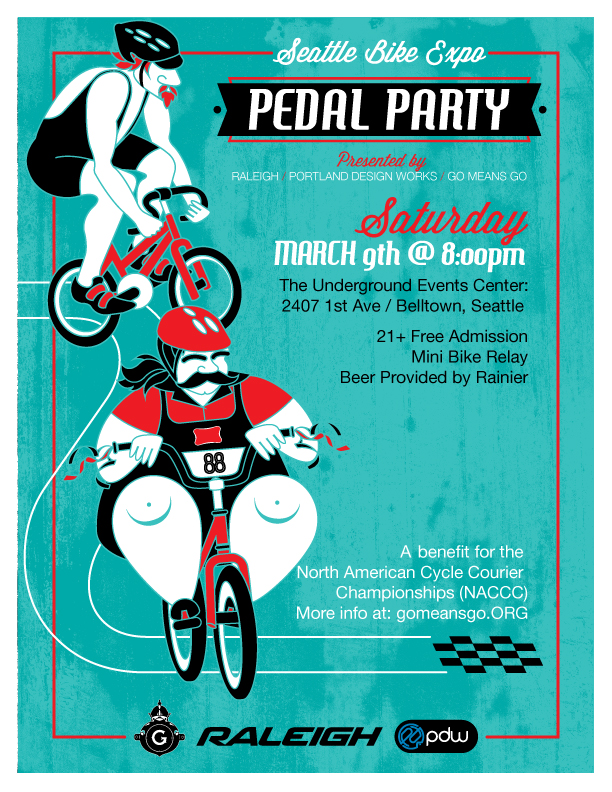 And to his point, as long as my parents are both currently in the state, it should be recognized that I have a solid seven readers here.

As we travel along with our daily bread, the Captain of the S.S. FBM made contact with their most recent videographic effort;

Pizza is your spirit animal…

More bad news from the grown men on kids bikes…

Shortly after the arrival of this correspondence, the following exchange took place between us;

Me- “I wanna be in a video.”
Steve- “Get awesome as shit. Hippie!”
Me- “I can do a bunnyhop foot plant that would blow your mind”

And with that, I can almost guarantee that my own personal FBM video ‘edit’ will be ‘dropping’ imminently; 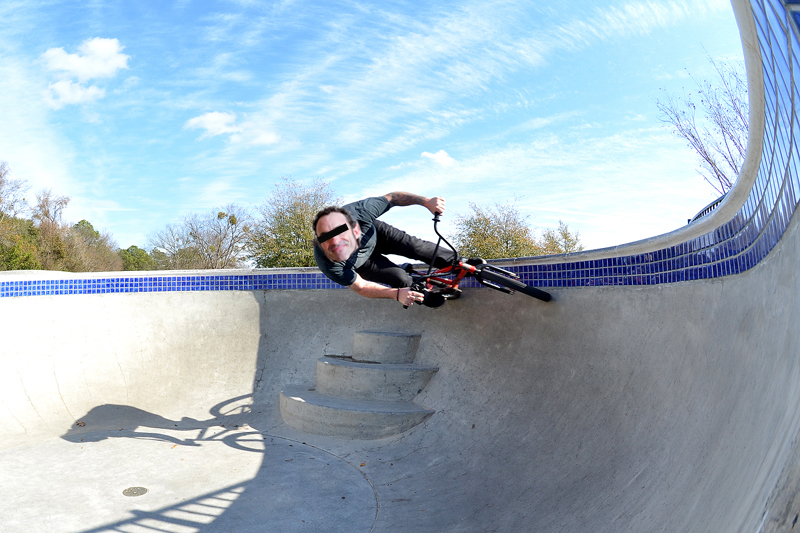 Finally, as we part ways, I would like to offer up a public thanks to Feedback Sports for their ongoing support of my tool addiction. Initially their inside guy Billy, asked if I would be interested in using one of their stands and offering a bit of insight and traction on the item. Naturally, being the whore that I am I said yes. However, when this is what ultimately arrived, I knew we’d had a miscommunication.

Billy assured me that it was a very useful piece and that I should give it a try. As much as I’m sure it would be if I lived in a world with nothing to lean my bike against, and it disintegrated every time it was laid down, I declined the offer, and noted that what I would really be interested in was one of their truing stands, as I had just passed my old Pedros stand off to a friend on which he was building a motorcycle wheel.

Billy then kindly agreed for the swap, when some time later this arrived, which I made initial mention of here, and also resulted in me shitting my mouth out of sheer stoktitude. (I think that’s a word.)

Still, I was shy a truing stand, so I inquired about simply purchasing one and seeing that my arsenal of tools with which to polish my turds was complete.

Another few weeks of radio silence passed when what should appear upon my doorstep on Wednesday but a stand to call my very own; 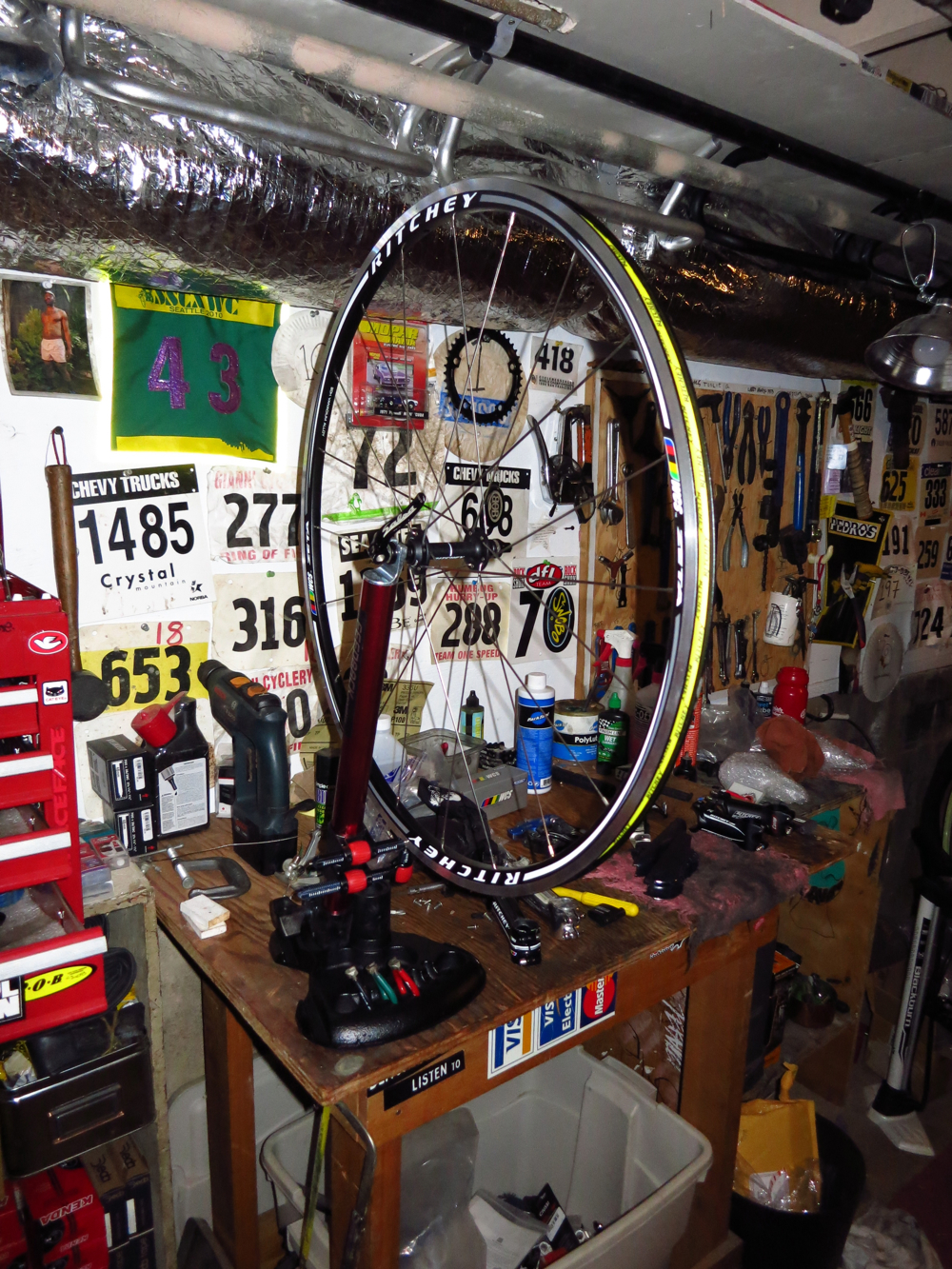 Initial thoughts on this item are that it’s the nicest home mechanics’ stand I’ve ever seen available, and I’ve had them all.

Clearly it’s not the Park T-S 2.2, which still stands (no pun intended), as a favorite, but I think the Feedback Sports stand will do the trick for my needs perfectly; 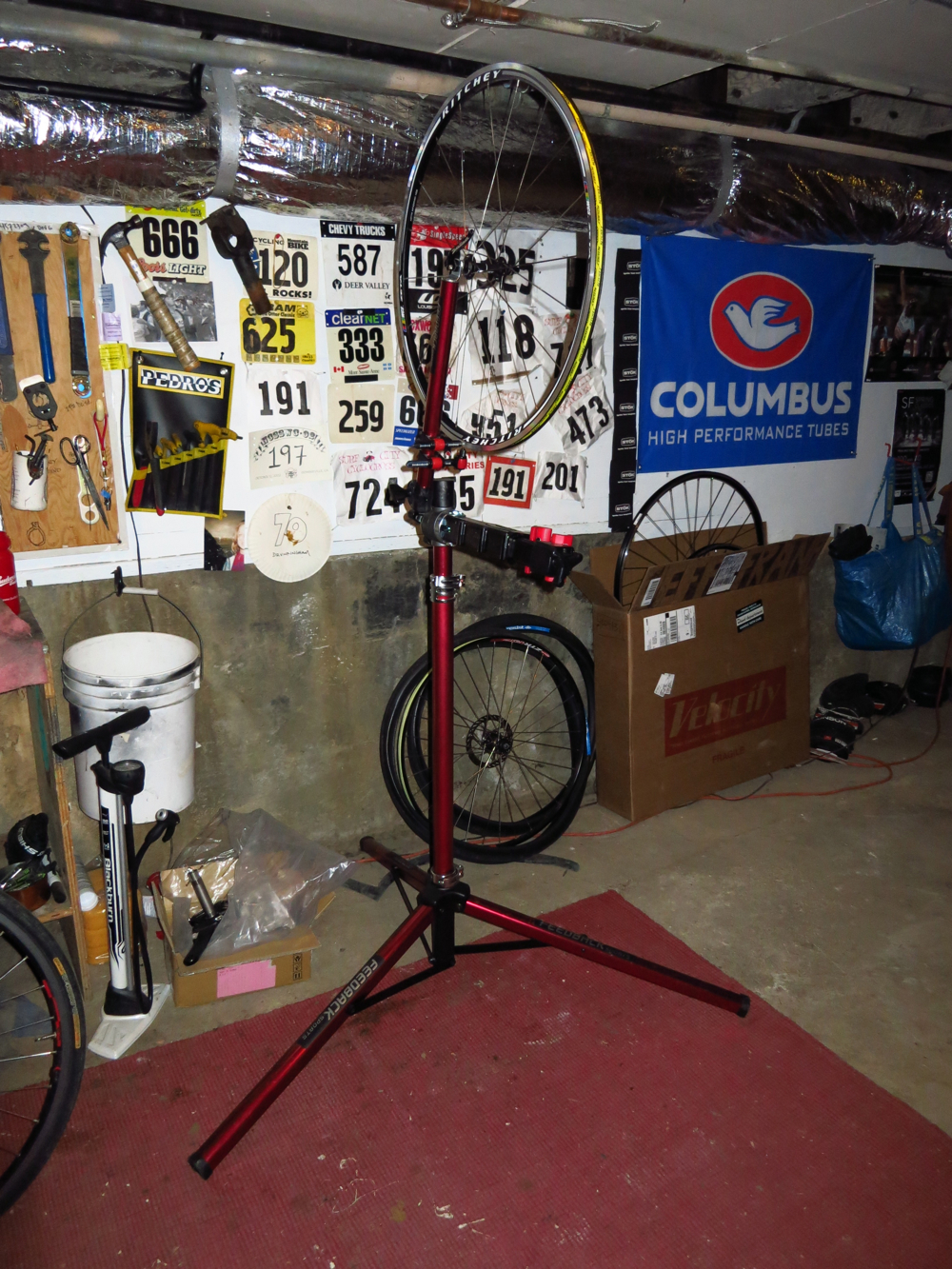 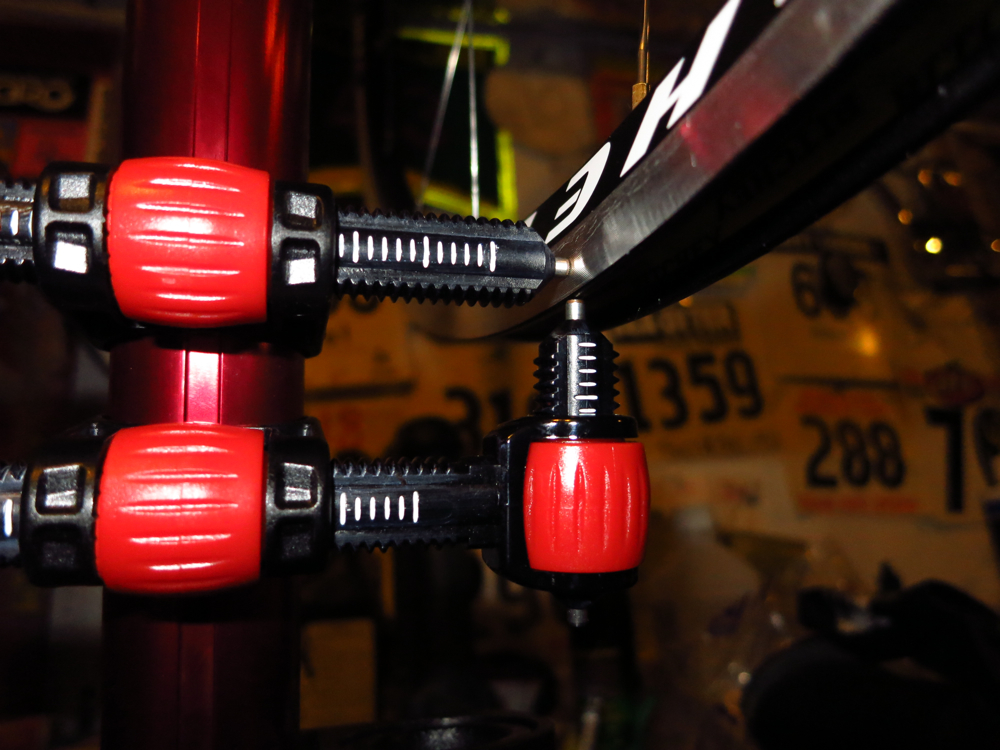 Though the gauge design is pretty brilliant, one preliminary mental note I’ve made is that I had to be extra attentive when putting a wheel in so as to make sure that it’s seated and perfectly flush in the dropout; 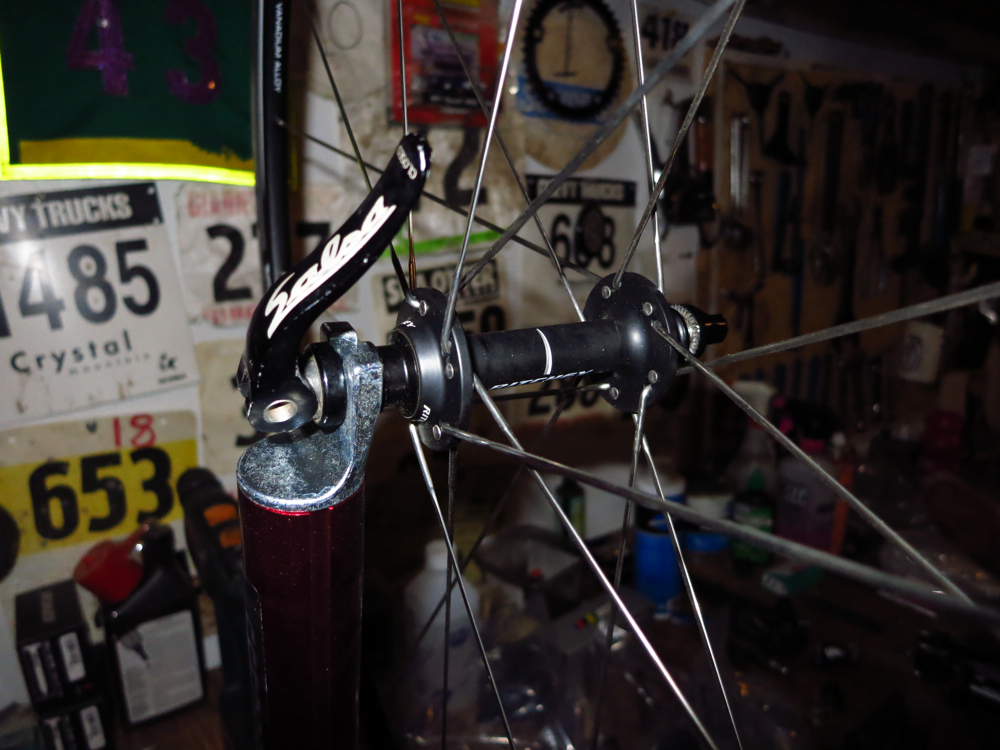 With this stand you don’t have the luxury of letting gravity to the job for you, and based on that observation, I’m not entirely sure that I would be able to build a wheel using it, in the same way that I’m not sure I would be able to ride a bike with a Lefty fork; 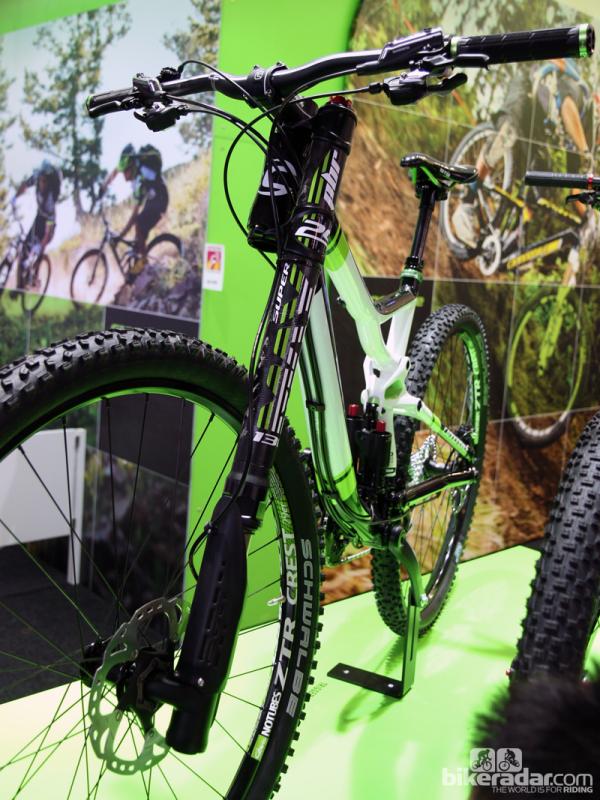 But apparently some people love them, so it’s clearly just a matter of perspective.

Perhaps due to my OCD, bringing this visual imbalance into my world is a big step for me.

As has existed through the entirety of my life, I tend to prefer and appreciate a sense of proportion and symmetry in things.

Not the least of which is Tom Ritchey’s moustache.

14 Responses to ““Wisdom and moustaches…”