After last weekend, I had a ‘come to Jesus’ meeting with myself and decided that it was high time to fly right for a spell, and considering that at its core, this here that you’re reading is a bikecycle and bikecycle action sports web log, and not, as was recently noted, something that ‘reads like tales of alcoholic woe‘.

I’d hoped the person who made that observation meant ‘tails of alcoholic? WOAH!‘, but in my heart I knew that wasn’t the case. To any readers who felt this way, I’d like to apologize and make note that this past weekend’s festivities were little more than goofballs doing what goofballs do, and recreating with canned beer. I promise not to breathe another word of it at least until this same time next year.

And while we’re on the topic of wagons, let’s speak of the legacy of one in particular. The one of which I speak of course, is that of the former Bontrager team, pictured here from an old catalog, thankfully forwarded to me from Jason who still had his, because I for sure as hell do not; “What? Why wagons? This is dumb“, you might or might not be asking/declaring. Besides the one that I am metaphorically aboard, it was the topic of one out of several burning questions I asked to Mr. Keith Bontrager via Twitter while sitting in a remote outpost in Canexico, as he spoke to the great unwashed masses during the most recent ‘Ask A Founder’ lecture at Mission Workshop; 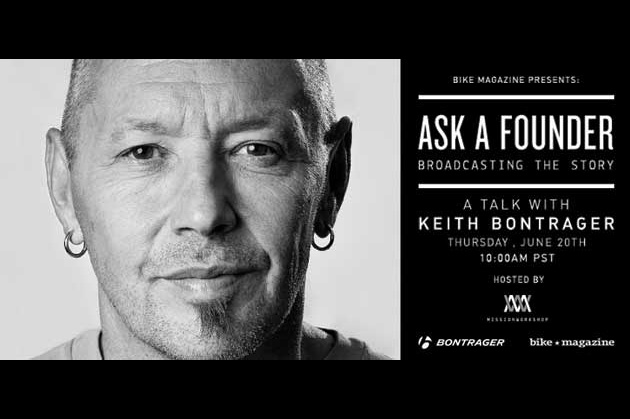 If you haven’t gotten in on these, either in person, or via your naked lady box, I recommend you do. Thus far, the two they’ve hosted (the first with Scot Nicol) and now Keith’s;

-have been stellar and hugely informative.

In an effort to get down to the nitty gritty and see what makes this particular legend tick, I posed a few of my hardest hitting questions, such as; 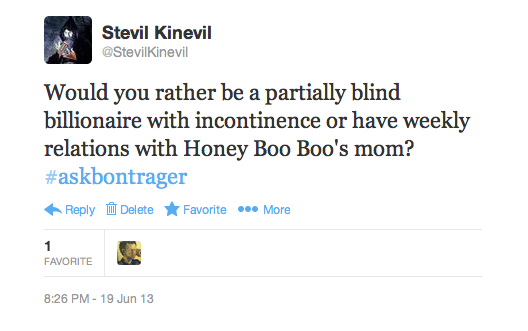 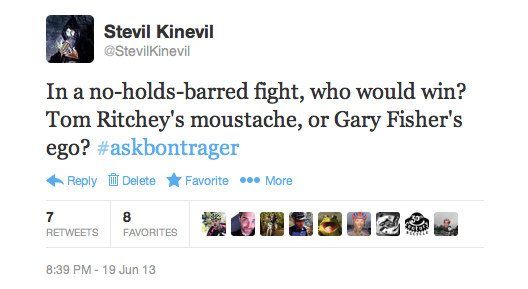 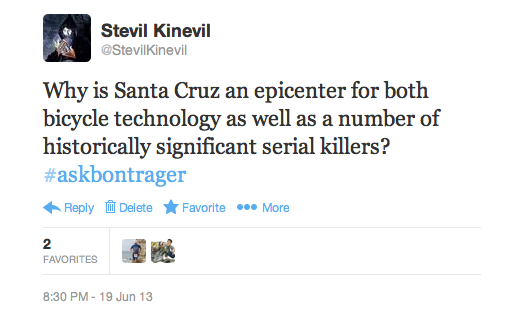 But the one that burned the biggest hole in my brain was the following; 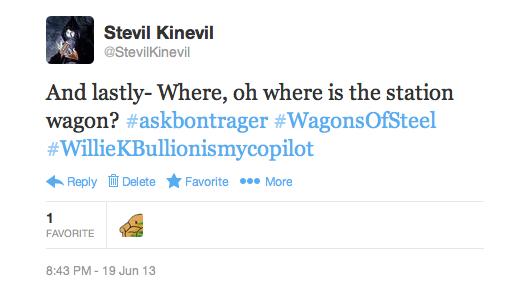 Keith loaded up his double barrel answering machine, made a gesture with his hands and declared that it had blown up and been abandoned in Georgia, where he hoped it was rescued, rebuilt and was currently running moonshine.

I liked the thought of that because the beast held a special place in my heart. Besides being the transport of my favorite team, and reminiscent of old skate cars, it was center stage for one adventure in particular involving both the inaugural (1996?) Napa Valley World Cup Mountain Bike Race, as well as the first ’50 Yards Of Hell’, overwhelmed cops, and three dozen cases of cheap beer.

I appreciated Keith entertaining my nonsense while others asked relevant questions regarding design, engineering, and his perspective of what the future holds for bikecycle wizbangs.

He clearly has at least a passing affinity for the turd in the proverbial punch bowl, though between Richey’s moustache, and Fisher’s ego, I still don’t know which would be the victor.

Now, to round out today’s post with a random assortment of whateves, we’ll start with some from Shane;

I’ve always enjoyed your collection of thoughts that is AHTBM, it makes me chuckle a good bit and feel better about the world in some way. I also find it super awesome that you share some of our correspondents, it has actually led to the owner of the shop that I work at to ask me to work on something of the sort for the shop; 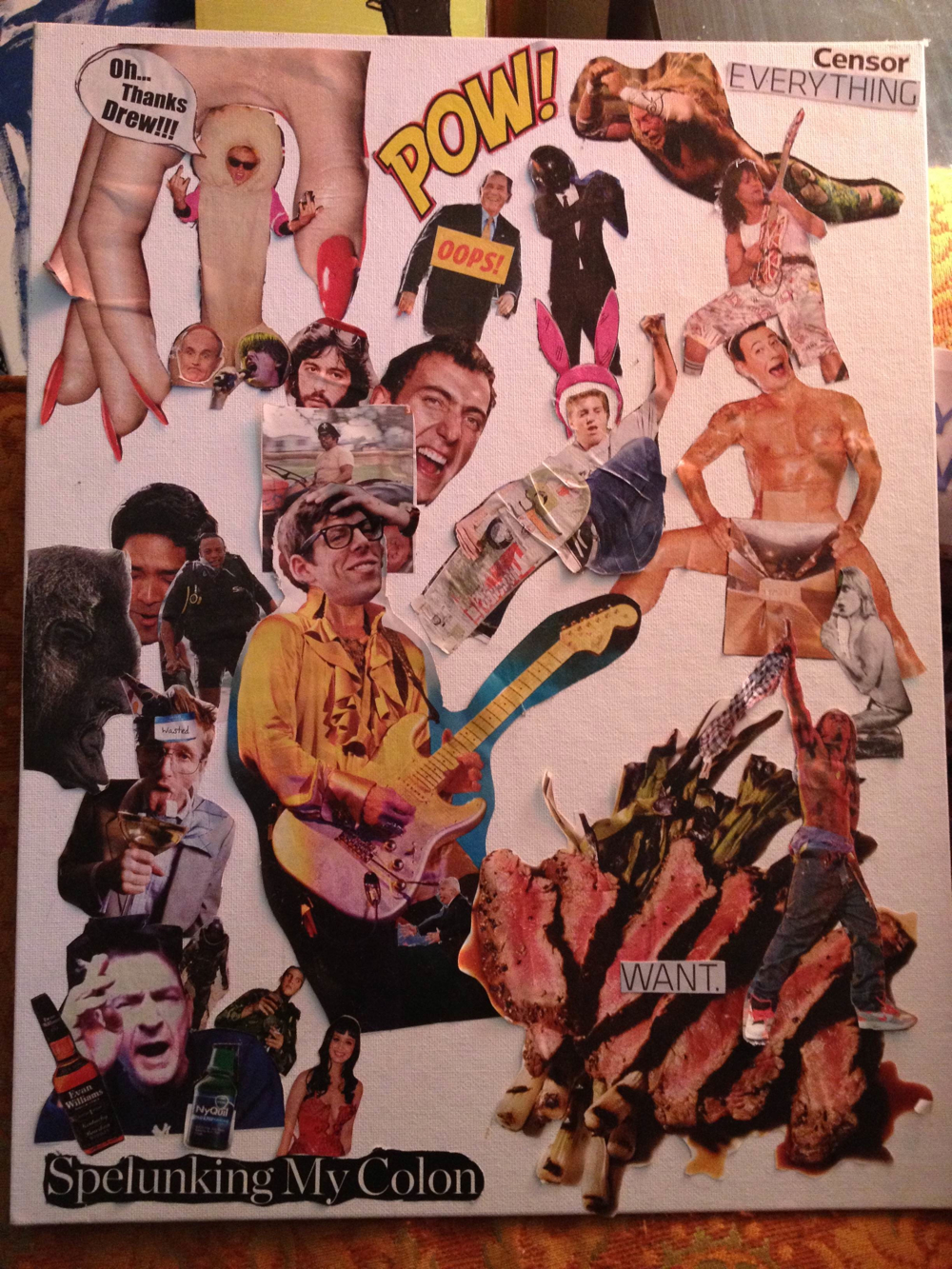 Thanks for always having something good to read and helping other’s mind soup start to boil, also here is a tribute to cultural sodomizzzzzzation.

That right there is a mighty fine collage, or what I’ve heard referred to most recently as a ‘Dream Board’. Apparently as the concept goes, you collect images of things in life you desire. They don’t necessarily have to be material possessions. It could be ideas, emotions, experiences, or in shane’s case, a beefy Pee Wee Herman, and some meat.

‘Arybody got they own kind of Dream Board.

Moving on to other hand made things, Dave from Scum City Racing sent me one of his own;

“We’re having a shop party Saturday night, is there room this week to fit it in? 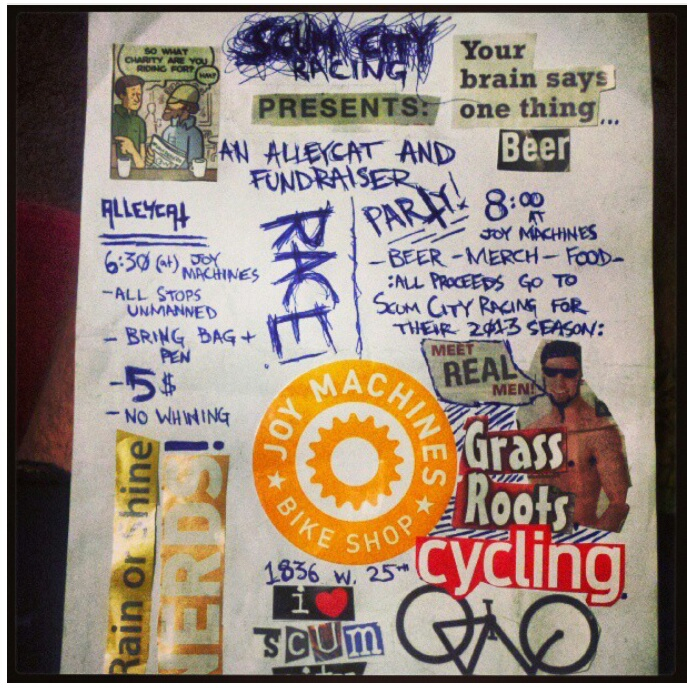 Because Scum City personnel happen to be all over the Midwest, I’m not entirely sure said party is happening. A solution to this is if there’s a 1836 West 25th in your town, go there on Saturday and see if there’s any action.

Finally, a couple of weeks ago from Andy, I got this;

“Just a little something to feed your nightmares.” 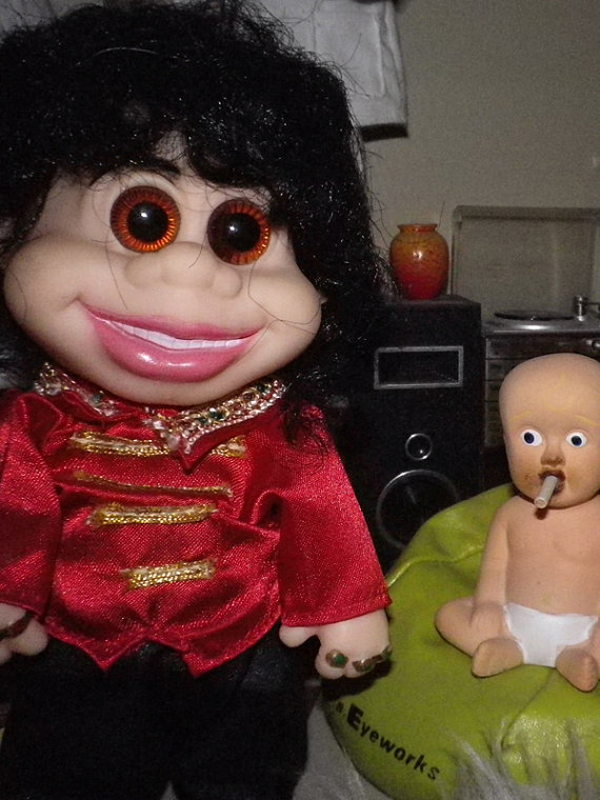 I appreciate that… It was exactly what my nightmares needed.

And it’s with that, that I bid you a fond farewell until next time. The motor’s running, and my supplies are loaded.

The sunset’s not going to chase itself.

8 Responses to “On the wagon, and into the sunset.”