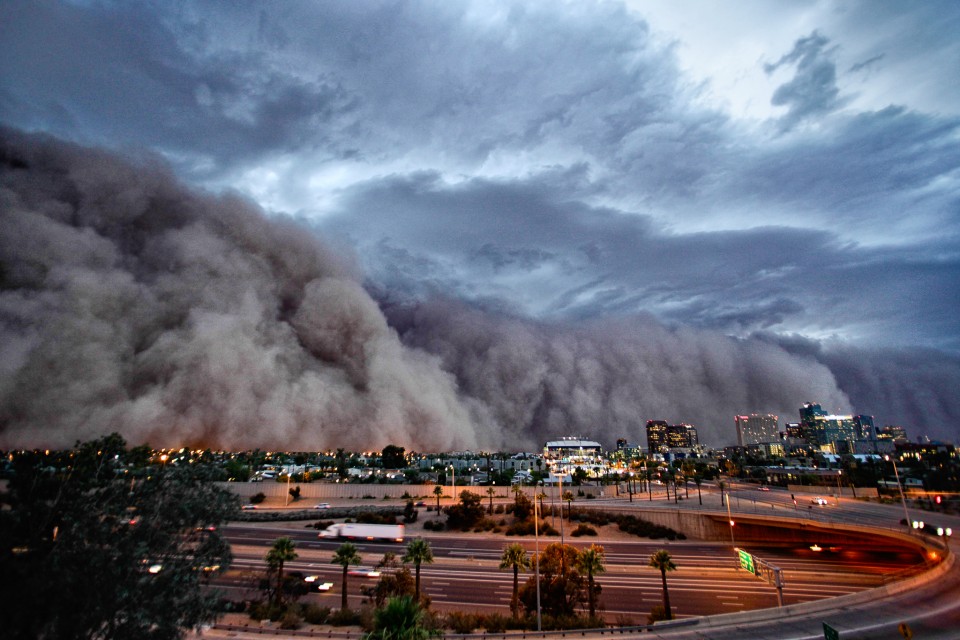 That’s a right pre-apocalyptic looking image right there, I’ll tell you what.

Thankfully the storms I have in mind today aren’t the kind that involves dust, locusts, or other end times kind of stuff. Because I’m making it my primary mission in life to try and spread a little bit of joy in a world gone mad, I will instead tell a story of fixing trails before the rains come.

Last week my old pal Yafro made with the contact, letting me know that the season’s final trail work day was going to be occurring on Saturday. It’s been some time since last I had a proper day with the trail fairies, and I was looking forward to paying my due. As a matter of fact, in the time since I’ve been injured and recovering on the couch, the BTCEB has built yet another barn burner of a trail re-route/water diversion, which was what we intended to maintain this weekend.

After arriving just in time to be handed a shovel, I hiked down the hill to where the bulk of my day would be spent. Three primary chores that needed to be addressed were to build out the trail’s biggest berm, dig out a long buried drainage exit, and assemble a collection of rocks, pulled from a nearby wash. As construction of the berm began, first a large trench was cut along the top of the turn; From there, the trench was loaded up with chunks of reclaimed concrete; All of the dirt for the berm’s creation came from here; 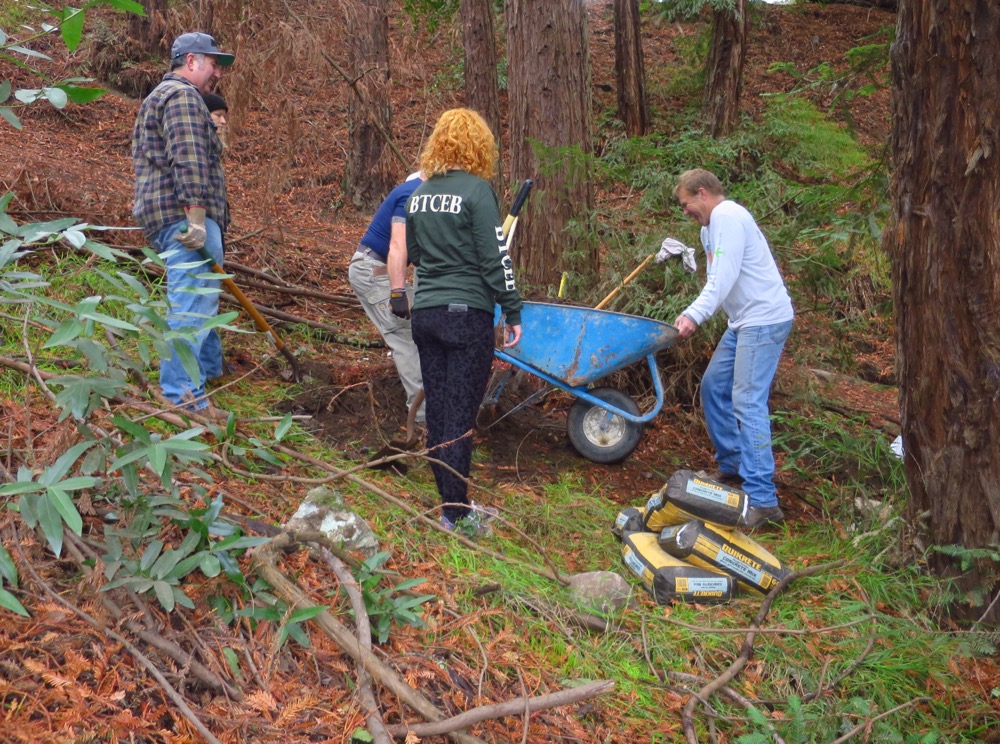 And was pretty much taken care of by these two; In a small compilation of images and descriptions I included over on the Instant Grahams, I described why these two were standing in a hole, which read just exactly like this;

This part of today’s job was pretty insane. Along with the new berm and other odds and ends we got into, a fair amount of erosion control was taken care of. A bulk of said erosion control occurred in this here pit. To find the culvert pipe’s buried end, (seen behind Diana’s right foot) the fella who oversaw the project apparently drilled a hole into a lacrosse ball, tied a string to it, and fed it into a storm drain up on the road. Marking and then measuring the string, he then surmised where the culvert ended. A hole was dug, and lo and behold, four feet down, there it was. Millions of gallons of rain water will now be directed into a wash adjacent to the trail and eventually into the creek in the valley. These two did a lion’s share of the rock and dirt removal, and helped to ensure most of the other work that was done today won’t get washed away.

As we began nearing some semblance of completion, there was still a bit of final detail work to address. and testing some lines; Finally, we lined the drainage pit with flat chunks of cement, and Quikrete and then sat back a bit to admire our handiwork; For the most part, all that’s left to do is to cover up the exposed preexisting gully/trail/drainage/path, and then wait until spring to see what the winter brought to us to fix.

Just out of curiosity, under rainy skies I returned to the scene of the crime to make sure everything was still intact and indeed it was; 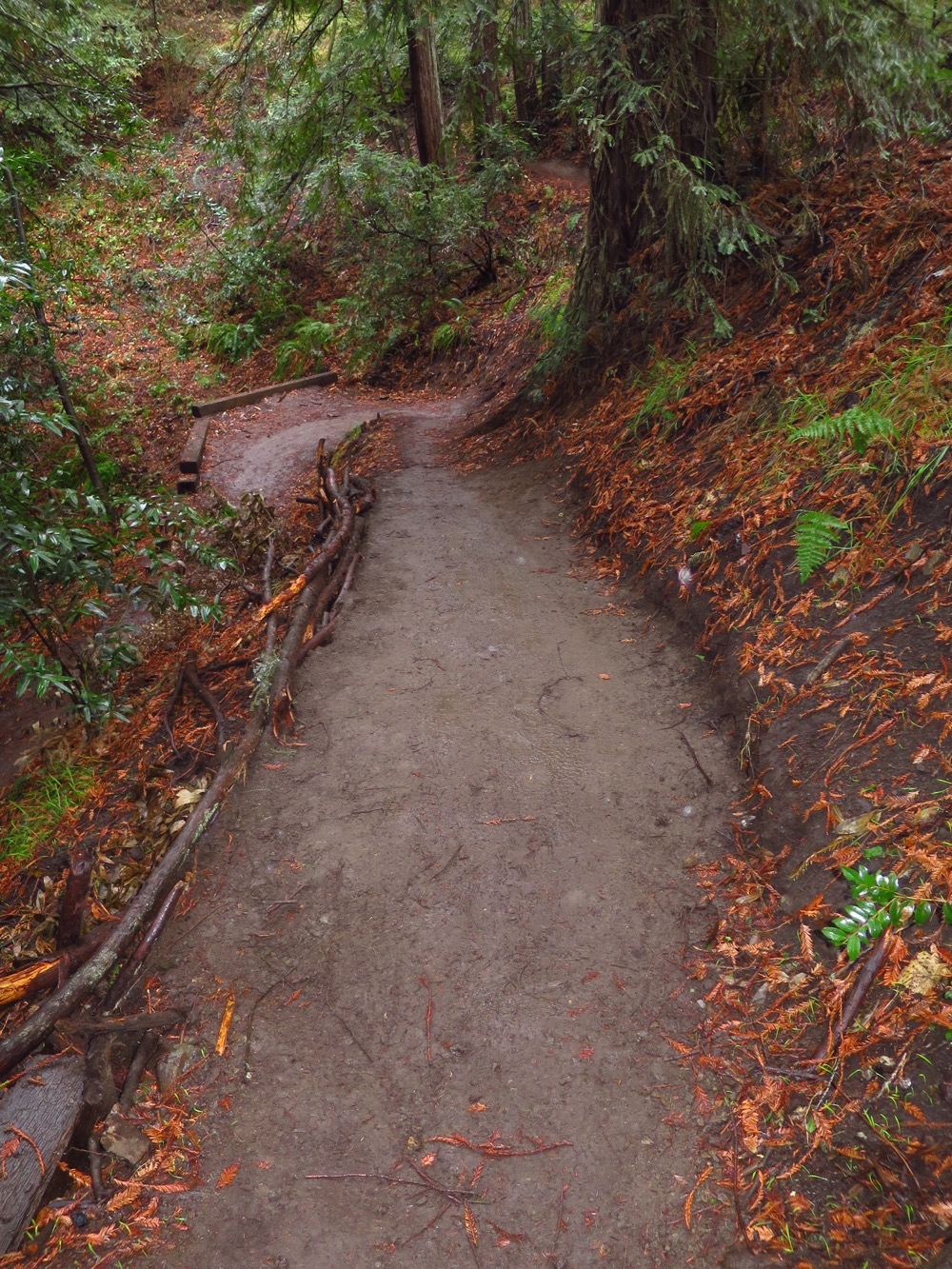 As I’ve contended before, it’s my dream that all of us spend even a fraction of time helping to develop and maintain the trails that we so frequently enjoy. Once winter loosens its grip, (except for those in Australia), find your own BTCEB, and keep your ears to the ground for local trail days. Digging in the dirt is fun, you’ll look like a hero in the eyes of your peers, and you can rest easy knowing that the health and well being of your local network is resting safely in your hands.

In news of an entirely different kind of winter preparation, Laura from Maximo Supremo residents Soulrun got in touch with hers;

Hey Stevil!
I hope all is going awesome with you! Our collaborative bike shop apron is in the works and should be all done very soon, just in time for the holidays. They’re gonna look so good! Can’t wait.
I was wondering if I might ask you a huge favor? I don’t know if you remember me mentioning my friend Whit Johnson of Meriwether Cycles and fat bike builder extraordinaire; Well, since we get so much snow here in Nederland I was looking for a fat bike with a wider tire but that would also handle more like a mtn bike. Sure enough Whit (who may be one of nicest people on earth) made me a fat bike that has brought great joy to my life since it arrived. I couldn’t help but share it with you! Whit is such a pleasure to work with and his bikes are a thing of beauty; 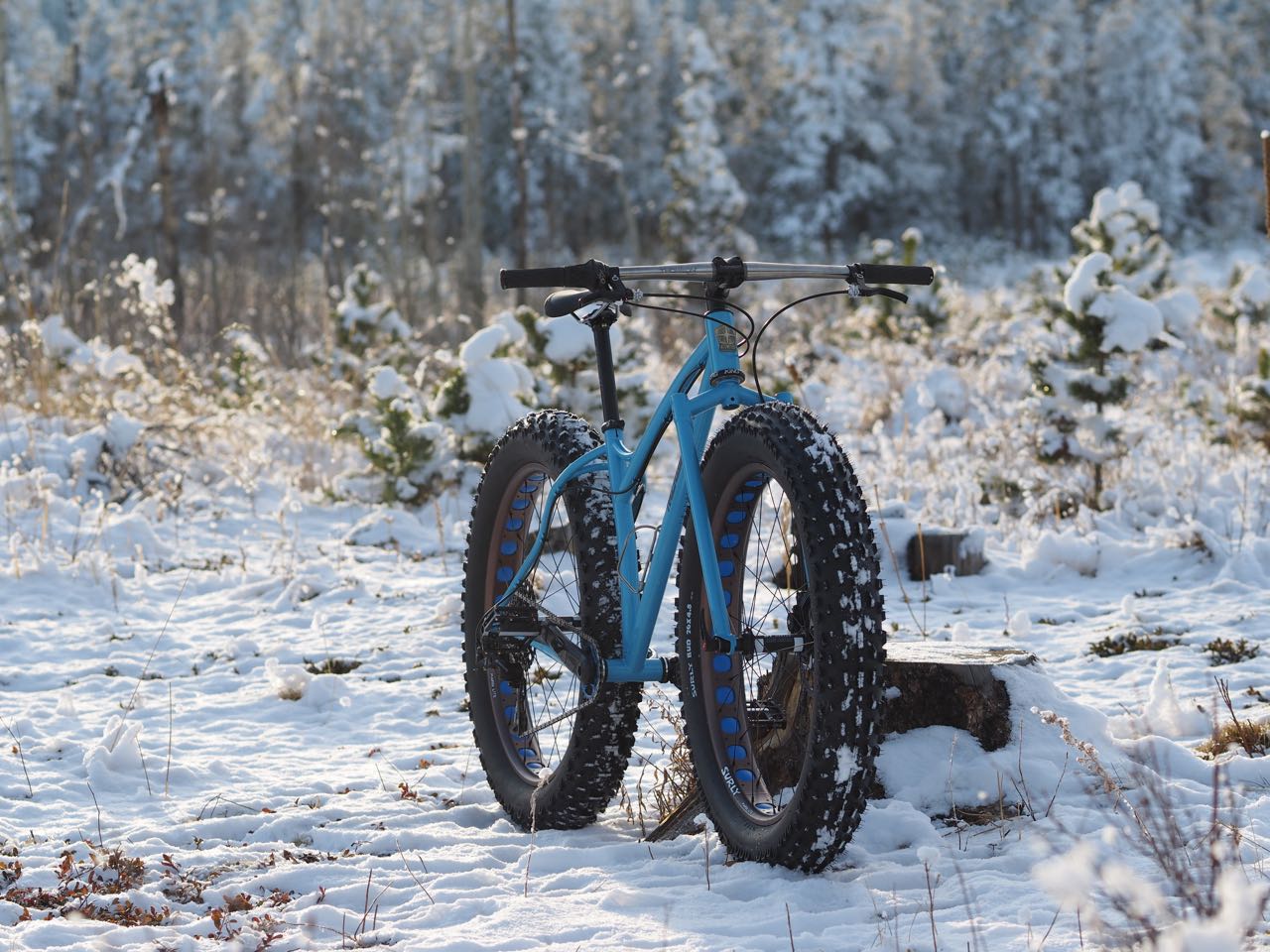 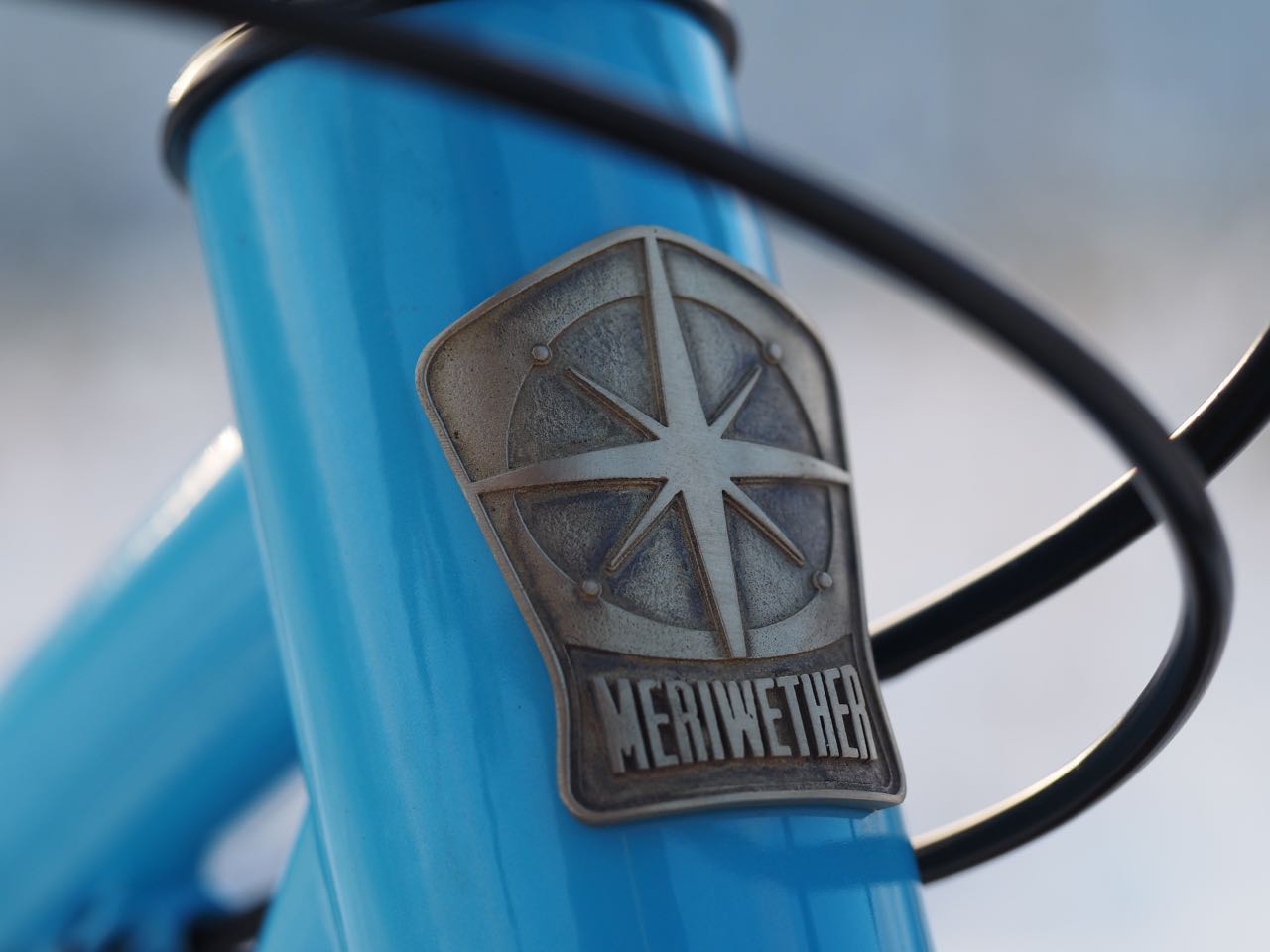 Sooo I was wondering if you might give him mention on AHTBM? if not no worries!! I just had to share with you.:) Thanks Stevil!

That thing is just ridiculously pretty, and I thank Laura for sharing it with us.

Kinda makes me want to order a new bike, but everybody knows that would just be stupid. Or necessary. Or stupidly necessary.

Finally, my old homie Brian made with the contact in the form of a cautionary tale;

I’ll be using a standing desk from now on… Especially since they say sitting is the new smoking.

I read that, and I think this; One time I was using a yoga ball to sit on as I did my daily desk chores, and at one point I stood up to open the window behind my computer or something, and when I did, my chair rolled away from me, resulting in me hitting the floor when I went to sit down again.

But a thousand times over I’d rather that happen that that described in the link Brian sent.

That stirred up a storm of anxieties within me- The kind that I can safely say are of the shit variety.

3 Responses to “As the storms roll in.”