Well, I suppose it can go without saying, (because I kinda did on Monday), that Sally and I made it deep into BC with little to no trouble at all. Of course the primary objective was to attend Kona Bicycles’ 2016 launch of their 2017 line of bikecycles in the stunningly lovely environs of Squamish, British Columbia.

This being my first time ever this deep into the BC, I will go ahead and say what everyone else always does in that it is a fantastically beautiful place. I’ll also mention that the riding here has left my backside ever so puckered. But we’ll get into that eventually.

First things first though. The bikes that Kona have available this year are exceeding all expectations. Over the last seven years I’ve watched the Kona team design, produce, and promote a line that only gets better with every generation.

Certainly, finally taking the leap and buying my very own Hei Hei should at the very least stand as a testament to the general level of ass-kickingness.

Anyway, as the dealers and a smattering of media assembled to take it all in, the effort and aforementioned ass-kickingness was fairly well apparent to anyone who had eyeballs.

Some standouts (to my mind) were as follows.

Back whenever it was initially released, I was a real big fan of the Rove. A big tired cross/road/touring bike, no matter what the flavor is always a thing that will achieve a fast track to my heart. Naturally, when you trim it out with bells, whistles, and build the frame out of titanium however, you get a bike that’s a straight up and down pants ripper; As one might expect, the ti Rove just comes as a frame only so you can drip it with whatever bells and/or whistles you want.

If a fully built, and slightly less bank-breakable steed of kinda the same flavor strikes your fancy, then the 2017 Sutra Ltd is another of the new line that stuck the hell out of my fancy as well; As a matter of fact, I took one of these out just yesterday onto some of the same trails that I rode a far better suited bike on the day before, and though it wasn’t pretty, I returned alive, and with one more additional tiny tough guy feather in my cap.

And as proof that I was in fact out there, I offer another glam shot; Of the bikes of a fatter tired variety, there of course were a number that caught my eye, but most surprisingly (because I care about fat bikes like I care about playing video games, which is to say not much), the Wozo caught my attention and held it tightly; For the attentive among us, this is the baby that was created when the Wo and the the Honzo got drunk and fooled around in the woods behind the post office.

It’s a union I support. As near as I understand, and because there are so many Hei Heis in the collection this year, this is more or less the same as my bike kinda, only with the exception that it’s made of carbonium. Just the same, I still think it’s pretty wiz-bangy though.

About a month ago, Caleb (Kona’s communications impresario), pictured here; -contacted me to ask what bikes I’d like to ride. Because I was now intimately familiar with the Hei Hei I noted that I’d like to give the Process 111 a rip. After the first day’s meeting, (which looked like this); -the lot of us adjourned to go find bikes for us to ride; 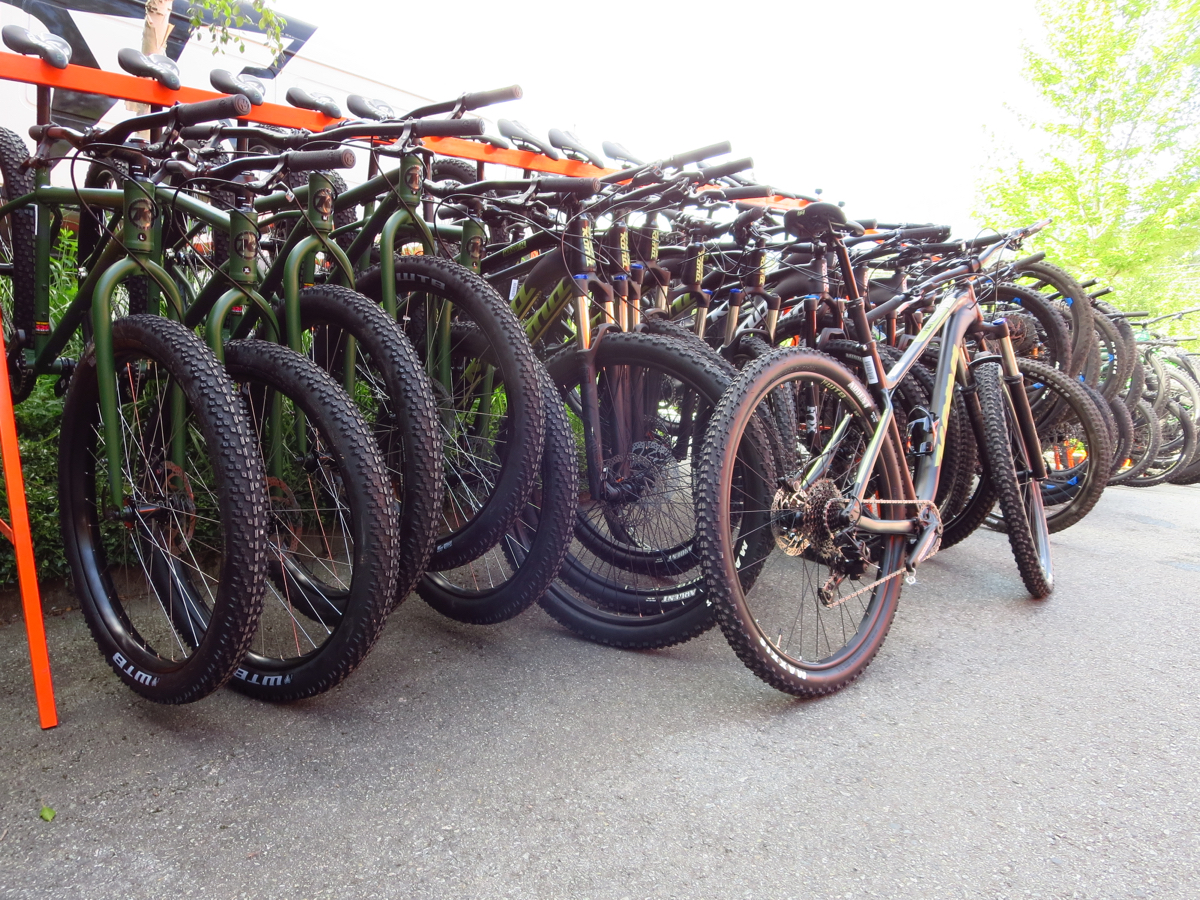 There happened to be a few.

Because I was kinda slow getting to the bike pile area, my Process wasn’t there, and just as I was looking for an alternative a fellow rolled up and offered me a large Hei Hei Trail DL which I took without hesitation.

Because I’m bad at my job I forgot to take a woodsy photo of the bike, so instead I will offer you a photo of James aboard the same bike, doing his best “did you just say what I think you said?” face; So it was with that that Sally and I rode off into the woods together to get a sample of what Squamish had to offer, and it turns out that BC trails are exactly how they look in the videos and magazines; 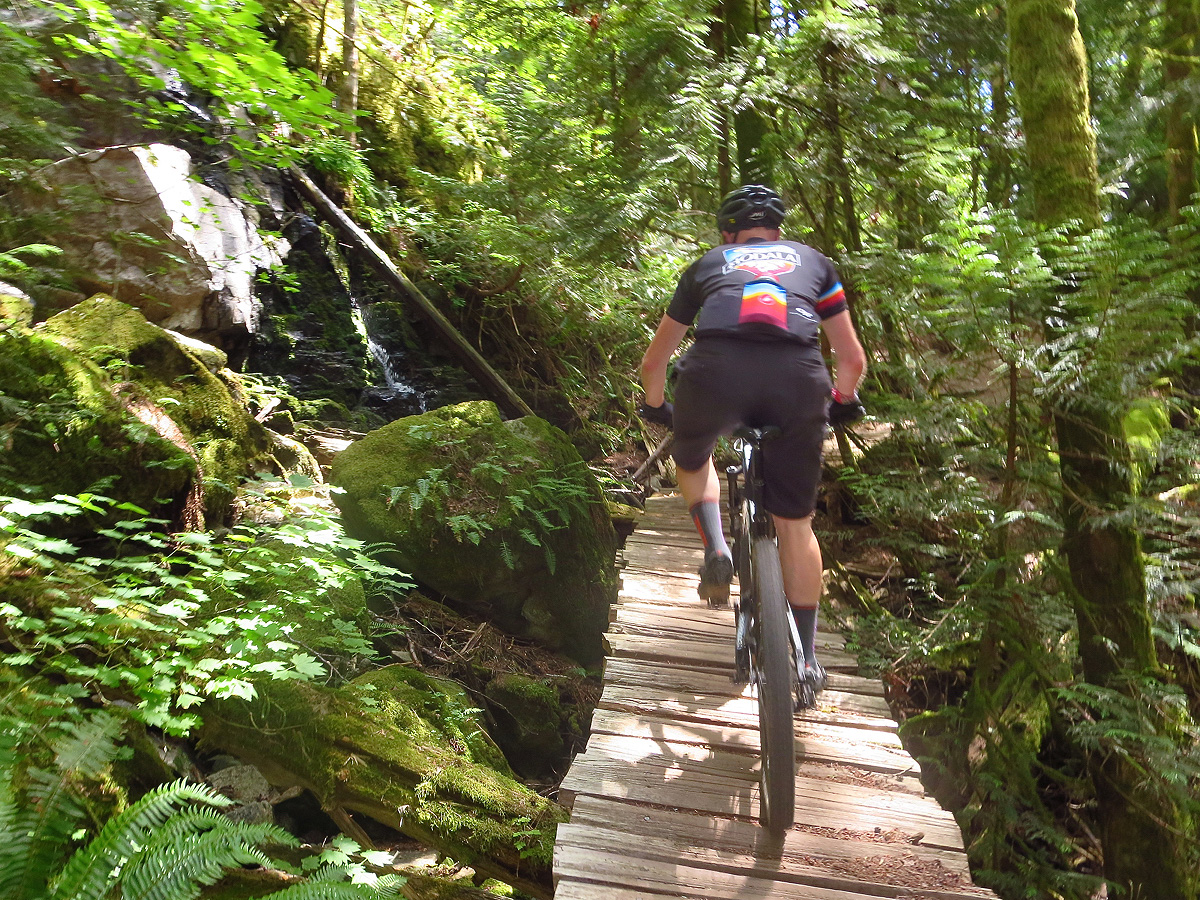 That is to say stupidly fun, and at times, stupidly scary.

With that, I’ll sign off until Friday when we will have the conclusion of hashtagKonaRide2017 and we’ll discuss matters regarding life vests, vertigo, soiled skivvies, and bike blogger douchebags (same diff) with ruptured ear drums.

Sometimes shenanigans will result in a thing a fair bit worse that a simple pistol whipping.

3 Responses to “So many shenanigans.”