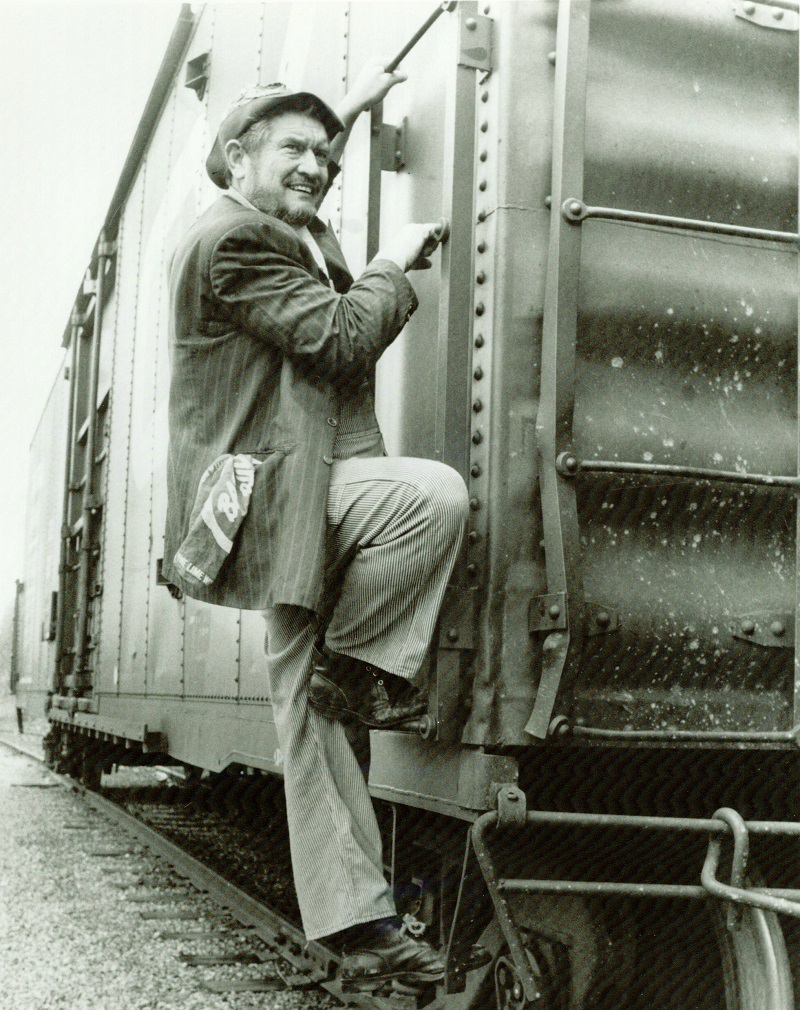 Anyhow, though I’m traveling not by rail, but by air, and will have luggage more substancial than a stick with a bandana tied to it, by the time you read this, I will be making my way to points east and all things Interbike related.

Because I’ve spent the better part of the weekend involved in matters relating to varying degrees of home improvement; 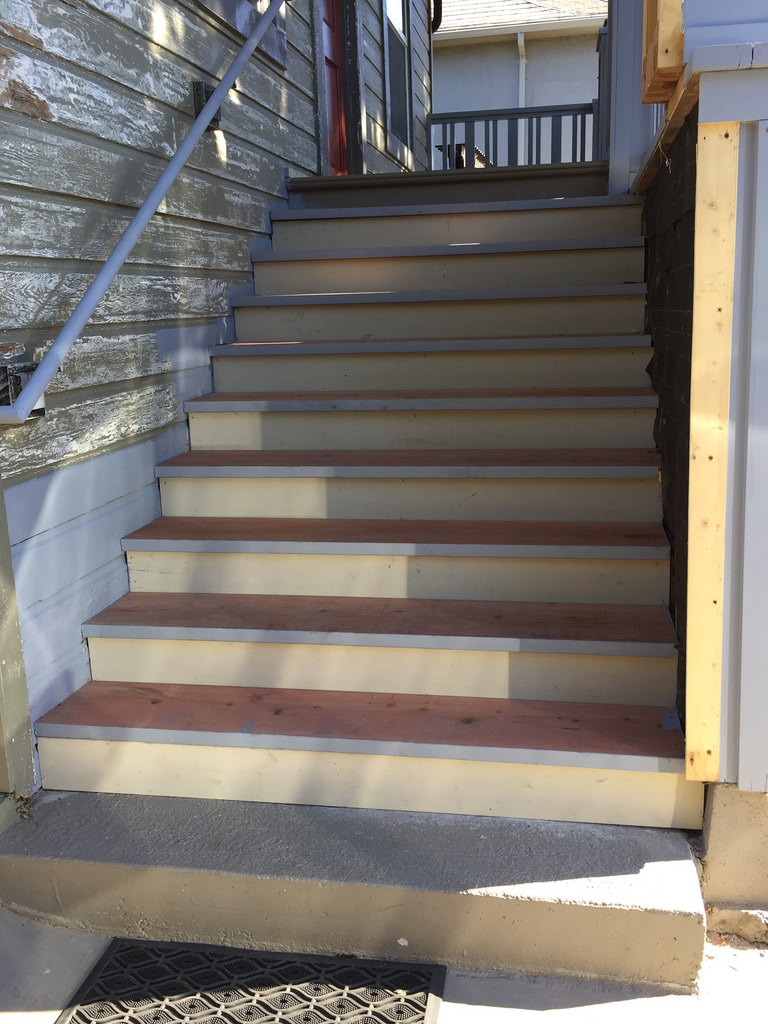 (Them is some real nice stair, what replaces about 1000 pounds of dry rot.)

-I didn’t have much additional gas in my tank to fart out a suitable post.

Luckily, I have an ace up my sleeve who goes my the name Carolyn. She pulls the weight when I cannot, is the wind beneath our collective wings, and has the adventures when the rest of us are without.

Recently she did just that, which reads like so;

What’s good?
I feel inclined to give you an update on my current day to day. Be prepared for the longhaul….

On August 12th, my job ended and I fled the property. Good folk, we spent a couple nights in the treetops (35ft high platform) to wake up covered in dew, with harness wedgies; Did I Irish goodbye the shit out my departure?… Maybe. We have the internet, bridges can’t seem to be burned the same way they used to be.

An uneventful, dog-sitting weekend passed. Monday, I returned to my homebase in Rochester on Monday with a customary visit to; I swear, every time, I find myself in one of these fine establishments.

(I) cooked up some paella for the mates and talked god, politics, and sex (TABOOOO) over some tasty wine. Stupendous company. (No I don’t take photos of my food… Who do you think I am?)

My friends arrived in Roch at 4am Tuesday, we loaded the car and headed east; We spent some time in grand ol’ Chicago; I got another sticky poke; Why, yes that is a specimen jar containing a preserved parasitic worm. There is a story… Another time.

One Wednesday a month. ‘Electro-swing’ is like my new “let’s get stoned and go dancing’ music; At this point, you need some back story… That there is Lia and Demetrius. Marvelous folk, Lia snagged a teaching job at one of the best high schools in Beijing. Demetrius is a radio host. They are married. They needed to go to Chicago to apply for visas at the Chinese Consulate… Hella bureaucratic process. Initially, I was joining them to appreciate their presence before sending them off wayyy east. Then, I found myself taking a ticket number at the consulate office.

We left Chicago Thursday, after a few pit-stops in small town Iowa, Friday, I arrived to my other homebase in LNK. Picked up a nice, gently used box from MWC in the deep hours of the night. Packed the bici, and meticulously weighed luggage. Spent time with family and cherished the favourites of my hometown. Coincidentally, Gravel Worlds was happening….[(didn’t even notice until I was surfing social media simultaneously, debating internally if the new Radiohead album was trash or not while waiting in line. (have you thought of extending another tentacle of AHTBM to the spotifies?)]

*Editor’s note- No I have not.

Anyway, My flight was scheduled for Monday morning, 8am sharp. ETA at the airport was 6:00am. I woke up at 6:20am. Frantic shuffling and phone calls. A smile and a hair flip later (mostly shear luck and kindness), I was set to fly out later that afternoon. Not all heroes wear capes and James, the AA rep is one of them. I then relaxed and went to a token midwestern diner in the heart of Omaha. Pre-flight La Croix…how MWC of me; -And a silly layover in Chicago because a bird flew into one of the engines of the plane i was to board. My mid-flight bathroom selfie game is getting on point; 17 hours of travel time (did I mention international flights come with complementary booze?) and over the North Pole, I arrived in China. I have been here a month. China’s conflict with anything in relation to Google is deeply frustrating, which has delayed this message.

This has been my most challenging, spontaneous and brave adventure to date. I know three things: 1) My support system including my family, and friends is absolutely tremendous 2) Cycling culture and the bicycle community have been a stellar comfort and source to find solid comrades and 3) bicycles continue to be the best form of experiencing a new place.

Here’s to perfecting my blank stare when being addressed by someone in a foreign language.
Here’s to not giving in and getting a Tinder as a means to meet people in this massive place.
Here’s to figuring out what the fuck this means and being able to order some tasty, tasties; Here’s to spending time getting to know the noodle lady and shop owners in my hu tong (‘alley’) behind my flat.

Here’s to teaching a bunch of youngsters English; That’s Lauren. She had conjunctivitis; Did my boss grant me the privilege to give my students English names? Yes and what power did they bestow. Am I the rightful giver of these English names, which might remain with them the rest of their beautiful lives? This is a question that has plagued me in the deepest hours of the night.

Here is Maxine. My favourite, I adore her. Teachers have favourites… always; -And to end, my friend, know that I am I getting on and have thus far not been hit by any of the assorted moving objects I share what seems to be the never ending pavement of one of the largest and oldest cities in world. This black tee, those bumpacks, very fresh, so clean; P.S. Note: I live 14 hours ahead, thus disrupting all sorts of communication and my normal morning coffee routine of scrolling through npr.org and AHTBM. Tsk.

So here are a couple of points I’d like to make- Firstly, I went through Carolyn’s entire email, resizing and re-titling each photo because I think secretly she thought I would not. Secondly, I did so because I think that her perspective and experiences are relevant to this here readership.

She is a thoughtful satellite out there somewhere, and I genuinely appreciate her taking the time to keep us here back home (‘home’ being this here digital meeting place) abreast of her comings and goings.

As I stand at my desk with one sock on, one sock not, and my pants sagging just above my ass, my brain projects me to her side, and if only for a moment, together we can take on the world.

And really, isn’t that the beauty of this website and the directive we’ve developed?

I certainly think so.

In a couple of remaining matters that we have to address, I’ll make mention of the Bay Area’s upcoming PBR art show featuring regional art maker types.

The powers that be asked a couple of weeks ago if I’d like AHTBM on the flyer. “Hell yeah” I said. “I’ve been hustling this for weeks, and have lined up some truly talented individuals. Naturally I’d like to get a little bit of traction out of the deal.” Ask and you shall not necessarily receive.

At least on the night of the reception, I’ll maybe get some free beer out of the deal.

Lastly, I’ll take a final opportunity to once again let any and all who might be interested know that this Thursday is the eighth annual Underbike Industry Mixer;

After a year of organizing this, ultimately bringing HiFi Components, and VYNL Race Bikes on board as co-conspirators, it’s hard to believe that the day is almost upon us; But believe it I will, and as I head towards the horizon with most of my worldly possessions slung over my back, I declare that I will see you there, or in the event that I won’t, it’ll be back here on Monday the 26th.

Boxcar Willie insists on it.

3 Responses to “With my hobo sack loaded up, I’m outta here.”