Today I’m gonna kick things off with a rehash of some information I recently shared on the Instant Grahams. As most anyone knows me know, I’m a big fan of playing in the woods. People also might know that I realize playing in the woods comes with the price of sweat equity. I know that trails don’t develop and maintain themselves, and that is why not only do I encourage folks to engage with their own land management organizations and trail stewardship, but with some frequency, put my money where my mouth is and engage in it in my very own backyard.

So I was happy when Yafro contacted me the other day and mentioned that there was going to be an informal trail day on Monday during which we were going to clear two trees that had fallen during recent storms.

Once on the hill we were met by three other trail volunteers, and the head cheese from The Bicycle Trails Council of the East Bay. Together we meandered into the woods loaded down with an assortment of tools and a drive not to die.

The first tree we came across was a biggie with a nearly inverted rootball, which once a cut was made, I wasn’t entirely sure wouldn’t topple over and kill all of us; Thankfully I wasn’t in charge, and because of that fact, no one did; 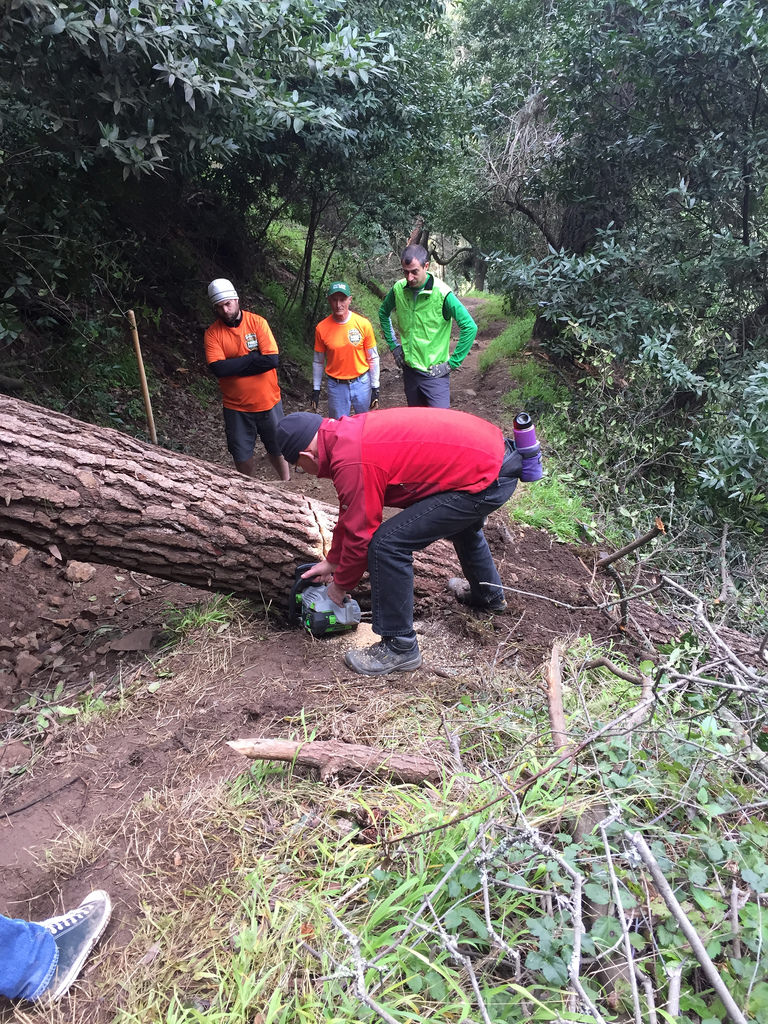 With a little bit of hacking to clean up the trail just this side of the fall, we basically had a brand new trail.

Moving on, we then made our way to another location not far away where we were met with another behemoth; 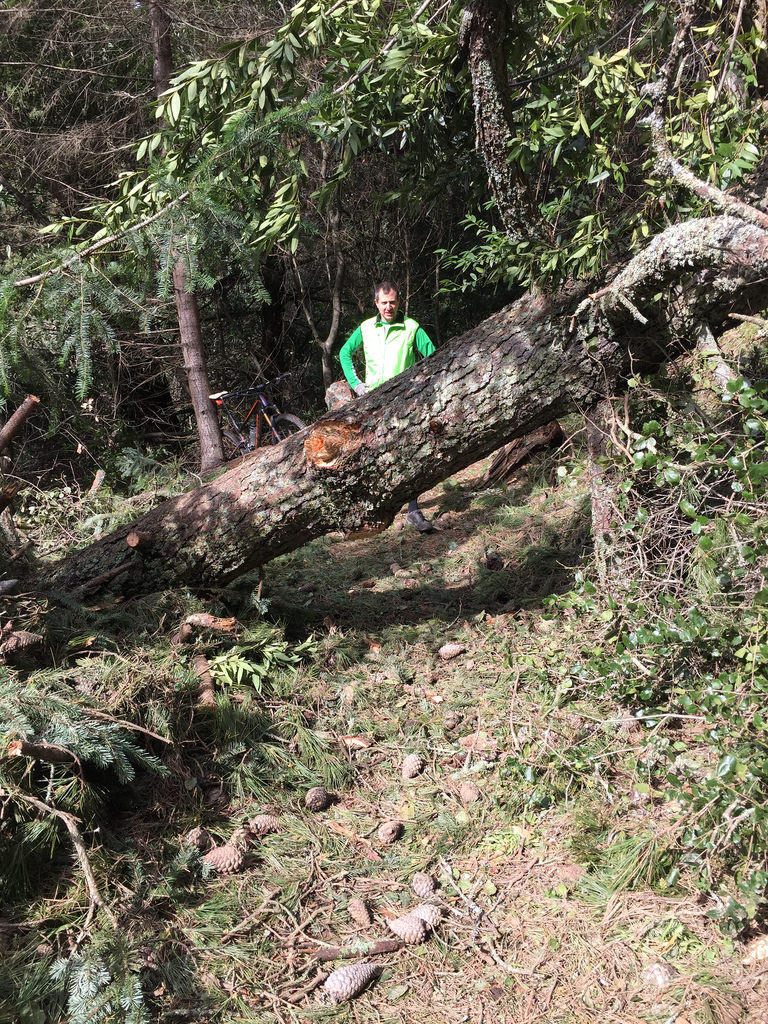 Which we also made reasonably quick work of; I understand these marked the seventh and seventy-first trees removed by this group of volunteers since December. They are good people, (some hikers, some mountain bikers) who care very deeply about the well being of their local open space and I’m proud to be able to periodically work with them.

If by chance you’d like to link in with a good Instagram account to either check on local trail conditions, or simply to get a load of some real beautiful photos of our backyard spread, then might I suggest you follow Oakland Park Patrol.

Circling back around to things folks do or don’t know about me- Another thing you might or might not know is that when people neglect, or abuse these places that I love, it sends me into a murderous rage.

Case in point is a thing I first came across a couple of years ago. It would seem as though a local high school holds an annual cross country running race in the park, and two years ago went about spray painting any exposed rock, root, railroad tie, exposed branch, or any other perceived hazard they came across.

This of course made me quite upset, but after a year and a half most of the evidence of their slight was erased.

That is until this year when the event was held again, and they went even bigger; These are but two examples among dozens I’ve seen that they’re responsible for.

They claim to be using water soluble paint, but after two weeks of rain, this is the current condition.

Thankfully Stan (who manages the aforementioned Oakland Park Patrol feed) actually came across the offenders in the act and took swift action against them. Clearly his cooler head prevailed, as he’s not currently incarcerated with charges of grievous bodily harm. The park district has been notified, and they told the school to cut it the fuck out, (at least that’s how I hope they put it), and we can all hopefully enjoy many more days of non-spray paint covered woodlands.

Moving on from the good, bad and ugly to products that we wish existed, but don’t, last week I mentioned the new Tapatio sweatshirt; And now today I come to find out that they have a ceramic coffee mug to boot; I would want all of that stuff, if it actually existed the way I wished for it to.

Like Mick Jagger said that one time so long ago, and a billion times since, you can’t always get what you want.

But then again, sometimes you can, and recently I did when I got a care package from the good souls of Sausage Skateboards; I’m debating on whether to build this up, or to simply ad it to my collection which will perhaps one day be on display at the Whitney.

If you’d like one for yourself, (or its popsicle shaped cousin), you can rest easy knowing you’re not only supporting an independently owned and operated business, but you’re proudly repping some good hearted Seattle dirtbags at the same time.

That right there is a double win.

Lastly well now get into some mountain bike cycling types of stuff from our friends at Kona in an email from Caleb that reads like so;

Thanks a ton for sharing the Wozo video last week.

Now here is a sweet little video of Connor Fearon getting after it at Retallack Lodge on board our new Hei Hei Trail (you know the bike that you rode at the launch, well I hope you did!)

All too often we can get sucked into the same old habits. Same trails, same bike, same everything. Sometimes you’ve got to get out of the box. Live a little. Breathe. And then shred.

Hei Hei Trail is an out of the box thinker, like many of Kona’s bikes. Everyone who swings a leg over one notes that it outrides its numbers, surpassing their expectations of a trail bike’s capabilities. Light and efficient with its full carbon frame and Fuse suspension design, snappy and playful on the way back down; 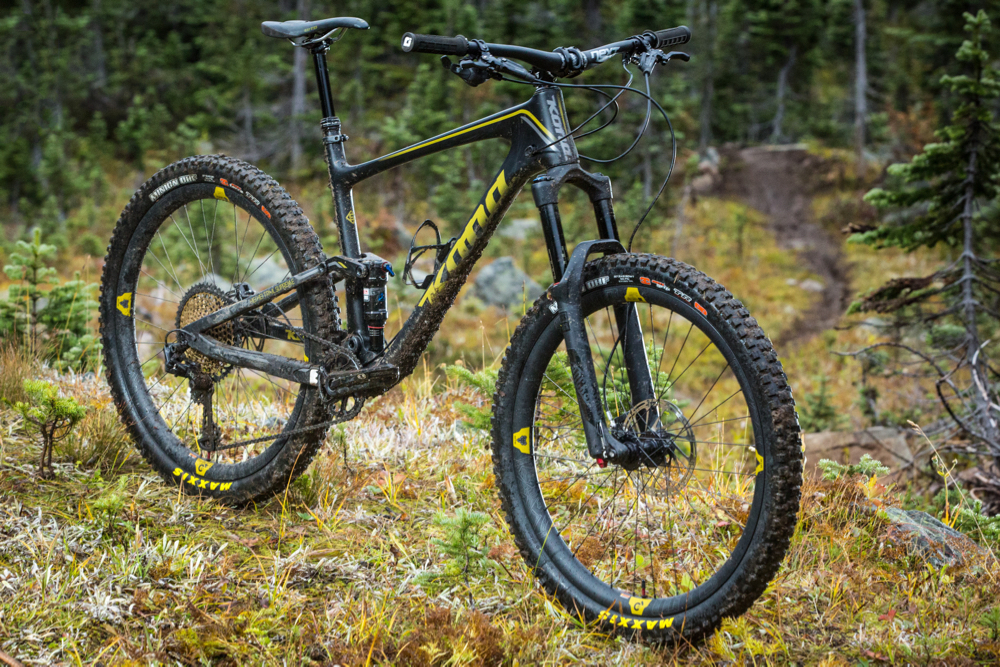 We sent World Cup downhiller Connor Fearon into British Columbia’s Selkirk Mountains with the Hei Hei Trail. And what we came out with was exactly the proof we needed that this bike doesn’t belong in the box, but up in the hills, getting loose; We tend to think you’ll agree;

All three Hei Hei Trail models feature the same Kona Race Light full carbon frame. From the top-spec Hei Hei Trail Supreme through the Hei Hei Trail DL and the Hei Hei Trail, you can expect to find wide rims, great tires, and high quality suspension components. No matter which model you choose, you can be assured it’ll be ready to shred right out of the box.

All of our love,
Caleb

Everything he said is true. I did ride the bike in question, and it was a gas.

Secondly, I spent my very own hard earned money on a 29er Hei Hei Race, which I put a longer travel fork on effectively making it a Hei Hei Trail, and it’s the funnest mountain bike I’ve ever ridden.

Lastly, I lied about everything he said being true.

The ‘all of our love‘ part at the conclusion of his communication was added by me.

In conclusion, I adore Kona. I adore their bikes, and the fact that they thought to include The Hellacopters‘ ‘Action de Grâce‘ as a soundtrack to that particular clip makes that adoration expand to the point where it, dare I say, bubbles over.

4 Responses to “Bubbling into Wednesday.”