Did you know Brutus The Younger was involved in the assassination of Julius Caesar?

Do you think that one of his co-conspirators (probably named Cletus The Silver-Tounged) uttered the phrase I used for today’s post title, as they flipped their togas around and shuffled off across the sandy floors, their sandals clacking against the bottom of their feet as they strode, forever cementing the phrase into the hearts and minds of generations that followed?

Good day to you and yinzes.

The rains have returned to the Bay Area, and as of yet, my cave is warm and dry.

I can’t begin to say how much I appreciate being able to say that.

And as I mentioned on Monday, not only have I been futzing around down there cleaning up, reorganizing, listing to music, and actually assembling a sort of library out of my collection of random pertinent media, and assorted fanzines; If you’d like to swing by, take a sit, and pour over some xeroxed mayhem, give my secretary a call.

-But more importantly, or not, I christened the shop side of things with the completion of my Stuntman build; 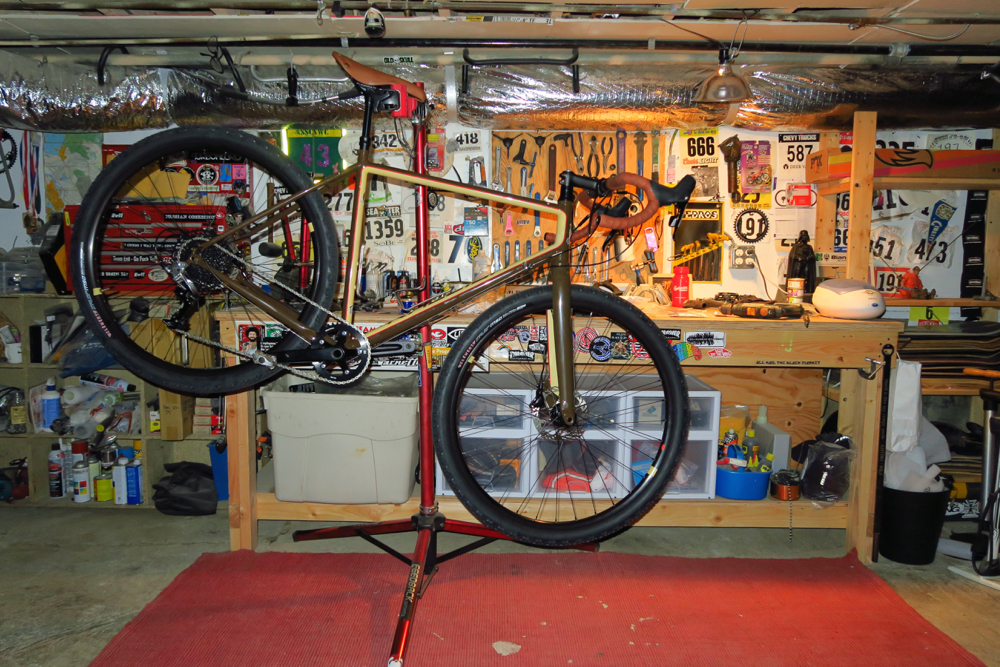 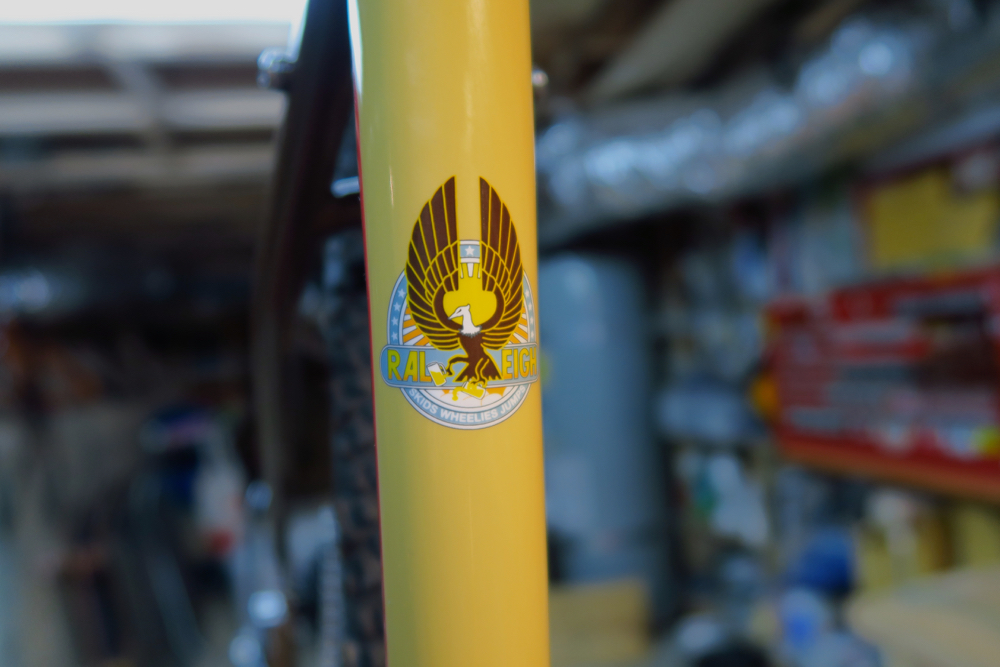 I also mentioned on Monday that I had a small hand in the development of said bike, which I will share with you now.

At some point during the fall of 2009, Sally contacted me and pitched the idea of an AHTBM branded bike. Previous to this, Raleigh had done a couple of runs of branded bikes for Macaframa, so the concept was an easy thing for them to attack.

Being that I’d just launched this site, I thought the idea of doing a bike before I’d even cut my teeth developing my own product line was a bit presumptuous, so I tucked the offer into the back of my brain to revisit at a later date. Fast forward a couple of years, and we began discussing it again. Would we do a 29er? A cross bike? A town bike? And what would the theme be? A Trans Am? A tribute to Evel Knievel? A beat ass gold-ish Firebird, ala James Rockford?; 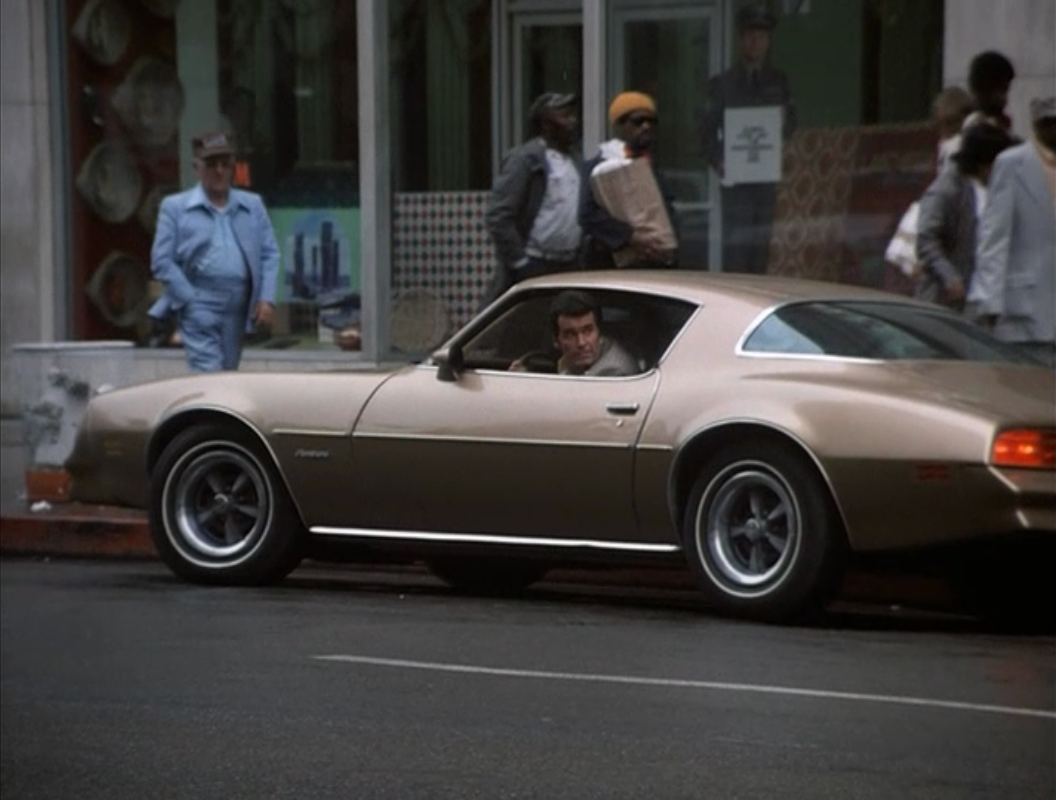 I didn’t know, and nothing felt right, so a few more years passed.

Then, about two years ago it clicked. I wanted to do a branded bike that was a tribute to Colt Seavers’ GMC K-25 from the hit television show ‘The Fall Guy’. 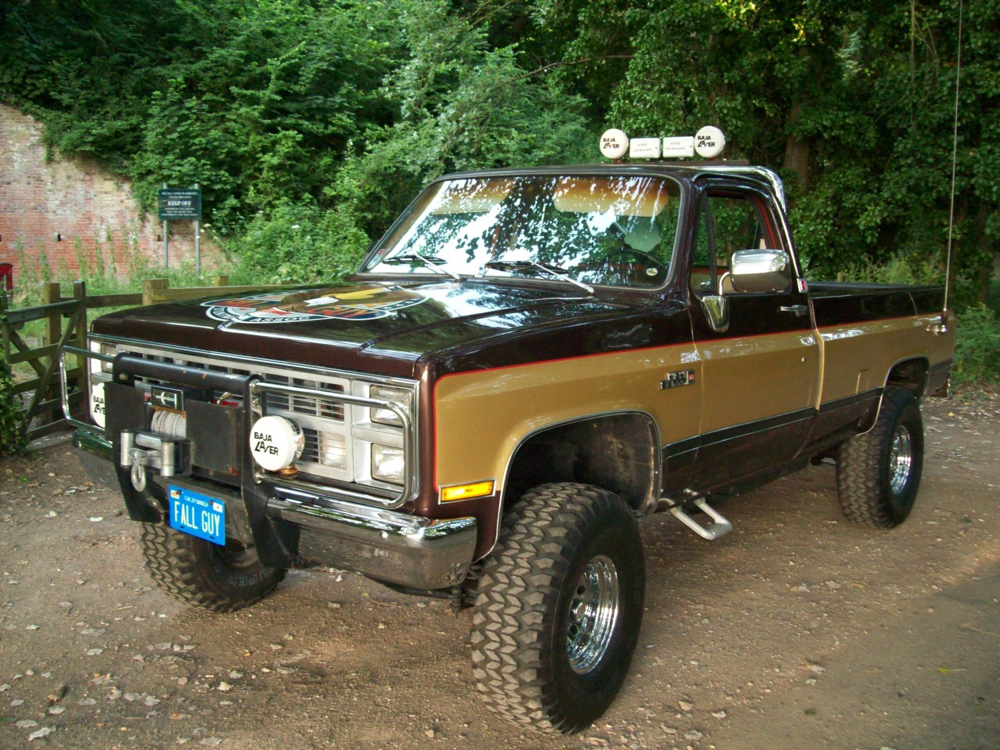 Duh. I mean, I have no reasonable explanation why it didn’t occur to me sooner.

So he came to the Bay Area, and because I’d just been injured, the two of us spent the weekend on the sofa drinking beer and watching old Fall Guy episodes.

I had a number of ideas regarding what I wanted to see on the bike, but first things first, I knew that the paint scheme had to do the truck justice. Shortly after Sally’s visit, I received an email with a blank template, and I got cracking with a box of colored pencils, and a .005 Micron technical pen.

The following are what I came up with; 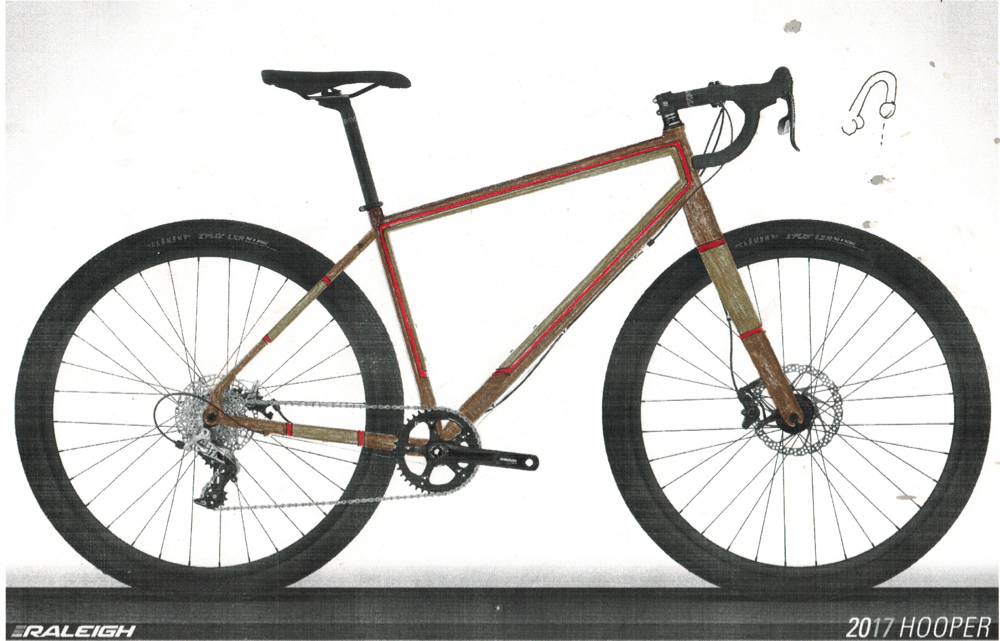 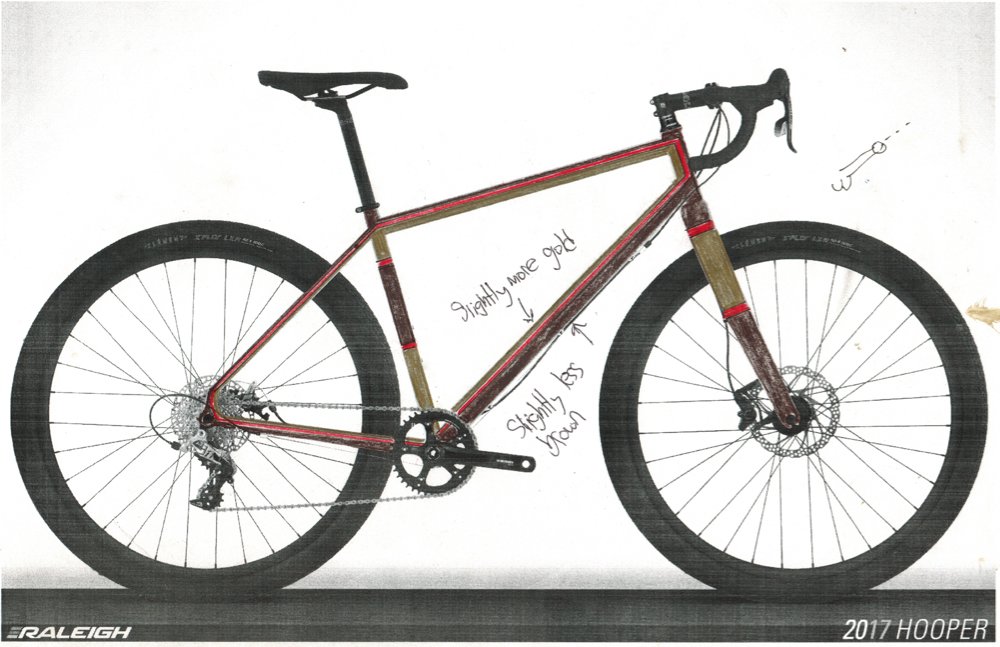 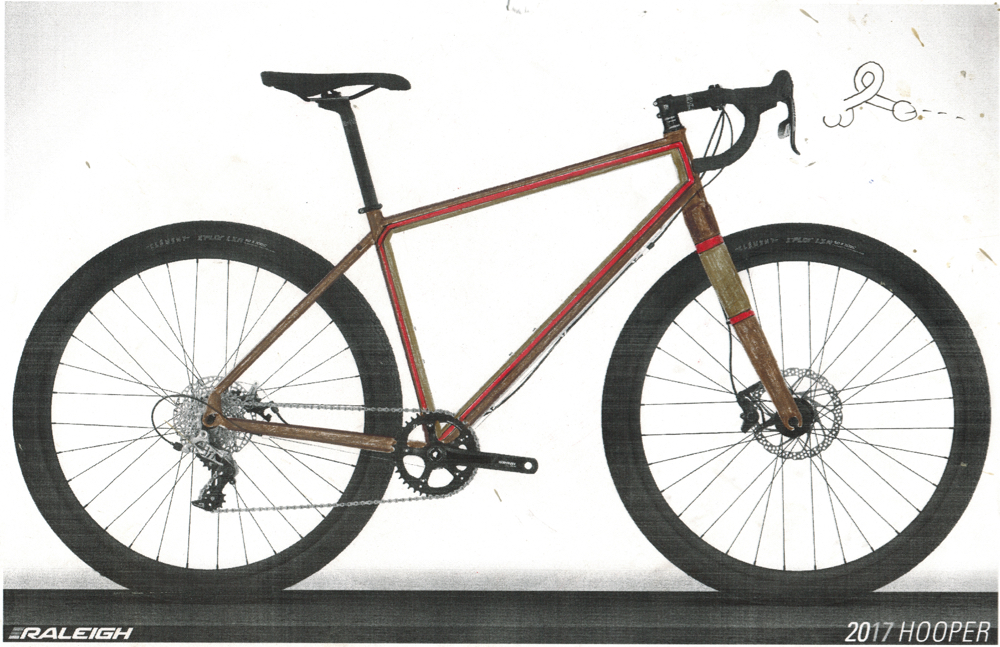 I think the various dong drawings indicated my general level of enthusiasm for the concept, and obviously the curly one was the very most, as that’s what was more or less ultimately produced; 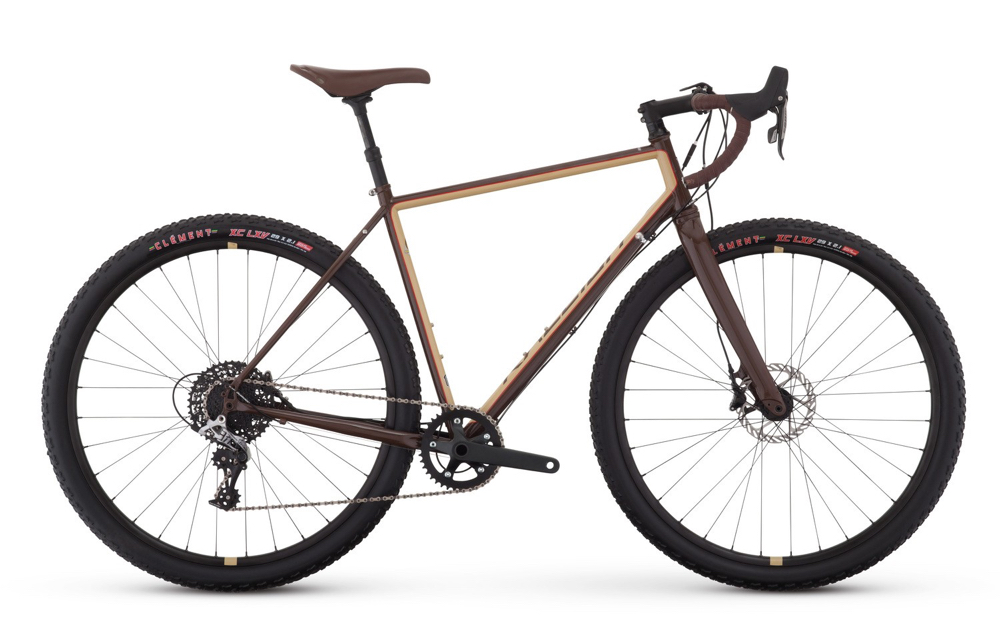 I will note that gold was replaced by tan by someone other than Sally or me, but that occurred after he was no longer in Raleigh Bikecycles’ employ. If you take exception to the amendment, which you should, I suggest you go scream at a wall.

The long and the short of it is, I’m really, really stoked with how it ended up coming out and am looking forward to a day when I’m not writing a post about it, but rather, am actually on top of it.

I’d like to once again announce, only because it’s kinda related to this, if by chance you’d be in the market for one of them AHTBM Stuntman Association jackets I did; 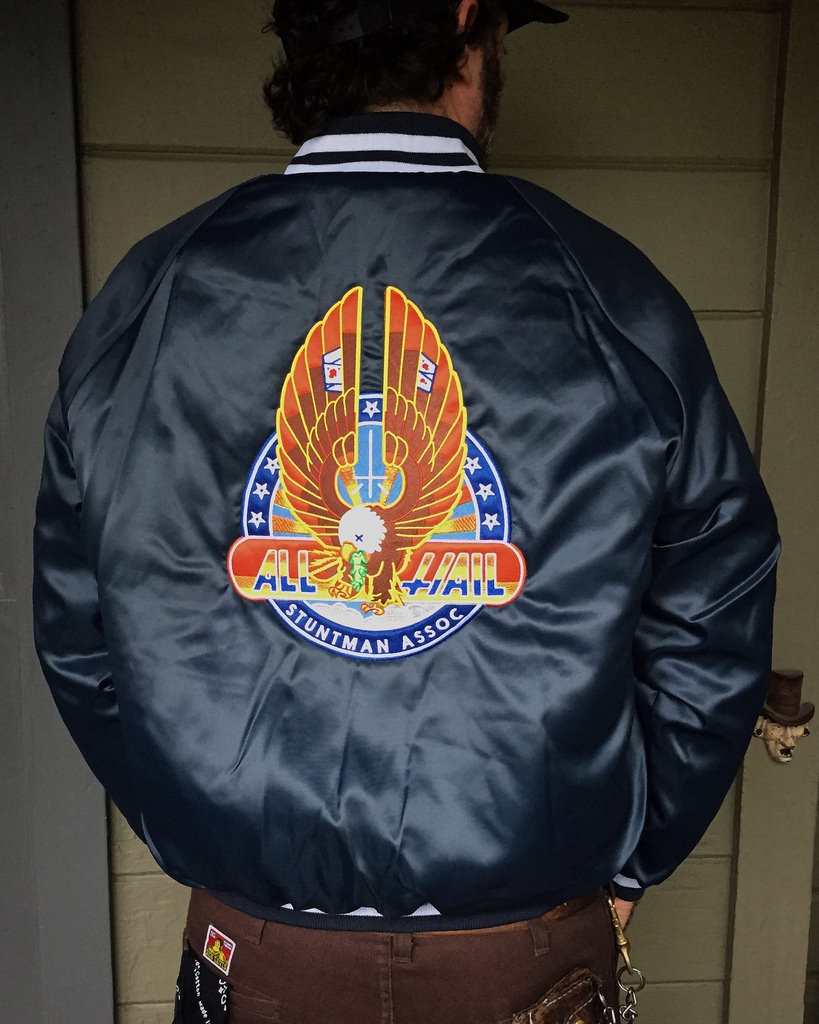 If you get your order in today, I can get it turned around in just a couple of weeks.

Because Colt, Howie and Jody would want it that way.

And in other news relating to AHTBM merch, to folks who are patiently awaiting the arrival of the new long sleeved Tchort shirt; 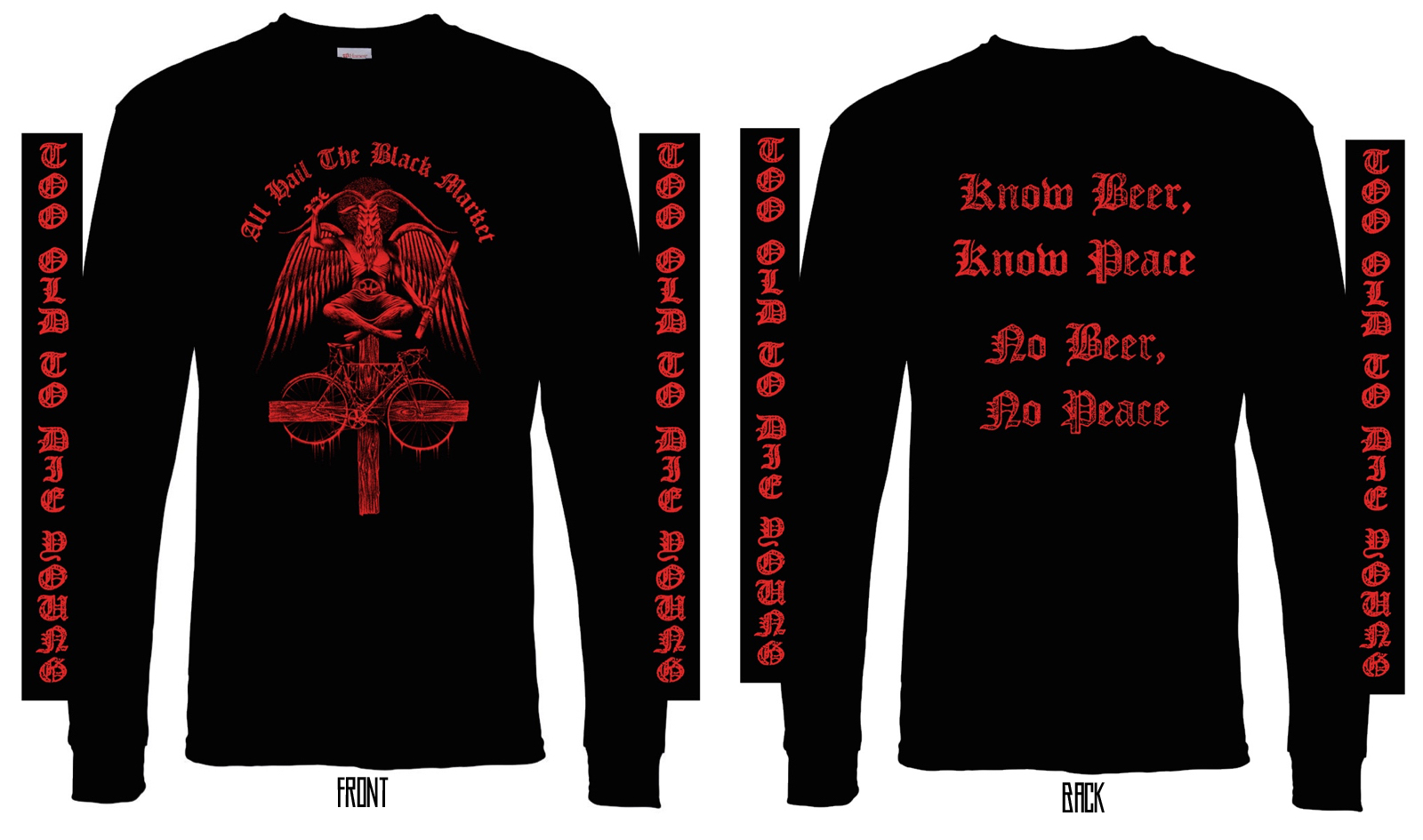 I’ve gotten word from the printer that they are coming along nicely. We had to jump through some hoops on screen size, and because this is a considerably more complicated production than a simple one screen shirt, and they cost a fair piece more, we wanted everything to be absolutely perfect. I appreciate people’s patience with the process, and I promise to get them out within a day or so of picking them up. I can guarantee with 99.666% certainty that they won’t disappoint.

So thank you one and all for your pending, current, past orders, and what have you.

Brutus mighta been The Younger, and Cletus The Silver-Tounged, but because of your support, and at least for the time being, I can continue to narrowly avoid being Stevil The Broke.