First up, since my new coozies are non-directional, the ‘front’ and ‘back’ labels are only a recommendation. It also is a new day in regards my my own technological advances, and though I am in the process of setting a store up, you can Pay Pal me $6.00 each for coozies as well as the stickers, to stevil@allhailtheblackmarket.com and you will get you your own.
(*Please note that it actually costs upwards to four dollars to ship internationally, so if you like, let me know before hand an I’ll try to get a proper dollar amount.)
Who knew it could be so easy?
A megalo high five to the drinker with a riding problem for the help in seeing this project through.
Now for the edible segment of today’s post. All behold the awesomeness that is Pizzilla;

What you don’t see under all of those glorious layers of toppings was the hidden assortment of Legos.
No, not really, but that would be a pretty sweet prank.
As a quasi-surprise for my substantially better half’s birthday, JMac and Tina B. rolled through bringing a special present. You see, my girl has a variety of random food allergies, and on our recent trip to Colorado she had the opportunity to eat one of Beau Jo’s gluten-free pizzas and has mentioned her unquenchable craving for another one ever since.
The aforementioned present was a selection of gluten-free pizza crusts from a specialty bakery in Oakland, which we preceded to pile high with every food item we had at our disposal, short of sardines and chocolate covered raisins, as we put away bottle after bottle of beer in the process.
And as an added bonus, we got a surprise visit from Simon of Western Spirit fame;

Of course waking up the following morning and getting him on the road again wasn’t such an easy process;

Now then, as long as I’m here plugging Western Spirit, I may as well direct you to the report I filed about the trip we took with them two years ago.
Hands down this was one of the greatest experiences of my life, and should you ever find yourselves bumbling around with the time and money for a vacation, and no clear idea of what to do, with no reservation whatsoever, I recommend you investigate their assortment of trips.
We also discussed getting back aboard one of their dream getaways next summer, which sounds like a pretty good plan to me, assuming I finally cross paths with my Daddy Warbucks. Otherwise I will have to resort to some dire tactics.
One way or another, I will prevail.
Enough about my dreams though. Let’s see what’s happening elsewhere in the world via the mail bag.
From Bill I got a heads up about the what’s what in Brooklyn;
“Stevil,
The bike doctor is moving out.
Glad to hear you’re still standing up and talking back.
Bill”
Firstly, I’d like to offer Bill thanks for the kind words regarding my standing and talking and whatnot, and secondly, Sid Miller just won the coveted AHTBM ‘Douchbag of the Day’ award.
It should be noted that it’s not easy to win such a prestigious honor.
Mr. Miller just makes it look that way.
Then from Tom I get this short and oh, so sweet transmission;
“Bikes, beer, tools.”

Sadly the title was taken from American wrench John Dawson by Dylan Coulson, who not surprisingly is an Aussie.
But to both men I tip my cap in admiration. There most definitely is no shame in either of their respective game.
Of course there is also no shame in twisting the young minds of those who rely on you for your insight and guidance, as indicated in a recent email from Erik;
“We got Tyler (the 14 year old son of my lady) out for not only his first cyclocross race, but also his very first crossdress appearance. 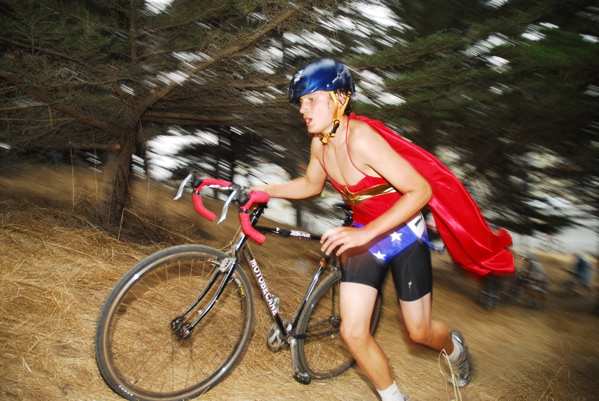 He did me proud! Manned up and came dressed in his Mom’s Wonder Woman costume. Now I have to deal with wierd visions next time she wears that and offers to tie me up with her Golden Lasso. Er…damn.”
In some cities, child protective services would have been at Erik’s door within a matter of minutes.
I suppose we’re lucky that San Francisco is not like ‘some cities’.
Also, before I move on, it is out of paralyzing fear that I give Ms. Pamela Palma photo credit for that shot, as she has been known to murder for less.
Homie Newt sent me the following clip to let me know that the training between his road season and cross season has been going swimmingly;

From Snakebite I get the aftermath of an email he sent me some time ago;
“Stevil,
Hope the Black Market is, well, Black.
Can’t remember (shit) if I sent this or not. We did a little bike jousting tournament here this summer – double elimination of course.

Rollers on BMX bikes, boxing gloves on 10 foot long PVC pipe, plenty ‘o beers ‘o courage consumed.
~Snakebite~”
With my 39th birthday looming, I can’t help but look at these photos and wonder how the hell any of us have made it this far with all limbs and most of our faculties intact.
The way I see it, if you make it through your teens and early 20s, you pretty much have a free ride until 40 when you then begin to have to worry about prostate cancer and blindness.
Finally from my homie and newest advertiser upon The Black Market, D Pow!, I get this with only ‘Hell yeah’ in the subject line;

It’s like a little box of awesome all tied up with a day glo yellow bow.
Also, in a segment of a recent email from Joe Parkin(‘s still got nice hair I got this;
“PS: Do you like my new car? And my new chopper?”

That Joe always has a knack for procuring such a nice array of items. I mean seriously.. My man is just blessed.
Now I’ve got a couple of event flyers for your edification, the first being for a throw down this coming weekend in Hell-A;

And lucky for me, I was able to get some Swobo stuff off to the babes from Babes in Bikeland for their event’s third annual running just before my departure from those hallowed halls. Please note that this race is for the ladies only, however if there were boys who wanted to help out, run check points, splash themselves with beer in slow motion or offer any other pertinent aide, shoot ’em an email, or check in early on Saturday.

Lastly, a late entry for the weekend from my friends in Boise;

It’s like a continental triangle of fun.
I think that’s it from this end. We’ve covered all bases here today, and I look forward to a long weekend of doing nothing but turning myself inside out on a bicycle and sleeping it off, only to do it again the next day.
Thursdaythursdaythursday, Friday..