As I sat on my flight enroute to PDX this past Friday, and devoured Chuck Klosterman’s ‘Killing Yourself to Live. 85% of a true story’, I couldn’t help but notice a couple of similarities between his journey and the one I was embarking on to partake in this year’s Single Speed Cross Worlds. In his story, he is traveling across country to visit spots where rock and roll icons met their demise for an article he was writing for Spin Magazine, while attempting to obtain enough viable information for a secondary piece- the book. I too was traveling to a place in hopes that I would return with enough ammunition not only for a single post (my Spin Magazine) but for a possible up-coming article in Dirt Rag Magazine (my book). The ideas were pouring through my head, and poetic passages constantly at the tip of my tongue.

That is until I got within three feet of my computer and the well suddenly seemed to go dry.

The short version (that isn’t very) is that Friday night found the West Coast contingent of Team EVIL converging on Evil Carrie and The Captain’s house like a plague of locusts with gas and bad attitudes.

Or at least a plague of Robert, Biddle, and Opie. That’s bad enough.

There was some football on television but Chevil (who later would evolve into his stupored alter ego- Stan Beaver) and I decided to make our way downtown to pick up the East Coast luminary and adjourn to the dark confines of The Magic Gardens, which is the oldest strip club in all of Portlandia. Post nudity, we went back to HQ, where there were intermittent bouts of sleep, wrestling, alcohol abuse, pants pissing, sleep walking, roasted chicken, floor pissing, face punching, and various other activities that are generally approved of by the church.

Lucky for me, all of the photos I took that night were lost the following morning, but scanning the interwebs yielded this result; 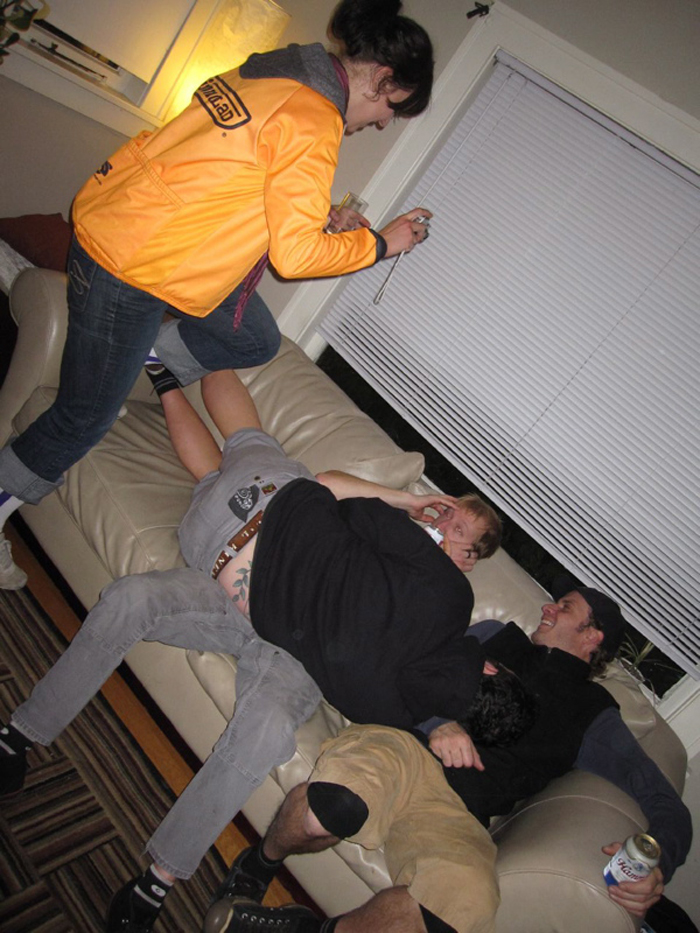 Being the team that other teams envy is hard work, so like any well oiled machine of athleticism, we woke up the following morning somewhere between 6:00 and 10:00, ate breakfast, concluded that Brad, who was sleeping in the basement wasn’t being dripped on by a leaky pipe, but rather a leaky Cheever who relieved himself at some point in the evening into an air vent in the floor.

If EVIL was Public Enemy, then Chevil would be Flava Flav.

After breakfast, coffee, the expulsion of said breakfast and coffee, and then donning our finest wet weather apparel, we made our way through driving rains to the site of the day’s festivities departure- King Precision Cycling Component Company.
The thing was, we had to stop and enjoy some whisky under a bridge, and then meet up with friends at 7-11 to fix flats and slap fives, so by the time we actually got to King, everyone was gone.

We gave chase, and after an hour and a half of frolicking through the woods, along roads, and between alley ways, we finally met up with the group and a very soggy Tony Pereira who was pied pipering this peloton of the damned through the next leg of our ride and its final destination- a gigantic pile of beer.

Of course being that we were on a slightly later schedule, the beer was gone, but always with a trick up our sleeves, we adjourned to a nearby bar and met up with Bay Area brothers Jamaca, and True.
I think their parents were hippies.

Finally, arriving back home just in time for the gods to stop crying, we got cleaned up and again, Cheever and I parted ways with the others of out ilk and met up with former Surly Bikes dick, Nick Sande to attend the party, and witness the debate- The preliminary decider to pick Seattle or San Francisco as the location for next year’s event.

Watching the debate was like getting hit in the balls with a chalkboard that had nails dragging across it.

At one point Sally (who was representing Seattle) told me that he was going to call me up on stage as a lifeline. (Each contestant was allowed one lifeline to help argue their case. I find it interesting that Seattle would choose me, and the Bay Area would not.) Except since I wasn’t from Seattle, I could not be chosen, though regardless of whom I would have been brought up for, I could have only described how passionately, and profoundly apathetic I was concerning where the race ended up the following year.

Did I mention that at this stage in the game, of the 30 or so hours I’d been in town, I had been sober for maybe four of them? 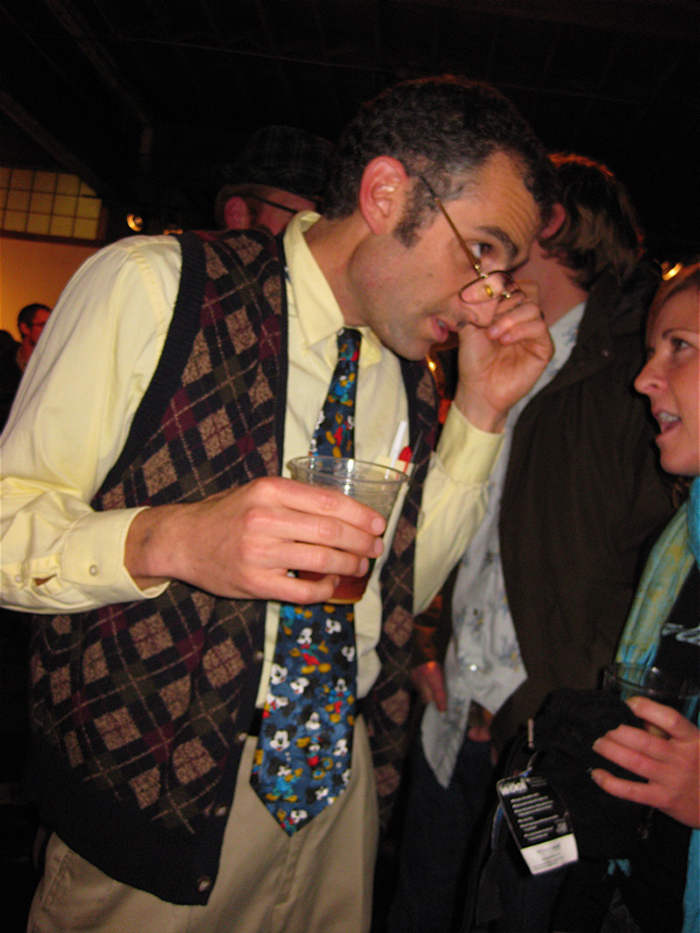 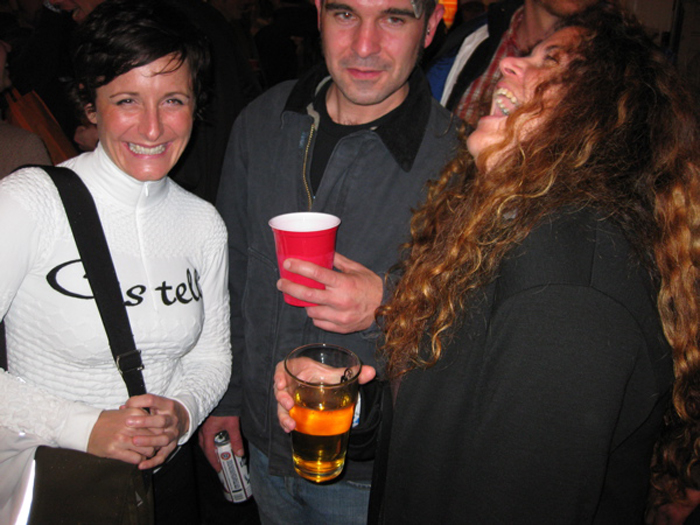 Circle A giving me a heart-on; 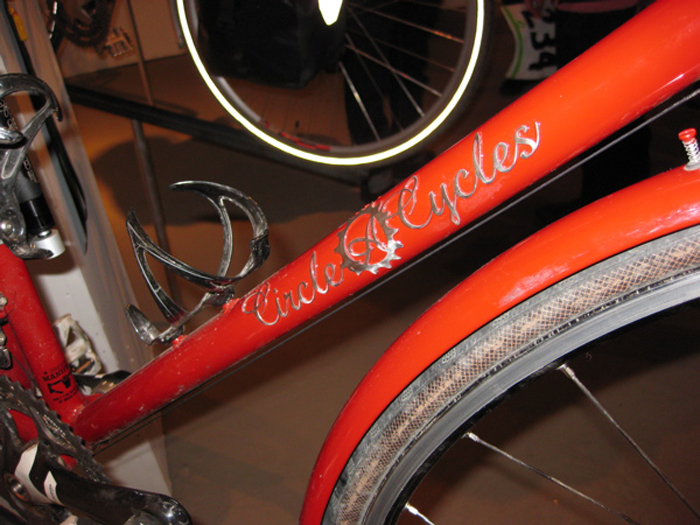 Jay Sycip, being the smilingest guy in the room; 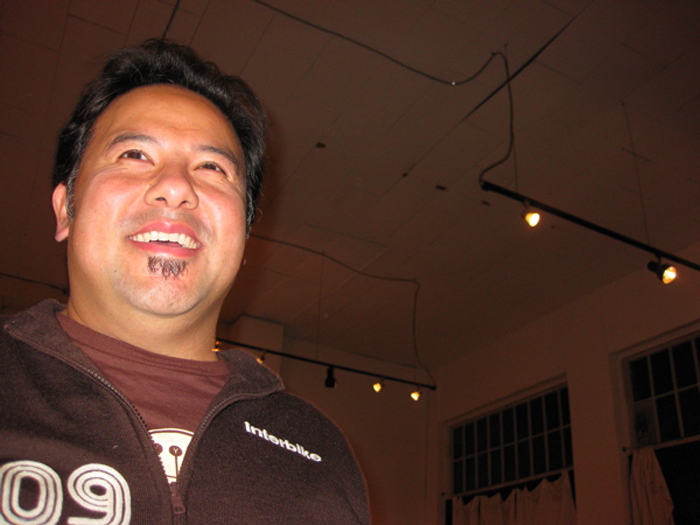 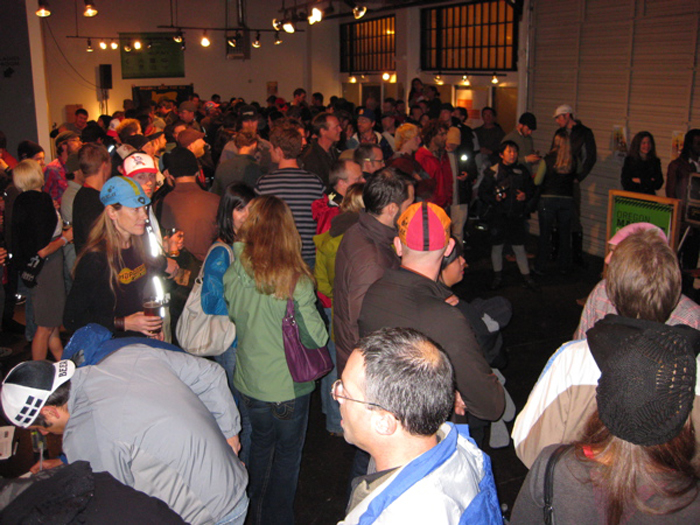 Corndog from Dank Bags and also most notably the “Beernet Helmet” fame prepares to get jiggy; 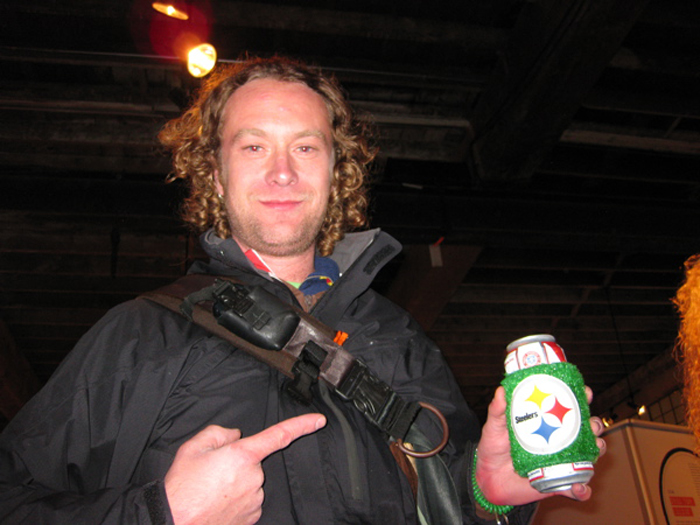 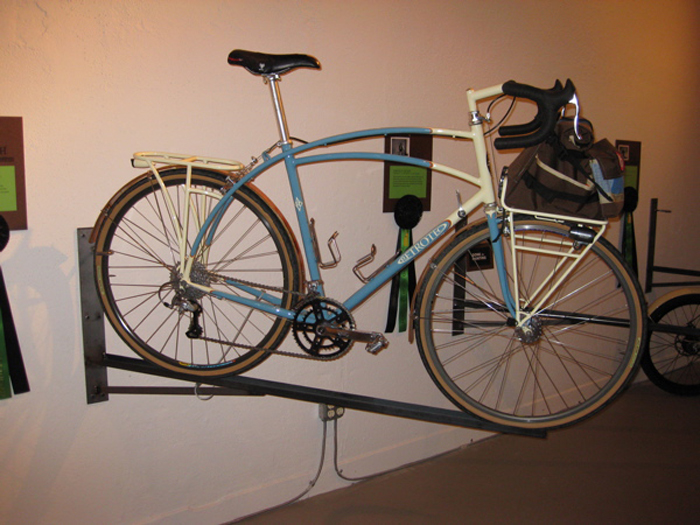 Falling out of the Manifest warehouse, back into the Magic Gardens, the next thing I remember is mentioning to some people that I had never had a lap dance. 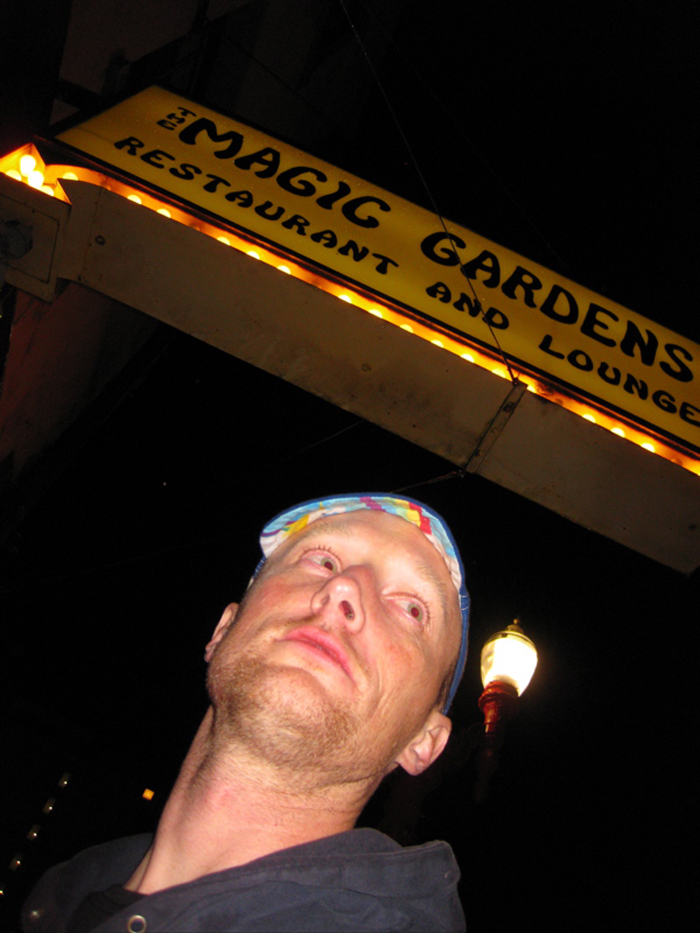 See, bringing it up, I felt no shame, as all this means is that I’ve never bought one for myself, and my friends are all too poor to do it for me, but as soon as I was surrounded by astonished gazes and gasps of “no way.. Really?!” from men and woman alike, I felt a little like a boy scout who freely and mistakenly admits aloud that he doesn’t know how to tie his shoes.

Well, the lovely Lana took care of that, and before too long I was staring headlong into a petite brunette’s nether regions, while a small army of friends stared at me.

Did it feel awkward?
Yeah.. pretty much.
Will I do it again?
Probably.
Did I part ways with the young woman telling her I thought she was attractive, even though I didn’t genuinely mean it?
Yes.
Did I proceed to abuse my liver and engage in conversation with the other talent in the place about “how she makes her butt do that” and how “I don’t think I could make my butt do that”?
Yes.
And finally, did one of our own get bounced from said bar for smuggling his own libations in?
Also- yes.

You’re not here to hear about the festivities though. You’re here to learn of the heart-attack serious cyclocross style athletic preliminary training that Team EVIL engages in before battle.
The strategy of the king’s sport…
I know this is why you’ve come here today, and in leu of that I will simply pile on a little more photographic evidence. 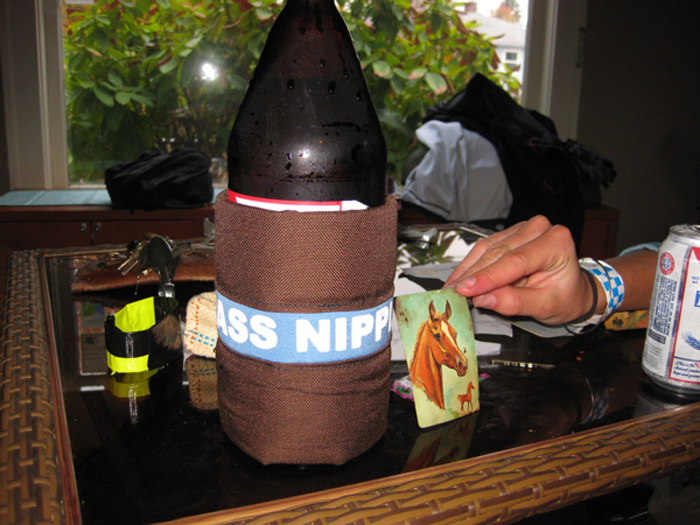 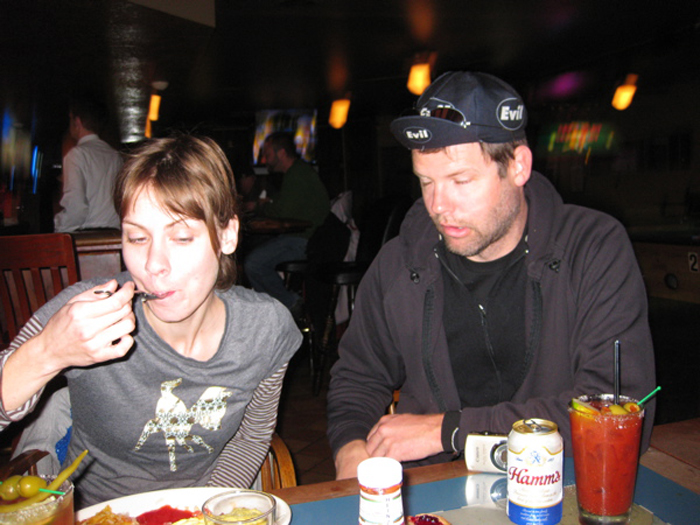 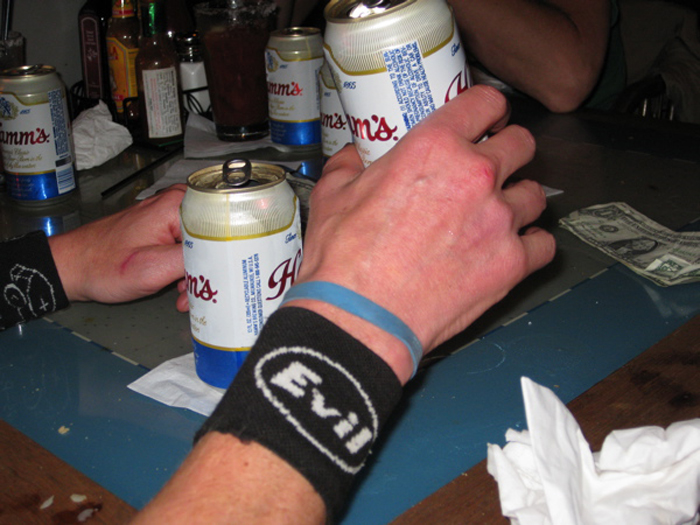 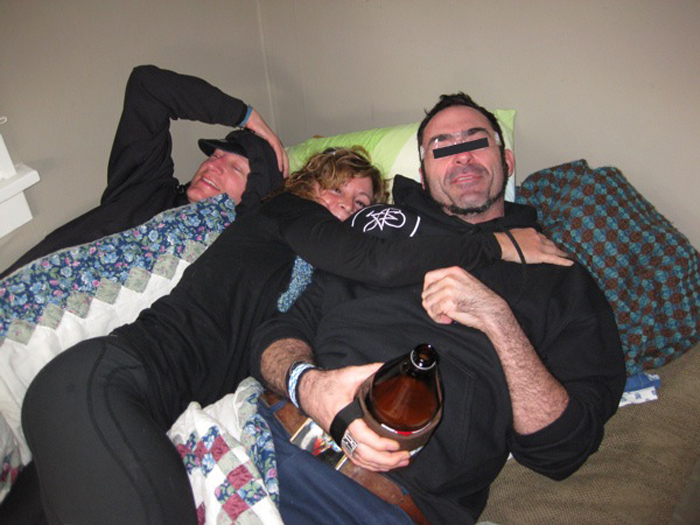 Once we got the pre-race warm up out of the way, we departed to the venue where we took shelter at the Shimano truck and the welcoming arms of A.K. who looks here a little bit like he’s doing The Robot; 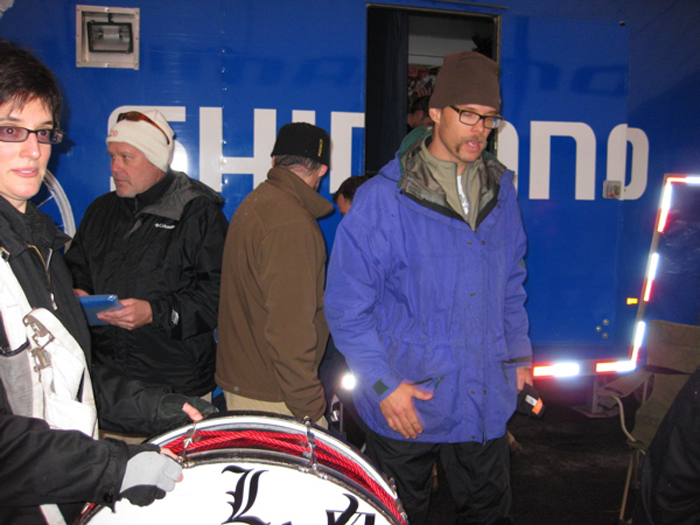 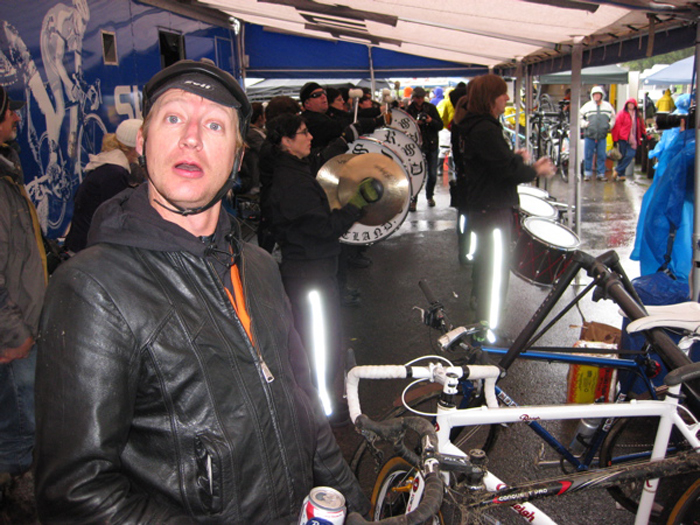 I suppose I should also include that this was just after he himself ate a bunch of mushrooms.

We all gave a hearty thumbs down to that plan, and instead adjourned into the water and the mud to take in the sights and the sounds before our own cyclocross style athletic pursuit got underway; 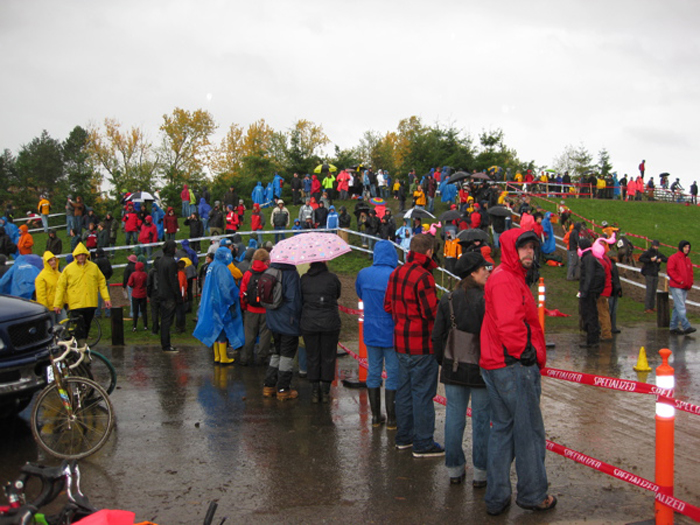 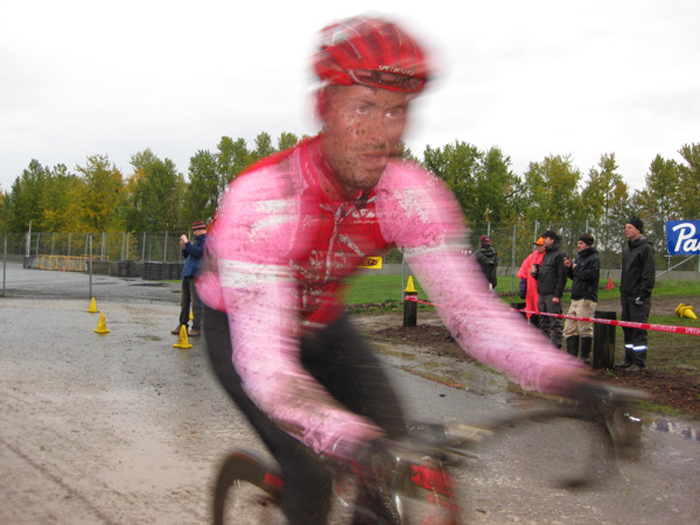 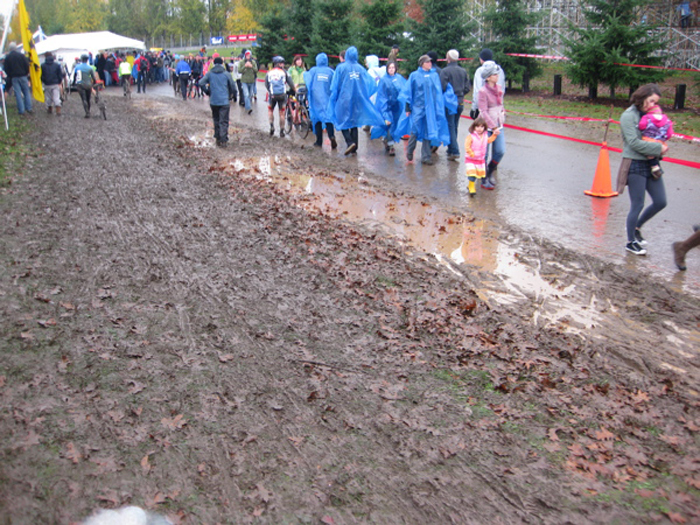 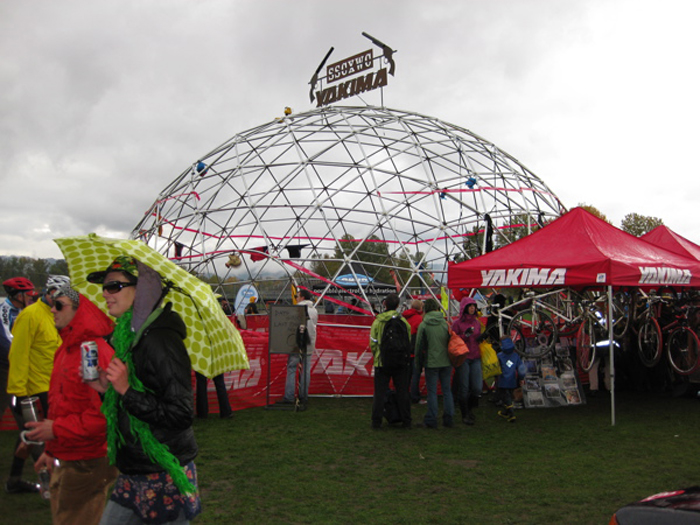 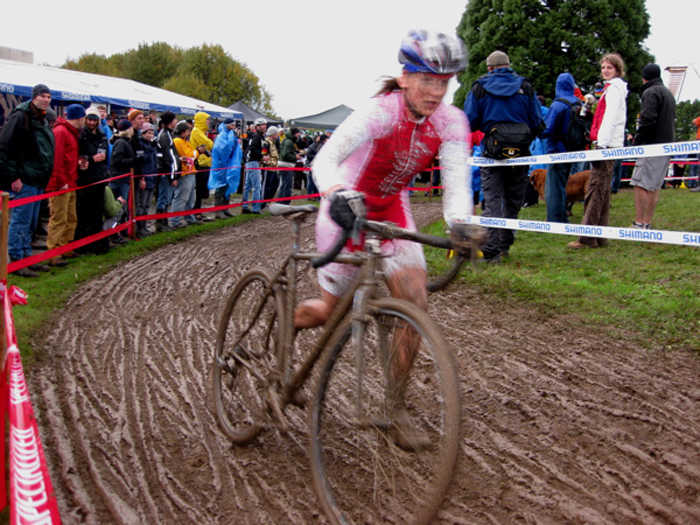 Finally, as day light began to fall, the battle time was upon us, so as all of the warriors converged on opposing lines, an order to arms was exclaimed resulting in an explosion of brightly dressed soldiers running in a million different directions, the ‘CracK!’ of rims and pedals hanging up on one another filled the air, and streams of tears began to flow as custom paint jobs were reduced to slashed scars of bare metal.

My ears went deaf, save for the occasional scream of EVIL, and my eyes narrowed to mere slits, as I dug deep into my reserves. Lap after lap I entered the stripper bus short cut, as proven by this shot of me inspecting one of my new friend’s posteriors, while a guy in a Spiderman costume is outside, apparently wondering why he was not; 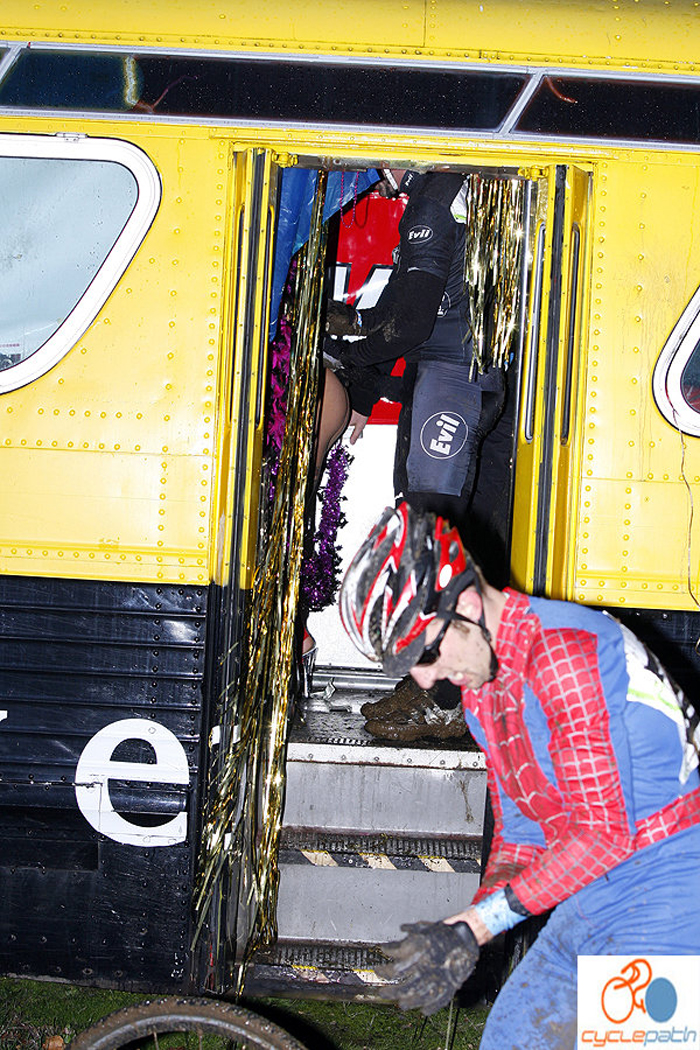 It was all to ensure my ultimate victory, understand.
Nothing more, and nothing less.

This was simply a huge stack of the very most debased pornography I could find, neatly cut out, for maximum damage, and thrown at the announcers on one of my passes.
You’ll be reading about this in VeloNews, almost certainly.

Somewhere along the way I came across the East Coast luminary and got him on my wheel to the finish, where we engaged in the most heroic elbow to elbow-heads down-in the drops, sprint finish Portland has ever seen. It was so epic, people actually thought they were witnessing something other than a sprint for middle pack and middler pack.

As I came to conclude on Tuesday, upon looking at the results, my race number got confused with Cheever’s, and I actually ended up taking top honors for my team coming in in a respectable 78th place.

Just try to take away my standing as the upper echelon of the mediocre, and like Danzig, we will fight to the death.

After the race some stuff happened, and a little bit of it looked like this; 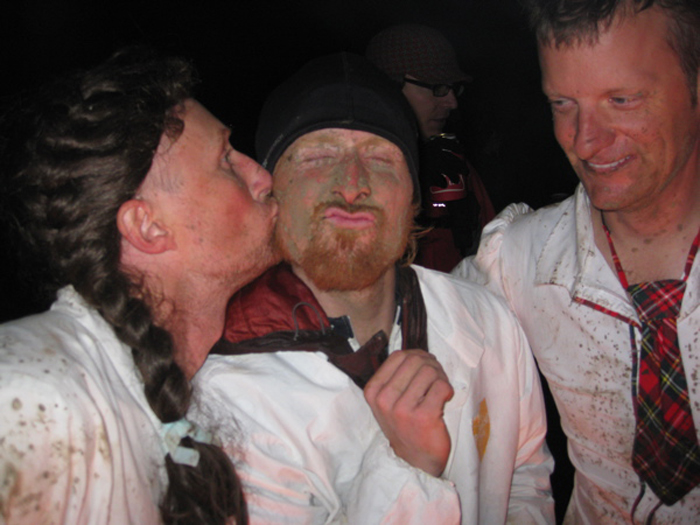 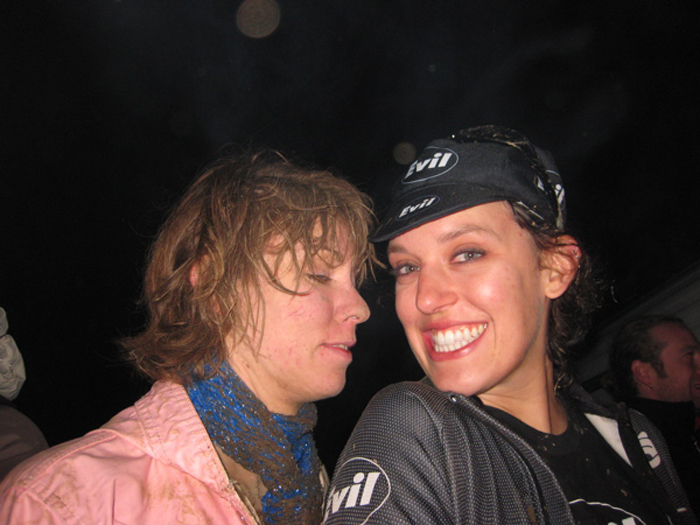 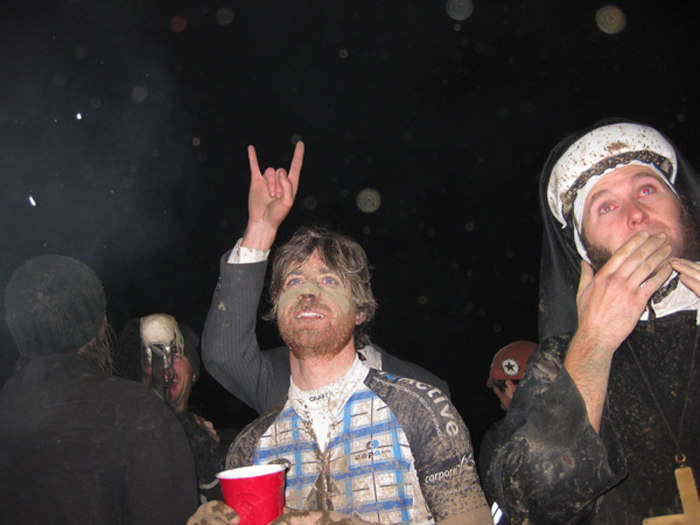 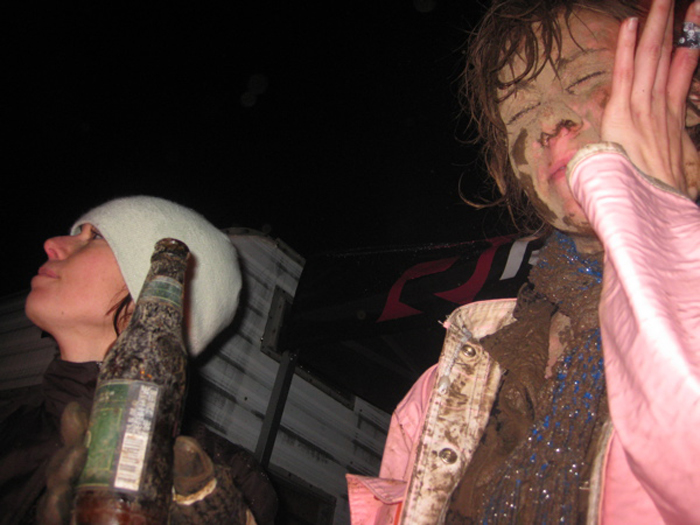 I was feeling good and ready to go, but the evening ended with me eating a bunch of meat and falling asleep with a full beer on my stomach, leading to a spill and a lap full of liquid.

The time to wake up from the dream had arrived and I packed my bike up with a bunch of smeared and clumped souvenirs attached; 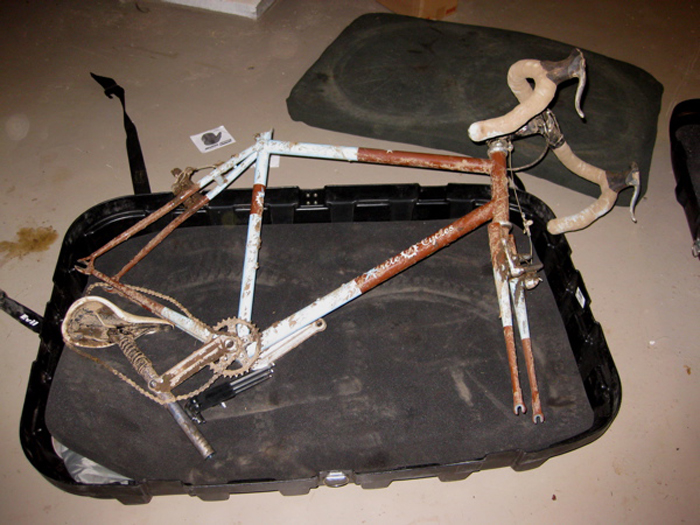 Finally, sitting at home with a half full cup of coffee (notice I said ‘half full’. The weekend gave me an attitude adjustment) the whole debacle seems like a dream.

Is the 78th place SSCXWC tattoo going to be the next on my body?
Perhaps.
Will I go to Seattle next year?
Maybe.
Will any of you be there?
Dunno.
Will it be possible to surpass the bar that Portland has set these last three years, so impossibly high?
I’d like to think so.

Back to my initial discussion of retaining enough additional information for a follow up article, and my love for that Klosterman book, I think I may have blown my wad here, but perhaps with a little bit of time, and an equal amount of perspective, I may eventually be able construct something. Even if it too, is only marginally accurate.

I can’t sign off without tipping my hat to my friends (some new, some old) in the PNW, many of whom were immensely instrumental in pulling this event off, and many of whom were just responsible for keeping my sobriety at bay. I thank each and every one of you.

It’s weekends like this that keep my heart filled with the ingredient that inspires one to keep their heads out of the stove. 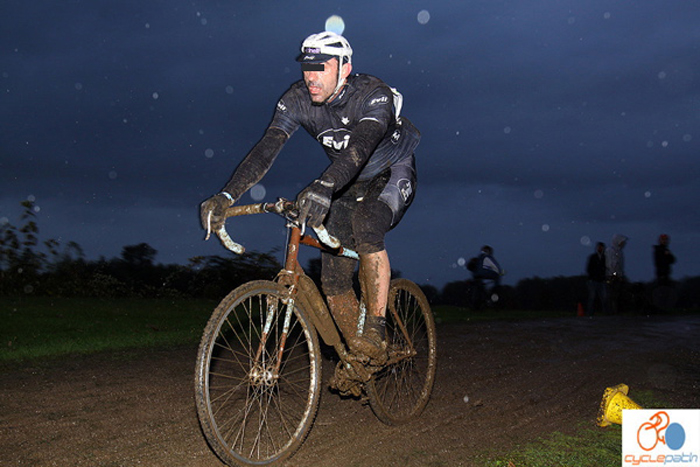 18 Responses to “I have been to the mountain, part two.”