The baby is jam packed and ready to burst with the usual assortment of randomness like it hasn’t been for a while, so without further hesitation, let’s shake the sheets and see what’s happening out there in the world.
Just so you know how far back we’re going, here’s one from Karl;
Hey Stevil,
Excited to see your name on the list for SSCXWC this coming weekend. Should be a good time.
So I finally got a job in the bike industry and I’ll be down there this weekend.
One of the marketing guys here made this video, and I thought–who better to share it with than Stevil?!

Keep it out of the Cactus and you’re golden. Have a good one.
Maybe I’ll see you this weekend.
Yeah.. “this weekend..”. I’m obviously on my game.
Aside from the Hüsker Dü, which is a given, there is alot to love about that clip, and makes me long for the dog days of summer.
Which in these parts are kind of all the time, but I don’t want to rub anybody’s noses in the fact.
Next up, Gypsy the Punk has some insight on the stimulatingly obtuse and the socially extrospective;
“Being the owner of a trivial mind filled with trivial things, I have found myself of late struggling with one of life’s grander questions.
No, I’m not trifling with, “Is there a god?” I already know the answer to that. Of course there is a god. His name is Joe Strummer. What about, “Is world peace a possibility while those that profit financially from war are still in charge?” Ahem… I’ll let less cynical minds than mine answer that one.
What I’ve been wondering about is much more profound and life changing… What I want to know… What has been keeping Mr. ThePunk up at night… Is this:
Is Lady Gaga the reincarnation of Vladimir Nabokov?
“Ridiculous,” you say.
“Riducu-not,” I counter. Consider the following…
1- Both Ms. Gaga and Mr. Nabakov were both born into very wealthy families and received hoighty-toighty private school liberal arts educations.
2- Both somehow managed to overcome the stigma associated with said pampered upbringing and create the bulk of their fan base out of normal everyday scum (you and me).
3- Both started to receive international acclaim at age 23.
4- Both spent time in New York City developing their chops before moving elsewhere (Nabokov to Massachusetts and Gaga to L.A.) and making it huge.
5- Nabokov’s unfinished novel will be published in the December 2009 issue of Playboy magazine (a place that Gaga will most assuredly turn to one day to revive her career).
6- And last, but certainly not least, they look EXACTLY alike. Am I the only one that sees it? I didn’t think so…”
Even though I know he doesn’t, it would seem as though The Punk has way, waaaay too much time on his hands.
At some point during my recent trip to Minneapolis, GenO and I were running through the woods dragging a long vine along behind us. Apparently Matthew took exception with our activity;
“Hi Stevil,
Here’s a shot of my ankle post-Homie. It looks worse than it feels, which, at the risk of using an overused comeback, is what she said.

I figure this image can serve as a warning to all the kids who want to watch other kids swinging on branches. I say, don’t do it. Find your own branch to swing on.”
That’s good advice for all sorts of applications.
And.. Sorry about that Matthew.
Sometime in the last four weeks, Mike got ahold of me to preview a test run of the cake he’s gonna make me for my birthday;
“Hey Stevil Well my little girl turns 17 tomorrow. Even though she quit the girls mtn bike club when she was 14, she’s still my baby. To help celebrate I baked her a cake.

I bought the mold so play your cards right and you may end up with one of these beauts one day!!
Cheers,
MikeH”
I would prefer mine upside down, and the writing to be in blood, thankyouverymuch.
Another email I got shortly after my sojourn to Portland was this one from Raleigh Sally;
“I’m thinking you could drag crew up here for SSCXWC next year…I’m already dreaming up challenges for the combating teams, and I really think there needs to be something choreographed…
Thanks for the punch in my liver this weekend.
Sally”
It absolutely breaks my heart that that link is unembedable, because it needs to be seen by everybody the world over.
Also, a little known fact is that Joe Parkin (has nice hair) was a runner up for this team.
He is a man of many talents.
If the Worlds ever does end up in San Francisco, it will need far more of that, and a few of these, though I know that it wont.
On to other topics- Being a marginally reclusive weblogger myself, I have in the last few years been entrusted with the identities of some of our ilk’s most highly regarded personalities. Of course there is the Bike Snob, whos real name is Evan Dando, the equally mysterious Bike Lemming, whos name is also Evan Dando, and then there is the even more illusive genius behind The Metal Inquisition, who we will simply refer to as Evan Dando.
He has successfully skirted the wrath of humorless metal heads for long enough to not only finally put the finishing touches on his newest work of heart breaking brilliance- (The) Cycling Inquisition, but to send an email to say hello, and reference Joe Parkin’s hair;
“Sometimes, when life isn’t awesome, you have to go and do something about it. You have to make things happen. It’s with that spirit in mind that I share these two pictures with you.
First one is of a sweet Iron Maiden logo that my brother and I drew at the Tour de France this summer; 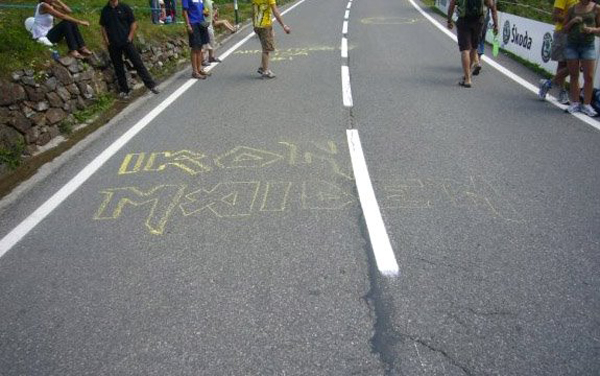 The second one is of Jerry Only from the Misfits signing a 7 Eleven jersey. Joe Parkin (or at least his sweet long hair) would be proud;

I’ll be posting these two gems in my blog first thing tomorrow morning.
Be well,
Evan”
If you know what’s good for you, you’ll check back to C.I. on the regular. You know.. Bookmark it, or whatever the hell you do when you want to have easy access to sites that doesn’t involve writing it down on separate post-it notes, which is what I do, and take it from me.. What I do sucks.
In one final dip into the mail bag, I’ll bring out this bit that’s been sent to me a few times from an assortment of like minded deryls, most notably DPow! from Portland Design Works;
Pale Is The New Tan;

Oompa Loompas and Al Jolson sympathizers the world over can now rejoice.
I feel good to have made a dent in the submissions here today, and I hope you feel good about my dent too.
I hope you all have happy Thanksgivings. I’ve got alot of stuff to be thankful for, and I though I try and acknowledge it every day, sometimes the task slips through the cracks.
It’s nice to have one day where that practice takes a front seat.
On that note, it’s Wednesday today, which in Roman times was the day that everyone ate a ton of candy and then went out and lost their marbles on bicycles, which in those days were called ‘roller horses’.
Be thankful, get rad, and get into the same.