…than a little bit of schadenfreude. 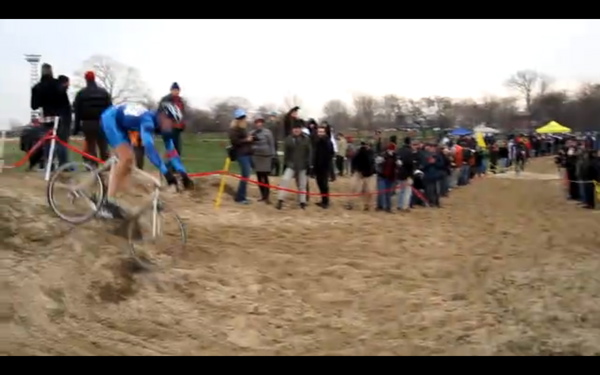 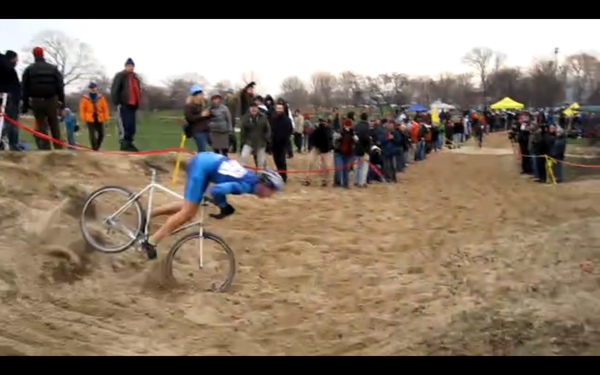 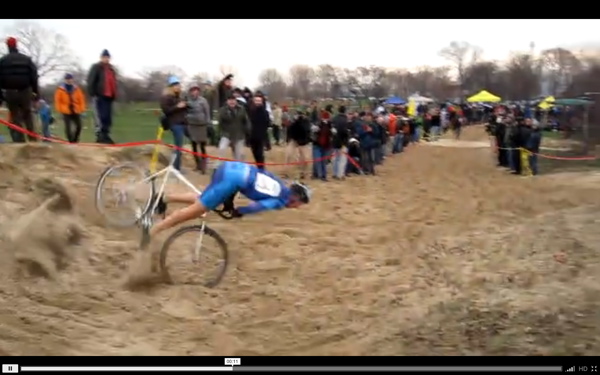 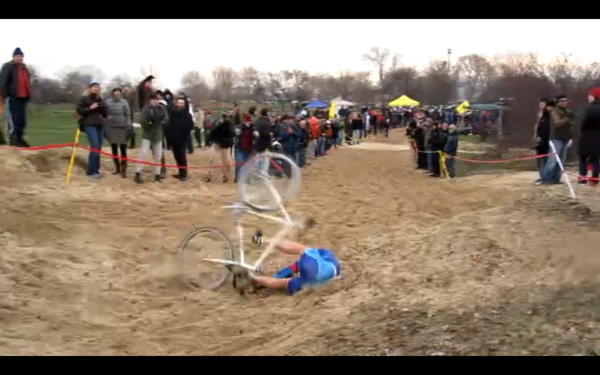 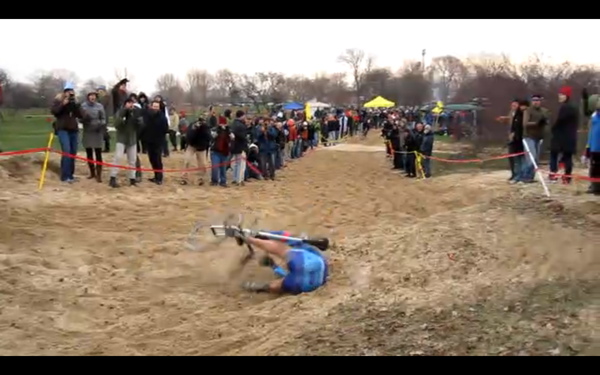 If you scroll up and down super fast it’s like an old timey movie, but if you’d like to see it in all of it’s technological glory, all you gotta do is go here.
Someone who also knows a thing or two about a thing or two in regards to taking pleasure in another’s unhappiness, is my t-shirt printer, John. Well there on the Stroker Ace website they have a blog with a lone entry, which I have been toying with the idea of displaying here.
I think today seems like a good time to do that.
*I should also mention that John’s verballage leans a little towards the salty side, so if that’s something that you might find offensive, take the next minute and a half out, and chill out here.*
The life of a Hollywood stuntman
“So I was drinking beer one night like my parents had just been killed in a horrible car crash when I decided to show my special lady friends how to stuntman punch. I’m not sure when and where I learned how to do this but when I try to remember I’m struck with a strange feeling of serenity and my eyes well up with tears… What the fuck am I talking about? Oh yes-punching your friends. I like to think I inherited the skill after many repeated viewings of “Hooper” which if you haven’t seen go rent immediately and thank me later. So what you want to do is extend your arm all the way out and get it as close as you can without touching your friends face. Unless they’re a douche. 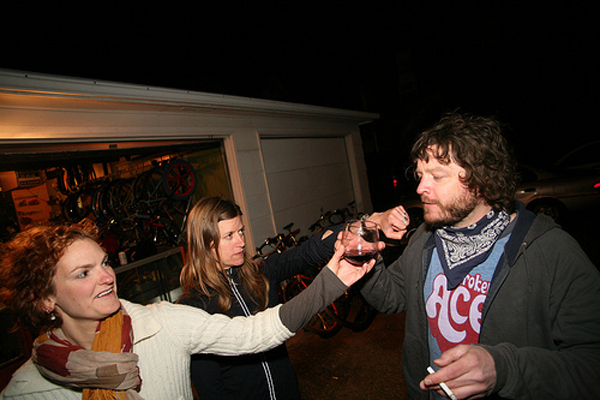 Next up the punchee should fill their mouth with a liquid-preferably red wine-and prepare for the incoming blow. It’s totally badass if’n you got’s Chiclets to spit out as well to proliferate the added dramatic effect cuz they look like teeth. We ran out of wine so we improvised with beer and gum. Its also important for the puncher to keep their shoulders neutral so you don’t actually hit the other person. Unless they’re a douche. 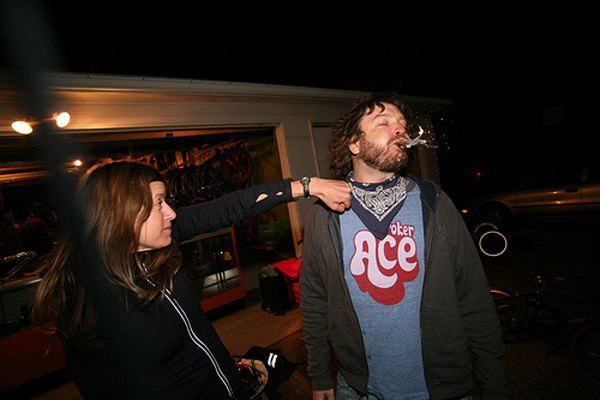 Make sure you are both dedicated to the fine art of pretend punching and FOLLOW THRU, PEOPLE! Other wise it looks fake and whitnesses to your charade will tell everyone you suck cocks in hell. At least at fake punching. 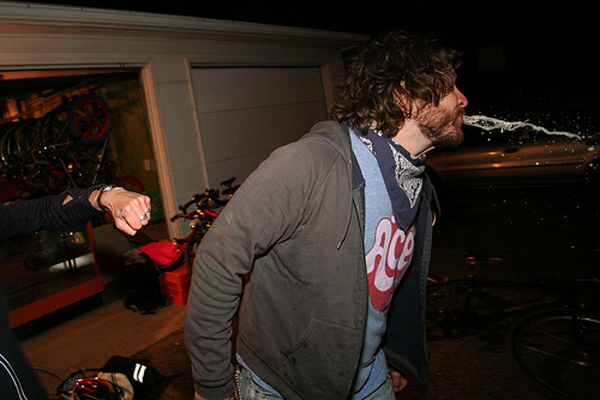 At this point the punchee has expelled the entire contents of their mouth and everyone is all like “fuck yeah” and shit. Its also good to have a third party involved for sound effects. Just have them punch their hand as hard as they can at the moment of contact. And that is how you reach the apex of your existence. Roll credits.”

I get the feeling that John isn’t Dane Cook’s biggest fan, and I can’t say that I blame him.
Though with that being said, and hailing from the same family tree as the previously mentioned schadenfreude, loving to hate is a sensation I’m all too familiar with, and the newest object of my scorned affection is MTV’s Jersey Shore; 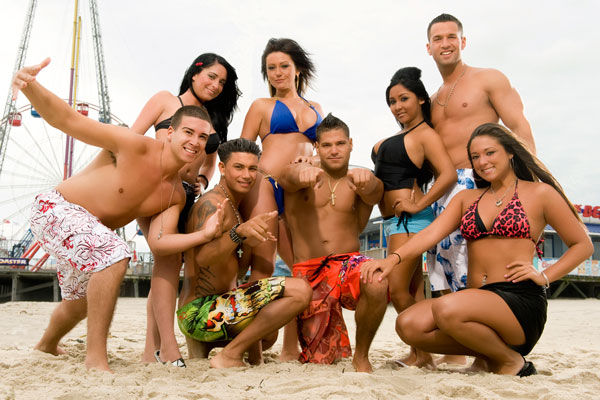 It was upon the recommendation of one Joel McHale that I watched (albeit through my fingers) this program, and I have to say that my first thought was ‘for the good of humanity, when are people like this going to start being born without the ability to reproduce?’
It’s like Hot Chicks With Douchebags, come to life, and I’m not ashamed to say, at times is sometimes hard for even me to stomach.
Now I’ve never watched The Hills, or any of those other scripted ‘reality’ shows, so I’m not entirely sure if this is of the same ilk. Thus far, I’ve only seen one episode, so aside from the gravity defying breasts, and orange tans, I am by no means an authority as to what is and what is not genuine, but like I mentioned at the top of the post, its all about enjoying the misery of others, and from where I stand, the goombahs on ‘the Shore’ have what fuels that particular fire by the truck load.
They’re just too stupid to realize it.
This next bit taken from Prolly’s blog has nothing to do with anything we’ve covered so far, but is worth a viewing if for no other reason than to get a taste of a little bit of D.I.Y chutzpah;

Whether or not the bike lane in question was actually removed at the community’s request I’m not entirely clear on. From all the way over here on the Left Coast, it seems to me that a lot of assumptions are being made, and accusations are being thrown like so many Mortar Board hats at a graduation. (I will refrain from making any analogy about what Hasidic Jews throw, because that is out of my comfort zone, and I’m simply ignorant of the facts.)
What I do know is that this is probably not the last we will be hearing about it.
Again, onto an entirely different topic.. I know I have always been committed to keeping this blog, as well as my former one from being a numb-nut boy’s club, and encouraged the participation of mens and womans alike, so it’s with slight hesitation that I post this next bit of health news, but this is just too good to keep to myself.
To quote The Pole Riders (where this link originally came from) “Yay! I’m gonna live forever!”
“Just 10 minutes of staring at the charms of a well-endowed female, is roughly equivalent to a 30-minute aerobics work-out.”
It looks like my ‘training regiment’ just took on an entirely new meaning.
I try so hard to maintain an existence on the periphery of the gutter, but I suppose it’s impossible to stray very far from where you emerged.
It is at this point that I bid you another fond farewell, and a thanks to all the folks who’ve contacted me with well wishing for by busted-upness. That is very kind of all of you and greatly appreciated, but it’s not the first time I’ve met the business end of the ground and I’m sure it’s not gonna be the last.
Secondly, as per the theme of this post, all of you are supposed to actually be relishing in the fact that I was the one that got flicked, and that you would like to have been a witness.
After all, it really was something to behold.
A’ight then.. Stay warm, and junk.