At least until the next derailment.

Thank you Tina B for bringing this image to my attention, and thank you Sir EDW for the use of it.
It’s inspired me to take this madness a step further.
FAGS HATE SIGNS.
GOD HATES RAINBOWS
I HATE GODS WHO HATE FAGS WHO HATE SIGNS.
And so on.
Humanity certainly is an odd duck though, isn’t it?
Anyway, speaking of hating and Gods and whatnot, how about some?

Besides jazz, gumbo, above ground graveyards, Phil Anselmo, and (domestic) voodoo, Eyehategod is one of the finer things to come from New Orleans.
However, one thing that I know for certain is impossible to hate is Strawberry Shortcut.
It’s old news by now that an event nearly as important to the bicycle world as ‘The Cross Vegas Cyclocross Extravaganza’ is at long last making it’s way to American soil. The 2013 Cyclocross World Championships is on its way. No, not to the Pacific Northwest, or New England, or even to Boulder where they take cyclocross seriously, but to the unsung hub of cyclocross styled athletic endeavors, Louisville Kentucky. There has been a great deal of effort directed towards this occurrence by the good people in Louisville as proven by this clip that was sent to me from Lauryn;

Not only have they rolled up their sleeves and cleared acres of overgrown land, but Assistant Director Storch has even gone so far as to dub the area a “cyclopark cross course” for “international, and then maybe one day, world wide use”.
Talk about dreaming big.
But you know, all razzing aside, I tip my hat in thanks to the folks behind this undertaking and I look forward to drinking bourbon in their presence.
But not on the course from a hand-up, or a hand-down, mind you.
After all, that’s illegal.
Now then, as I’d mentioned last week, Dayton from The Soil Saloon presented me with a bit of a challenge saying that I probably didn’t even drink beer or ride bikes, and that all of what I expound upon here is a sham.
I wanted to prove him wrong by showing up to their event this weekend, but between the rug getting pulled out of under my site, generally living beneath a cloud of apathy, and of course being a sober, non-bike riding gay man living in Utah, I didn’t go.
As it turns out the fun police arrived just in time to do their own rug pulling, so I didn’t miss anything.

This is a good thing, cause I hate missing out on fun.
What I did in substitution of that fun however, was not only fun, but made me feel superior to others which all in itself is worth the price of admission.
I’ve long contended that every single person who rides bikes on trails should at some point throughout the year dedicate at the very least, a single day to trail maintenance.
While I was out and about, engaging in just such an activity this weekend, I was a little surprised at how many people were riding, despite the soggy and damaged condition of the trails. There is a false sense of entitlement among the mountain bikers in this region, that perhaps is prevalent across the board. It truly is a breath of fresh air when I go back to Minneapolis and see that not only do people tread lightly, if at all during the wet months when trails are most susceptible to damage, but even the most hardened derelicts will throw on some gloves and join in on scheduled work days.
Unfortunately around where I live, a good number of the trails are not only illegal to ride, but curiously illegal to work on as well. This is why we have to take it upon ourselves to act as general care takers and ensure the health of the trails on which we ride…
-Cause nobody else will.
Sometime around early December I took note of a number of downed trees across one of my favorite bits of single track. I had wanted to get back and do some clean up, but then I got hurt and off road riding took a back seat. Finally this past weekend I threw caution to the wind and with my folding saw, collapsable shovel, bananas, beer, cookies and chips in tow, made my way to the woods to get dirty.
A good bit of the trail had been cleared in my absence, so I got warmed up building a little ramp over an old downed tree;

As I was putting this together, I realized that at one point this particular section had a similar set up on it, but had been dismantled either by the elements, or repeated use.
So from start to finish, this took maybe 45 minutes. Easy peasy
Moving on…
Only a matter of yards later I came across this;

What you’re looking at here is a small seasonal creek (top), the run off for which got plugged up, causing the water to divert and run into the lower puddle, eroding the trail between the two.
All that it took to fix it was to cut several downed pieces of timber to length (luckily we have an abundance of long, straight redwood branches that litter the forest floor), clear the top water way’s outlet, dig a trench to drain the bottom puddle, and use that dirt to patch the erosion in between; 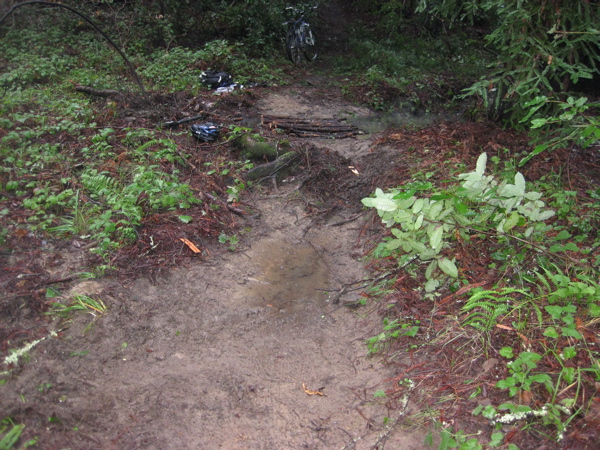 Again, it wasn’t any big deal. I’m no I.M.B.A. trail building super genius (those people do amazing things, by the way) but with a little bit of time and elbow grease, I can at least take one problem spot out of the equation; 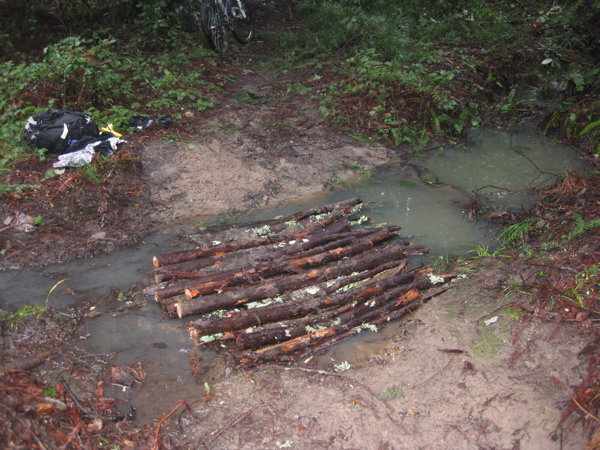 Because I lollygagged, drank a beer, and spent a bunch of time listening to silence, this took me about two and a half hours.
After riding along for a short spell, a little further on I came across this;

Now this is obviously going to become an issue. Either folks will ride through the middle and turn it into a quicksand soup, or they’ll skirt along the side, widening the trail and making a general mess of the whole area. The solution? Bridge it..
I’m a one trick pony. It’s all I really know how to do.

This one took the longest amount of time, simply due to the distance I was covering. Luckily Garvin Barker happened along and took a shift at sawing logs which was good, cause my hand was sore, and I needed to ice it with a cold can;

All told I think I was out for about seven or eight hours, and in comparison to the hundreds of hours a year of pleasure that those trails provide me, it really is a small price to pay.
Check on local trail building days, or if you don’t have any, do a bit of guerilla maintenance. I promise, the more everyone does, the better off we’ll all be.
Finally, and as usual, having nothing to do with anything, I present to you this;

Taken from probably is the best website in the history of websites, You The Woah.
And also this photo shot by The Sucka Pants;

“Pulaski Bridge, Brooklyn/Queens border.”
It makes me proud to know that my mom is busy stickering up the highways and byways from coast to coast.
And in a twist of small worldness the likes of which I rarely see, as it turns out Sucka Pants’ sister, Sista Pants, is the nanny of one Mr. and Mrs. Loudass.
It just goes to show that wherever you go, there you are.
Of course I can’t go without mentioning that Sunday morning at 4:00 am, I could be found watching a live streaming of the 2010 Cross Worlds in the Czech Republic, at which of course, Stybar had a heroic performance taking gold for the elite men;

He also has to be credited with the quote of the year calling his victory in Tabor “a cherry on the cake” after a stellar season.
I like that kid.
With that, I bid you a fond farewell until Friday at which time we’ll do it all over again.

11 Responses to “Back on the trolly.”