Before I get down to business, I should mention that the newest AHTBM product has finally rolled off the assembly line;

It’s innovations such as this that has me on the fast track to becoming one of America’s youngest self made millionaires.

Though they are available for shipping now, my attorney has temporarily but a hold on them going out due to what he referred to as a “glaring misrepresentation of product”.

Obviously it’s been a few days since I’ve been through here, but Gary sent me an email and a nice little video accompaniment just before I left;

“Got this video of you riding over the weekend. Nice form.”

Nobody ever said that the All Hail The Black Market training camp was going to be easy.

You knew what you signed up for.

Well, I’m back from the badlands, and have nary a story to tell, short of time spent with babies, and taking upwards to three naps a day. I did have the pleasure to spend an evening drinking beer and picking the brain of Lanolin from one Ritte Racing, pictured here looking at home getting acquainted with some of our fellow bar patrons;

Once he finally settled down, we drank some drinks and got cracking on solving some of the world’s problems, which we did with quickness. He shared some of the secrets of his empire, while I in turn shared some from mine. Finally, as the witching hour drew near, we beer bonged our final double vodka and sodas and then stepped outside to say our farewells. It was then that he bestowed upon me the greatest of honors; a Ritte t-shirt, water bottle, team kit and official invite onto the professional roster;

(It should be noted that the official invite is not pictured due to the fact that as this is being written, I have yet to unpack, therefore have been unable to find it in my vast collection of Louis Vuitton luggage.

Anyway, it was great being able to have my first face to face with the man since our revolutionary interview that literally is still changing the face of the bike industry.

Photo by D. Pountain
I remember it like it was yesterday.

Though as you might dare to guess, the world doesn’t just revolve around me, and this is proven day in and day out by the forever evolving mail bag.
Today we can get the party started with a short and sweet one from DPow!;

Gawldamned if ah don’t loves me sum emails from DPaow!
They always leave me feeing hopeful.

Jesse from down SLO way (where I will be in a matter of days) emailed me with a race report of the most detailed kind;

“Stevil,
Thought I’d write in with a short race report from last weekend’s Keyesville Classic. The picture pretty much says all that needs to be said for our good friend Jim. His frame snapped in two while going uphill on the short track course. Race officials DQ’d him from the All Mountain class where you have to use the same bike for each event (XC, short track, and DH). Jim’s freakish ability to generate torque was not disputed. 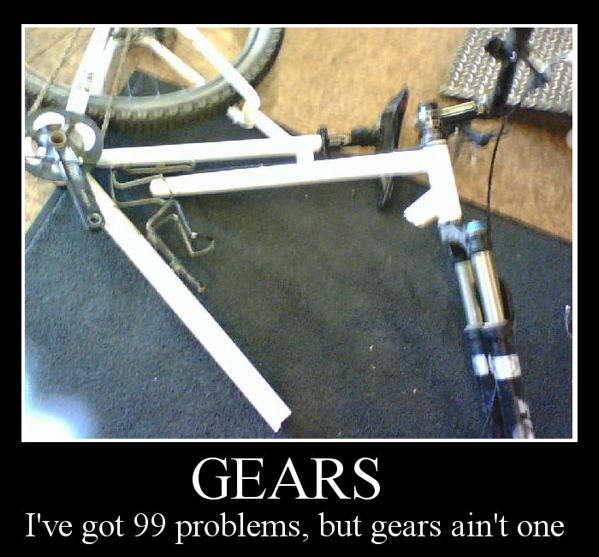 Speaking of having to use the same bike for each event. Apparently you’re allowed to change your single speed gear ratio between events even though the race website (and precedence) clearly states no parts changes. One guy in our group who shall be forever known as “The Gear Changer” exploited that by switching to a 38/11 after the XC to use in the short track. Taking the race very seriously he proceeded to dominate against everyone else’s 32/18s and 32/16s. Oh well…it was still a top notch event.
Jesse
SLO”

Firstly, never before has a coupler bike been so easily obtained.

Well, considering the fact that I am just touching down and still have to get my act together to get out of town again, I will pull the plug on today’s installment.
Not that you care, but I will soon be on my way to the upcoming San Diego Custom Bicycle Show with El Honcho Superior Pirata Fuerza of Soulcraft Bicycles (who has a new website, by the way) if for no other reason so that my man can finally learn how to weld;

Seriously, his skill with a torch is just shameful.

Hopefully there will be lots of polished chrome saddles and other random useless crap for us to behold, but assuming that that particular wad was blown on King Don’s dog and pony show, I suppose we might just have to settle on plain old custom bicycles. No bells, no whistles.. just practical, well made bikes.

So until Monday, I leave you with this shot from Tanner;

You can thank me later.