Life is a funny thing. One minute its waving its left hand and just as soon as you concentrate on that, the right one comes slapping you across the face.

Of course I don’t mean this in the literal sense, but after this past weekend.. one that was supposed to be filled with amazing good times, and bikes and beer but ended up being filled with phlegm and motor oil, I feel like Curly after Larry and Mo have had their ways with him.
Between falling victim to a raging Spring cold and tearing all of the skin off of my knuckles and filtering out about a pound of dirt from each eyeball while installing a new $77.00 starter on my truck, (which, as it turns out, wasn’t the reason my truck wasn’t starting) I’ve come to the realization that the universe will do its part to ensure that you don’t have too much of a good time, too much of the time.
It’s as if all of us, with the exception of rappers riding around on giant yachts where the Champagne flows like water, and a beautiful woman is never out of reach, (which apparently is all of them) are subject to a sort of universal fun-governor.

Though simply based on the sheer volume of middle-of-the-night texts and phone calls I received from the Sea Otter venue, the fun governor wasn’t spread far and wide across the land, but rather located locally right above my head. However, just as the gloom was approaching, I was treated to two days with my family, and that makes all of the other grief totally inconsequential by comparison.
Anyway, for what it’s worth, I’ve simply learned to roll with the punches, which is ok by me, and until my incessant hacking goes away, I will continue to lie beneath by truck with a puzzled look across my face, waiting until it’s once again my turn to get down.
Moving on to other matters, as you might could imagine, during my recent absence the mail bag has gotten filled up with the standard array of nonsensery that you’ve come to expect and just as sure as I’m sitting here with my face in a steaming bowl of menthol-infused water, it’s rearing to get posted.
Let’s start it off right with a simple shot sent in from BIKE Magazine photog, Morgan Meredith;
“Burt knows delicious.”

Fyxyamacallit we get the announcement of yet another invitation to any and all to the land down unda’;
“Stevil
If you ever had a good excuse to come over, this is it.

400 registereted (thats the limit) but I can make a spot for cycling / ex messenger royalty like yourself.

Hale is certain to be the mad belgique on one of the sectors as always and do himself a mischief after too many Jamiesons.
Andy”
Who knew five years of burning tags, being drunk and passing out on the last train East would result in such a prestigious title as ‘ex-messenger royalty’, let alone inspire invitations to exotic and far away lands.
God only knows what might of transpired had I just applied myself.
Now, for immediate release, I present to you the latest offering from someone who actually is ex-messenger royalty, 685;
“The attached images are a result of one and a half years of research, design, prototyping and testing of the newest offering from PENTABIKE INDUSTRIES.
The HANDLEBAR MUSTSTASH is a machined aluminum canister and ‘snap’ fit lid that can be ‘stashed’ away within the end of your handlebars in place of those rubber or plastic end caps; 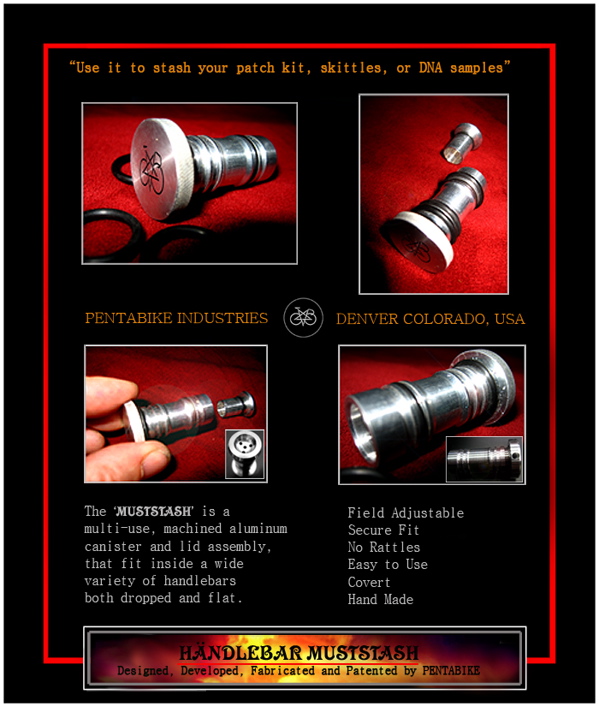 The device is field adjustable and can be fit to handlebars with an ID of 17-21 mm through the use of several multi level groves in the main body and o-rings for a tight friction fit even in tapered bars.
Each unit is machined in Denver, Colorado of 6061 aluminum and laser engraved with the PENTRABIKE logo on the end cap face; 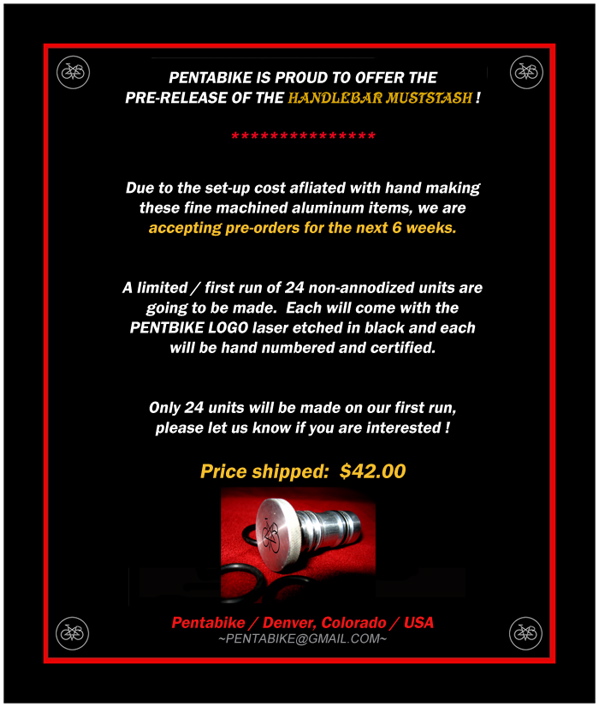 An initial first-run of 25 units is being made to test the waters for percieved interest with larger runs in the future if substaniated.
The first 25 units will be offered only in the natural aluminum color and hand numbered with your choice of a 3 digit alpha-numeric serial nmber.
Annodization of the unit is available for an additional dollar. Color selection is limited.
If your bars have an inside diameter outside the 17-21mm range or are cut, chopped, fucked, jacked, unusual or modified, you may need to get all crafty-n-shit with your installation.

Cost for each complete MUSTSTASH is $42.00 shipped to you door.
PENTABIKE: Ego Operor Non SentioTardus”
So, not that it needs to be said, but obviously my man is a bit of a mad scientist with a penchant for a handy nug, so if you find yourself with an appreciation for the same, The Muststash will surely be a must have.
Speaking of random stuff on which you can spend your hard earned cash, my shipment of AHTBM cycling caps have finally arrived, all pending orders for which have been shipped. 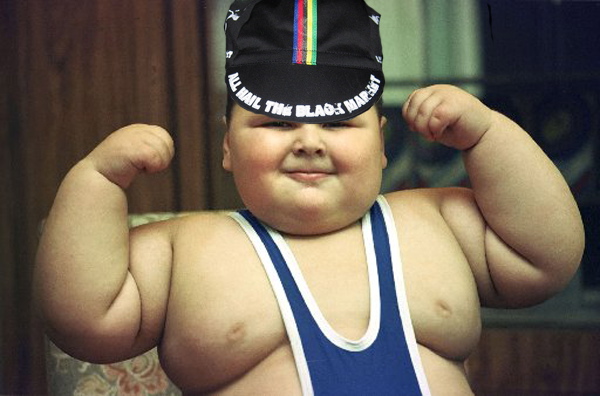 The rest are sitting, waiting patiently for someone to give them a home.
Finally, I now present for your edification a clip sent from Austin, containing every form of bicycle Kaos starting with a capital K;

As I told Austin, the first time I heard that song, I was fourteen years old, sitting at Mike Johnston’s kitchen table, and high as hell. Though it is entirely possible that I had just smoked some oregano, and the whole experience was psychosomatic.
Either way, it made an impression. Not unlike that made by the video, which brings to mind images of Skatopia.
But I’m thinking of something else…
A Biketopia, if you will, complete with the Human Powered Roller Coaster, miles of single track, a mini-drome, an on-site bar, dozens of fire pits, and JMac behind the grill.
Oh, what I could do with a hundred acres…
Before I go, I should also mention that everybody’s favorite Bike Snob is about to embark on his first whirlwind tour during which he will be reading from his book, fending off attacks from adoring fans, and very possibly signing autographs with his gigantic novelty pencil;

However I cannot promise that his nails will still look as good as they did on the day he signed my copy.
Alright then. The time has come that I return to letting the gods have their way with me, because as you know, everybody deserves their turn having fun.