Truth be told, I don’t even remember the first act, so I don’t guess it was that good.
The second one is almost guaranteed to be better.
Like I said on Wednesday, I’ve been in the process of shaking out the sheets to see what may have been left behind due to my general state of confusion. (Hunting for second acts tends to take an extraordinary amount of energy.) As such, I still have a broad array of correspondences that I am attempting to figure out a place for. It’s like assembling a jig saw puzzle with no edge pieces while wearing a welder’s mask, and believe me, that’s something I wouldn’t reccomend.
However, for the sake of consistency, I will give it a go, so sit back and let me let ‘er rip.
Before we get into anything, I have to mention that while perusing the news of my beloved home state on Wednesday, I came across an article that puts a whole new spin on the term ‘bat-shit crazy’;
Denver’s bike riding agenda threatens to steal your daughter’s virginity while simultaneously bringing on a plague of locusts.
Yeah, put that in your pipe and smoke it.
The lines between hysteria and pure comedy gold are becoming infinitely blurred. Case in point?
Christwire blames gays for solar flare-ups.
If you have not become familiar with Christwire, I suggest you do, post haste. It blows The Onion out of the water.
Even though the gays are busy messing up the sun, a certain Honorable Vaughn Walker overturned the controversial Proposition 8. Gay people have the power to wreak havoc on the atmosphere AND get married? That would never fly in Colorado.
Or Arizona.
Or Texas.

Photo by Scotty Heath
From the A-Train, I got this totally unrelated but of news;
“I’d invite you to participate (in your own way) a celebration of sorts we’ve reinvented in the sticks up here. We’re calling it Tall Can Fridays. Here’s how it works:
1) Wait for oh, 5:27pm of a Friday, then start bringing bikes in from out front.
2) Once all the bikes are in, turn off the ‘open’ sign and begin drinking tall cans.
3) Revel in the general kookiness that is the demographic of folk who come by a bike shop when the open sign is off on a Friday evening. This includes – but is not limited to – Christmas John and his disciple, Uncle (tweakers of the highest order), the owner of the shop, and that one guy.
Unfortunately, Tall Can Fridays have gone off the rails in the past few weeks, and we now unofficially celebrate tall can Saturdays, Tuesdays, and Wednesdays, to name a few.
In real news, the Paradise Royal trail and the pump tracks at the Tolkan campground up here in the King Range National Conservation Area are the shit. Camp, ride a stellar and ball-chokingly long 14-mile loop, race the pump tracks for beer and glory, repeat. Enjoy all that southern Humboldt has to offer. But most importantly, ride some singletrack that IMBA made, and made really well.
Example one.
Example two.
Well, that’s all I’ve got. Enjoy your freedom before we’re all appropriated by the U.N.
A-Train”
My boss has been making noise about giving me some vacation time recently. That looks like as good a place to use it as any.
As long as we still have a slight taste of insanity in our mouths, why not add to it with this email from Matt;
“Get your bling on. Or not.”; 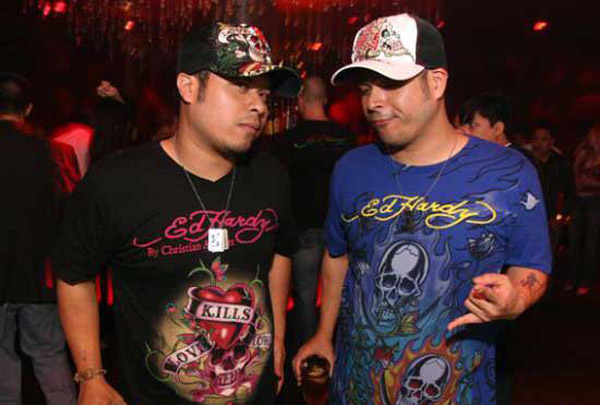 Perchance do you think it might come with its own bottle of hair cologne?
Now just as a favor to you, and to try and get beyond the unpleasantness that some of today’s post has had to offer, here is a photo of a little dog named Linda;

Doesn’t that make you feel better?
Morgan got me this clip with a note that simply said ‘radtarded’.

I’m not entirely sure about the ‘rad’ part, but they’ve got the ‘tarded’ part on lock.
From my newest vendor as well as friend, Andrew Black of Blackbook Stencils, I received this quality example of art that doesn’t suck;
Wilhelm Staehle’s Silhouette Masterpiece Theatre;

This work is similar in content, and execution as that of a Ms. Kara Walker;

While a mere image hardly does her work justice, she has long been one of my favorite visual artists due to the sheer power of the message she conveys.
Three legged slave girls being assaulted by their owners, while out of the cotton fields, all manner of horrific fate comes crawling towards him from behind… I have been lucky enough to happen upon two of her installations over the last decade, both times leaving me completely transfixed. Should you ever get the chance to see her work in person, do yourself a favor and jump on it.
While being entirely different from my own, Kara makes art that makes me want to make art, and from my corner, that is an awfully invaluable quality.
In news of the AHTBM whirld, I am proud to bring you the latest in an upcoming series of product designed with you in mind. The All Hail The Black Market/Push Bike roll top messenger bag, graciously modeled here by the lovely and talented Ashley;

A black screen print to maintain subtlety also happens to be reflective.
According to Ian (the man behind the machine), the turn around on these should be relatively quick, and will probably fall in right around $150.00 retail.
In an email he sent to me concerning the bag’s specifics, he stated the following;
“The bag is made from 1000 denier Du Pont cordura with a fully floating 18oz truck tarp vinyl liner. Closed, the bag measures 18″x14″x6″ so the volume works out to 1512 cubic inches, that’s 558 jiggers or 25 liters.”
In preliminary tests, I’ve concluded that this means you can easily transport 66 cans of beer with room for a couple of porn mags and a few sandwiches, which of course is proper luggage for anywhere your journey takes you.
For additional detail shots of the unit, go here. I’m still in the process of working out a few final sticking points in my shipping module, but should have these available for pre-order in the market shortly.
It is with that that I say ‘it’s Friday. Don’t forget to party’. That’s good advice for the first, second and third acts.

16 Responses to “Because the first act was such a rousing success..”