Holy crap, happy November everybody. I’m not sure how that happened, but October was over before it even started.
Plus my landlord still hasn’t received the September rent check yet.
I’ll be big ballin’ shot callin’ and living in a box before you can say “yo brother. Are you gonna eat them leftovers”
Just as I wrote the above passage, Angel emailed me the following clip;

This reminded me of the two dumbest things I’ve ever heard any one utter.
Number 1) I was in car in high school with two of my sister’s friends, Nikki and George. During a conversation about various learning disabilities, Nikki very confidently declared an example of visual dyslexia was when one would see a stop sign, and think that it said go.
Number 2) During a class I took in college, the teacher was attempting to simply explain an idea by using an example of the lobes of our brains and their relation to our eyesight. He said “it would be like if you were to cover your left eye and look at an apple. You would know what it was, but not what you were supposed to do with it. Likewise, you could cover your right eye, and look at an apple and know what you were supposed to do with it, but not what it was.”
A moment later, a girl that I was dating at the time said, “so if I were to cover my right eye and look at an apple, I wouldn’t know what it was?”
Shortly after I picked up the pieces of my shattered jaw off of the floor, we broke up.
While we’re on the topic of varying intellectual capacity, and just so you don’t think I’m in anyway placing my own above anyone else’s, I went to see the Jackass movie this past weekend. 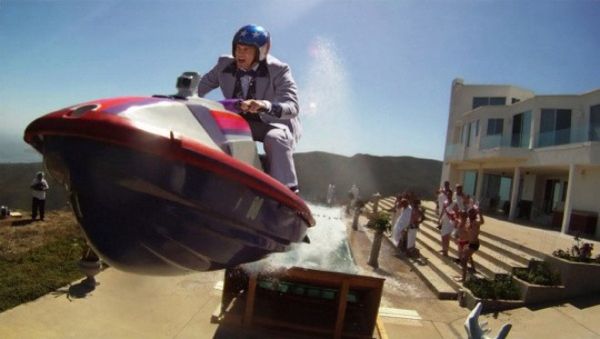 Now then- in my book, anyone who spends fifteen dollars on a movie might be subject to ridicule. Anyone who spends fifteen dollars on a movie filled with more poop and pee jokes than a middle school boy’s locker room is not only subject to ridicule, but it is almost a requirement. However anyone who does both of these things and actually enjoys themselves is either an emotionally stunted pre-teen boy, or a developmentally arrested 40 year old man.
Sadly, I fall into one (if not both) of those two camps. Generally I’m neither here nor there with Jackass’s flavor, but this one struck a chord.
As people one by one walked out of the nearly empty theatre, I howled with laughter, nearly choking on my spit in the process.
That being said, unless you’re me, which I’m pretty sure you’re not, I don’t recommend anyone go see this film.
One thing I can and will recommend is this coming weekend’s SF Bike Expo;

Last year, Phil and his team of visionaries, along with Bike Monkey Magazine put on an event unlike any other I’ve ever attended. So many good people and such a fun time… Whether you are into dirt jumping, cross, lowrider bikes, or are just looking for a deal on some wares, this is the event to attend. Only when you are in the midst of the run up from Hell;

will you be wondering why you made the effort.
This next bit of news has nary a thing to do with any of the aforementioned aside from the fact that in about fifteen minutes it will have escaped your consciousness entirely. A fellow named Josh contacted me recently with a request to do a phone interview for a project he was working on spotlighting a random smattering of people within the bike industry.
Insistent that I be given the chance to do it via email on account of my siren-like voice often makes people wander into walls in a blissful haze, he obliged.
What we came up with was the following account;
The Bicycle Story(dot)com.
Musta been a slow day in his news room.
Now as we jump from that topic to the next, Kevin sent along this video that perfectly embodies grace, and beauty, and passion, and perfection;

For those among us with a penchant of internal combustion, there you go.
Finally in closing, in response to an email I received from Stoopz, I offer a small gesture of help to an understandably distraught young woman;
“YO DAWG,
I KNOW YR NOT THE PENNYSAVER OR THE FUZZ, BUT A REAL GOOD LADY’S REALLY REALLY NICE BIKE WAS TOOK IN BROOKLYN.

IF U CLD MAYBE ASK YR POSSE OF NE’ER-DUDE-WELLS TO KEEP AN EYE PEELED…
-STOOPZPOOMZ”
I hope that this opens a few more eyes on the matter and the good lady will soon be reunited with her precious.
From my perspective, I maybe would have thought about different bar bike.
Secondly, I don’t call Brooklyn ‘Portland East’ for a number of reasons, but primarily because it’s Brooklyn.
I can’t make my leave without mentioning the recent election. The idealistic, and hopeful side of me would like to say that yesterday’s shift is simply a balancing of the power in this country’s government. However the pessimistic and worrisome part of me feels like we, the voting public just set the stage for some really dismal shit to go down in two years.
Please, I am open to any and all perspectives on the matter, as politics has never been anything that I have been able to entirely wrap my mind around. With the momentum that the Tea Partier screwballs have somehow gained these last twelve months, and the monumental shift that just occurred, it seems to me that we just took one gigantic leap backwards.
But then again, maybe I’m just dumb.