That dude from Uriah Heep has got some chops;

Hey, what say we get into little bit of product nonsense, shall we?
Handsome Marko Lalonde from Planet Bike notified me that they just released a new rear blinky, which they also thoughtfully sent me one of to help light my way.
I mean, I guess if I were going backward.
Anyway, said light looks like this;

And after repeatedly looking into it in an attempt at some how capturing the light’s power with my camera, I looked like this;

Suffice it to say, it’s real damn bright.
Don’t take my word for it though. Here it is from the horse’s mouth;
“In 2006, our introduction of the Superflash tail light ushered in a new era of innovation in bicycle lighting. Building on our tradition, we are now proud to introduce the evolution of bicycle safety: the Superflash Turbo. We paired our time-tested design with a powerful 1 watt LED, then added the new attention-grabbing Turbo flash pattern. It’ll give you peace of mind riding day or night.
*Superflash Turbo tail light (#3070).
*1 Watt Power LED plus 2 red LEDs for visibility up to 1 mile.
*New attention-grabbing Turbo flash pattern.
*Soft-touch power switch accesses flashing or steady mode for up to 100 hours of run time on two AA batteries.
*Ultra compact vertical design is weatherproof, lightweight and durable.
*Includes bike mounts and clip mount for multiple mounting options.”
Personally all that jargon kinda goes in one ear and out the other, but what it means is that Planet Bike has stepped up their game and at roughly $30.00, their Turbo is a force to be reckoned with.
Let’s see.. What else do I have?
Oh yeah.. Last week I was invited to an I.M.B.A galla held at Specialized Bicycles World Headquarters. Why I was personally invited by I.M.B.A. Government Affairs Director, Jenn Dice, or why I was even allowed back into the building after my journalistic suicide that was HTC/Highroad press camp is still up for debate. Whatever the reason, Complayna and I marched in like we owned the place, and as I drank from my smuggled stash of Oly, and piled my plate high with snacks, we listened to the I.M.B.A. honches talk about all things regarding their hard work in trail access, and land access issues.

(If a bomb where to have gone off in this room, nearly every single power player who ensures that you have trails on which to ride your bike would have been taken out.) 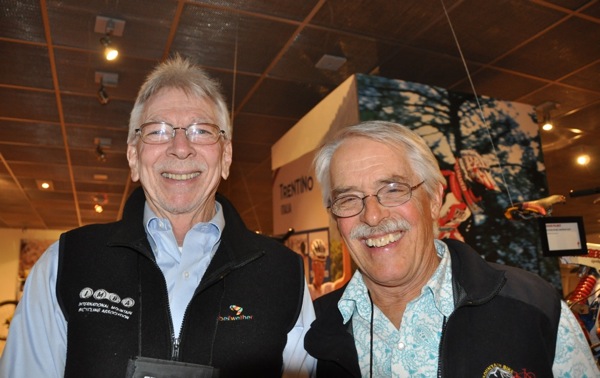 Photos shot by Nat Lopes
In comparison to my all too infrequent trail maintenance days, the work that these people do I suppose goes largely unnoticed, but is surely vital to anyone who happens to engage in mountain bike related athletic pursuits. If you have not become a member, let me encourage you to do so now.
As far as that goes, Santa Cruz Bicycles lead designer Joe Graney got in touch with me regarding a very similar topic;
“Hi Stevil,
As a lover of all things that are making places for people to ride bikes, I’m writing to ask you for some support on your blognation an initiative that SBTS is doing to try and get some steady money coming in, while having people be able to make an affordable but regular donation. For the cost of 2 macchiatos or one pack of hamms a month, you can be a “core member” of the stewardship.

There’s also a program to try to make some new trail maps, of legal, maintained trails for cyclists, you can read about here .Thats a one time donation for that.

Photo by David Lofink.
Your support and promotion is needed and appreciated. I’ll spare you the sob story. Good people, doing good things and needing some spreading of the word. The last couple years have been hard since everyone’s been short on paper.
This is where you could tear open your shirt and reveal the big S leotard underneath. (Editor’s note- I have a ready-made substitute.)
A couple of well placed calls to action takes less time than cutting sticks for mud puddles. I’ve been asking people to also ask the company they work for if they can make a corporate contribution. They get name recognition on trail signs and its all tax deeeductible. This link is one that is more about corporate level donations.
thanks mang, i hope alls well with you.
Joe”
The long and the short of this I suppose is that if you ride a mountain bike, it is paramount that you become involved. We are the smallest voice in the debate concerning land access, and wide spread apathy on the matter will only result in our opinions being ignored.
Now, as we make the natural jump from trail access back to blinky lights, Joel presents us with his latest effort;
“Stevil,
Our boss somehow is still letting us make these silly videos promoting bike light use.
I hope you like it!”

Sick skillz, bar spinz, phat skidz.. Yeah, I like lights for all of those things.
Interestingly (or not, depending on if you have an appreciation for such things) just after all of the other light related stimuli arrived in my domain, Dpow! from Portland Design Works (Minneapolis West Design Works, donchaknow?) got ahold of me with this;

If by chance you might want to get this fine ad in a large size for your own devices, all you gotta do is go here.
So what have we learned today? Even dirty hippies can get rad, we know lots of nice people who make nice lights, it is all of our duty to actively engage in the political arm of trail access, track standing is awesome, and only stupid people stare into rear blinkys.
Class dismissed.

9 Responses to “*Driver not included.”