An event for the ages has come and gone, and with it, most of my capacity to formulate cognitive thought.

See, I don’t even know specifically what ‘cognitive thought’ means. That should sum up where my head is at.
What I do know is that some of Northern California’s best and brightest rolled their finery into San Francisco’s Una Pizza Napoletana this past Sunday for the previously mentioned custom bike and handmade bike part show.
The event started leisurely enough as The Hunters and I sauntered in fashionably late due to the fact that we had to drive extra slowly to ensure we wouldn’t need to utilize my haphazard seatbelt fix;

As the crowds began to swell, bikes were still being set up around the room in such a way to best facilitate optimum viewing. Soon enough however, it wouldn’t matter as bodies were packed in so tightly that actually standing back to look at any of the goods on display became an impossibility. It was about at this point that I decided to forget any attempt to document the bikes, and just go for broke, get drunk and take photos of whatever or whoever happened to be in front of my camera at the time. 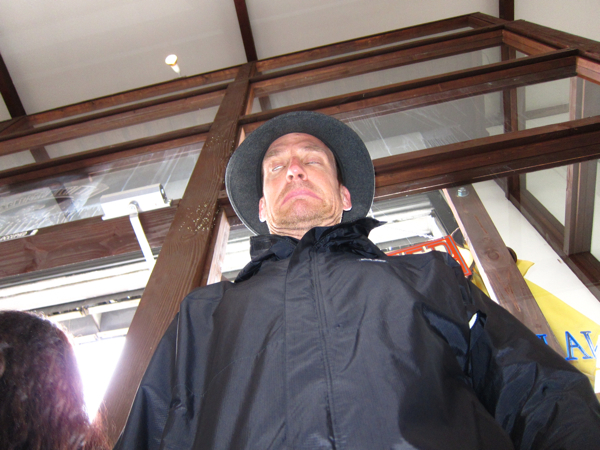 And the reason that I ended up with so many crappy photos can be summed up with a single one;

If by chance you might like to see a slew of photos of the event that don’t suck, then might I direct your attention here?
Ultimately I woke up in the backseat of the Hunter’s car wearing two hats at the same time, as we pulled into the parking lot of an English pub. To say that it was fortuitous that I’d just come across Monday’s translation chart is an understatement, but just the same, our server seemed puzzled when I told her I wanted to suck on her slappy ham.
And speaking of suck worthy slappy hams, The Diamond Wizard from Planet Bike sent me the following clip of Katie Perry making beautiful music out of hers;

It’s with that slice of goodness, that I say however one might choose to define ‘cognitive thought’, it’s obvious that today’s post took very little.