The cat was finally let out of the bag on Monday when I posted photos that I actually took a year from now;

Being that I live in the future, you might take some comfort knowing that, at least for the next twelve months anyway, Jesus never comes back in his spaceship to take the true believers away, leaving all of the rest of us here on earth to wallow in a world without individuals who believe that killing people in the name of God, America, and apple pie is ok, (as long as they’re brown), but killing an unborn child who was conceived from rape is not.
But I don’t always exist in the there and then. A good portion of the time I am in the here and now, which is a good thing on the chance that Loudass should send me a gem such as this;
“Orbea with Tweeker Roll. Break out the chocolate milk and black licorice.”

Though the bar and saddle position is almost a dead giveaway that this bike is stolen, the fact that the clipless pedals haven’t been removed with a pair of channel locks, only to be replaced with some platform pedals (cross threaded, natch), leaves me feeling a bit curious about this bike’s present existence.
I suppose the only way to tell for sure would be to inspect the top tube for the tell-tale corrosion caused by drips of meth sweat, but after years of working in a bike shop, if I never have to contend with that particular biohazard again, it will be too soon.
While we’re skimming the creamy weirdness off the top of the mail bag, I will include this clip sent to me by Brent;
“Here’s a little nugget of confusion. Evidence that America is fucking the rest of the world by the skull…or maybe just some Russian kids smoking plastic….wait, did he just shoot that zima straight up…

Russian kids acting like latino gangstas…or grungecore fags…I’m cornfused.”
I don’t know what a ‘grungecore fag’ is exactly, but there really is no doubt that these kids were carrying several jugs of random Western influences when they fell down the stairs and came up with the concoction that they have here.
Moving on.. Randy came through with a site that I’ve seen a little bit of during my travels through the interwebs, but is certainly worth a go around here;
“Not sure if you’ve seen this but Oh-Em-Eff-Gee. Like, totally.”

I’m a big fan of the sort of visual stimulation that reminds me just how far down the ladder I am in terms of my own skill.
The Pale Horse is no joke.
What actually might be a joke is the subject of the following email that was sent to me by J-dub;
“Stevil,
While perusing obscure links on that one bike site I saw this gem;

© International Tour of Hellas
Which lead me to this.
Maybe the best kit/name combo ever. They could have chosen something other than baby-dump green for their kits.
Best,
J-dub”
Baby Dump.. That’s what happens when the team director asks their four year old to name the team, though I suppose that was better than the alternate, ‘Team Poopie Head’.
In other news, a matter that has been on my plate since December and has finally come to a head, is a subject that you very well might have heard murmurings about in other corners of the internet. It seems as though Levi’s has undertaken a project in which they are launching a line of bike specific denim jackets and pantaloons.
Upon first learning of this, I was skeptical but as I conversed with Rob from Echos Comm during the concept’s inception, I became intrigued. At the risk of Levi’s snipers taking me out, I’ll simply include a specific bullet point from our discussions for your consideration here;
“The Commuter Collection has elevated the brand once again as an industry leader by continuing its legacy of product innovation. Levis is the first company ever to integrate Nanosphere technology into the denim fabrication, which is groundbreaking for the entire denim industry. This performance innovation integrates Nanosphere, a naturally self-cleaning fabric with a reliable protection. Properties of this technology are breathability, water and dirt repellency, as well as an anti-microbial feature that will reduce the bacteria odors while providing a stretchable, yet traditional denim look.”
On Wednesday I met up at the not-so-secret downtown San Francisco hideout, which looks like this;

that I arrived to on my bicycle, which looked like this;

for a meeting in the tailor shop that looks like this;

with Je Won Yu the designer, Jared Everett the tailor, and Rob Reedy the liaison/marketing figure where I was treated to a first hand look at the garments in question;

The jackets come loaded with features, from venting, and tons of pockets to tailoring specific to one’s varying positions while engaged in the activity of bicycle machine riding;

The masterminds behind the water resistant properties possessed by this line is a Swiss company called Schoeller, and because I don’t trust the Swiss further than I can throw them, I decided to take matters into my own hands when I defiantly emptied the remainder of my morning jigger of vodka across the jacket to see for myself;

As I poured myself a new shot, I was heard murmuring something about “.. like a duck’s back.”
Next as we rolled out the ‘draws, I was treated to a whole new array of cool features; 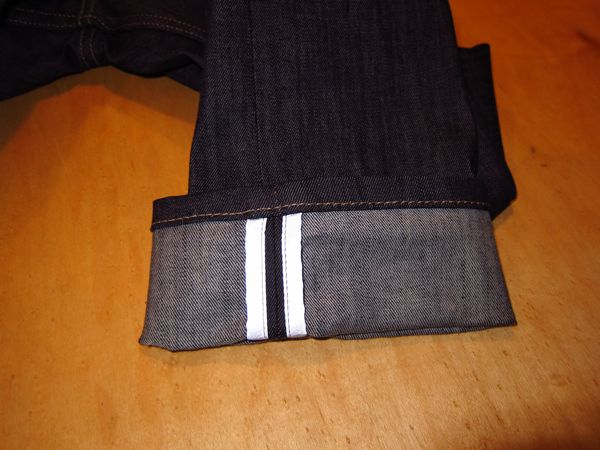 (It should be noted that though Levi’s has never won a UCI World Cup event, they have still opted to use the colors. This may or may not anger purists.)

It’s all pretty badass stuff, and what I was most taken with was how soft it was, but then again, I’m a slave to comfy clothing. Finally, the estimated retail for these items is not as prohibitively expensive as I would have assumed. At an estimated $78.00 dollars for the jeans and $128.00 for the jacket, It’s steep, but for all that you get, from my perspective, it’s worth the price.
That is if I ever had more than $30.00 to spend on a pair of pants that I wear until they disintegrate.
Clearly I’m an unqualified gauge for this conversation.
Anyway, This entire project was initially introduced to me by Billy Sinkford (who’s towing a whole different set of lines in it) and Rob, who have thoughtfully included All Hail The Black Market in a small and select group of self important nobodies to help promote the line with a limited run of custom branded jackets, of which mine will look something like this;

(Super secret spy photo)
It certainly is an exciting development for All Hail The Black Market, and I can’t thank Rob and Billy enough for my inclusion. There will be several parties held around the country at which this line will debut, and when a schedule becomes available, I will certainly keep you informed here. As water repellent as these items are, there was no word on beer and cocktail repellency, though I suspect that will be thoroughly tested come the time of those events.
As I stand before you in the here and now, I vow to only sell out in small steps and never leaps and bounds.
At least that’s the way things look through twelve months into the future.