As you all are well aware, this past Sunday saw the 589th running of the Ronde Van Vlaanderen, and with it, feats of heroism and strength not seen since the director’s cut of ‘300’ was first released on Blu-ray; 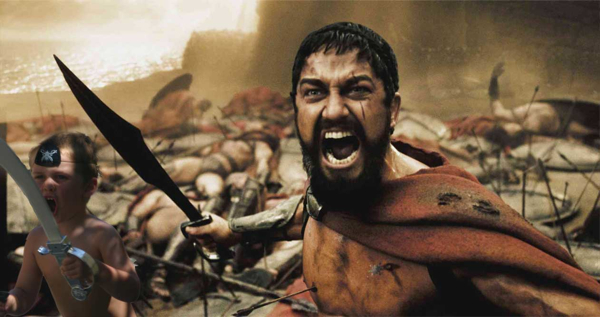 With a crappy Papermate pen in one hand, and the screen shot button in the other, and then occasionally a can of coffee in the other, and a pad of purple Post-It notes in the other, I was furiously documenting every moment of the final twenty minutes of the race. I didn’t document anything that happened before that, because I was sleeping, and generally don’t do much when I sleep other than have dreams about finally winning the love of my fifth grade crush, and realizing I flunked one of my classes in middle school, thereby nullifying my entire secondary education, forcing me to have to go back and attend middle school again, only this time as a street smart and ruggedly handsome forty year old.
Include an occasional appearance by an Orangutan in a propeller beanie, and my dreams have ‘sit-com smash’ written all over them.
Anyway, as I was saying, the jewell encrusted and Wellington boot wearing godmother of all the classics went down this weekend, and if you were a genuine nerd, who is crazy about the bicycle racing, you too were awake before anyone else in your home, taking in the action.
Though if you were a genuine nerd who is crazy about the bicycle racing who happens to possess powerful skills of observation, you were undoubtedly signed into the live messaging on the right hand side of the feed;

I for one would like to thank dkhhdhhsss for adding their two cents, thereby aiding in the betterment of everyone.
Then, if you were just plain crazy, you were standing in a field in a bike race, declaring revelations;

As Cancellara and his wild sunglasses struggled for a second straight win here, he put the hammer down at the very spot where he so deftly (and figuratively) tackled Boonen last year and farted on his head;

The Frenchman, Sylvain Chavanel was having none of those shenanigans however, and stuck on him like smelly, and frog leg loving glue.
With just four kilometers to go, the pressure was mounting, and I desperately needed to find a release. “Ah!” I thought. The instant message board!”

The only response I received were others telling me that they too like to party, which only got me more keyed up, because if you know anything at all, you’re well aware that I’m the only one who parties.
Regardless of who does and who does not like to party (I do), the race continued on, and with just two kilometers to go, the battle for first was waged, as Belgish favorite Nick Nueuns went toe to toe to toe with giants Cancellara and Chavanel, and emerged victorious;

In all seriousness, (because bicycle racing is a very serious business, after all) Nueuns played his hand brilliantly, and as I sat on my ass, I felt sure his countrymen were very proud of the young Belglandian.
Now that we have that bit of business taken care of, I would like to declare Friday and possibly Monday Internationally recognized days of me not being here, as famed makers of the bicycles Mo Rebolledo, El Capítan Farty Pantaloons Grandé and myself will be stepping on it towards the lovely city of Ron Burgundy for the second annual San Diego Custom Bicycle Show;

With the exception that while threre, we stayed at what at this point is known as the world’s largest polished turd, and possibly the eighth gateway to Hell, our trip to the show last year was nothing short of a total gas, and I look forward to many more good times this go around.
Certainly if you reside in or around the area, and have a penchant for groups of bewildered looking people standing around in a big room on carpet emblazoned with dizzying paterns, then by all means, come by and say hello. 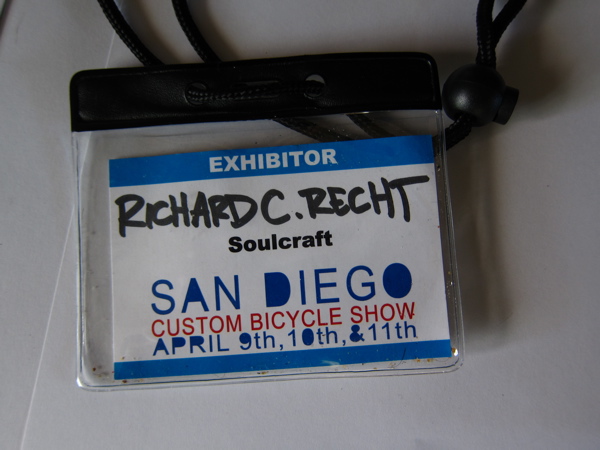 Just remember… My friends call me Dick.
You’ll recognize me as I will be the one wearing a Crash Worship t-shirt. Or possibly this one. Keep it classy, San Diego.
As we bring today’s report to a close, I’ll dip into the mail bag with a sweet one from Bobo;
“Does AHTBM have a crash replacement program?”

The answer to that is yes. It includes a strip of duct tape and a half a dozen safety pins.
Before I go, I would also like to include a little tribute I made to T.M.I.M.I.T.W.;

Something that the heros of this year’s running of Flanders, or even Bobo in the midst of an ass-tearing crash can certainly relate to.

3 Responses to “I run a bicycle related website. Today I will talk about bicycles.”