Where does one begin when one has been staring out a windshield, riding mile after mile of incredibleness, and/or breathing the flatulence of one’s traveling companions for ‘pert near a week?

At the beginning I suppose.

As I’ve mentioned many times over the past week or so, Soulcraft Sean, Rebolledo Mo and myself took a full on brocation down to the land of triathletes and 7-11s (seriously.. At least downtown there is a 7-11 every three blocks) for the San Diego show of fancy bicycles and whatever. For the most part however, we were simply looking to get away, and used that as an excuse to do so.

In all honesty, it was those guys who needed a vacation. The most stressful part of my day in any given week is realizing I’d been wearing my bathrobe inside out all day. Regardless, they agreed to me tagging along and showed up at the ass crack of 11:30 in the morning to load up and head out;

Before long we found ourselves at our friend Tim’s house in SLO where we promptly slammed two cans and headed for the hills where we climbed a little while;

Then after a while, we decided to mix it up a bit and climbed a little while more;

Finally at the summit, we bathed in the pay off; 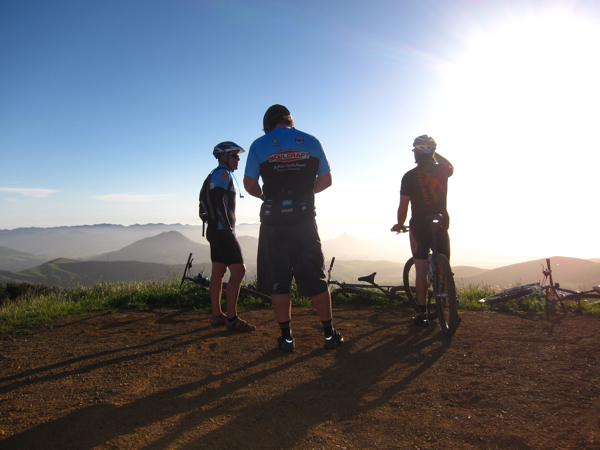 Eventually we made it back to home base, where we ate and slept the meals and the sleep of the innocent. Waking up the next day we packed up our goods once again and continued South;

Initially we had planned to get to Los Angeles and explore what little dirt they have available there, but at the last minute, Sean cranked the wheel hard to the left and we wound up in the quaint berg of Ojai, where you might remember I explored a ridiculously long loop with Friendly Paul a couple of years ago. I would include a link, but I’ll be damned if I know where it is. If it was on The Bummer Life, then it’s long gone, but I have photographic evidence, so I’m reasonably sure it happened;

Scoutmaster does work in 2009.

Anyway, instead of doing the entire loop, we opted for a 14 mile out and back up the final single track descent from the previously mentioned loop;

I like this shot, because the way the flash edited the photo, it looks like Mo has a tiny head.
It’s hard to capture the scope of this place with photos. When one thinks of Southern California, one typically doesn’t think of vast mountain ranges that span as far as the eye can see.. Or at least I don’t, but this place has them in spades. Once at the trail’s end, we ate some food stuffs, and turned around and turned it on in order to make it to Los Angeles by night fall. Once there, we made Kathleen’s apartment our own personal disaster area;

After nourishing our bodies at a spot on Sunset called The Griddle, where we were served by the most handsome waiter in the entire world, we packed up once again and continued with our directive. Once on the road, as if there was any doubt, it was confirmed that we most definitely were in LA;

And just in case you missed the meat of this photo;

Upon finally arriving in San Diego, we dumped our stuff off at the hall, ate more food, bought some drinks and hit the sack in preparation for the following day.

Before the show opened on Friday, we took the opportunity that we’d missed last year to go to the Olympic Training Center in Chula Vista, where they not only have several world class tracks;

but an amazing collection of BMX paraphernalia, which stirred my internal fourteen year old self’s soul;

While the museum was only just a room, it was packed so tightly with items that I had only ever seen in magazines as a kid, my head was spun around in circles in an attempt at taking it all in. When describing seeing the original panel of the Radical Rick strip, I found myself comparing it to the first time I ever saw a piece by Egon Schiele, which might seem silly to an art snob, but the influence that Damian’s fledgling strip had on my artistic direction was no less profound.

According to the clock, it was time to get to the show, so without hesitation we got cracking back towards downtown where we saw a bunch of cool stuff;

And some grumpy, but lovable people;

Day one blurred into day two and three, plus there were some beers drank, so I’m not entirely sure in what order any of the following photos were taken but for the sake of (in)consistency, I’ll file those here; 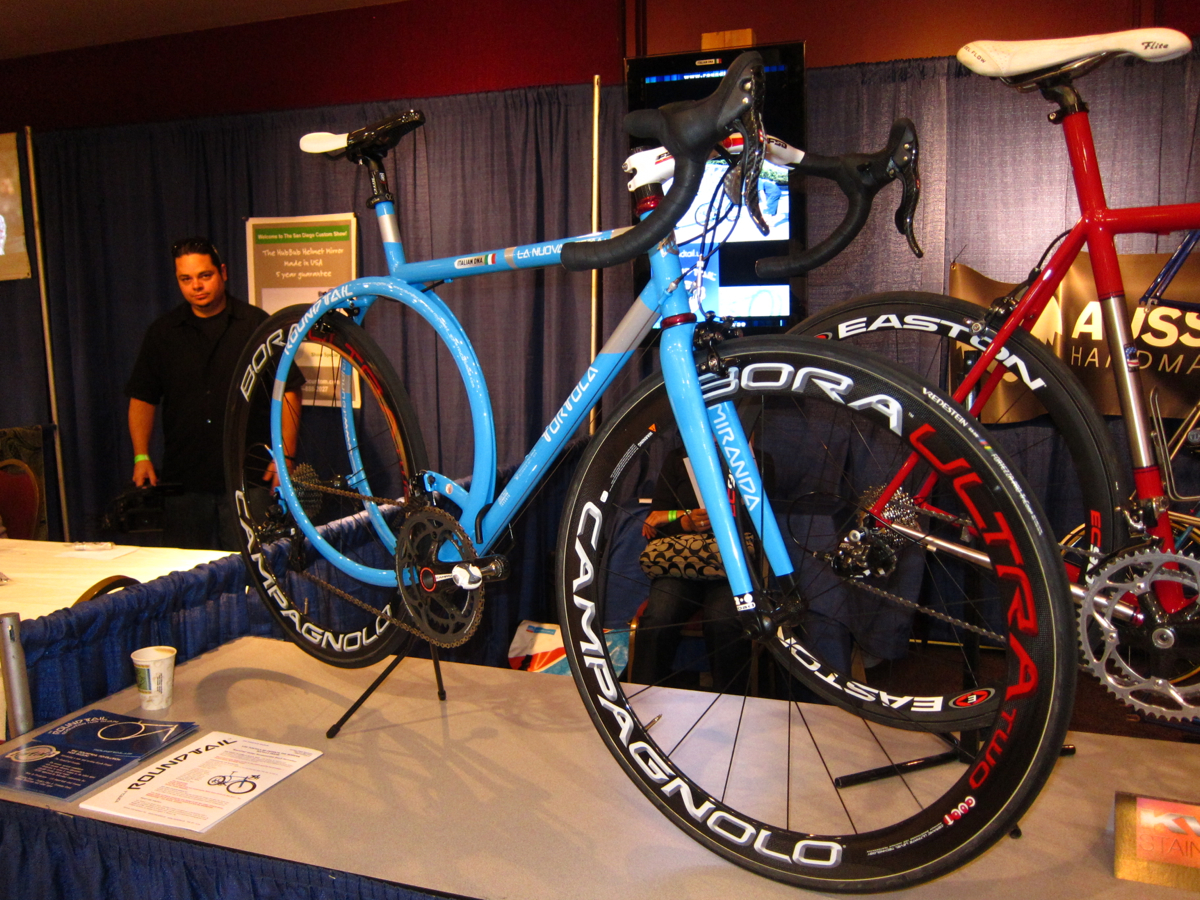 At some point Jeff from Monkey Likes Shiny challenged me to a wizard staff competition. For those of you who are unfamiliar, the process proceeds thusly-

You drink a can of beer, tape your empty to your new can, finish that, tape those two to a new can and so on. Never one to walk away from a challenge, I found some 7-11 brand duct tape and got to work; 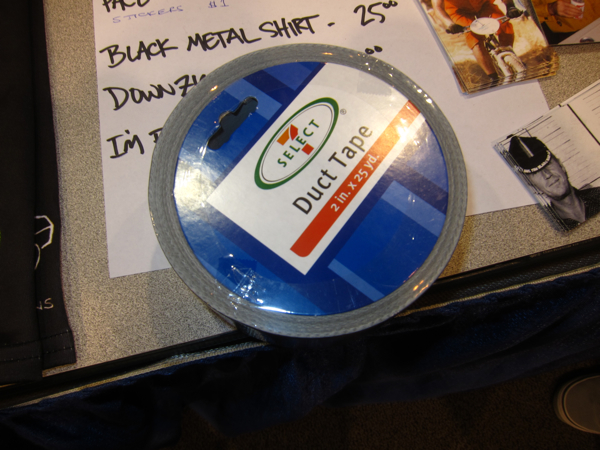 Suffice it to say, I won;

The feat resulted in 90 minutes of completely lost time, but I was proud to not only emerge victorious, but to have made a new friend in the process.

The following morning I woke up bright eyed and bushy tailed and headed over to the kick off of the San Diego Grand Fondo, where I found a sea of dorks that sprawled as far as the eye could see;

I also saw a lot of this;

Does anyone know how to say ‘big, big bro” in Italian?

After taking in as much of this as I could stand, I returned to the hall to finish up the last day, pack up our goods and get the hell out of dodge.

As per the usual, there were lots of fancy bikes, and fancy people looking at the fancy bikes, but out of all of that, by far the two coolest things I saw were the new Di2 battery pack that Mike from Calfee Designs happened into the booth with while on his way to visit Brent Steelman;

As I explained to Mike, no one I know can afford Di2, nor can anyone who reads this site (I suspect), but I was so taken with this that I had to post some information about it. As you probably know, the stock Di2 battery pack looks like this;

What Calfee did was take the stock battery, reverse engineer it, and not only make it smaller so that it can fit inside a seatpost, but they upped the original battery’s life by 20%. One two hour charge will get you 800 miles of riding time, and if one where to possess the stock Shimano harness, one of these batteries will run you only $150.00, which in comparison to the group’s almost $2,700.00 price tag is peanuts.

If by chance you would be interested in such a thing, the average turn around to have one of these installed is two weeks. I suppose what intrigued me the most about this is simply that a small company took a thing that would previously been thought of as a perfect design, and actually made it better. According to Mike, the powers that be at Shimano are pretty juiced by their efforts, and already have had a few installed in bikes for testing in hopes to get them on pro team bikes later on this summer.

I also liked that it looked good by a can of beer;

The second thing that struck my fancy was a follow up by a fellow named Joe McCrink from a company called KVA stainless. We met Joe last year and he was telling us how his grandfather had started this company and while they had long been in the trenches with standard steel production, Joe was very excited about the prospect of engaging in an arm of the company that focused solely on high end tubing for bicycles;

If you ask any frame builder questions about tubing suppliers, you will most likely find yourself on the receiving end of a tirade involving inconsistency of quality, availability and/or price. The thought of a company of that size investing in the tooling and means necessary to develop a line of bicycle specific hardware seemed like a great idea, but wholly unrealistic, and we parted ways with Joe last year with a handshake and a “good luck, but I’ll believe it when I see it”. Low and behold, Joe’s done exactly what he set out to do, and had the initial line on display at not only this show, but this past NAHBS in Austin.

Apparently Sean has already taken delivery of a set, and according to him, it’s as good as anything he’s seen in his years in the business.

It’s not the lugs or paint jobs or curved tubes that make a bike brilliant, though those are obviously a few components. The bottom line is access to quality, American made steel (that for me anyway), turned this year’s San Diego ho-down on its ear.

Finally, at the end of an otherwise generally sleepy show, we packed our goods up and turned the ship around to come home.

While I will miss my friends, new and old alike, and being surrounded by hand crafted wonderment of every shade.. and of course will long for the rides though expansive valleys and rolling fields of green, I’d be lying if I said the idea of spending even another minutes within the confines of our rolling human gas chamber appealed to me in the least.

9 Responses to “So much time, so little memory.”