However, by my math, Jesus is returning on his Great Space Coaster in a mere thirteen days, which means (assuming I’m not confusing my religious doctrines here) that once we are whisked off to eternity to meet up with our individual seventy-seven virgins (all of those people in the above photo will surely be there), Mondays will be a thing of the past.
At that point all we will have to worry about is which pair of incredibly comfy slippers we should put on, and whether to go play with the box full of kittens, or ride water slides all day. (Arybody got they own view of Heaven.)
Like this, for example;

If anyone was wondering what the process of constructing a Wizard Staff® was like, it’s like this.
Until that time comes however, we all have real world agenda to maintain, one of mine being to post things on a website that may or may not have anything to do with the oft-mentioned ‘bicycle culture‘.
Today I will kick it off with the question of if you like art that doesn’t suck like I like art that doesn’t suck?
If so, then might I direct you to some Antony Micallef? 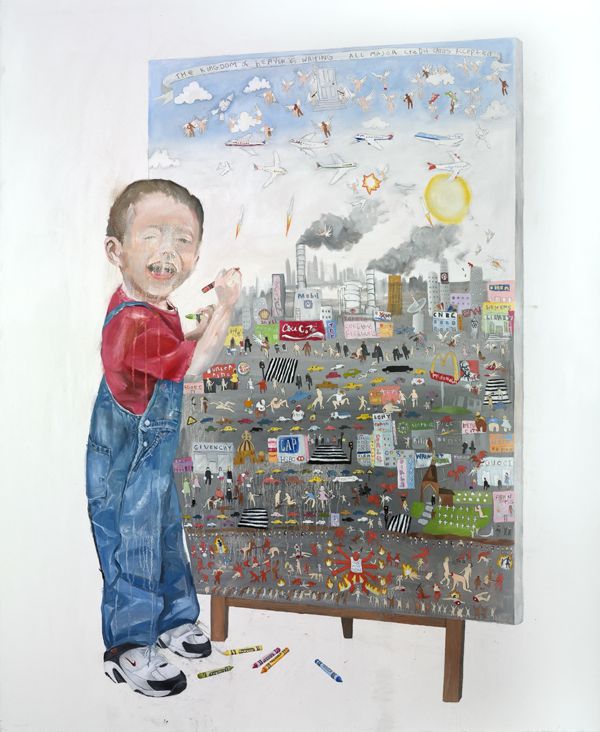 That’s the business right there.
In perusing my inbox recently, it occurred to me that I was in pretty desperate need to get rid of a few correspondences. Now that we’ve gotten a bite out of some art, let’s check in with some of the Black Market community.
Way back in February, Eric got in touch with a bit of jackassery that is every bit as pertinent today as it was then;
“This isn’t bike related but I know how much you like random shit and Budweiser.
A few pictures from a Memorial Polar Bear Dip near my hometown.
Comments below but I’m sure you’ll figure out the context based on the pictures.
Barbie has flotation devices and then she put on a life preserver. She BLEW the fireman out of his boots;

Wrap yourself in a warm BUDWEISER;

Not too many black people in that area but if that’s how big they are when it is cold, white guys don’t stand a chance;

Nothing can be said about a fat white guy in a skirt and pantyhose. The guy on the right nailed his shins on the ice in the river;

Later,
Eric Penne”
Now that you’ve read the words and looked at the photos, you see why I’ve been sitting on his email this whole time.
Pure gold in the form of an electronic communiqué.
Another email I got in February was from Colin, and if slippers, kittens and water slides weren’t your idea of Heaven, then maybe a good dose of schadenfreude is;

Being as I have done nearly all of those things at least once, I derive nothing but pleasure at watching someone else take the fall repeatedly.
In another pile of huge randomness, Andy from Fyxomatosis (pictured here);

came through with a heads up concerning the forthcoming Fyxo cycling caps (see what I did there?), as well as a random array of visuals;
“New cap- It’s the sample and a shit photo – you know me, I like nice photos;

but do as you will. Any PR is good PR right? Even that night with the colombian tranny prostitutes.
I’ve got my first kit as well as the winter jacket also this year.
Inspiration is louison bobet. Won PR 5 times and flanders 6. A sharp dresser to boot.
some other random shit attached and a link to day 4 of my bike holiday.

(Note that Andy is still wearing the same sweater as he was back in his training wheels, moose knuckle days.)

wish I could take credit for the last photo.”
To those of you in the audience who might happen to be good, wholesome, and God fearing Americans (see; easily offended by a human body unless it’s that of Osoma Bin Laden) I apologize for that final image.
Then again, if you are the aforementioned, you aren’t reading this anyway so my apology is landing on no ears.
In news of bike stuff, Devlin darkened my door last last week, and together we adjourned to the woods where we found our happy places;

That look on Devlin’s face is one he’s been practicing for when young men finally come knocking on his door looking for his daughter. I call it the ‘I trust you but I don’t trust you and I will also kill you’ gaze.
Finally, Sarah sent me an image she found on Free Range Kids of what is likely the lamest skatepark in the entire galaxy;

It’s like ‘Signhenge’ but more finger-waggy.
But if we’re going to make it on the Jesus spaceship, finger waggy is apparently going to have to be the approach to life we’ll have to adopt.
At least for the next thirteen days.

4 Responses to “Mondays are the kind of party I don’t want to attend.”