I mean, here I was planning on being little more than a puff of smoke today, and then life and logic and science came along and made a fool out of me.

Of course this means that I had absolutely nothing planned for today’s post, because aside from spending what I thought was my last day on earth and what I know was the last penny to my name on a swimming pool filled with strawberry Jello®, I wasn’t putting a whole lot of attention towards what I do here for ‘work’.
Now here we are on Monday, as near as I can tell no one was whisked away to the great beyond, and Harold Camping, along with his several thousand totally broke followers are still here among us.
To that end, I was looking for a follow up article to an NPR piece I read abut folks who had given away all of their everything to help spread the word and so far all I’ve found was this.
At six pm on the nose I happened to be speaking on the phone with one Billy ‘Souphorse’ Sinkford, and we were discussing aspects of faith. I mentioned that I am all for the stuff, as it is a quality that helps people heal themselves of terminal illnesses, or simply get through deep and dark periods in their lives. It’s like an unflinching spiritual trust.
Though Blind faith in general, and certainly when existing on a mass level, can be a profoundly scary thing.
In light of all of the events of last week, I suppose it was just a matter of time before something like the following image came along;

Randy Savage died to save all life on earth, and my faith in mankind’s ability to maintain a sense of humor was restored.
That’s something Harold Camping maybe never took into consideration.
And speaking of blind faith, how about that Lance Armstrong?
For any readers who might not be in the know, the proverbial shit has pretty much hit the fan, first with Tyler Hamilton’s interview on 60 minutes (which was fairly well excruciating to watch), then George Hincapie’s testimony, and now Frankie Andreau’s support of them both. The noose is tightening.
Some say his goose is cooked, while others use far more colorful wordage.
I’d like to be a fly on the walls of all of his legions of defenders this week.
Anyway, for my part, I too felt the need to absolve my sins, and with the use of the Twitter, came clean about my own history of drug use, noting that they enhanced my popsicle, grilled cheese sandwich, smoked almond, ice cream, orange juice and potato chip eating performance by 42%. It was a weight I needed to get off my chest, and for the first time in years, I slept a sleep of the innocent.
Drugs and drama aside, in news of my own engagement with speed cycling, and End Times®, in preparation for the big day, I took my new steed out on Thursday and rode it exactly 66.66 miles; 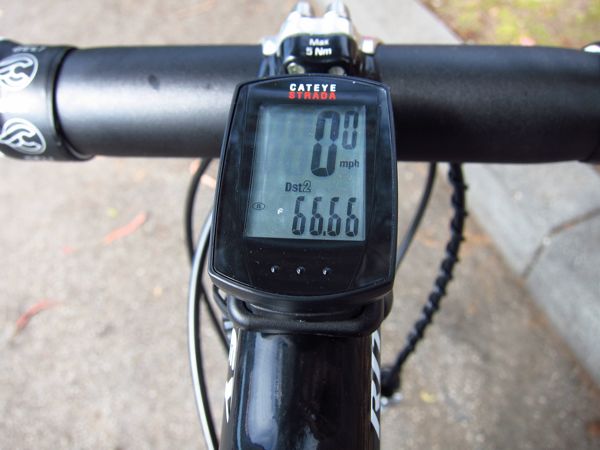 For the average person this might not have been such a feat. As a matter of fact, 63 of those miles were really nothing to write home about but the final three(point)sixty-six I felt as if Lemmy himself had reached down from the heavens and beat me up with my own legs. Then, as if that weren’t enough, I came to the conclusion that both of my nipples had actually rubbed raw to the point of bleeding.
Could it be that the excitement of this new bicycle was enough to keep my nipples erect and rubbing continuously against the inside of my jersey? At this point, I can only say possibly.
I’m not totally sure that Rapha doesn’t sell some kind of salve for this issue;

If they do, and any of the Raphaites are listening, I need your help.
For now I am using the Wendy O’Williams tactic of keeping them hidden with electrical tape and it’s working like a champ.
It even allowed me to adventure out into the dirt with Sky for a piece on Saturday. We both figured that since our time on a peaceful planet was limited, why not go out and spend some time in the woods with dirt bicycle machines and backpacks full of cans;

Actually, acknowledging that one’s time here is generally limited, Rapture or not, engaging in this sort of activity is a pretty good daily practice anyhow.
But back to drugs, and their irresponsible use, Brij sent me this bit last week, which leaves us both feeling fairly old. By the way, if the church lady sits next to you at work, you might want to turn your volume down a notch;
“Hi Stevil,
So you’re an arbiter of taste and what’s up with the crazy kids. Thought I’d send along the latest and greatest for your consideration: Earl Sweatshirt. Of course you might already be way up on this stuff. Wish I could say I completely got it, I have a few ideas, but thought you might be interested nonetheless. OFWGKTA–Odd Future Wolf Gang Kill Them All Don’t Give a Fuck Loiter Squad in full–the latest thing in hip-hop. Definitely raw–youngsters who are blowing out their elders. They’re into drugs, horror movies, and the usual topics.

And an article from the forthcoming New Yorker.
Best,
Brij”
Well, I can say at least they’re not out in the streets causing trouble..
Dipping into the mail bag, Ted got ahold of me with some stimulation for my idle brain;
“Stevil,
I don’t understand what compels a person to do this, let alone film it.

Ted”
What compels a person to do this let alone film it? I would guess just because they can, and for that I have to offer thanks. I might be low on blood sugar, but that made my eyeballs cry with laughtears.
At least as far as the blood sugar thing goes, luckily I can probably take care of that with a feast of a surplus of at least 25,000 gallons of strawberry Jello®.

14 Responses to “Talk about getting caught with your pants down.”