So to recap, I spent last weekend and some change in Portland, Oregon for the Oregon Manifest custom utility bike thrown down, and ‘How Portland Can You Be?’ event, which I lost profoundly due to the fact that I have hairy arms and open wounds on at least one of them;

But before I get into any of that, I need to make an announcement regarding the AHTBM Smokey and The Bandit replica jerseys.

I’m aware of the fact that if you had conceived a child when this project was first announced, you would have an actual baby human being right now.
That reality isn’t lost on me.

In fact, I sent a mass email out on Tuesday to everyone who placed an order notifying them that the end was in sight. If by chance you didn’t get said email, the long and the short of it is this;

Mid-October is when they should begin to flow out of the factory and into people’s hands.
I realize that the turn around on these has been excruciatingly slow, but when you take into consideration that aside from the standard wait when doing a custom wool garment, we had to make custom patterns for every aspect and size, plus an adjustment of the embroidery for each size as well, coupled with where we fell into the production queue to begin with. This has been no small feat and I genuinely appreciate everyone’s patience.

As for the secret spy shot, the thing is just about the sickest garment I’ve ever seen;

Anyhoo, back to the matters at hand. Suffice it to say, and as was expressed in an email exchange with Slate on Tuesday morning regarding the Manifest event, Portland was as Portland as Portland has ever been.
When we last parted ways, I was headed back downtown to the Pacific Northwest School of Art where the bikes were on display.
I made two passes through the building to take photos but there were so many people and it was so hot, it was like a combination between free hotdog day at the mall and a sweat lodge.

At one point I even think I had a vision where I was an eagle, bravely soaring though the clouds. Before long I found myself back on earth, sweating balls and surrounded by dorks;

Finally, I got back outside where I was able to breathe, and we sat on the stoop of the mobile bike shop, where I drank in some beer and then drank in some of this bad assness;

Hundreds of people saw that jacket that night and probably ten knew what it was.

Eventually after tiring of heckling passer-byers, Otis showed up;

and I recognized him immediately from this shot which was on the site one to five years ago;

I believe he said at the time he’d just lost his job, but simultaneously gotten a new bike which put a smile on his face which as of last Saturday hadn’t faded.

From this point the rolling mess of us crossed paths with Mark and Kim (or maybe it was Heather) from West End Bikes, which is one of the prettiest shops I’ve ever been in. It’s the kind of place that looks like what a Hollywood set dresser would think a bike shop should look like.

Plus they have these stands made by a local craftsmen whose name I’ve forgotten, *Nix that.* but which are the coolest things ever;

It also gave me the opportunity to take a solid gander at Cheever’s new Dirtbomb;

Now please understand, the lot of us were a bit heated when we darkened the pristine shop’s door, but Mark had invited us and said that he had two kegs of some fancy pants Rogue ale or another, so after taking hits off of that for a couple hours, tiny bike derbies and dog piles became a common activity.

As a matter of fact, I received an email from one of the wrenches the following day;
“Hey Stevil,
Good to know you were able to stop by West End Bikes when you were in town.
Mark said you guys had a good time.
thanks for the little present you left in the shop

p.s. I was the one straightening training wheels and mopping the beer soaked floors.”

I suppose if I could recall correctly, I’d say the evening looked something like this; 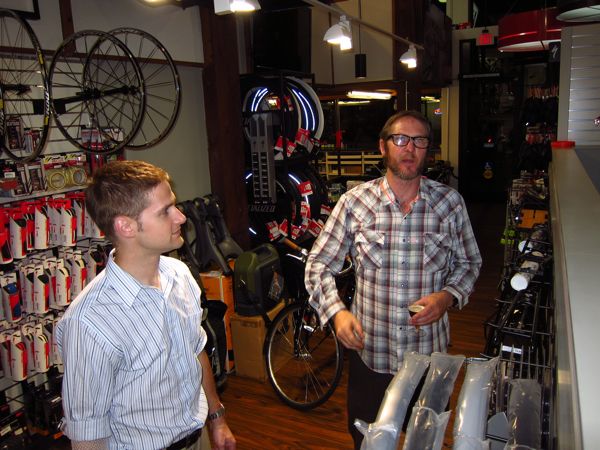 All in all it was a great evening and I want to once again thank Mark and Heather (or possibly Kim) for allowing us to destroy what they so clearly have worked tirelessly to achieve.

From there we went to another bar, but not before Schreiner and I got into a helmet punching war, I derbied us both into a bush and apparently attempted to convince a group of people that one time in a jail yard fight I bit a man’s balls off.

Or maybe that was the next night.

The last thing I recall thinking on this night however, was that I wanted some chicken wings and that this arch was awfully pretty;

Waking up three hours later with a text from California DoomStepiano asking if I was riding in the big ‘ride an unwieldy bike for 50 miles’ ride, (to which the answer was ‘hell no’), I was at it again with a breakfast plan and some goofing off with Dave and Carrie Evil. We eventually had to make it back to the King Precision Components World Headquarters for the awards ceremony, and more hijinkery, of which I was dishing out in spades.

Of course on our way there, we had to stop by Leisure, where we drank beers, wrote bad words on random crossword puzzles and drew cartoon penises on the bathroom chalkboards. Once we buttoned things up there, we moved on to a liquor store and then we were off to King until Dave said “let’s drink a beer on the bridge.”

So after a few, we were finally headed to King when Dave said “let’s go to Casa Diablo.”

He has a way about him, that Captain Dave does.

Standing outside, Dave was adhering an Evil sticker to the rain gutter when who should emerge but Johnny himself. Looking none too pleased with what he was witnessing, we immediately disarmed him with gifts and acolades and nicknames as retarded as his own.

So in we went for a freshie or two, and eventually I left the bar a few singles lighter and with a random array of biological matter distributed across the front of my shirt.

Anyway, we got to King and everybody was bananas for the first entrants to ride their bikes across the line, though we mostly stood in the wings and took in the sights and sounds of an event for the ages;

At one point over the weekend he said, “I was on your site a while ago. You posted a photo of a Soulside show and I was in the crowd.”
For those of you who might not remember, the slightly longer version can be found here.

Basically, I found a random video shot in the late 1980s. A short time later, I happened to find a photo that was taken at the same show and was able to stop the video at the exact moment that the flash went off. Going back and forth via email, I come to find sure enough, there’s Matt up front;

Black and white still by Nicholas McIntosh.
Continuing on…

This is Jocelyn SyCip, and she was the puppet master behind this whole debacle, pulling it off with amazing grace.
Then there were those on the other side of the debacle;

I guess you might be wondering who won the competition, and that would be none other than Tony Pereira, shown here on the only bike I ever got a close up look at a couple nights previous;

From this point, the weekend dissolved into more carousing, video games, hangovers, strip clubs, football games, watching Road Worlds, Cav’s victory, and the closest third and fourth between Greipel and Cancellara ever recorded;

Up there in the North Bay, and in conjunction with Levi’s GranFondo ride the following day, there’s a bunch of frame builders who will be cage fighting;

Then down in the Bay Area on the same night, there will be a group of sensitive artists sitting around talking about their feelings;

I’m not saying which one you should attend if you happen to be in the neighborhood, but I am saying there promises to be a Pineapple Bob sighting at the latter, which as you might can figure is about as rare as seeing a caveman in Portland without hair on his arms.

12 Responses to “A tale about a place and some things, part two.”