Kicking things off today, I’d like to present what might possibly be the greatest gif file known to humankind;

Chuck Norris just got bettered.
Many thanks to The Bicycle Story for tracking that down.
Also, if you have sent an email to me at my stevil@allhailtheblackmarket.com address in the last 48 hours or so, please note that due to some behind the scenes maintenance, I seem to have not gotten any emails at that address. This also includes any orders that may have come through.
If you have placed an order, please let me know via captainkinevil@gmail.com and I’ll get things sorted out as quickly as I can.
Thank you for your time and consideration on this matter.
Having gotten that out of the way, let’s get on to some bike stuff.
One message that made its way into my inbox was the following transmission from Colorado;
“Subject: SSSRWC
Because we can, that’s why.
6 riding stages and one stage of drinking/feats of resolve/intestinal fortitude. Winner gets a custom frame. And possibly a tattoo. Or a foot rub. Or their liver’s weight in Jagermeister. Or just a nice slap and tickle.

Decisions, decisions. What we know for sure is that there will be a SSSRWC jersey commemorating the exploits of the winner, cleverly conceived in brilliant pastel hues with TBD bad-ass doses of black by the Europhile (in today’s missive, a compliment) super-geniuses at Panache Cyclewear.
Loser gets the winner’s pubes glued to their face for the entirety of Stage 7’s post-event debauchery. Or something.
And if we go with plan A (humiliating and disgusting groinal-region hair glued on the face) for $50 the loser can opt-out of the facial pubing and the next guy up the line gets it. At which point he can opt out. And so on. That continues until the stack of money becomes too tempting and some perv leans in and takes on for the team, or until we move on up to the line to the actual winner on GC, who can skip the pubing AND keep the money.
Ladies prizes TBD. Jersey, bike, yadda-yadda-yadda, but possibly without the Brazilian.
Seriously. Screw the UCI. Soul-leeching, pleated-chino wearing, ass-licking, sycophant OCD stumblebunnies.
Acronyming on –
MM
Breck MF Epic”
I don’t know about you all, but I’ve done a lot worse for a lot fewer dollars.
Organizing the 2002 SSWC, eating fifty slices of American cheese in under a minute, as well as a patch of skin off of some guy’s hand all come to mind.
But I like the fact that anyone is willing to throw a monkey wrench such as this into the works, and I’m proud that some dirts from my beloved home state are doing just that.
In other news, Noel made contact with the words and some corresponding imagery;
“I share the irritation you feel towards that dude on that game show with the spikey frosted hair. Pretty much man who dyes his hair is suspect to me. Except for the Goth crowd. That I can somewhat understand.
Anyways, the photo on your site reminded me that I took a sequence of photos on a recent trip mountain biking in northern wisconsin with some buddies. One of which happens to be what must be your biggest fan. I present the many faces of Ken Barker.
1. Plain old Ken
2. Lumberjack Ken
3. Irritating Spikey hair lookalike Ken
4. Wolfman Ken; 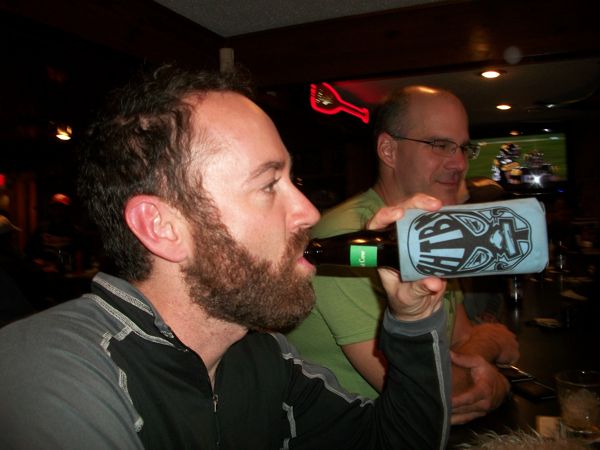 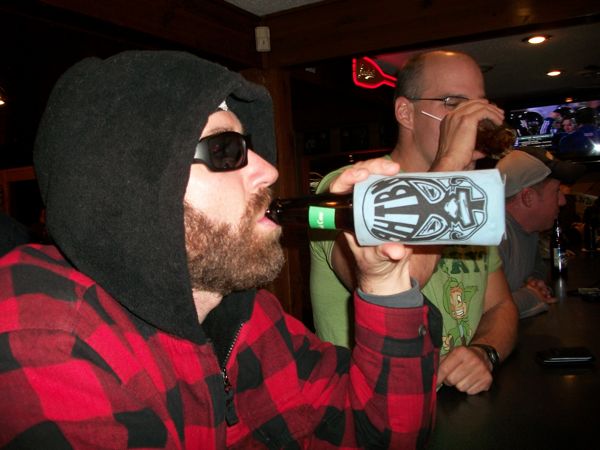 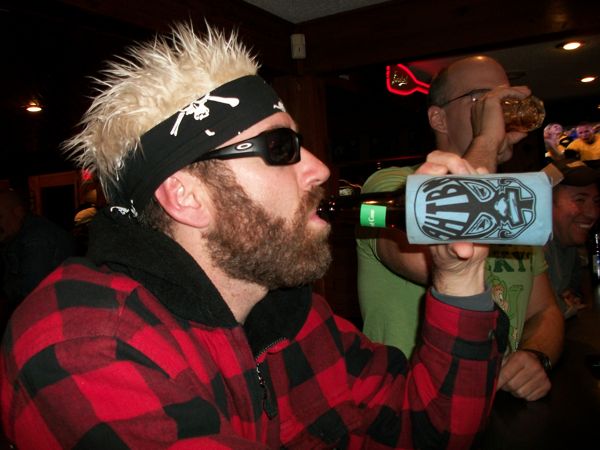 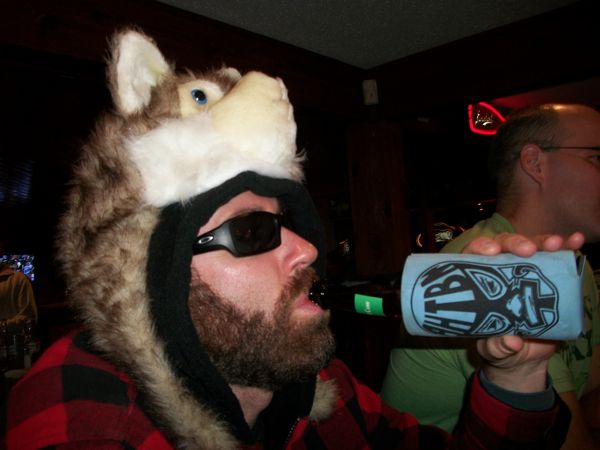 I don’t remember much of that night. I’m sure it was fun.
Noel”
If I had access to my own Wayback Machine®, I would have it take me there.
So around these parts, I have experienced a flurry of activity recently, the likes of which I haven’t in some time.
Amigo number one mentioned to me last week that Paul Components was having an open house that he figured we should attend. Liking this idea, I made my way to Sacramento, (that’s where Arnold Schwarzenegger used to live, and possibly knock-up house keepers). There I met up with Darin, Cary and Lola the pitbull, and spent some time on the sofa making sure the cans of beer didn’t escape.
The following day the lot of us converged on the Gold Country in celebration of the birthday of a local crusty crumudgeon known simply as ‘Og’, to partake of an off road mountain styled bicycle type of athletic pursuit, which kinda looked like this; 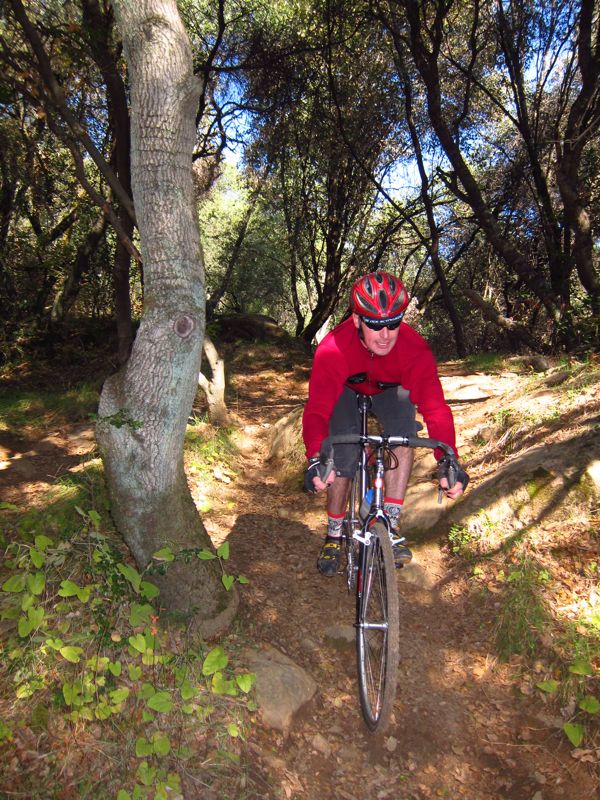 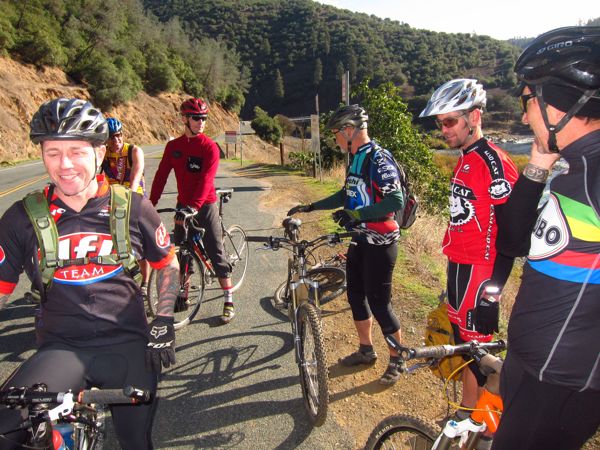 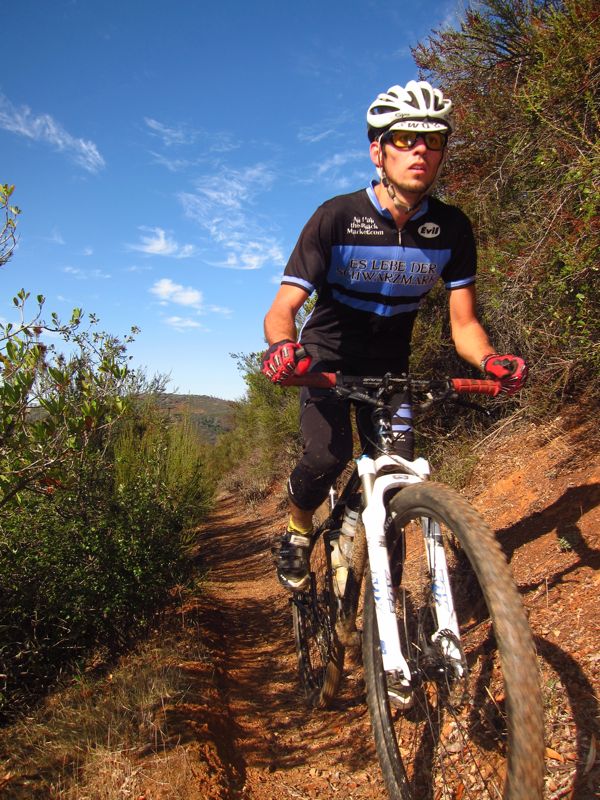 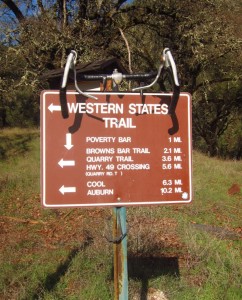 I was particularly excited by the idea of visiting the ‘Poverty Bar’ as that is typically the only kind of bar I frequent.
Carrying on, we saw an abundance of trails that even the locals had not ridden on before; 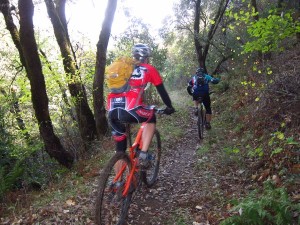 And some that they had. Here, Amigo number three is so bored, he’s pretending to be sleeping; 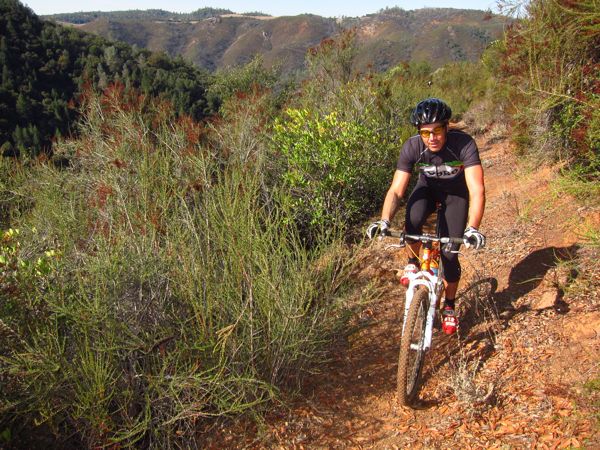 While Daren actually took a nap; 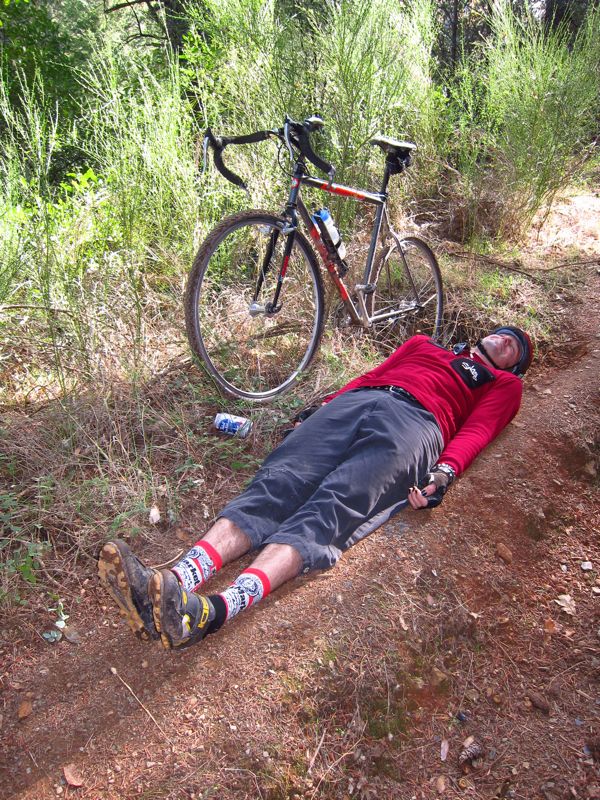 Finally, with no crashes or carnage to speak of, we concluded our journey with a trip under the bridge that Triple X surfed his car off of; 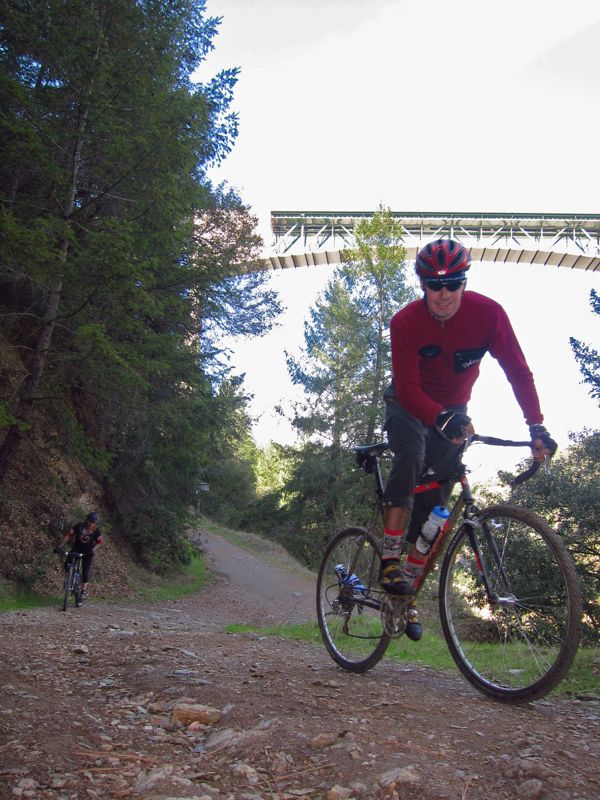 There was no time to look for pieces of the Corvette though, as we had to get on the road for Chico, and the world headquarters of Paul Components Manufacturing. Once we arrive, slapped a few hands and began making a mess of things, I poked around and took a few photos; 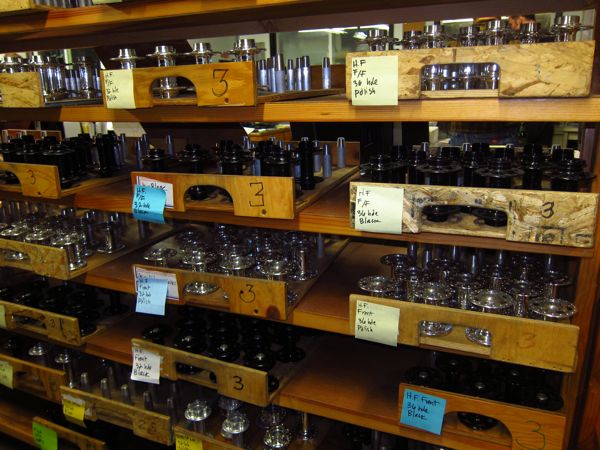 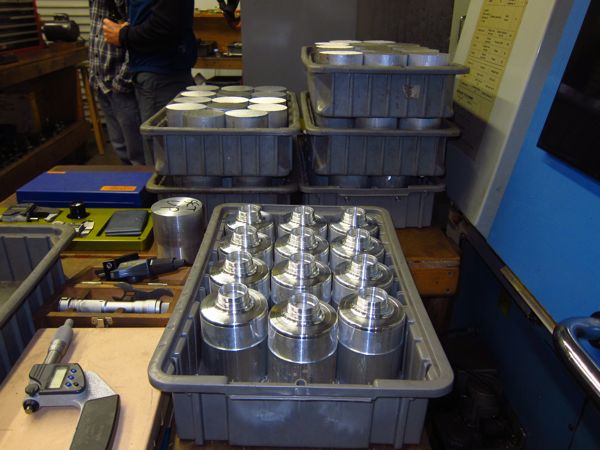 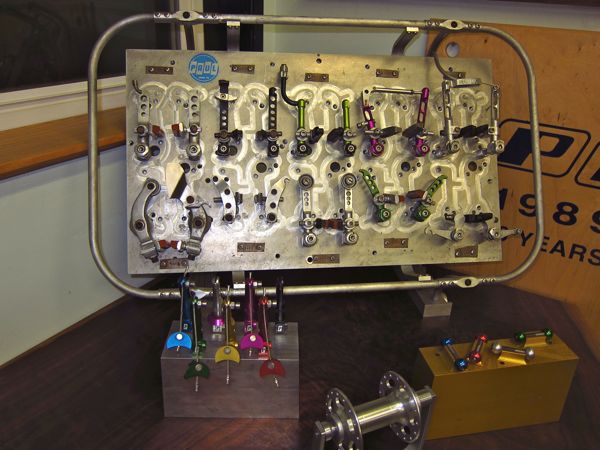 In addition to an array of fancy-pants CNC (Music Factory) machines, Paul has an array of classic battleships in his quiver as well; 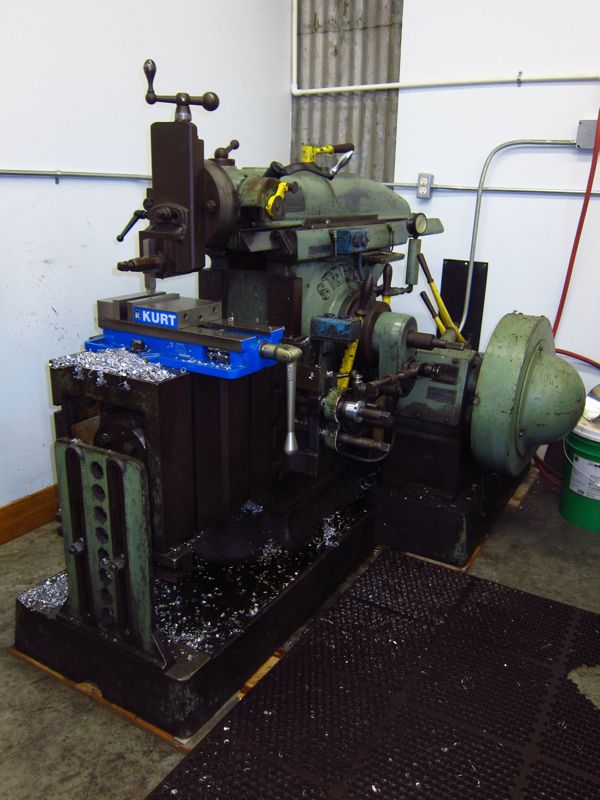 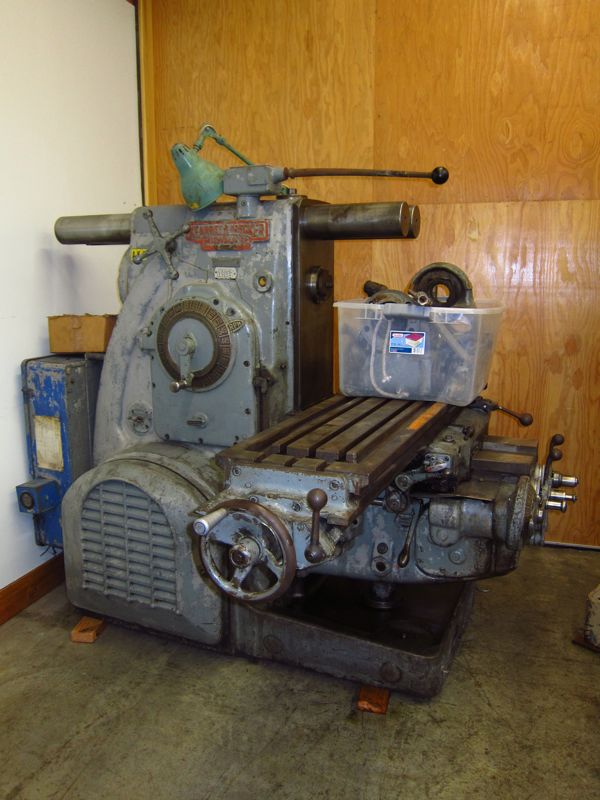 Old things that are gonna make new things, that any of us would give our proverbial left nuts for.
As you might can imagine, the shop is pristine, and extraordinarily well organized. To assist in said organization, I added a few of my own labels here and there; 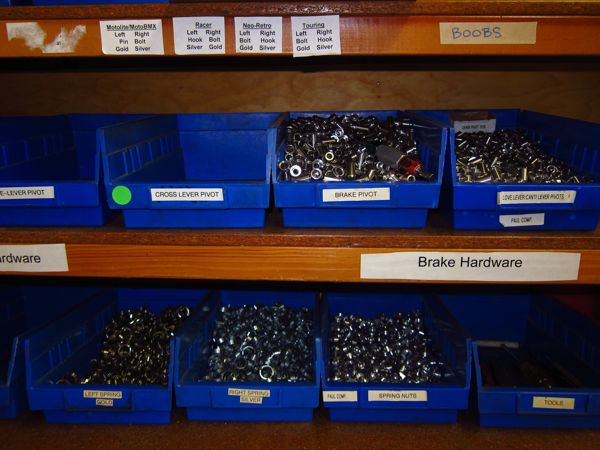 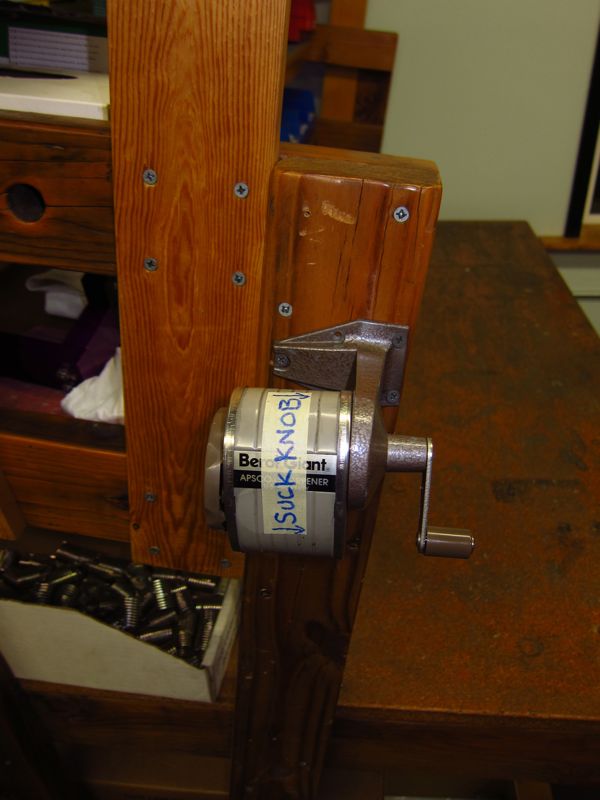 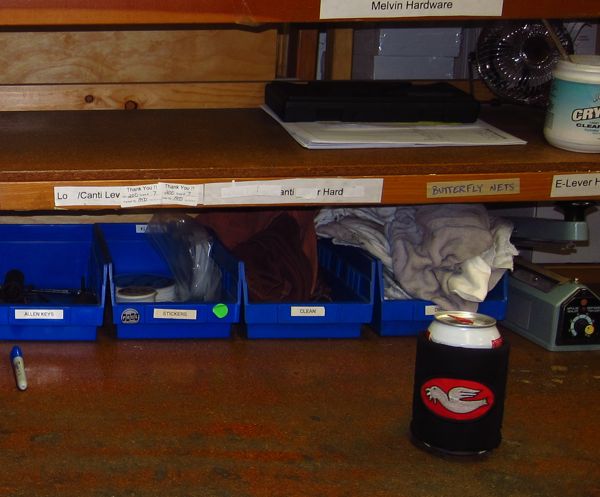 With all of these attacks on the infrastructure’s organization, Paul’s right and left henchwomen, Tamie and Kate decided to cut loose and triple cheers up Amigo number three; 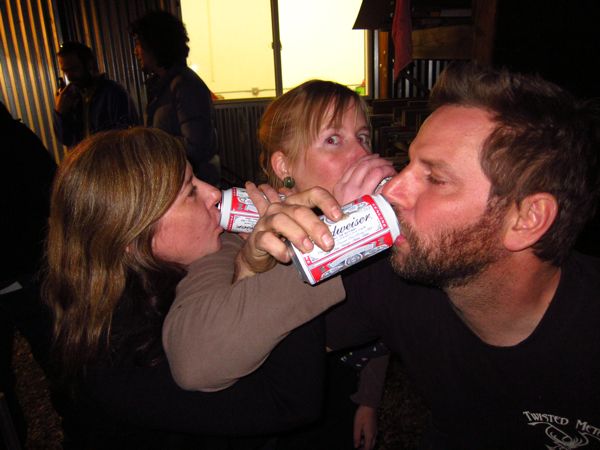 On this night, not a beer was spared.
Before we left, I took a photo that is remarkable in that without the encouragement (pestering/annoyance) of these three individuals, Paul would have not made his KISS one speed group, or maybe any of his other bad ass single speed parts, which at the risk of sounding overly dramatic, would have drastically changed the face of the mountain bike world; 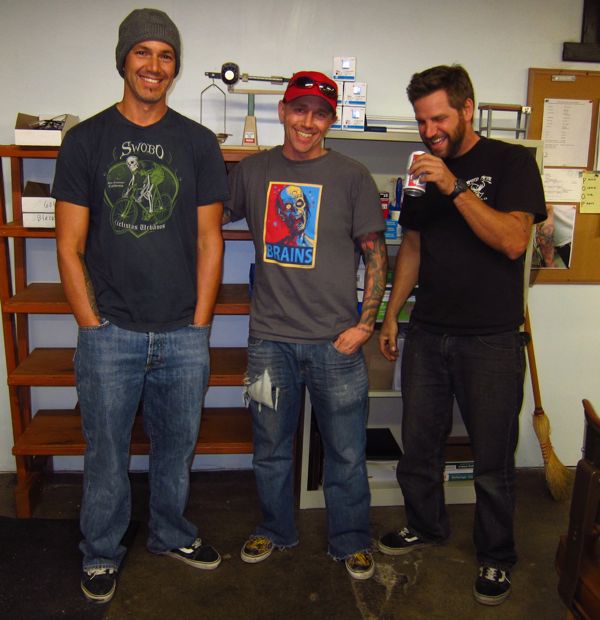 At the very least there would be considerably fewer orange jumpsuits involved in it, which according to some folks might not be such a bad thing.
At this point it was getting late, and was only Thursday. We had to beat feet, because there were things to do, sleep to sleep, more trouble to get into and it wasn’t even the weekend yet.
It is with that that I pinch today’s post off. Wednesday will have more weekend hijinkery, including swap meet action, more mail bag hopefully), and probably a couple of vaguely inappropriate puns. This is something you surely wouldn’t want to miss, unless of course you do.
Until next time.

8 Responses to “It’s like a Purple Haze®, except it’s made of cheap beer, dirt, vodka, and aluminum shavings.”