Alright, so let’s get to this.

This year’s SSCXWC was an all weekend affair with qualifiers, and parties, and festivities that kicked off on Friday. Fortunately I have amassed a fair collection of suggestive photos of the people behind this event and was granted the honor of being able to show up late and get into the men’s finals anyway. If I can’t excel in actual bike racing, I can excel in blackmailing the promoters to let me get away with breaking the rules.

So there I was sitting on the train, speeding northbound and looking at lots of crappy graffiti;

Once the train pulled into the San Francisco station, I grabbed my bike and headed to meet up with an array of dirtbags at The Mojo Bicycle Cafe;

I was there just a short while before I found myself inadvertently on the periphery of a conversation regarding bike parts, which I don’t think is physically possible for me to actually to care less about.

In response, the enigma known as Dan Cheever, (who was flirting with the idea of unleashing his drunken alter-ego Stan Beaver) and I broke out of there and did a little hot lap through some of Golden Gate Park’s trails, which then put us on a hunt for a liquor store. The hunt stopped short when we found a little Irish dive bar, and fell inside to warm up a couple stools;

While Dan/Stan maintained his drunken course and franticly paced the floor murmuring unintelligible nonsense about how there was no metal on the jukebox, I sat calmly and quietly with my beers, wrapped up snug as a bug in my Poler brand Hangover Sack®.

I’m reasonably sure the bartender thought we were homeless and/or crazy and if it wasn’t for the consistent flow of money from out of our wallets and onto the bar top, he would have kicked us out at hello.

Time was getting on, and since Cheever was without lights, we hurried back to Mojo, where we found the Hodala crew lingering and mingling. After another few slapped hands, Captain Sundt told us to pile into the Raleigh van where we were joined by none other than Ryan from Go Means Go;

The brakes were slammed upon repeatedly, throwing us around like dolls made of rags.

And in the short drive between the cafe and the house at which they were staying, I saw no fewer than half of the van’s occupant’s asses at least twice.
Safely arriving at our destination, we emerged into the darkness and unloaded our goods at the house. “There’s a keg downstairs!” was the last thing I heard before the world went a little cocked;

Some stuff happened there and conversations were had, though I couldn’t tell you what or how.

One thing I do remember is that Captain Sundt and I hatched a plan for what will inevitably be the most badass race ever in the history of races.

You know sometimes when you get drunk an you have an idea that sounds epic, but the next day you realize that it’s not epic at all, but instead completely asinine?
It was like that, but the next day, it was still awesome.

Anyway, by this point we were sufficiently lubed, and we had to get back downtown for a party/pixie bike race at The Sports Basement. We donned our gayest apparel and braved a soggy night to go to the place where there were more things to do and drink;

Festivities were well underway by the time we arrived, so we stashed our rain gear and re-entered the eye of the proverbial storm;

And then as the evening was coming to a close, this happened;

Ryan, Skinny Bee and I beat feet out of there to a favorite little watering hole for more nightcaps, which absolutely dwarfed the previously mentioned ‘cocked world’ at the Hodala house.
A wiser man would have raised the white flag and crawled into his refrigerator box, but alas, none of us are wiser men, and as we parted ways with Ryan no one was making much sense;

At this point Bee and I went to meet up with Kate, followed by a return to his house, where based on the disarray of his space the following morning, we had a no-holds-barred wrestling match.

I’m not ashamed to say that I have absolutely no recollection from about two o’clock in the morning on, and I suspect that it’s probably better that way.

Sometimes even the best of us get over served.

So I mention all of this to paint a picture of how absolutely, miserably horrible I felt upon waking up four hours later.

But I had a championship men’s race to partake in, and I wasn’t going to let a little thing like brain damage slow me down. Just when I thought I was going to succumb to my own poor choices, I was presented with my own Big Dave spoke card, which cleared away the fog and gave me renewed purpose;

Unfortunately due to my pre-spoke card sluggishness, I missed all but the very end of the women’s championship race and was a little lackadaisical with the picture taking. Luckily, ace photographer Steve Anderson took up an abundance of my slack and did a whole lot of what he does best;

If you would like to see his whole set, and I recommend you do, alls you gotta do is go here. Carson Blume also beautifully captured a bunch of the action which can be found here. Or if you prefer sound with your images, you can just watch this;

During the final moments of the women’s race- (for which I understand there were 100 entrants. Pretty bad ass unless your goal is to keep women out of cycling), I was attempting to figure out how to put on my shorts and which way my jersey went. Time was drawing near to the main event and I was feeling like taking a nap. Not exactly the fierceness one needs just before engaging in battle.

I stopped by the registration table to pick up my number which was especially reserved for me, and some ne’er-do-well had absconded with it.

Luckily, the promoters were looking out for me, and called the offender out on the line, replacing his number with something a little less awesome; 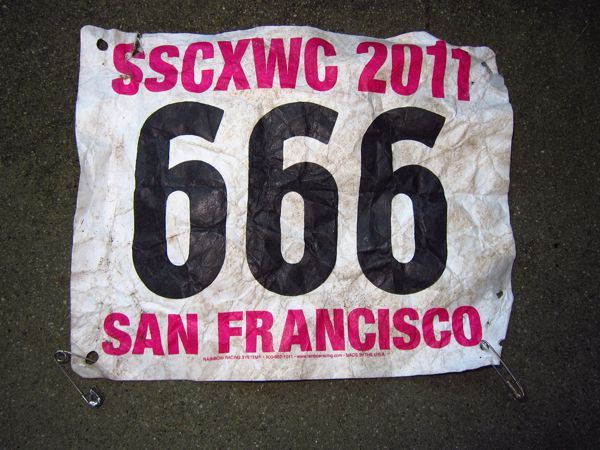 So the race started, and it was a cluster of bodies and mud and bikes and parts and I wanted nothing but to vomit and expel the demons from my body but I was determined to stay the course.
At this point you’ve seen all the images, and video that the internet has to offer, but thanks to Jenny Oh I have a few additional ones to present to you anyway;

It was an amazing course, and in the hour I ‘raced’, I completed four laps. I assumed the fast guys were doing ten or twelve minute laps, where I was pulling solid fifteens. At the end of the race I felt elated, but also like a weight had been lifted off of my shoulders with my acknowledgment that in reality, I am an absolutely terrible bike racer.

I’m not built for this kind of event. I have to ride for at least forty five minutes before I can get my legs. These spazzes who can rocket off the line and go bananas for an hour are the kind of people who I bet were annoying children.

Secondly, for those who took exception to the beer spitting which was discussed on Friday, you would have hated this race, because there was a lot of it, and no one minded;

That is with the possible exception of one woman in particular. At one of the billion heckle spots on the course, I came though trudging and broken and out of the corner of my eye I see a full cup of beer get lobbed. However it was lobed with such fervor that the entire contents of the cup soared over my head in a glistening amber arch and nailed a lady in a purple coat.

But like I said, if you don’t want to get splashed with beer, stand somewhere else.

Photos courtesy of Skotty Pawz.
Remember, “ever since you’ve been riding single speeds, your life has been on a path of blablabla.”

We closed the night off with a trip to the bar where we hung out and high fived for a little while before slinking off into the night.

My clothes are now clean, my bike is washed and I have survived yet another debacle in spite of my every attempt not to.

I would like extend my most sincere thanks to all of the people who worked tirelessly to pull this fiasco off. I know it wasn’t easy, despite the fact that they made it look that way. The music that was being played during the race was even awesome. Fugazi and JSBX? Hell hath frozen over.

I didn’t want to like it, but in the end, I couldn’t help myself. It was just that good.
The critic has been quelled.

Thank you and goodnight;

21 Responses to “Ok, now… What the hell just happened?”