While wearing some denim schpants, apparently.

Let’s get right down to business, shall we? If you were to ask anyone who knows me what the one thing I really love is, a majority of them would say cute stuff.
Of course a couple would say snorting yards of cocaine off of the backs of moderately priced prostitutes, but by and large, the answer would be cute stuff.
On occasion I might portray myself as a rough-and-tumble individual, but even the most emotionally hardened person has their Kryptonite. Unfortunately for me, Little Brumble found mine;

‘Get the hell out of here’, I say. That’s so I cute I refuse to believe it is real.
Some other individuals that I’d guess were cut from the same cloth, but who would probably gut me from tip to toe rather than look at me are my new friends from The Whore Church. Their site’s not family friendly, or safe for work, or terribly politically correct, (then again, the site is called ‘The Whore Church‘) and it sometimes takes forever to load but they love cats and have occasional images like this;

… Which is awesome. Anyway, don’t say you weren’t warned.
In other parts of the world, Ondine keeps me abreast of other things of an equally grand sort of nature.
While I thought it was clever to change my last name to ‘Pornbong’, I’ve been trumped by a fellow who legally changed his name to Beezow Doo-Doo Zopittybop-Bop-Bop.
In this day and age, it truly is impossible to be an innovator.
Because at its core, AHTBM is a bicycle and bicycle parts related website, I will now broach that subject with the following. As I’m in the process of building up a new single speeded and twenty-ninering style of mountain bicycle made by the capable hands at Ventana, I’ve had to scrape together parts by any means necessary, including, but not exclusive to bartering, begging, borrowing and stealing. One item that I’ve used on my single speed style of mountain bicycles since their release is the Surly Torsion Bar made by NITTO.
What initially attracted me to these is that I was never able to find a flat bar as wide as most riser bars that were on the market, but with the same degree of sweep. Secondly, no matter how little I care about anything, I absolutely refuse to put bar ends on riser bars, and any one speeder worth their salt knows that bar ends are a key component for a bike of this nature. I would also like to note that I didn’t pick that bit of information up on the internet, but rather through fifteen years of my own practical experience and thus is my own opinion.
Strange for someone who maintains a web log, I know.
Thankfully Surly came through and laid a pair on me, shipping it with style;

Furthermore, for the price of a dinner, and my unfaltering adoration, Yafro came through with a frankenfork constructed with all manner of bits and pieces of whatever was available on his work bench;

Whether or not the fork’s internals are comprised primarily of hotdogs has yet to be confirmed.
Speaking of Yafro, while in the company of him and two ladies who I have yet to kick out of cycling, we recently suffered through yet another dismal winter’s day; 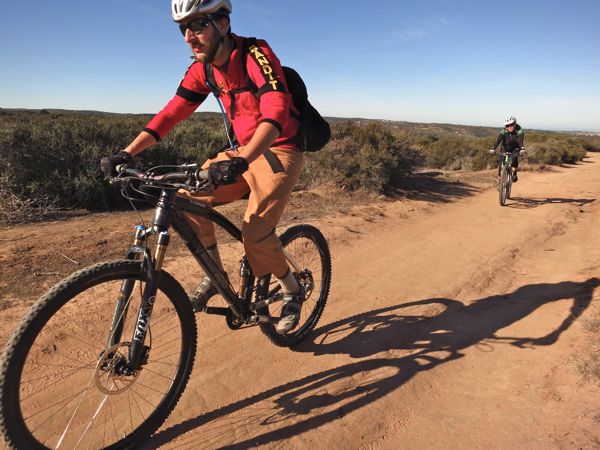 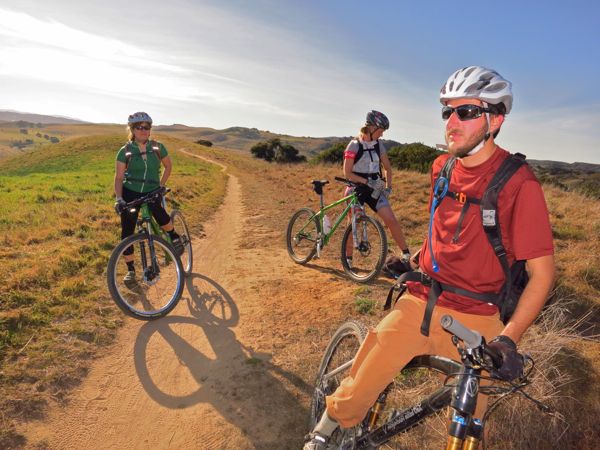 It was horrible.
And it was just a mere forty eight hours later when I once again was found twentey-ninering around the woods when I snapped this photo;

I don’t always ride, but when I do, I wear bellbottoms.
Anyway, as I was wheeling about in the woods feeling footloose and fancy free, I ran through a pile of particularly sloppy and wet dog feces which then splattered up my left leg. My happiness when into deficit, and I used the last of my water and patience to wash the offending substance from my front tire.
I then began ruminating on those who leave bags of crap on the side of the trail. “Hmm” I thought. “I don’t like that either, but it beats what I am contending with currently.” Then only minutes later, as if Dog had mistakenly zapped me with a bolt of misdirected bad karma and needed to make up for it, there on the trail in front of me lay a brand new twenty ninering tube.
Here we have definitive proof that both bad and then good things sometimes happen simultaneously to bad people.
Moving on… Thanks to the lovely and talented Katie, I’ve been notified that just good things are in store for good people here in my backyard this coming Thursday evening with a fund raiser for Project Bike Trip;
“Hey Stevil,
Hope you can join Project Bike Trip for a beverage or two at Santa Cruz Mountain Brewing for “Thank You Thursday” on Thursday, January 12th (This Thursday!);

Painting credit to Taliah Lempert.
Beverages are being poured all day and night, so come for a little while or a long while! Please pass flyer along to all your beer drinking friends.
Thanks!
Katie”
I don’t have anything but beer drinking friends.
Secondly, you’re still not familiar with Project Bike Trip you say?
Then allow me to fill you in… Or rather, allow the magic of Vimeo to fill you in;

Teaching high school kids how to work on bicycles and the importance of them in one’s day to day existence?
I’ll drink to that.
Now that’s we’ve touched on hard goods and kids, we will broach the realm of clothing, which all sounds morally questionable.
Sheppard Jones is a bespectacled individual who resides in Kansas City. Of this I am almost sure, unless I’m thinking of someone else, in which case, that can be scratched. One thing of which I am sure is that he sent me the following email;
“Stevil,
This is what I was up to at interbike.
These jerseys will be in the Spring 2012 Sugoi Collection.

Dealers will be able to order in the catalog in January.
This should be on the shelves, summer 2012.
The drawing is a sublimated panel sewn into a dyed white or black fabric.

I’m pretty happy with it, look what they left on the shorts, the EV, wasn’t in the final final illustrator file I sent.
I’m not saying anything.
Shep”
EVIL has a funny way of worming into the least likely of places.
It’s with that, that we arrive at the conclusion of today’s post.
Please feel free to insert clever reference to stepping off a cliff, denim schpants or both, here.

8 Responses to “Stepping off into the abyss that is Wednesday.”