When last we met, I was describing the train wreck that was my most recent trip to Minneapolis West, so as to attend the celebration for Velo Cult PDX being 20% finished.

To that end, I shudder to think how we will bring the shop in upon reaching 100% completion. 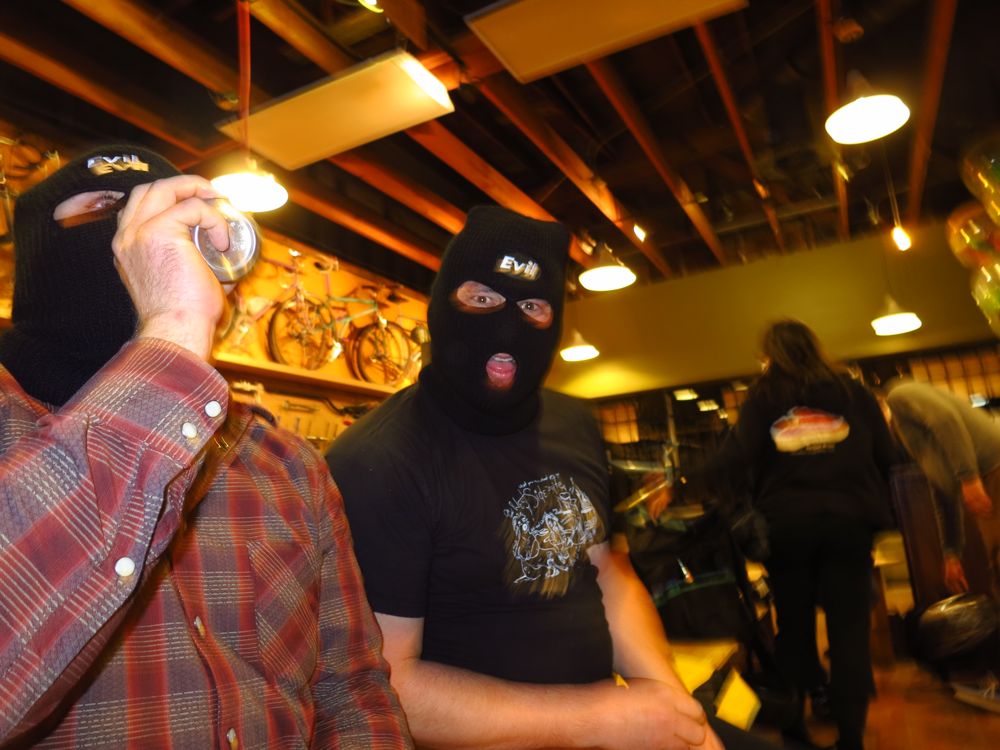 Waking up the following morning, I was bright eyed (one of them was, anyway) and marginally bushy tailed. I met up with a few of my compatriots for a delicious breakfast at The Miss Delta where we licked our wounds and attempted to figure out what kind of bomb was dropped on us the previous evening. A portion of the day was spent in a post-breakfast coma, and exchanging texts regarding what was next with Miss Amanda from 21st Avenue Bicycles. Nearing closing time, Cheever and I made our way to the shop where the previously mentioned mavin of mechanics set us up with a couple of transitionary refreshments; 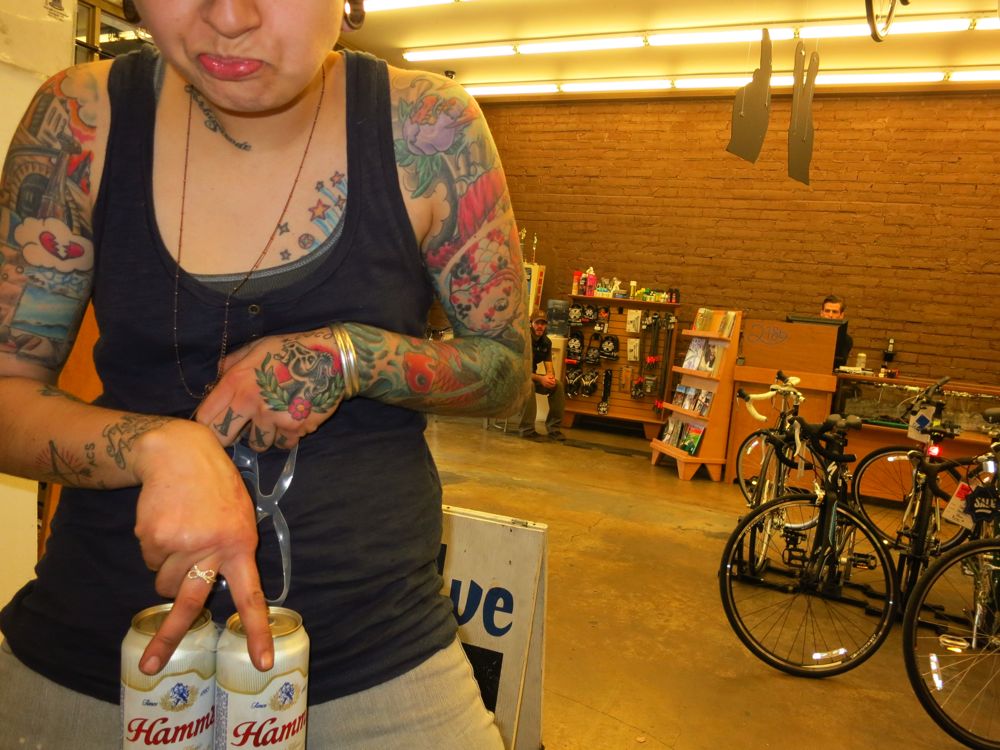 Immediately Cheever invented a new way to imbibe, which I took a photo of Amanda taking a photo of, thereby proving that even in our altered state, a pinch of postmodernism was not out of reach; 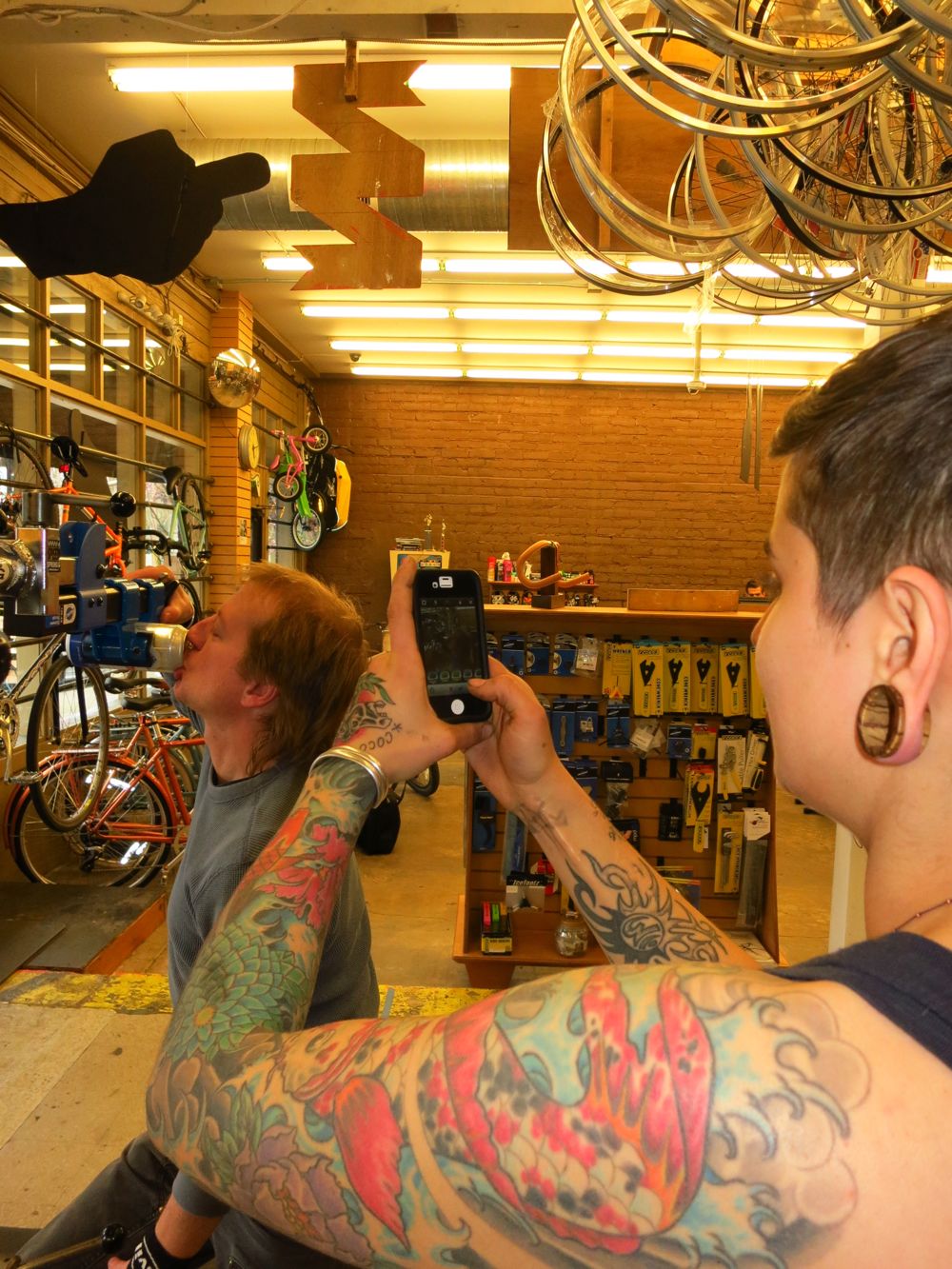 It was midway through this can when I realized the exact moment I turned the corner from cool buzz, to plain old drunk. I knew that at this stage, an evening filled with hecticness was an inevitability. We shot down the street to a diveish bar called Joe’s Cellar, where we opened a can of whoop ass that made the previous evening’s antics seem positively church social-esque in comparison; 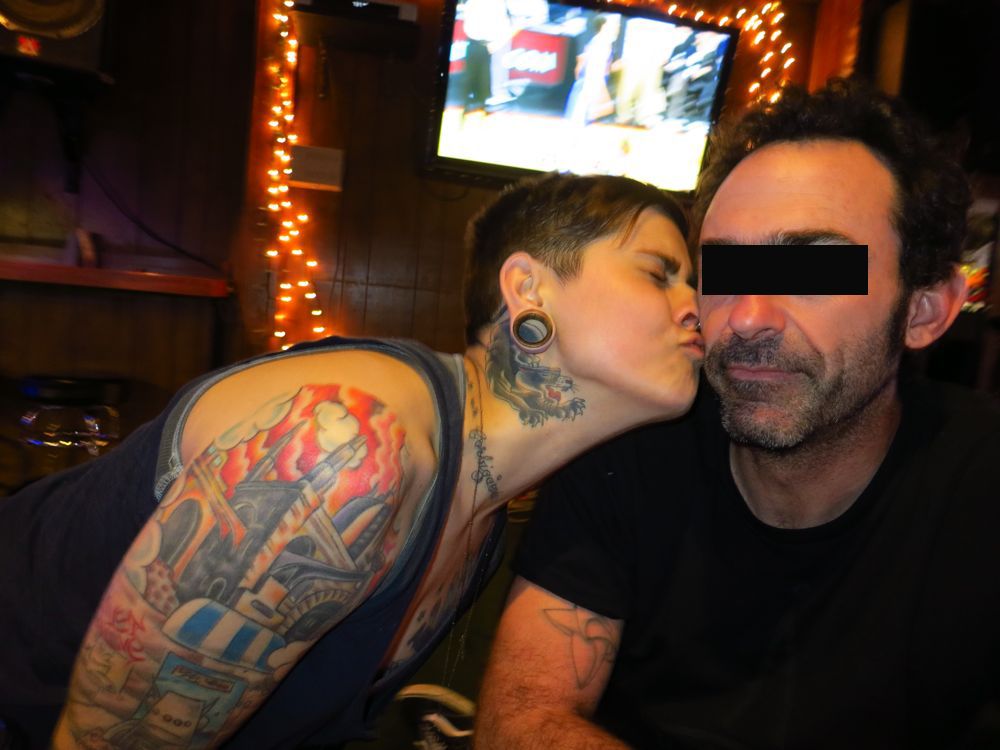 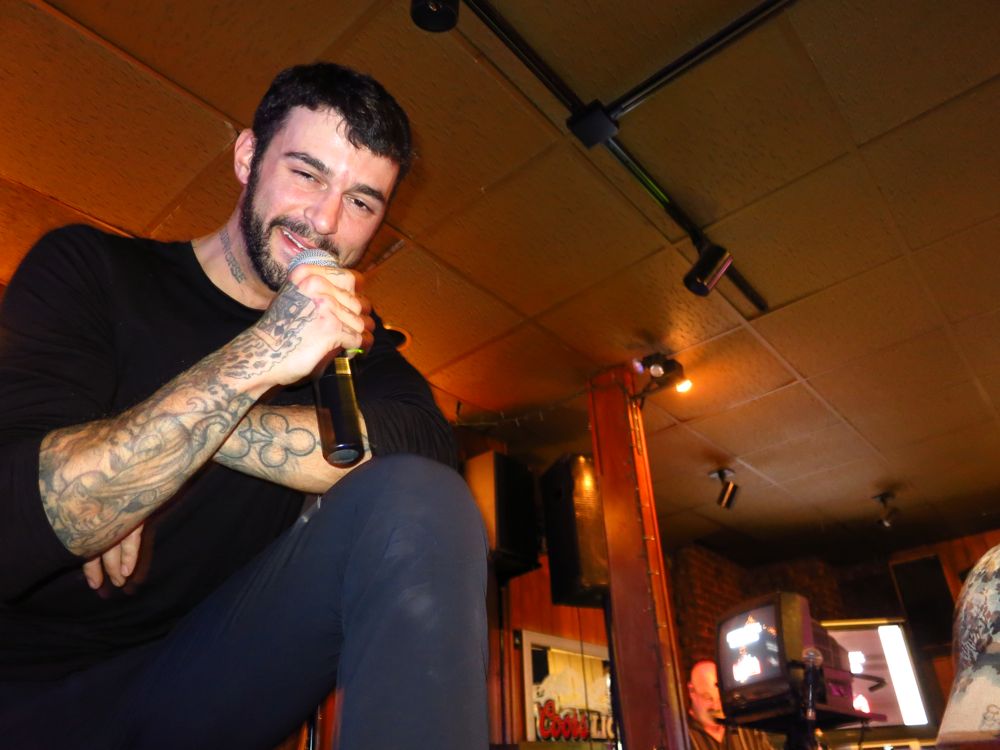 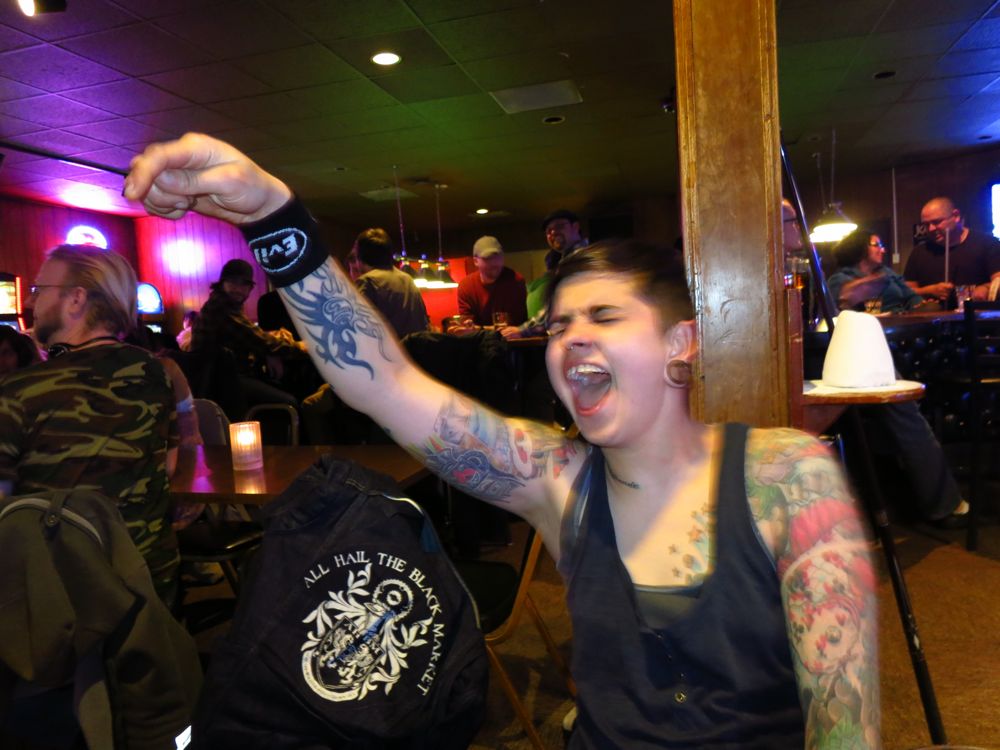 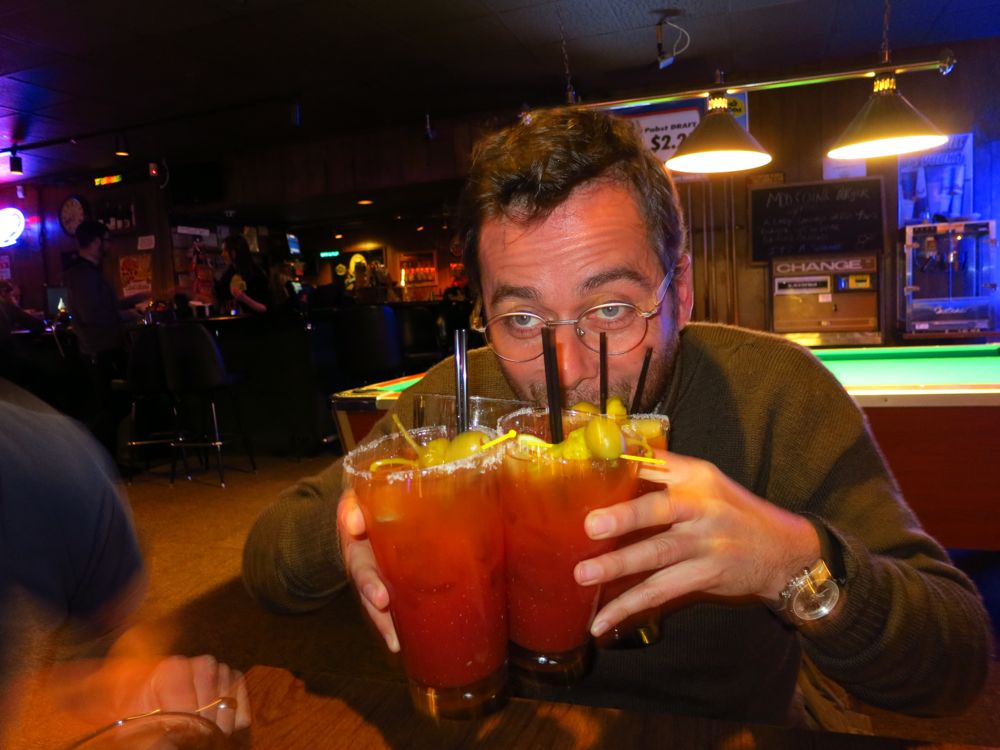 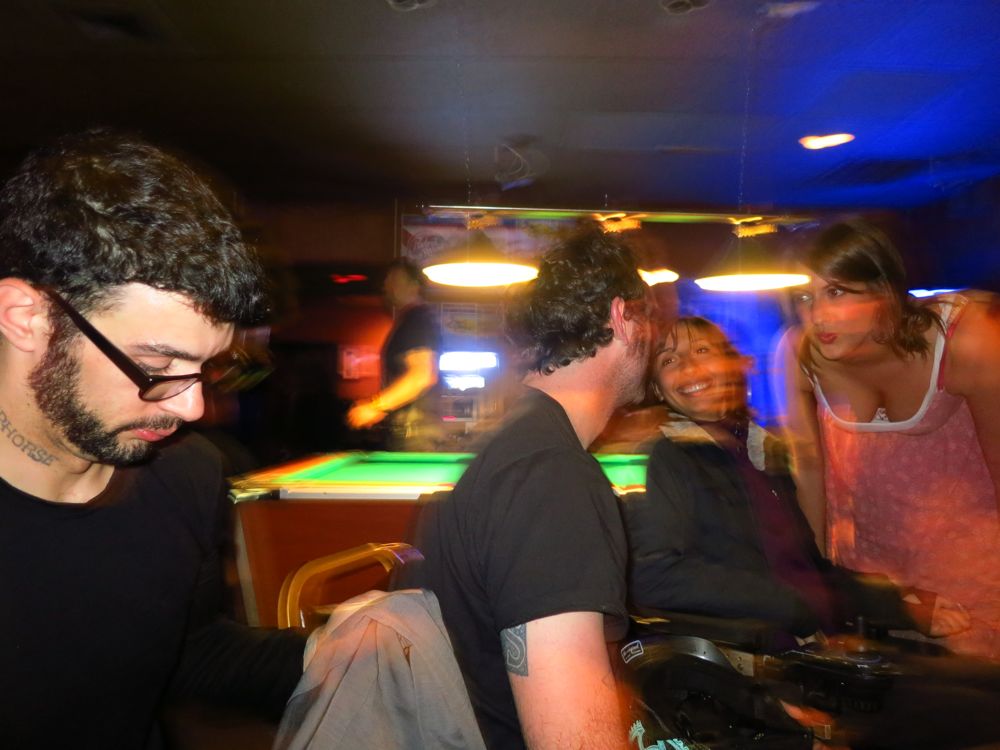 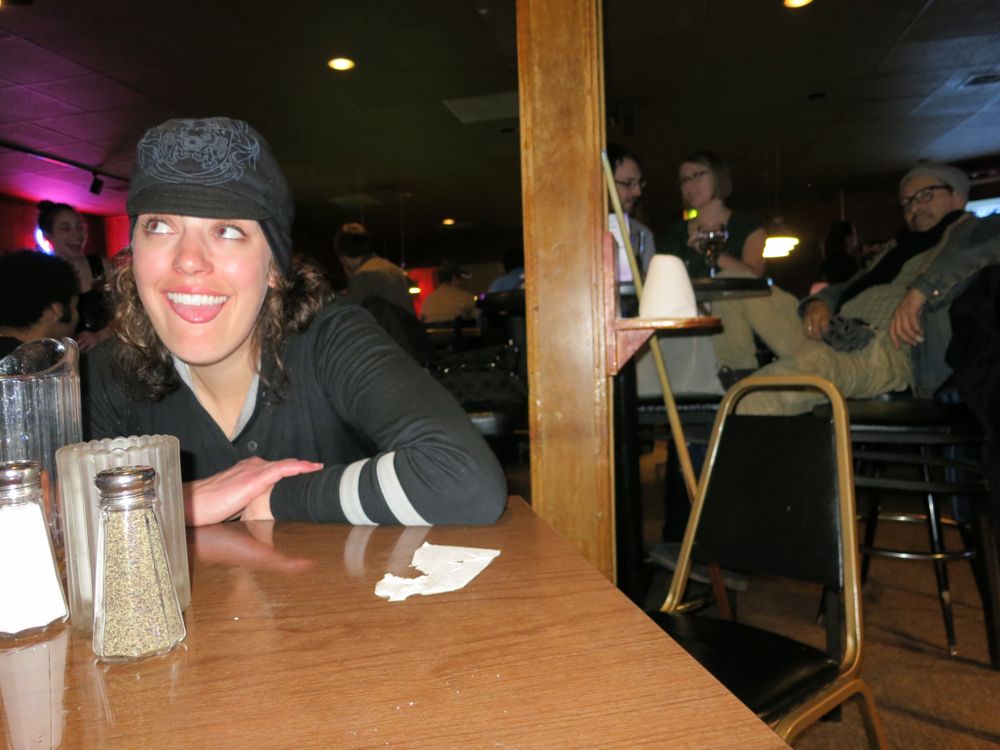 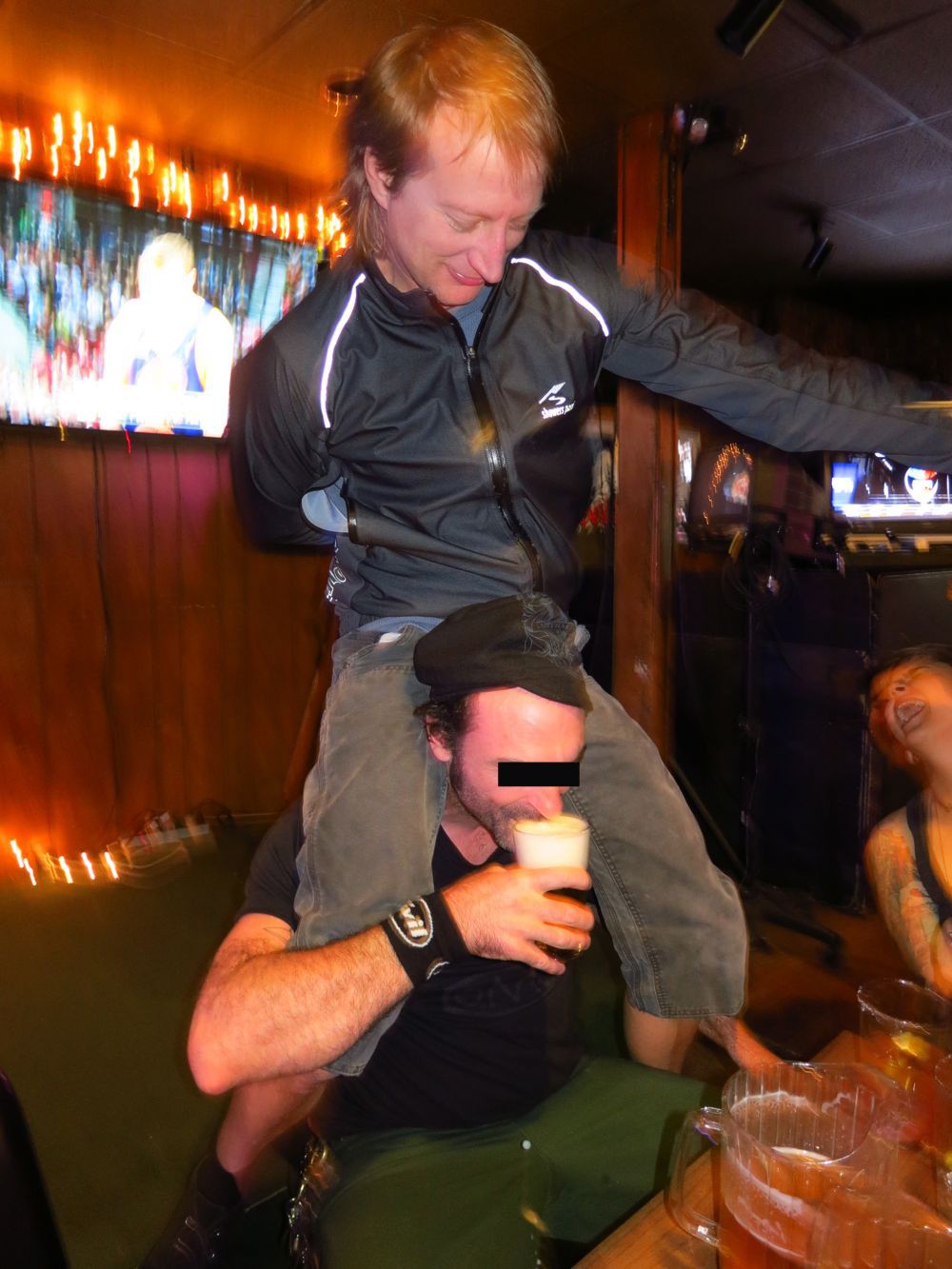 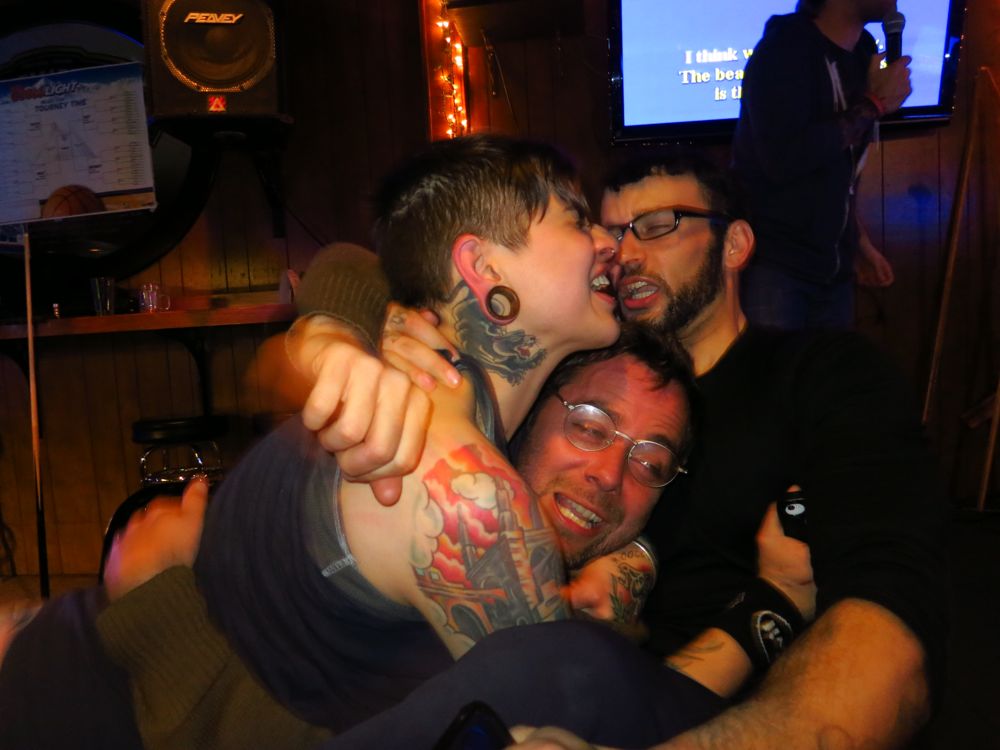 It was about this time in the evening when the bartender very thoughtfully cut us off. Or it could have been after my solid four minutes of doing the running man instead of singing the Proclaimers’ ‘I’m Gonna Be’. Or it was Souphorse swinging young Amanda around the room with no regard for the well being of anyone else at the bar.

Either way, our time at Joe’s Cellar was done, and the time to fade into the darkness was at hand.

The ride home wasn’t noteworthy other than losing my way and taking a short nap on a bus stop in front of a closed Chili’s restaurant.

As per the usual, I left Portland with my tail between my legs and my liver in a plastic bag tucked safely in the bottom of my backpack.

Let us never do that again until next time.

Now that we’ve arrived at the conclusion of that mess, there are a couple of small matters to attend to from the mail bag.

Firstly, Jim from Vecchio’s in BoulderColoradowheretheytakecyclocrossseriously made contact with some news regarding the upcoming snobby bicyclist of New York City appearance, wherein he will be reading from his diary while bathed in the soothing scent of Nag Champa;

“¡Hola!
Might you be so kind as to mention Eben Weiss visiting Bouldercoloradowheretheytakecyclocrossseriously this coming Sunday for a bikecycle© ride from Vecchio’s to his book signing at the Boulder Book Store. Fine folks can go to these places for more info:

We’ll light a candle at Pearl and 11th where your drunk ass was accosted by the five-oh and tossed in the pokey all those many years ago.

If you live on, in or nearby the Front Range, make the plan and stick to it.

Then from Gypsy, I got the standard wordy words that he has become known for sending; 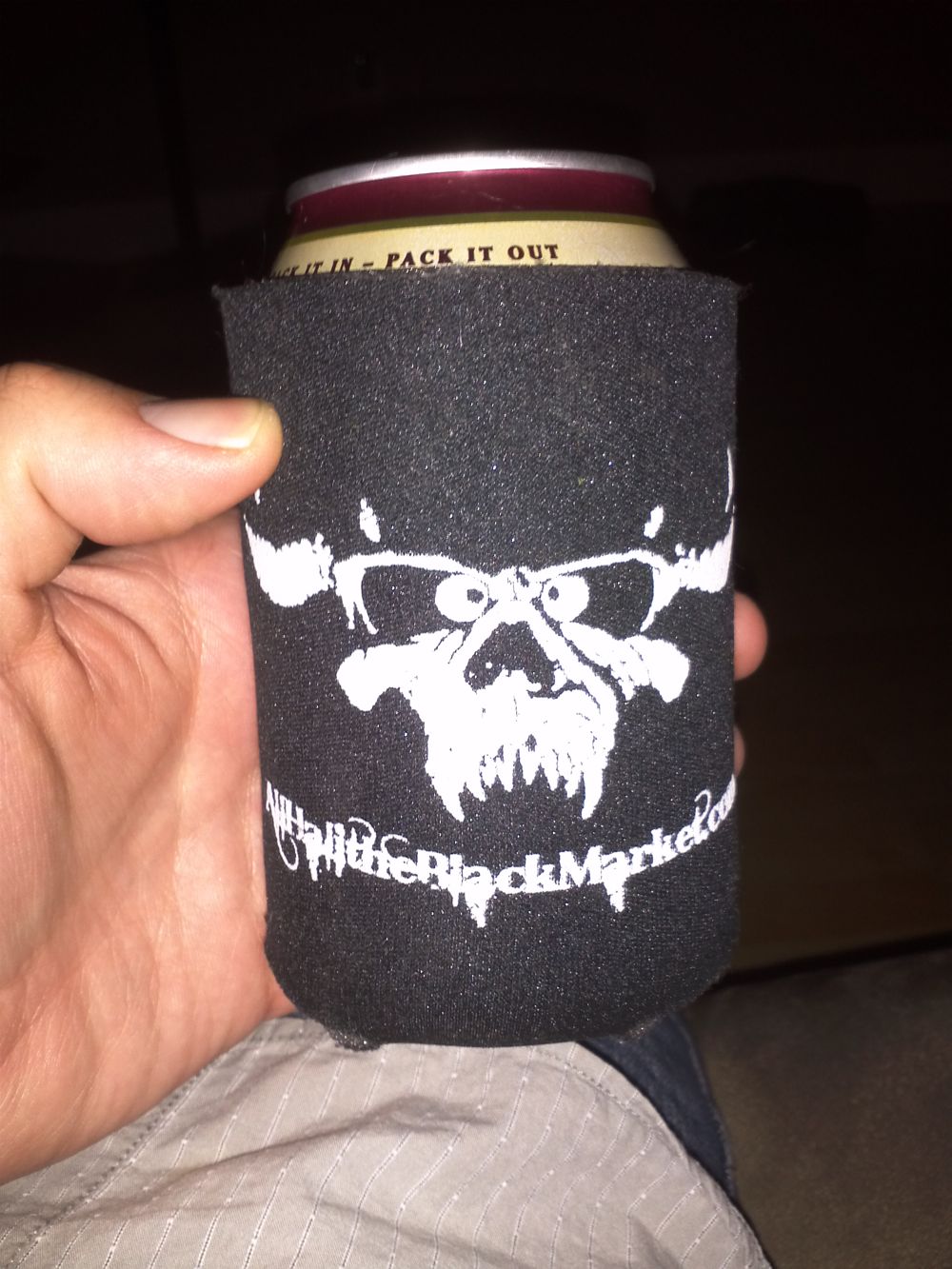 A- I may have puke stains on my collar from improperly combining generic allergy medicine with high octane beer, but at least my hand is handsome.
2- With six years of advanced creative arts education and a $500 cell phone, you too can take crappy pictures just like this one!
C- All Hail the Black Market… Keeping cold beer in the hands of aging punks for 505 episodes.

That’s a trick quiz. The answer is all of the above.

For those who care about such things, Those little 12 ounce cüzies were replaced by the more biggerer 16 ounce cüzies, which I have just run out of. What I have set to replace those is the even biggerer than that 24 ounce cüzie. I don’t have them in hand (so to speak) quite yet, but they will look something like this; 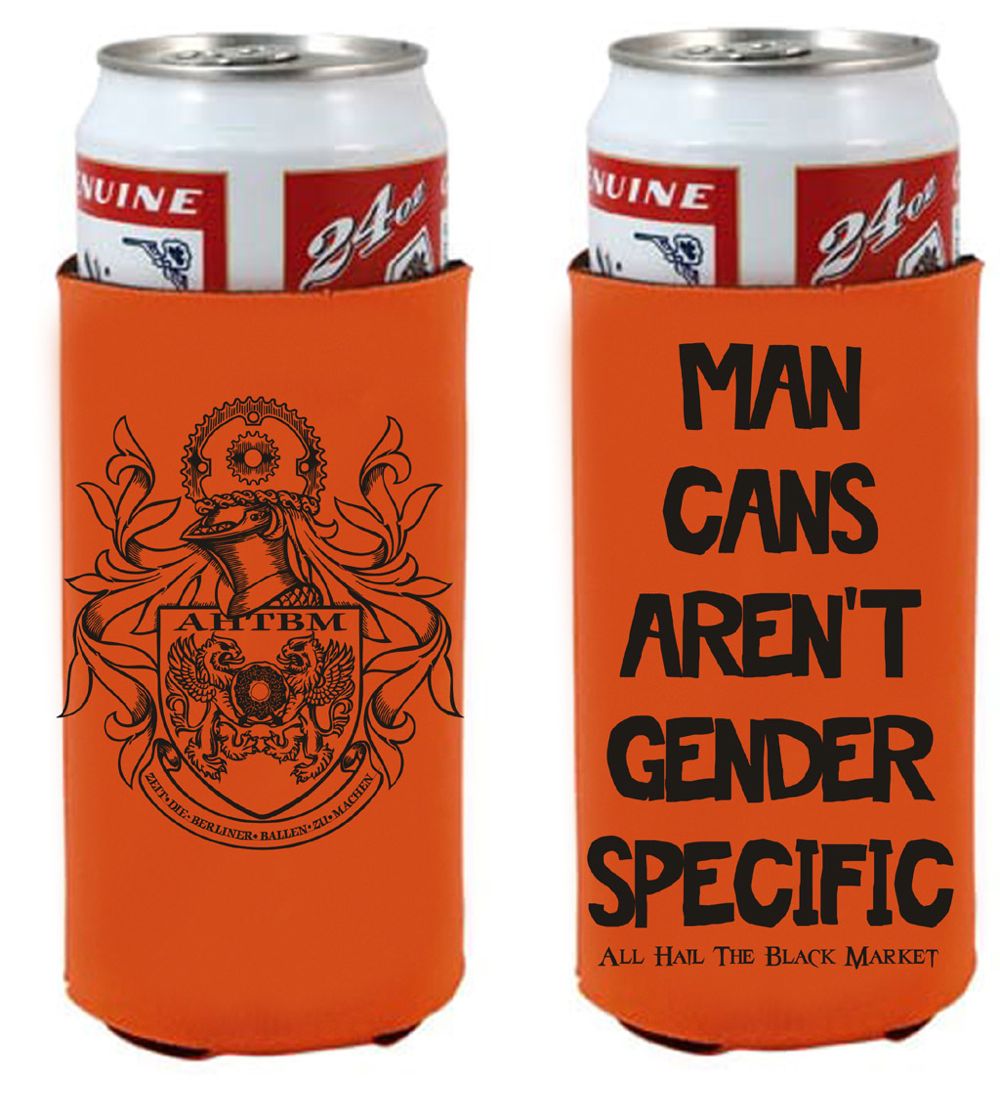 This was in response to the continued ribbing that in this site I run a bit of a boy’s club, which I try to steer clear of at every opportunity. While I recognize and embrace the differences between menses and womenses, I also know that when it comes to getting down with a shell of beer, regardless of what your chromosomes look like, we all have a little bit of Portland in us.

13 Responses to “The slippery slope is a slippery one.”