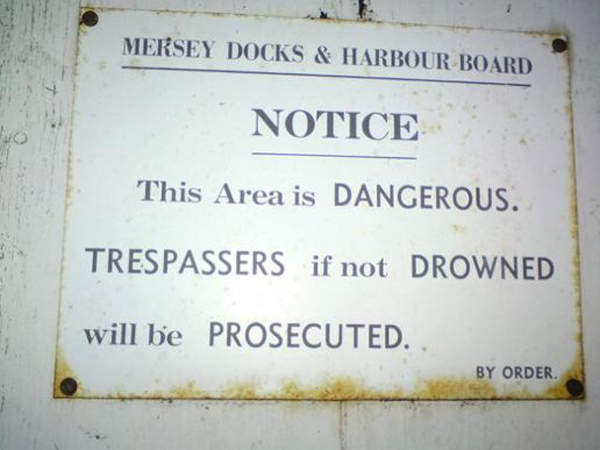 It was a few days ago when in this post I had mentioned kicking off a contest to see who could come up with the best list of ‘would you rathers‘ to gain acclaim and a box of stuff sitting not very far from my desk. After careful consideration, it came down to a battle between kURT, Kurtz (presumably of no relation), and Andrew.

Not being able to decide one over the other, I settled on the age old technique of flipping a three sided coin. It was with that, I have finally not only chosen the winner, but have included my decision after each;

“1 – Hang by a wire saw threaded through your nostril / throat / mouth that would eventually cut through, or give Rush Limbaugh an enthusiastic oil back-massage during his broadcast, occasionally nibbling on his neck and nodding with zealous glee for his rantings?
I would pick massaging Rush because temporarily wanting to die would be far better than actually doing so.

3 – Melt down all your bicycles to drive a Ford Excursion forever, or poop a little upon seat contact at the beginning of every bicycle ride?
Poop… I do it anyway just to feel alive.

4 – Fight one of Michael Vick’s pit bulls, with the opportunity to fight Michael Vick himself if you win, or hang out with Glenn Danzig for a day, constantly asking him if Danny Marianino punches like a girl.
I’d hang out with Danzig. Dogs go for the soft parts, of which I have many, and in Vick’s case, I can’t do anything to him that karma won’t in spades.

5 – Live on a ‘diet’ of Pizza Hut’s Triple Meat Italiano for the rest of your (most likely short) life, or wear only one shirt that reads “Casey Anthony is Innocent (and sooooo HOT)”?
Wearing the Casey Anthony shirt wouldn’t be unlike wearing most of the shirts I own anyway.

7 – Never drink another drop of alcohol, or drink a fifth of Jameson during every shift as a Pre-School Crossing Guard?
Toddlers love drunk people.

8 – Spend every lunch getting chest-slapped and Figure 4 leg-locked by Ric Flair, or slap Stephen Hawking’s hand every time he tries to type?
I’d go head to head with Ric Flair. Now that he’s in his 70s, I might stand a chance.

10 – Floss three times daily with pubic hairs from truck stop toilet stalls, or get repeatedly kicked in the genitals by David Beckham to the beat Posh Spice singing Motörhead’s “Bomber” album.”
This was a tough one because I love Motörhead, and actually saw the Spice Girls movie in a theatre, however my fondness of my balls is also equalled by my disgust of stray public bathroom pubes, so I was torn, but will have to opt for the former.

So congratulations Kurtz. It was a fierce battle, but you have emerged victorious and will soon be in possession of a bunch of random stuff, not the least of which is this; 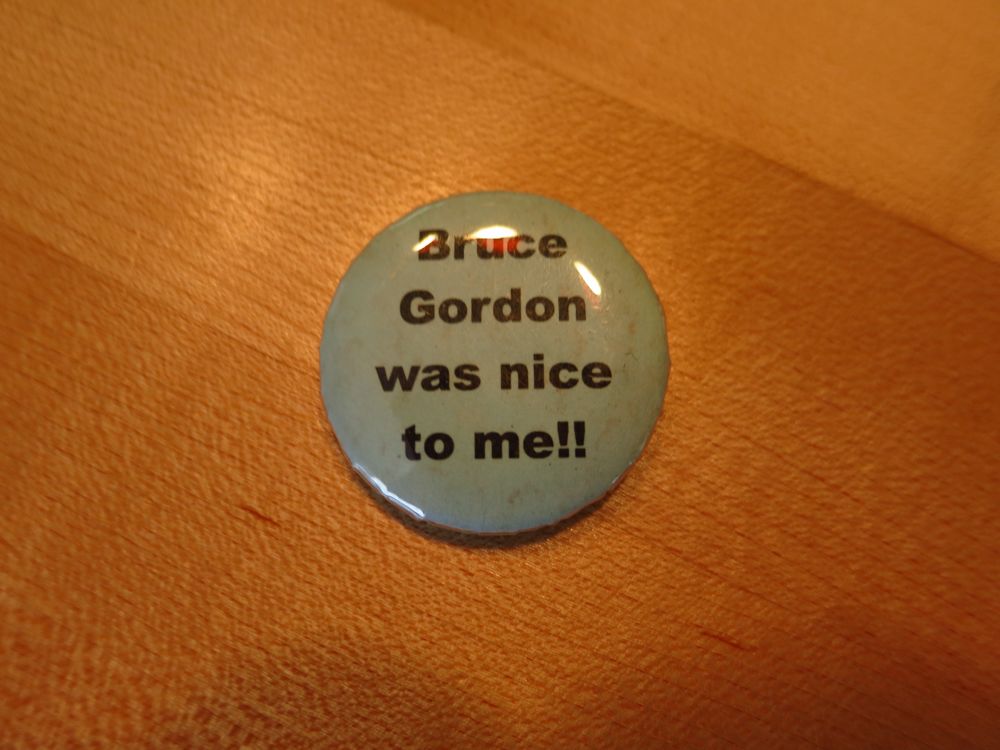 – Courtesy of the man himself.

So thank you to everyone who played along and keep the incredible(y repugnant) ideas flowing.

Oh, and speaking of repugnant, get a load of this bit from Ken. (Those with a weak constitution might want to proceed while looking through their fingers);

“Was breaking in a new trail system the other night when one of our riders fell, got up and said, “It’s all good, well wait, maybe not good.” He then got a little wobbly, sat down for a bit, then hiked on outta there; pic of his arm and new friend attached… The lesson? Be prepared, you just never quite know what’s gonna go down.” 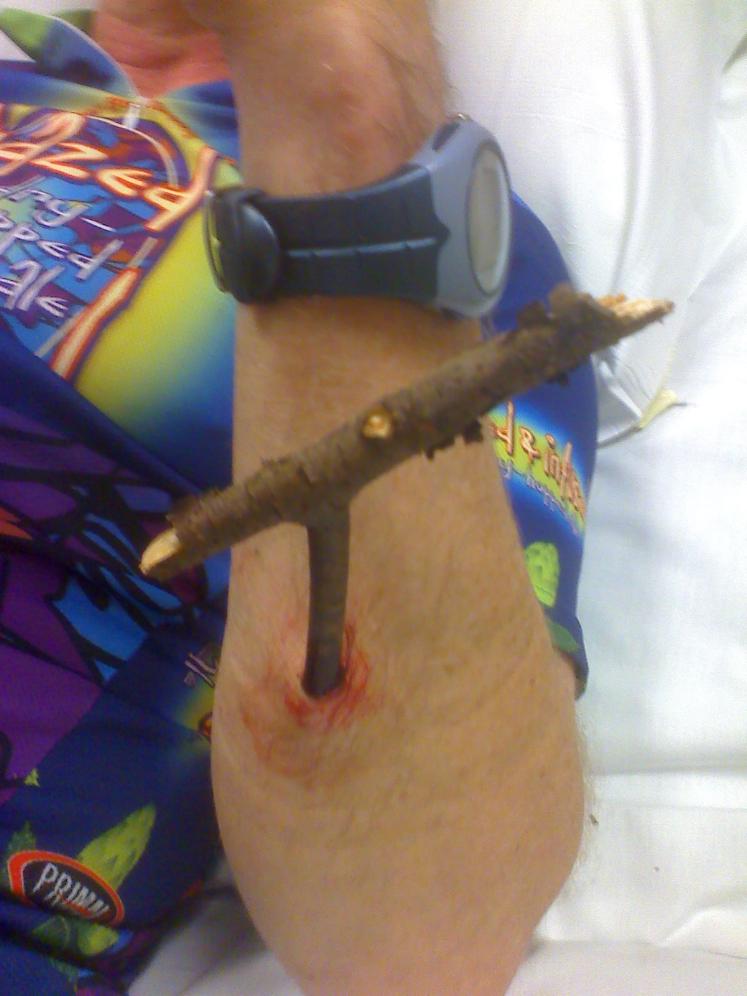 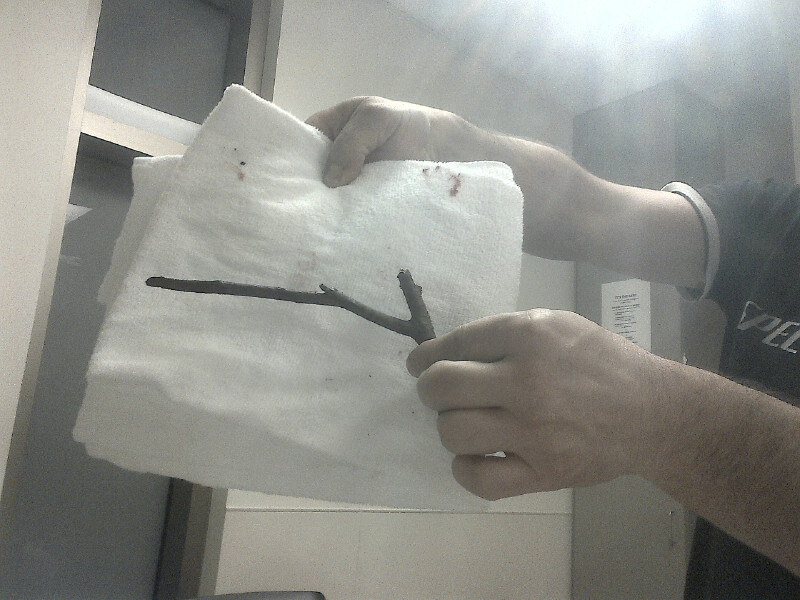 What did I tell you?

That jersey is absolutely horrific.

Something that is most assuredly better than a stick in the eye, (or arm as the case may be) is Corndog’s world famous Cüzie Of The Month Club.

What? You’re not a member you say? That’s absurd, because for the minimal price of less than six dollars a piece, you get a handmade and fully awesome ‘travela‘ (as the Australians say) delivered to your door once a month. Inspired by Matt Case’s ‘charter member’ cüzie’, I begged Cory to make me one of my own, which at this point is neck and neck with my other very most favorite C.O.T.M.C. offerings;

Think of it as an investment in your future.

Speaking of which, I understand this month in which we are currently engaged, the Handsome Brand AHTBM collaborative Shop Bike is going to finally make its way into the hands of eagerly awaiting individuals all across this planet of ours; 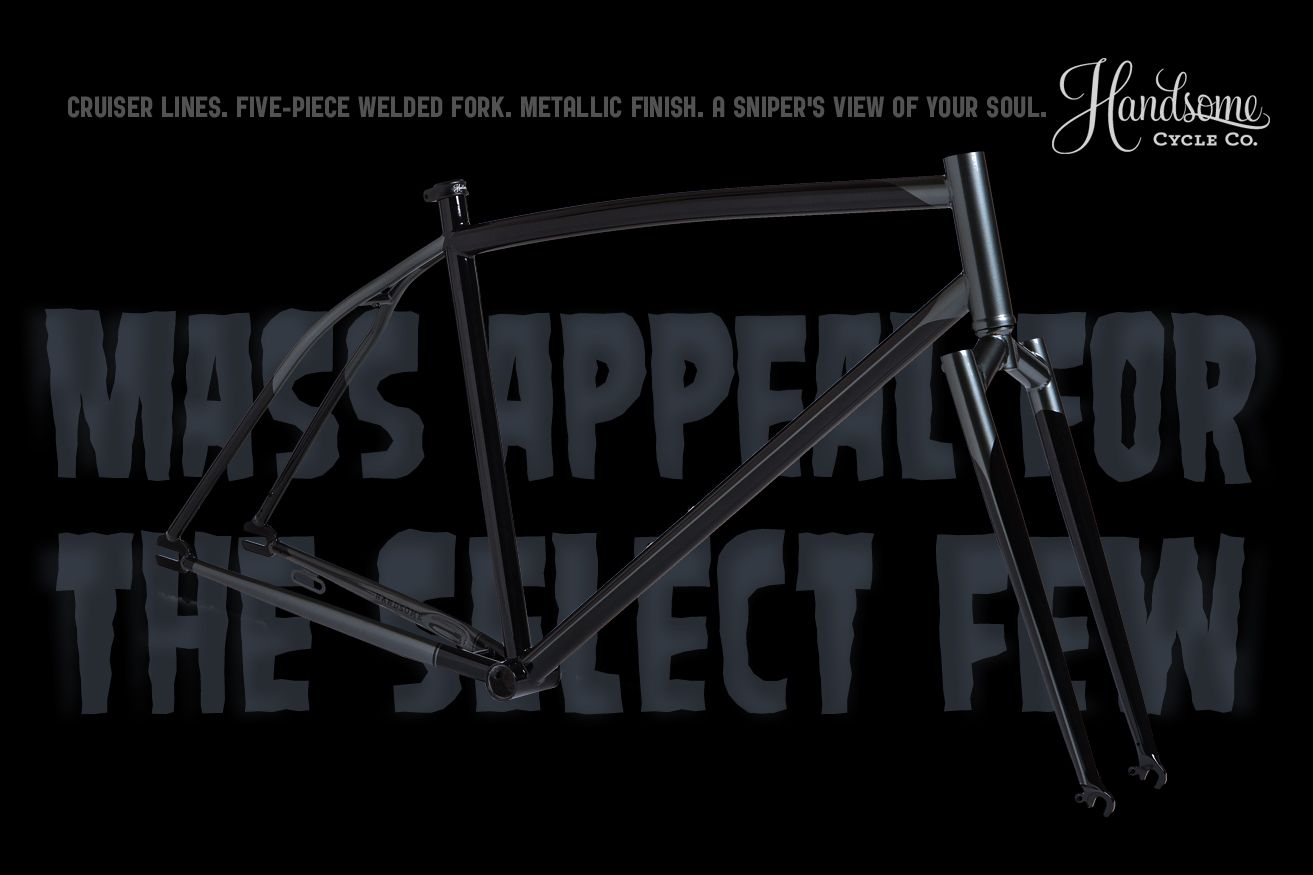 With for smaller sizes, mediumer sizes, and larger sizes available, there is a frame size for nearly every body type, aside from tinys and giants. Remember, these are pretty limited in edition so if you want one, get ’em here, and then simply wait for a few weeks before they start drop shipping from Handsome’s Portland East headquarters.

Moving on with other business at hand… Last Friday I had mentioned that my overly paid and intoxicatingly aromatic bike mechanic returned from his trip to Aruba and had installed a set of Paul Price and Company Bicycle Component Manufacturing Company bikecycle stoppers on my chocolate brown lova, also known as The Dirtbomb; 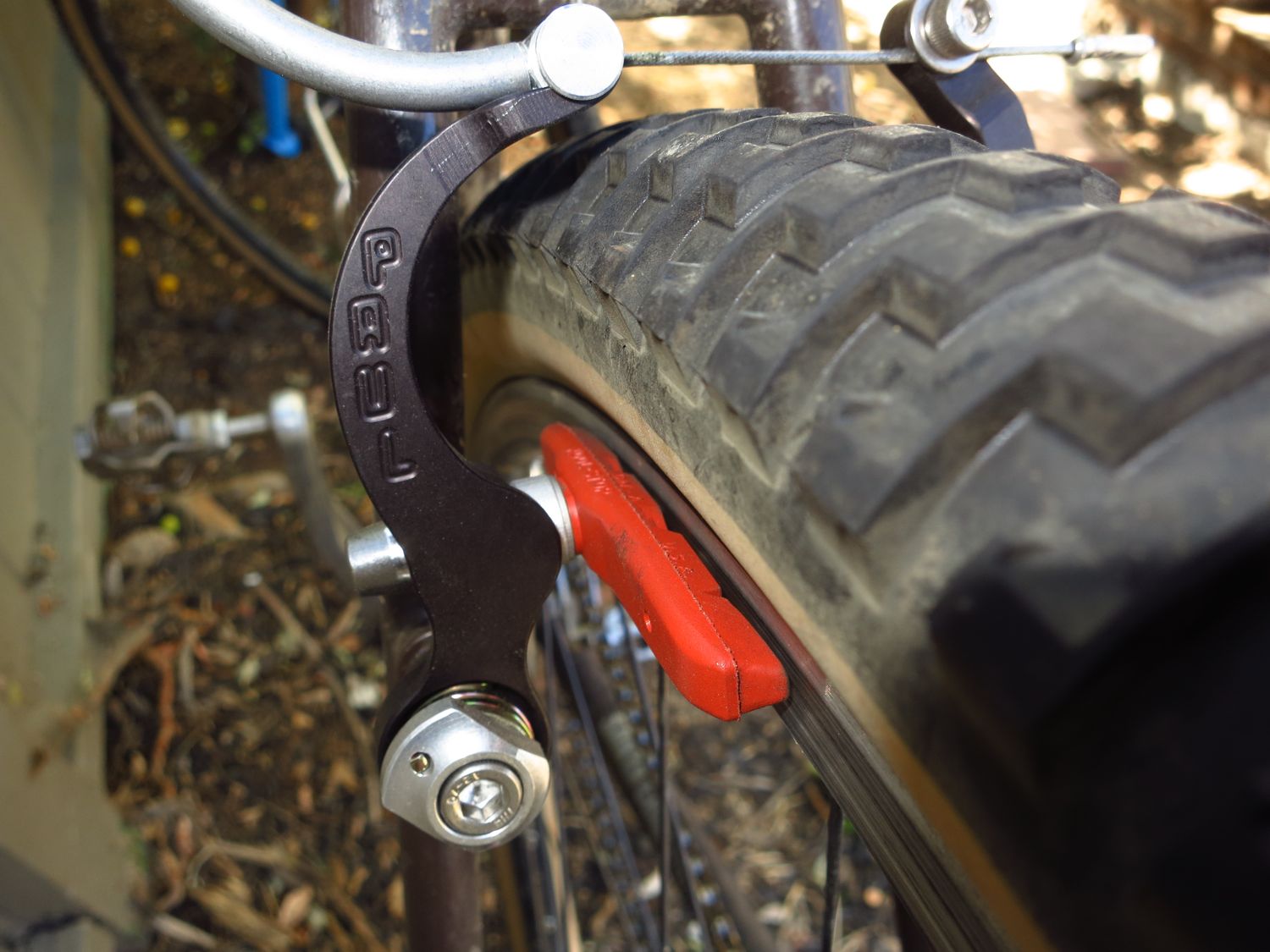 Now I hope that at this point you trust my perspective enough to know I won’t gush on an item simply because it might have been given to me. The downside of being honest is that companies might be less forthcoming with their product, but if it’s an item I didn’t like anyway, it’s no great loss.

Anyway, I was hopeful that I would like them, as I have become a huge fan of the somewhat similarly executed TRP CX8.4s. ‘Liking them’ doesn’t do my feelings for what Paul has accomplished justice. Upon first ride, they reignited my love for the bike on which they now sit. They work like an absolute champ, and if my initial outings on them are any indication, my far from sturdy wrists will appreciate not having to retain a death grip on technical descents.

The proof will be, as they say, in the pudding however, as Fish from Bike Monkey Magazine and I have scheduled a man-date/excursion in his backyard of Northern, Northern California which as I understand it is a six or so hour traipsing over trails, logging roads, secret easements, little-used paved roads and the like. If I return from that trip not cursing the name of anyone responsible for getting me there and back (myself included), I would call it a success. I also understand that this route has claimed its share of victims, so its got that going for it.

That said, I will be getting back in one or so pieces with barely enough time to write a post on Wednesday, so for better or worse, I will catch you cats and kittens on Friday, June 8th.

So you get a post now and you’ll get a post later, because as Max Lerner so aptly (and possibly ironically stated, depending on your perspective), “When you choose the lesser of two evils, always remember that it is still an evil.”

10 Responses to “The lesser of two evils.”