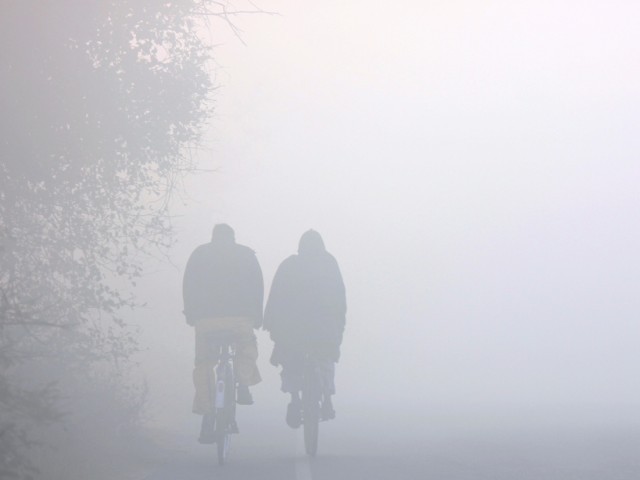 Between the ringing in my ears, the residual bit of Vegas in my throat, and the damage in my brain, during my return I picked up a sweet head cold. Not a regular kind mind you, but the kind where you have night sweats, and your teeth sockets hurt. I played, so I’ll pay. So goes the rule.

Suffice to say, the 2012 Interbike trade show was a success, surpassed only by our Underbike Industry Mixer©, but we’ll get to that eventually .

As always, there was some new stuff and some old stuff and lots of talk about nothing. The primary attraction for me has always been for the last dozen or more shows (I had an appendectomy one year, so I’m pretty sure I missed that one) is to see friends and to invent new ways of causing trouble with them.

To that end, this year was right on the money, so sit back, allow me to turn on the humidifier, and soak in the sights and sounds of whatever it was that happened these last three days.

I launched the whole shibang off with a four hour layover, that turned into a six hour layover in Long Beach. Maybe that’s where I got sick; Then, minutes after settling into my room, Stan Beaver arrived to mess my bed up; This also could be when I got sick.

After a bite of dinner, we moved onto some spirits. For years past, on the evening before the indoor show opened, the Surly Bikes crew would post up in the Treasure Island lobby bar, snagging all who wandered by. Effectively, this was the place where you could meet and greet with like minded ner-do-wells. It turns out that they still do the same thing, but have opted to buy their spirits from the drug store across the street, and then post up in front of the hotel to engage in some good old fashion sidewalk drinking; 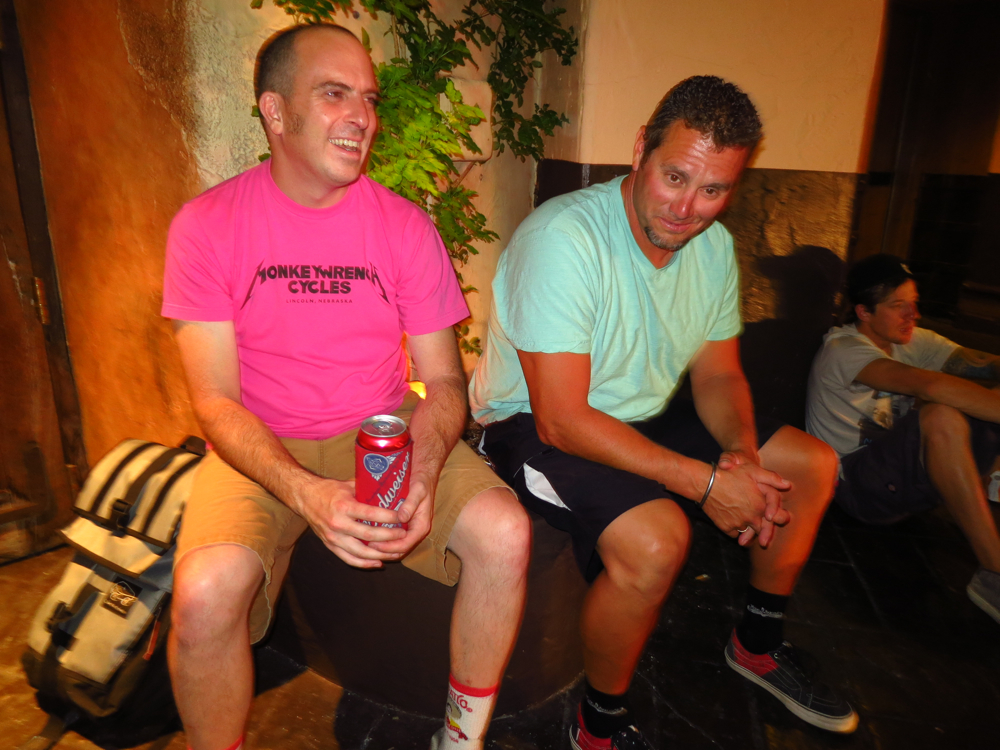 With the exception of Handsome A.K.,(to whom I believe at some point I’d mentioned that I wanted to live in his moustache), it was a veritable who’s who of underworlders.

Now please understand gentile readers, I have a formula I stick to when engaging in Interbike shenanigans. On the first day I don’t go too big. Maybe a couple of drinks, a nice dinner, and I wake up early for a swim and a healthy breakfast. It’s been a program from which I have never strayed, and one that has never failed me. Until I met this guy; I was like Gollum listening to his Precious, and the final shot found while checking through my photos the following morning proves that things went soundly off course about here; I’m pretty sure that’s when I got sick.

I’m a committed bike blogger douchebag (same diff) however, and despite the fact that I had a creeping plague, and a head full of broken glass, I knew that the show must go on. As I do every year, I started the day with my brother in arms and veteran of the industry, Jean Oh, and began our rounds. I made it downstairs to see friends at Paved and BIKE Magazines; 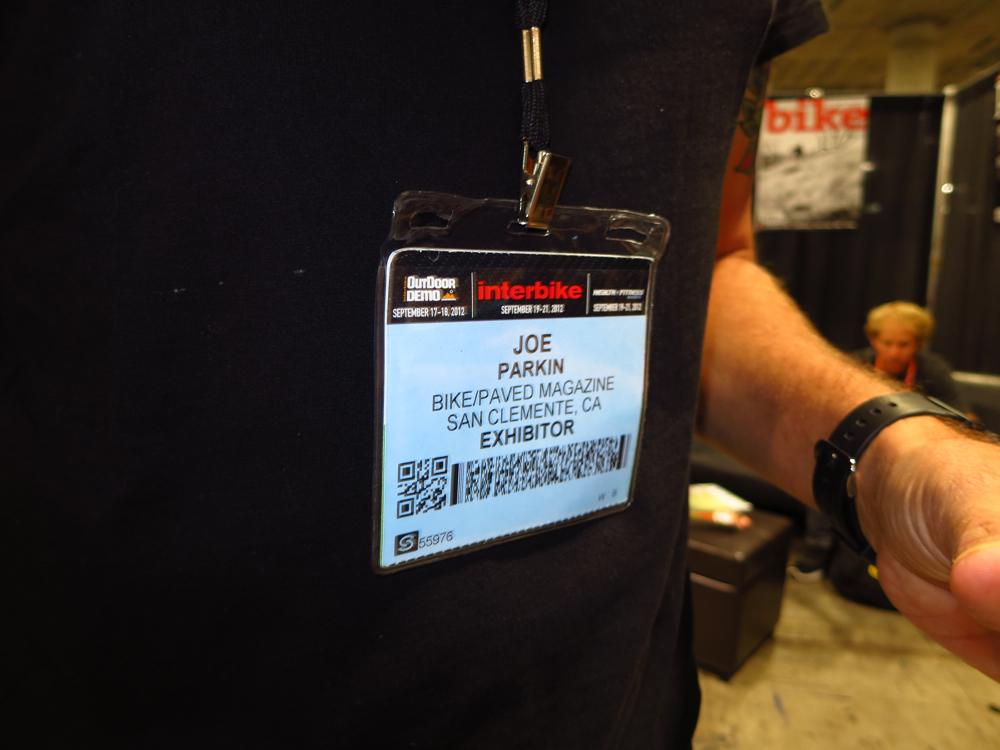 Among other things, we discussed the matter that between Gene and me, we have forty five years of industry experience under our belts, and how we might apply Steve Albini’s very valuable declaration of “I will get paid.”

No word on if we figured that one out yet.

As I was making my way to find the newly relaunched Swobo brand’s booth, I happened upon an old friend of mine who had left the industry to work on ‘Robot Chicken’, but got drawn back in by a new imprint called Alite Designs; -Who upon initial glances appears to have a similar direction to Poler. Why, they have even done the Poler Hangover Sack© one better with their Hangover Suit©.

I’m gonna have to make a phone call about that.

Julie also introduced me to their line of camping chairs, which are light, easily collllapsable (but would be more so with carbon supports), and way more comfortable than sitting on a rock, or a log, or a rock on a log; 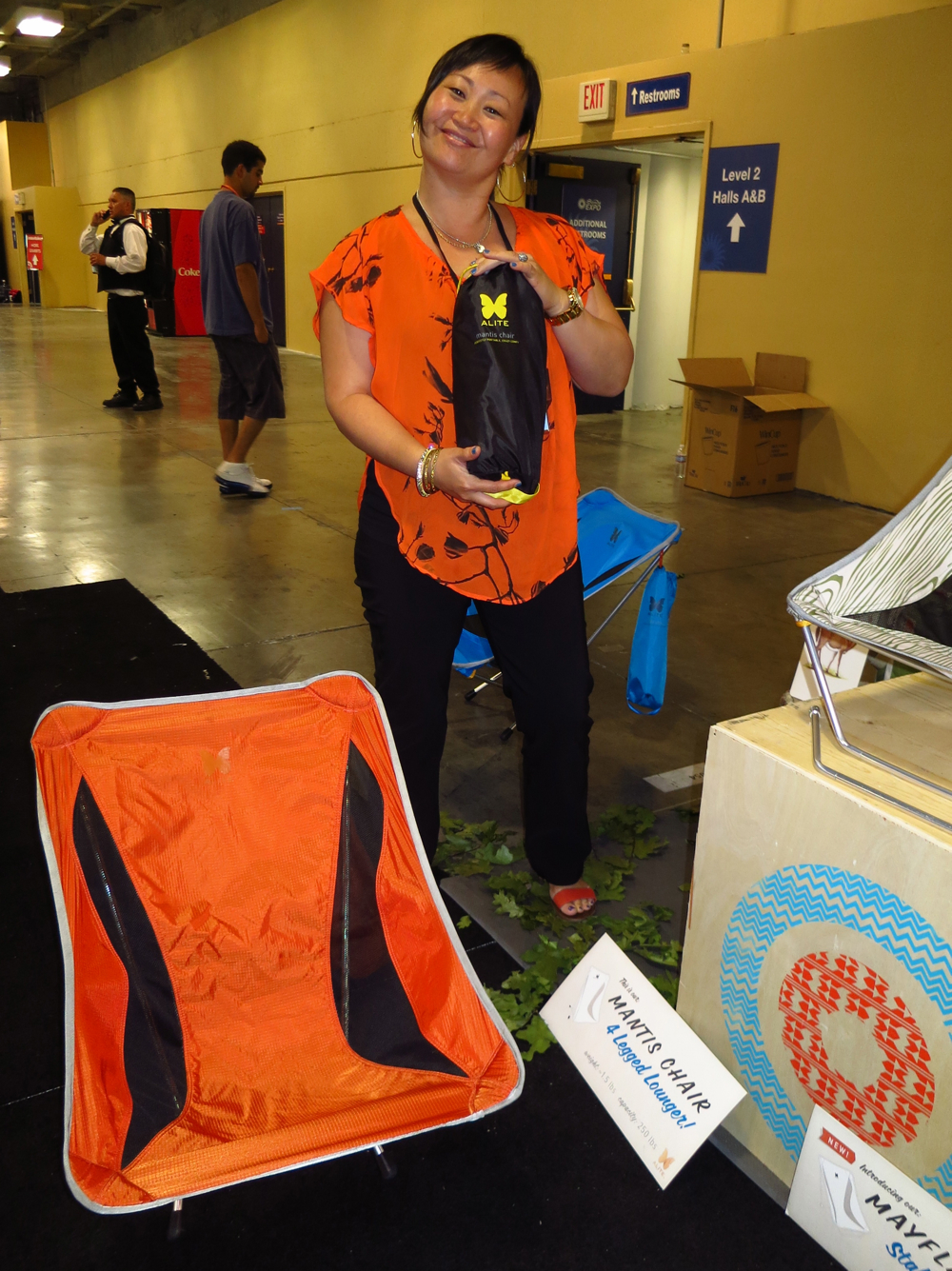 She even sent me off with a set of their spork/knife combo, which promptly went into my camping stuff.

Finally I tracked down the Swobo booth and got a load of all their goods; 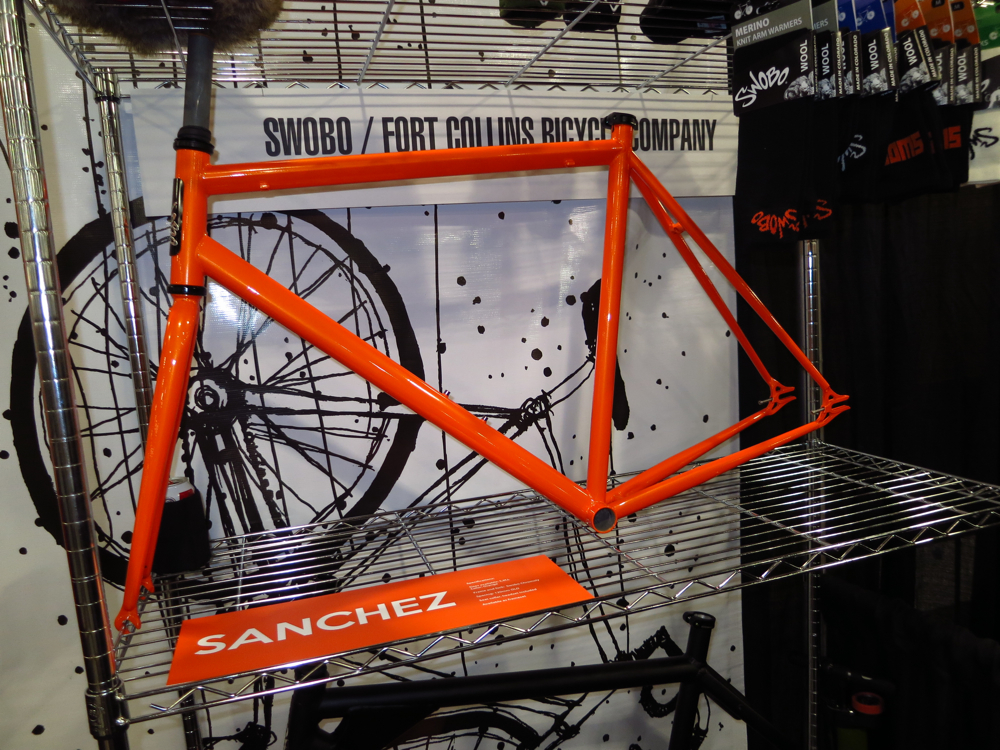 All of which, (with the exception of this Chinese Army hat, worn here by All City’s Jeff Frane;) -is made right here in America. Perhaps the most exciting bit of news was that the length of their wool jerseys has been extended, the sleeves are tapered to the cuffs, and the rear pickets have been reinforced; It might not seem like that big of a deal to most, but those three points were, while I was in the company’s employ, what I screamed my throat raw about. The new clothing looks great, the bikes look great, and the Swobo branded Dank Cüzies looked great. I’d mentioned it many times, but at the risk of repeating myself, as far as product and direction go, the third version of Swobo is my favorite.

But it was then that I had to light the fire under my ass and get cracking. Making my way along I came across a sweet prosthetic arm; 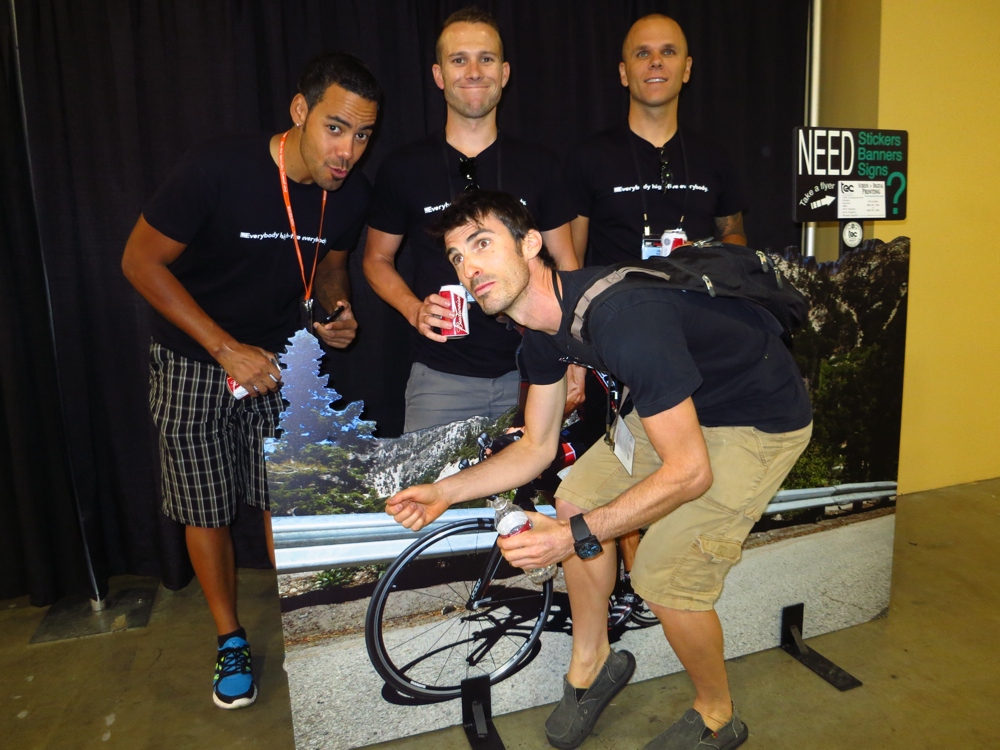 The latter of which taught me the ‘high five with the right hand, and then pop the recipient in the balls with your left’ trick.

I don’t know if it’s cause he’s mad that he’s tall, or that I’m a better bike rider than him, or what, but dude hits me in the balls more than anyone else I know.

Then, once the pain subsided, we saddled up next to this guy, and this guy; To be sure, there were a lot of the world’s problems solved on that day.

Then somewhere along the way I shared a long embrace with this lady; One time about a year ago, we got cut off at a bar together.

That’s like sharing the horrors of war with a person, and from that point forward, we were inseparable.

Before skedaddling to a pre-dinner drink, I stopped by to slap palms with those involved with the previously mentioned Shinola Brand; 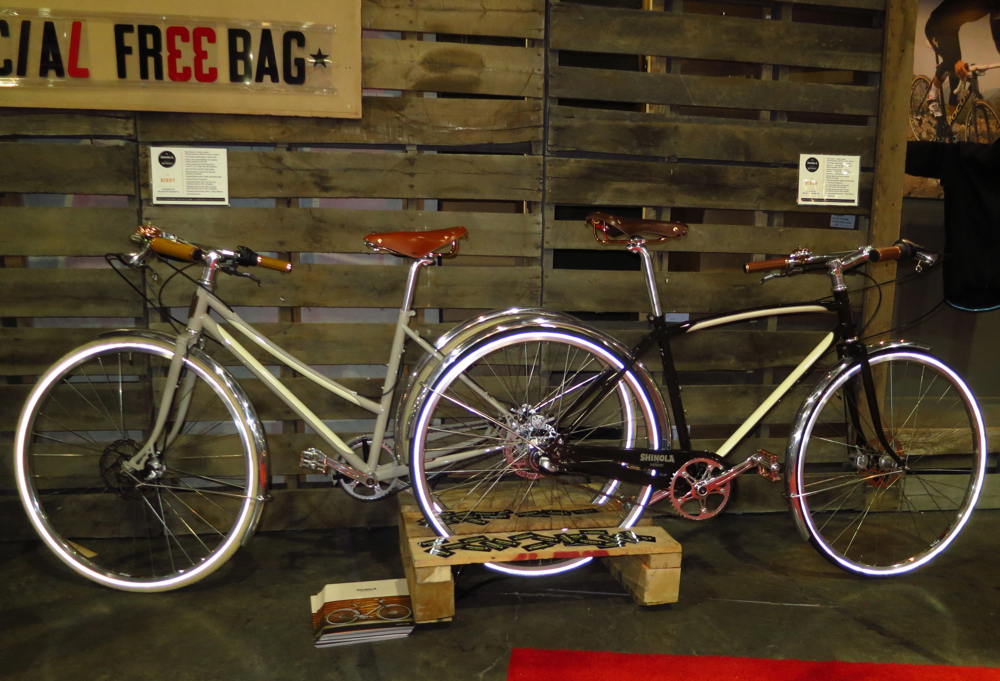 Shinola debuted some very pretty bikes, all cloaked with a slight tinge of mystery, and after speaking with Sky and Jaques about some super secret matters, I emerged from the meeting with a business card that said ‘Oct. 4-6. Go to Detroit’.

I do what the business card tells me to do.

I’ve neglected to mention that on this day in particular, the calendar clicked over on me to a brand new year of life, so to celebrate, I bro’d down with Nico Parkin Has No Hair; Come to think of it, that’s probably where I got sick.

So comes the conclusion of day one and two. Or was this just day one? I can’t keep track. Come back on Wednesday and we can fumble through the trip’s end together.

By the way, as I was leaving town en route to the show, I got a brand spanking new run of t-shirts that if you want, you should totally get; Though it won’t protect you from head fog, it will make you look like at least a half a million bucks while you’re in it.