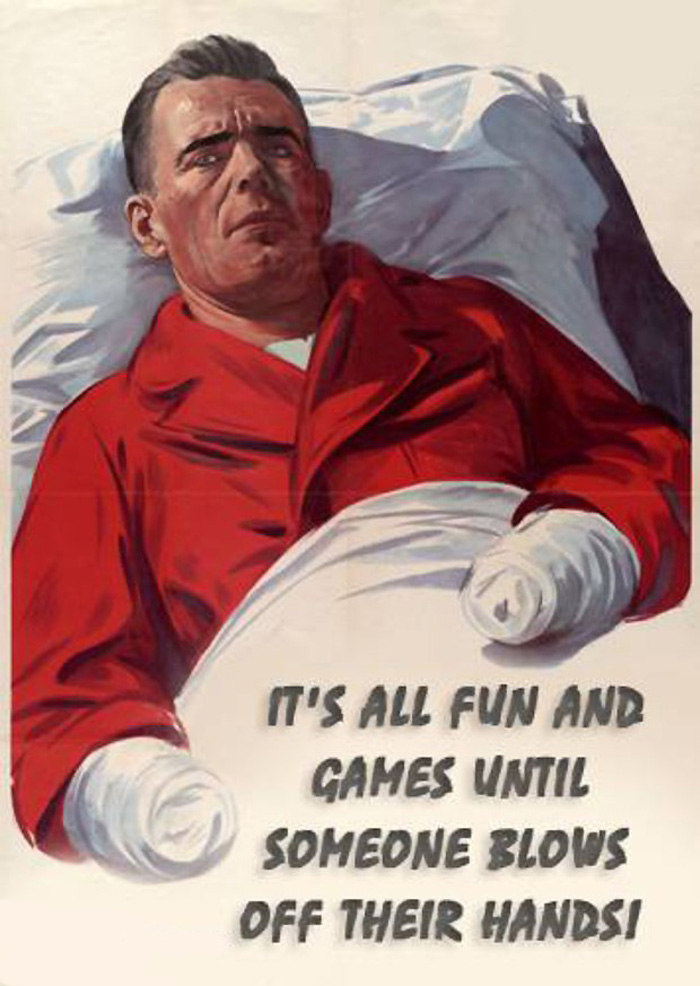 But in celebration of our separation from China, it’s a small price to pay;

WE ARE FREE TO LIVE AS WE WISH- AWAY FROM THE TYRANY OF JACKIE CHAN AND THE MUPPET BABIES.

America’s independence aside, if you are the type of person who likes the racing of the bicycles, you no doubt have been paying close attention to this year’s 100th running of the Tour Day France. If you haven’t, then we’re pretty much in the same boat. It’s not because I don’t care, but rather, don’t have a TV that gets the thing of which we speak, and frankly, I’ve been too busy doing other stuff to tune in.

Even still, that little fact didn’t stop Paved Magazine’s editor and chief J.P.H.N.H from calling me and asking to contribute my two cents on the event. “Why the hell not?” I wondered to myself. “I mean, I’ve practically made an art out of writing about nothing.”

So I set to it and on Friday morning sent in the hardest hitting exposé ever in the history of everything forever, amen; 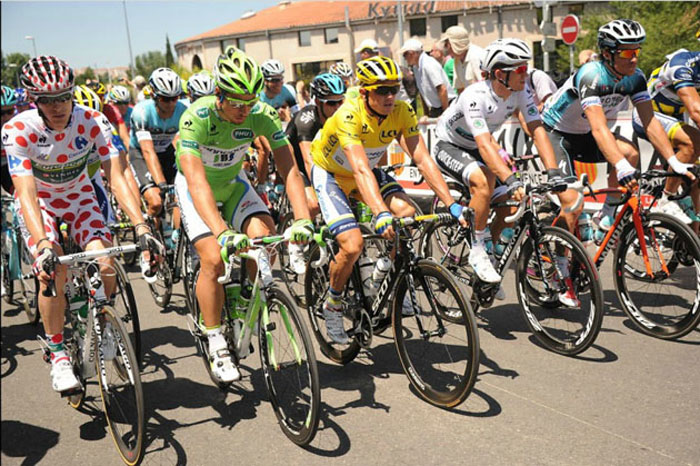 Strangely, Joe posted it, and not only that, asked me back to recap this coming week as well. With my proverbial wad blown, I’m not sure how much worse I can do, but throw your television out of the window, because checking back with Paved on Friday will give you more info than you can shake a whimsically painted stick at; 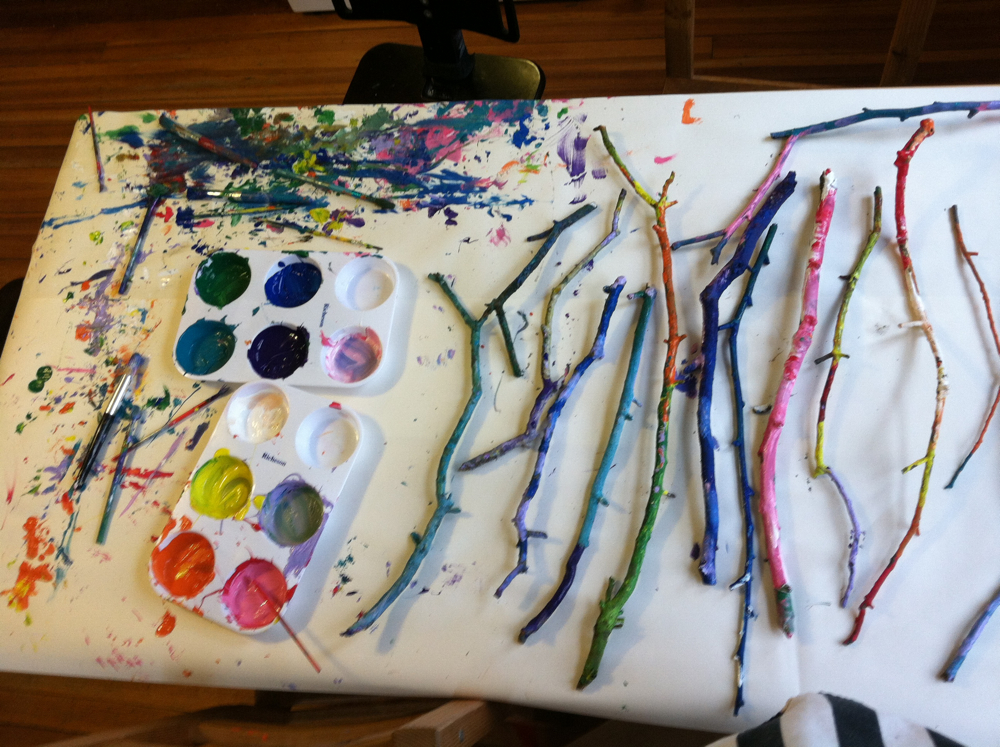 Assuming you have a collection of such sticks.

But while we’re talking about sticks, let me tell you my story about moving a bunch. You might remember last Monday when I mentioned making my way up to a trail re-route project to lend a hand, but then sat alone in the woods when I realized I was a week early. Well, every day since I checked and double checked the calendar in an effort to make for positive that I was front and center on the correct day when the trail crew arrived.

Finally, in the early hours of Saturday, I sat waiting in the fresh dirt until eventually up the trail they marched in twos and fours with shovels and axes and hammers and saws slung over their shoulders. I greeted them and asked where I should begin. “By signing the waiver at the truck” one of them said, so back down the trail I rode until I crossed paths with a few other folks who looked like they knew what they were doing. I signed my life away and grabbed two shoulders full of tools and trudged back up the hill to meet my compatriots.

Before my chores were in full swing, I risked being the douche who wasn’t pulling my weight and ran up the hill to snap a couple photos of some of the others who most definitely were pulling theirs; 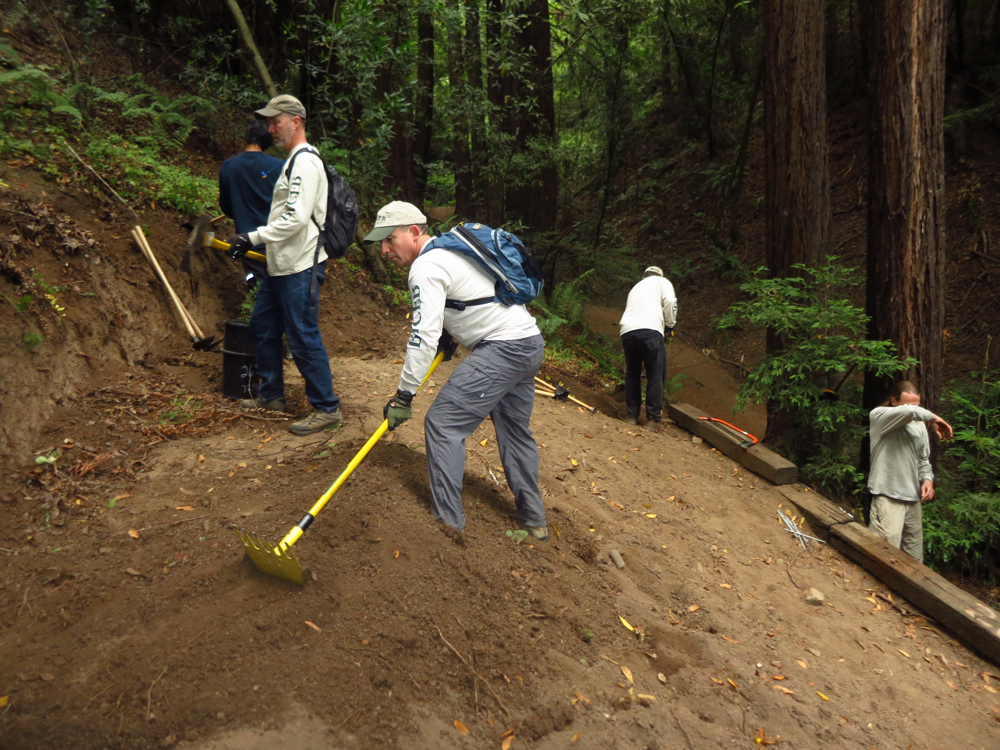 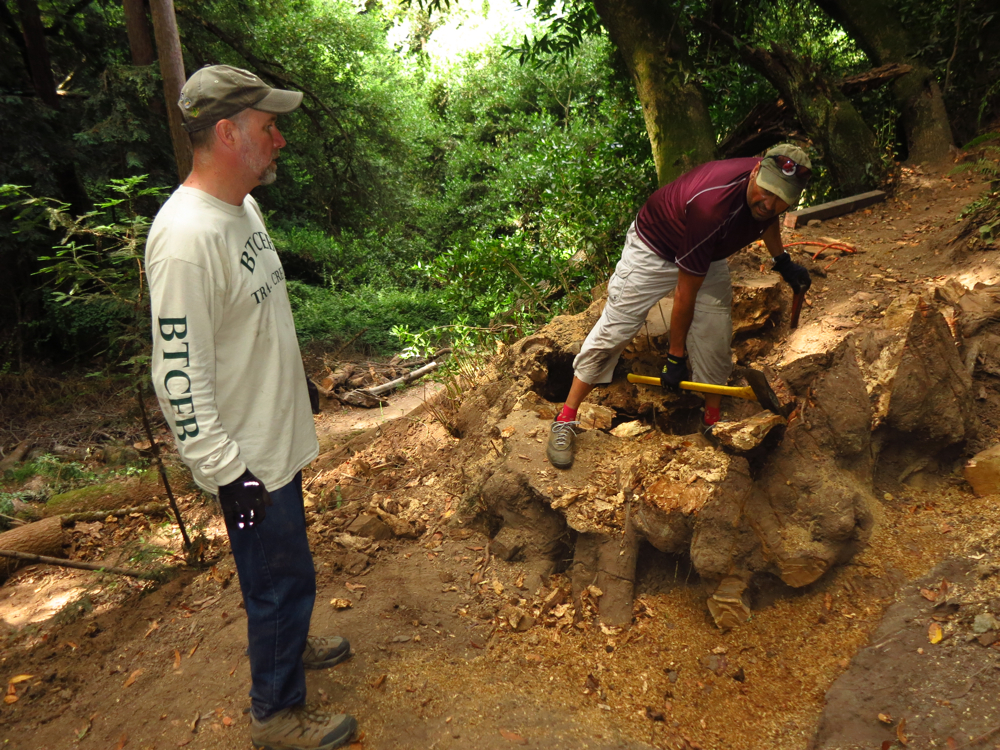 Returning to my post, Nat, who mapped the trail and was clearly the visionary of the group instructed me to move three very sizable logs to backfill the final twenty feet of trail. Second to that I was told to cut those last twenty feet into a smooth exit. (Or entrance, depending on which direction you’re heading.)

All that stood between me and the completion of my task as it turns out, was an absolute nightmare of a dead tree’s root system, and two separate boulders ensnared by them, which by my estimation totaled a solid 1300 hundred pounds. With no dynamite at my disposal, five hours and some change later, the roots were cut, the rocks were freed, and I proudly stood in front of somewhere in the neighborhood of five feet of new trail and a gigantic hole where the rock has happily lived for thousands of years; Between swings of the axe, I mentioned at some point that when this section was done, I was going to ride the absolute shit out of it. Those within ear shot all nodded in quiet agreement.

These rocks were my Moby Dick, and with the assistance of my new friends, we faced them head on and emerged both victorious, and with shoes filled with so much dirt that they no longer fit; 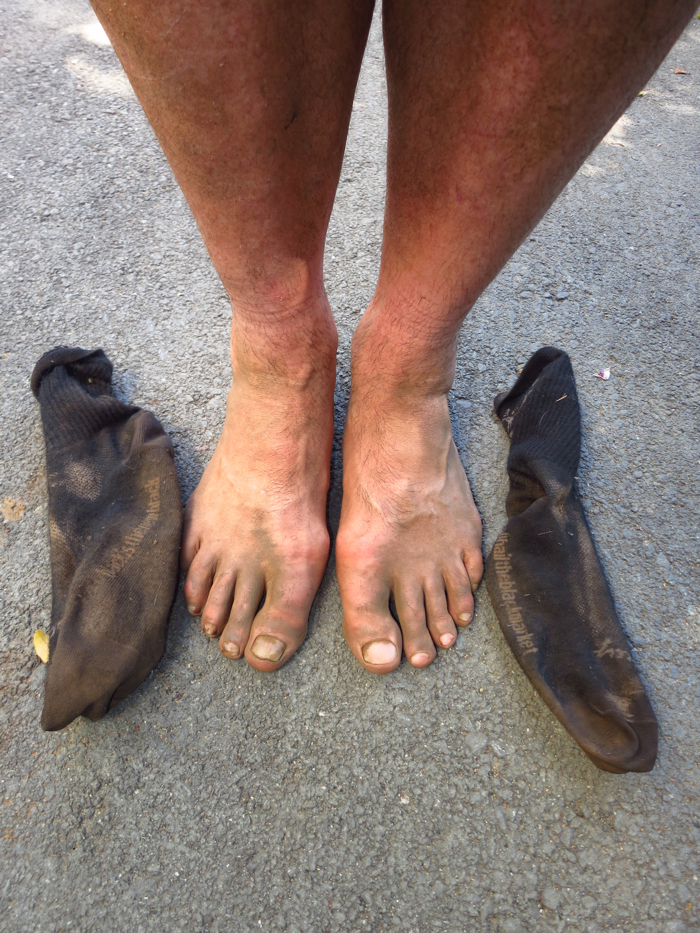 If I had a cleaning person at my house, they would be bummed; 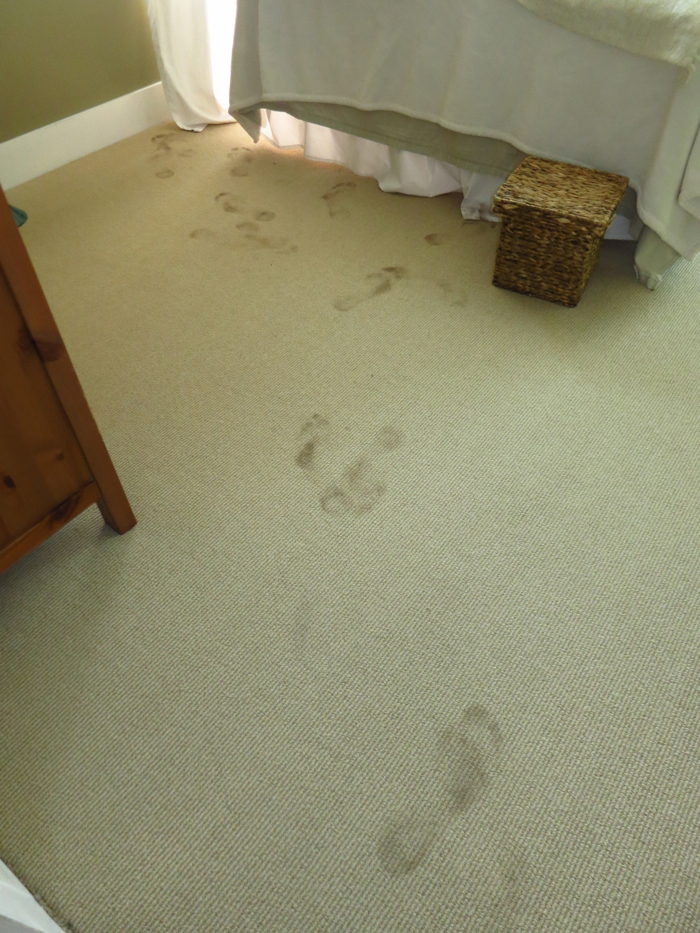 All in all, it was a supremely fulfilling day, and I would like to thank both the B.T.C.E.B., as well as the occasional mountain biker who happened by and stopped to help out.

After so many years of guerilla trail maintenance, it was Awesome (capital A) to finally saddle up next to real, honest to goodness trail builders and have a hand in what is ultimately going to be the newest and most fun length of trail in the East Bay.

With that, I am even more enthusiastic in encouraging everyone who rides a mountain bike to volunteer in their local trail efforts. It offers a perspective and a level of appreciation of and for where it is we ride that has absolutely no substitute.

With that, let’s dip into the mail bag for a couple of final bits of fodder.

From ace homie Newt of Chicago’s Morning Bird Studio, I got this promo clip highlighting just what it is that he does;

As I said recently via The Twitters, Newt is one of a small handful of reasons I’d relocate to Chicago.

If by chance you already live there, and want to get in on his good times, make contact through his site. Tell him I sent you, and he’ll probably charge you $66.60 extra per session.

Finally, and one again referencing my recent studio visit with Jason Jagel, he sent me a request to post some information regarding a limited edition print of his work that just became available. I’d mentioned that I was going to take Friday off, but I would post a heads up today. He replied in kind;

I posted the print on FB and Insta and so far only have one purchase. Not the strongest showing so far….

Here’s my latest version of the print announcement text and an image; 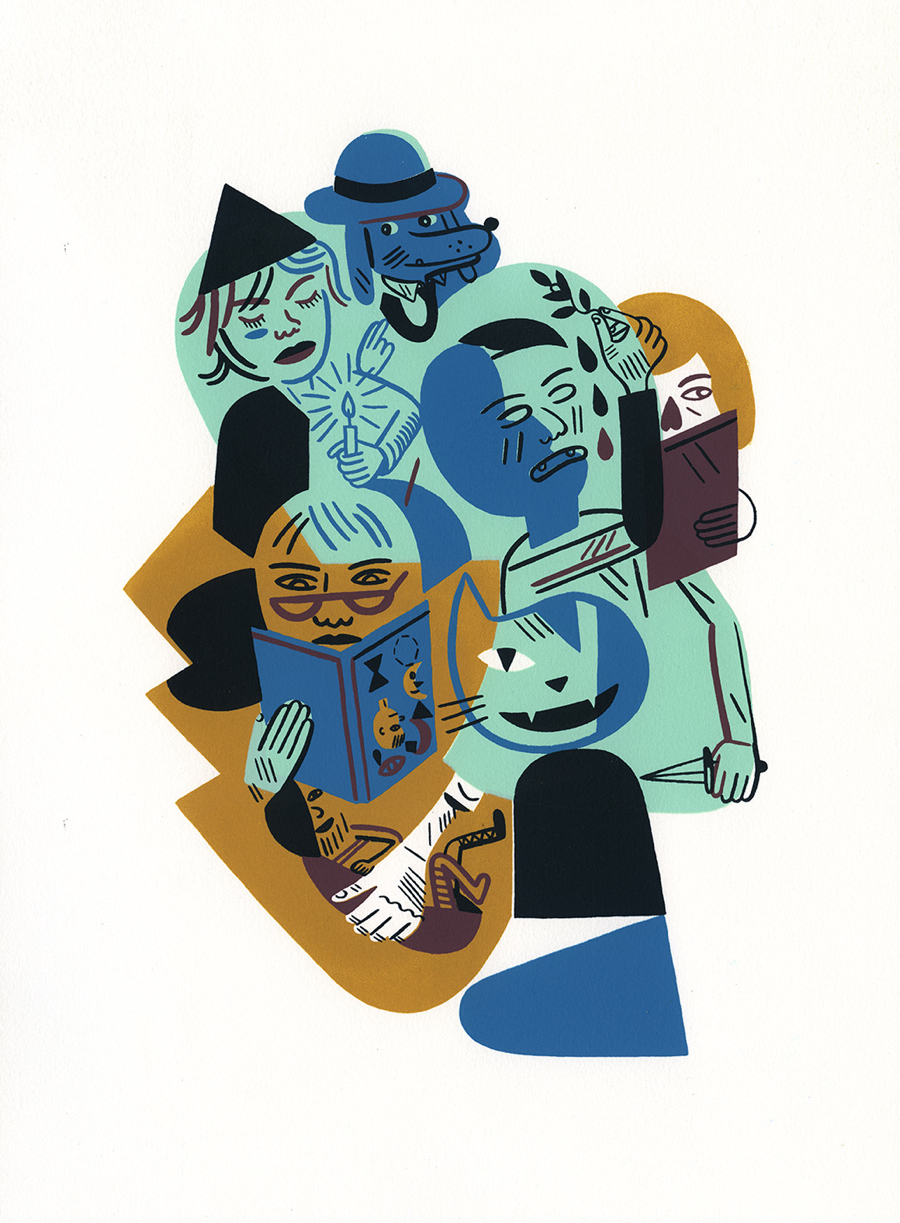 *Offered to you 100% artist made and distributed.

For international shipping please send via paypal an extra $10 to: info(at)jasonjagel(dot)com*”

By purchasing this print that measures 11×15, not only do we get the opportunity to obtain a small slice of a very talented artist’s vision, but in doing so help support a very creative cat in continuing to make art.

But in the long run, we can look at it as an investment, because at some point, Jason will be dead, and we can sell it for an exorbitant price, the money from which can fund all manner of whimsey.

Maybe even a new pair of hands.

9 Responses to “Difficult to type with my elbows.”