One of my favorite things about getting back to real life after the Interbike Trade Show of Bikecycles and Bikecycle stuff, is not being there anymore. 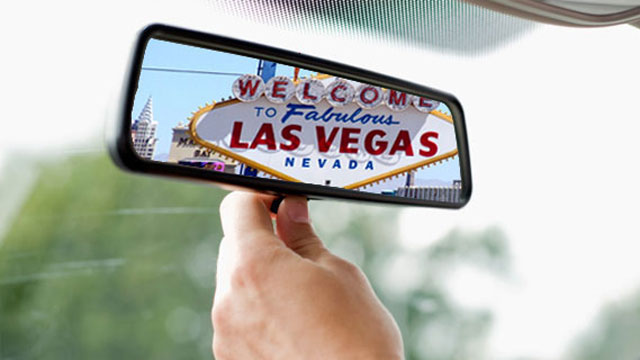 It’s such a bizarre place, even the reflections there don’t make sense.

Of course getting back to real life means things like cleaning the actual dust from both my home and the proverbial dust from my soul. Second to that, there’s filling orders that kind folks have placed in the All Hail The Black Market, Market, but most importantly doing the thing that we all tend to do when not standing around bla blaing at one another in a climate controlled megapolis.

That thing of course being riding bikes.

I’d only been on my home turf for a matter of hours when Robert Ives and Friendly Paul hatched a plan for a two wheeled adventure in the idyllic environs of Marin County, for which I was well beyond mentally prepared for. The day was crisp, yet sunny, and I looked forward with quiet anticipation to riding bikes with friends, after spending an overwhelming majority of the last several months riding alone.

We met up at Paul’s house, and made our way up and through and around and back over the birth place of mountain biking, Mount Tamalpais where I took some photos of them, minus the tops of their heads; 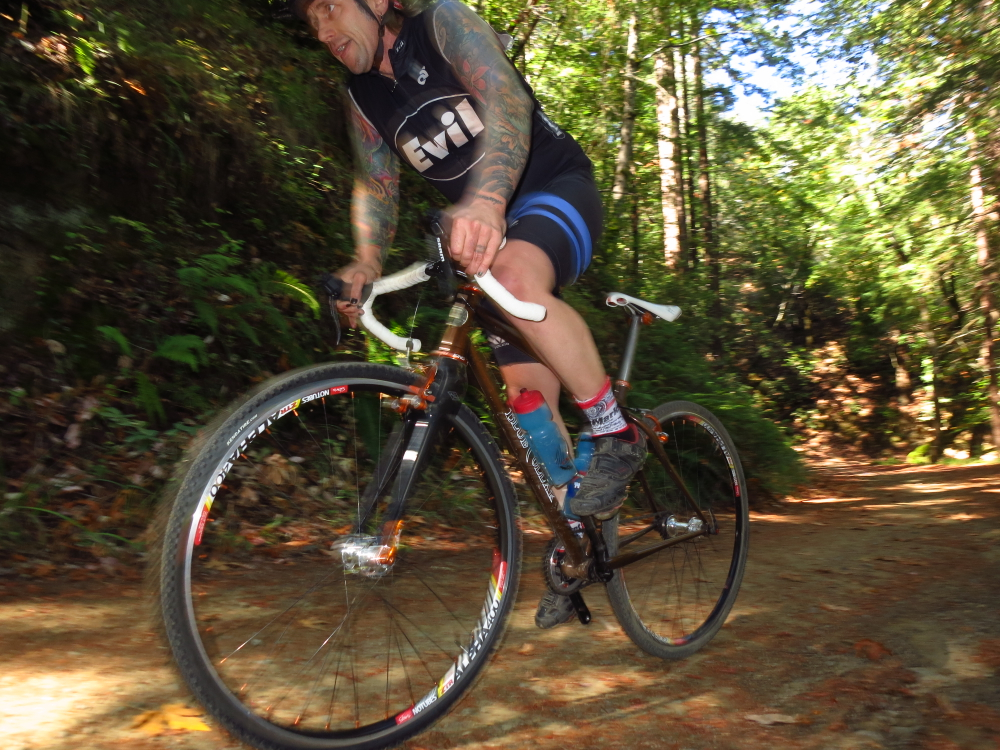 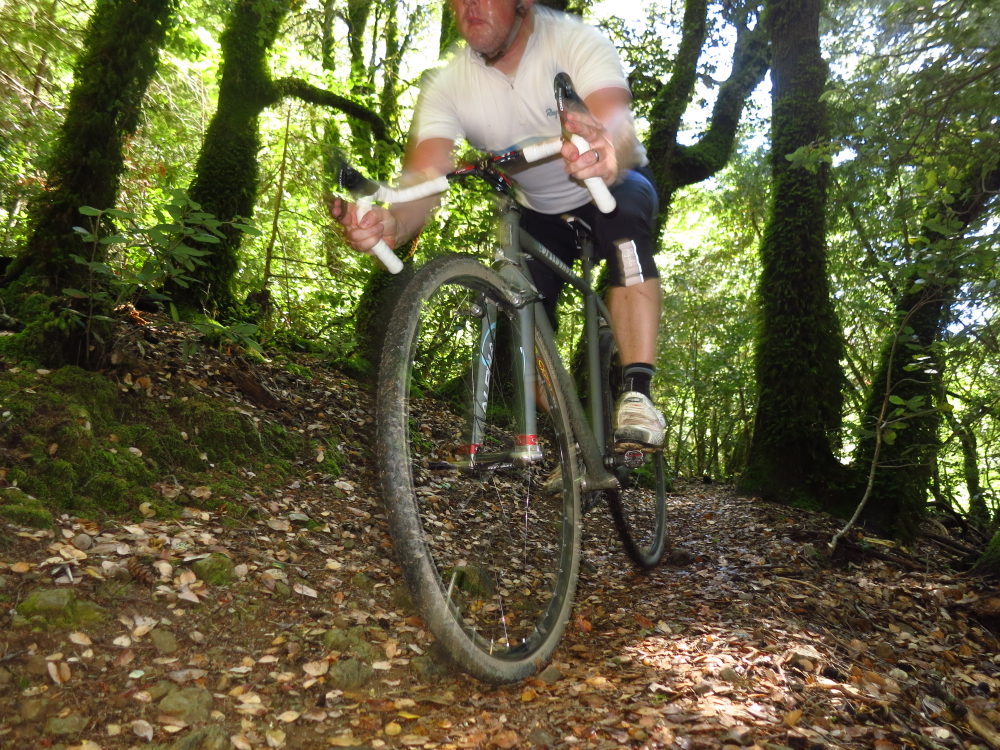 You know… Cause that’s kinda my thing.

Eventually, after many years of not seeing much of him at all, we randomly crossed paths with this guy; 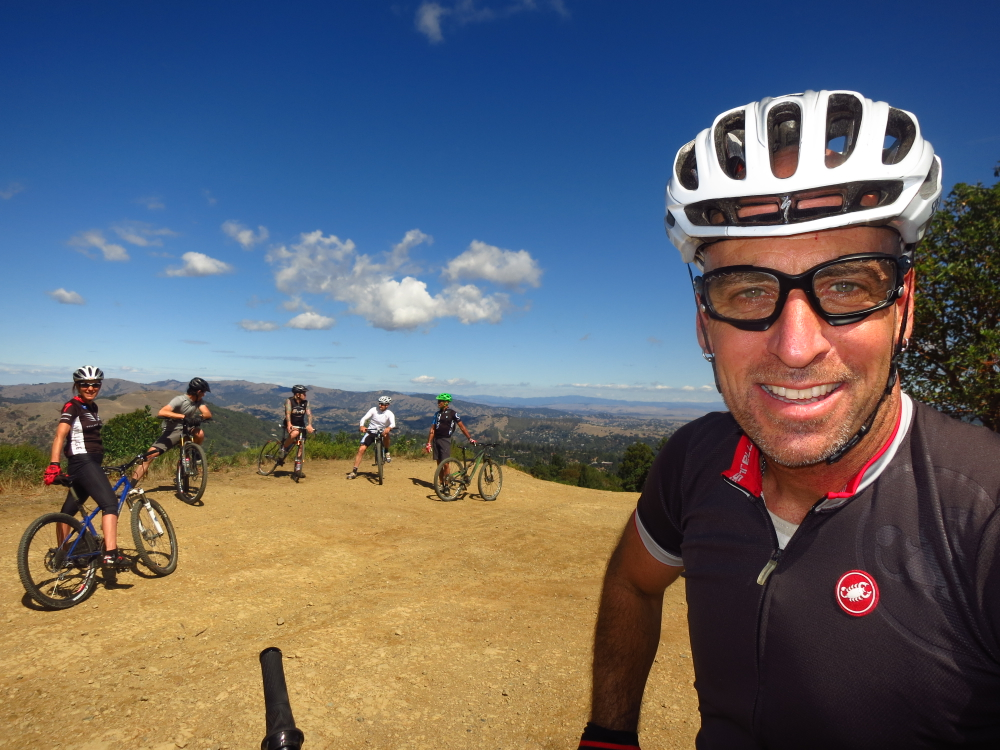 I swear… They’ll let absolutely anyone onto the mountain.

Anyway, suffice to say, it was horrible; 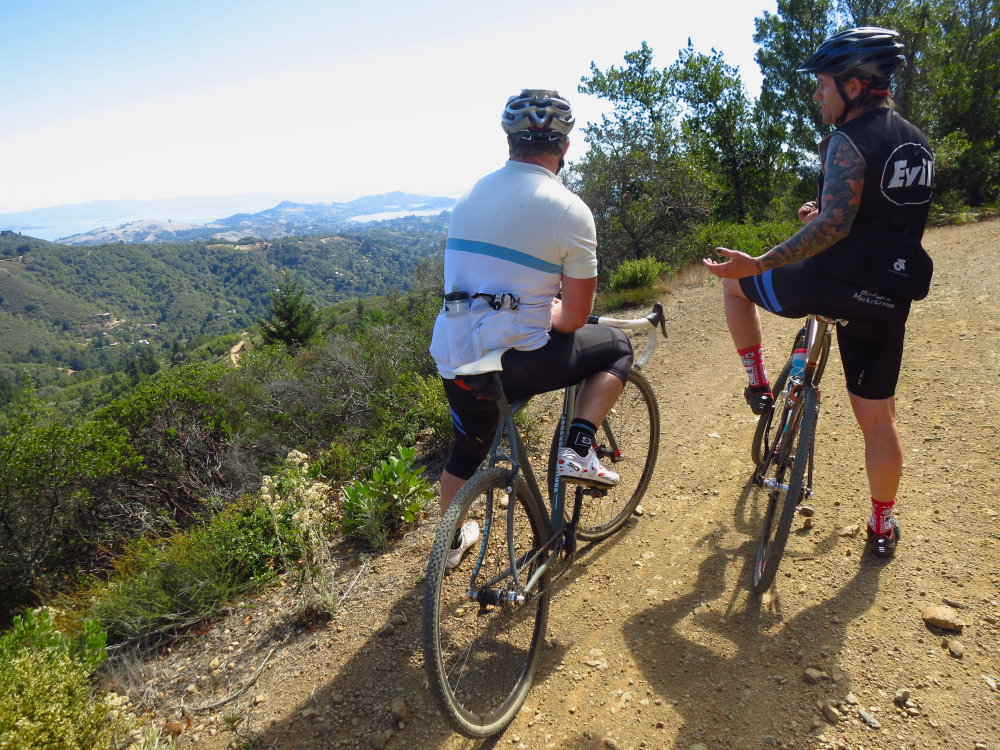 I would also like to note that here in the heart of false entitlement, and where hikers and cyclists rarely see eye to eye, our day was spent enjoying friendly greetings from at least 95% of our fellow trail users.

The rare individuals who were not so inclined to say hello, or acknowledge us in any way were in fact other cyclists, but they were probably in the process of beating somebody’s Strava times or something, so obviously a pass should be given.

Finally at the conclusion of our time together we solved the remaining problems of the world, falling face first into a feast of pizza and beer, and the heavens smiled upon us.

I could get used to that sort of thing.

And speaking of friends, and as much as I love mine, and vice versa, I now realize that none of them love me as much as this guy’s do;

P.S. The keys to my house are in a wooden box next to the yucca plant.

Anyway, while we were riding bikes, (or more specifically, during the previous week, standing around talking about them), a number of folks made contact regarding some form or facet of them which I will get into now.

Brian came through with an updated flyer concerning a throw down this coming Thursday at San Francisco’s own 111 Minna Gallery where people will be taking photos of themselves looking at photos of themselves racing cyclocrosscycles and then posting those photos on Facebook; 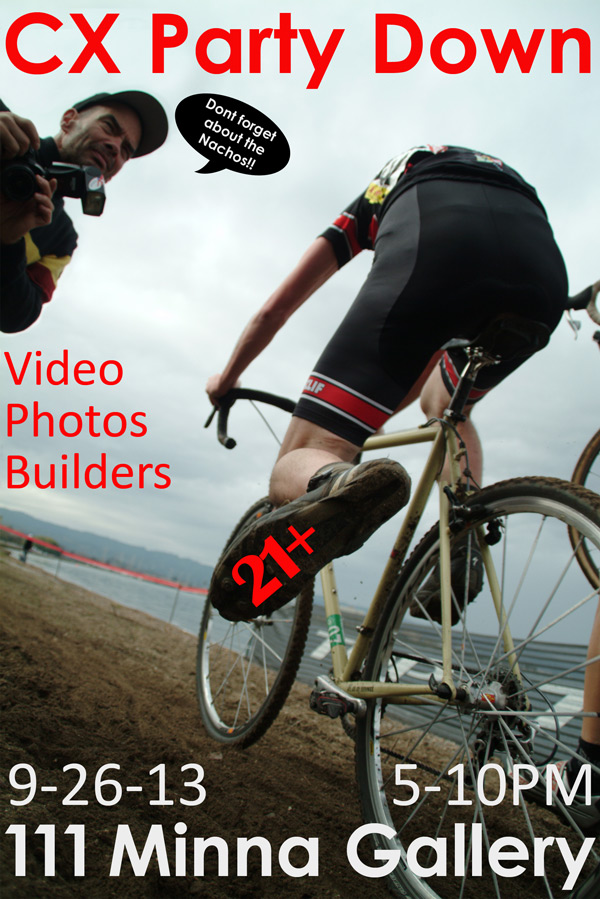 It will be all very postmodern.

And certainly one who knows a thing or two about Postmodernism, from all the way out in New England, Chip sent an email which went something like this;

“A quick update from the Zanconato SSCX Series. Thank you for your support in the first month of the series! The first 3 races were fantastic. Great racing, great weather and great venues; 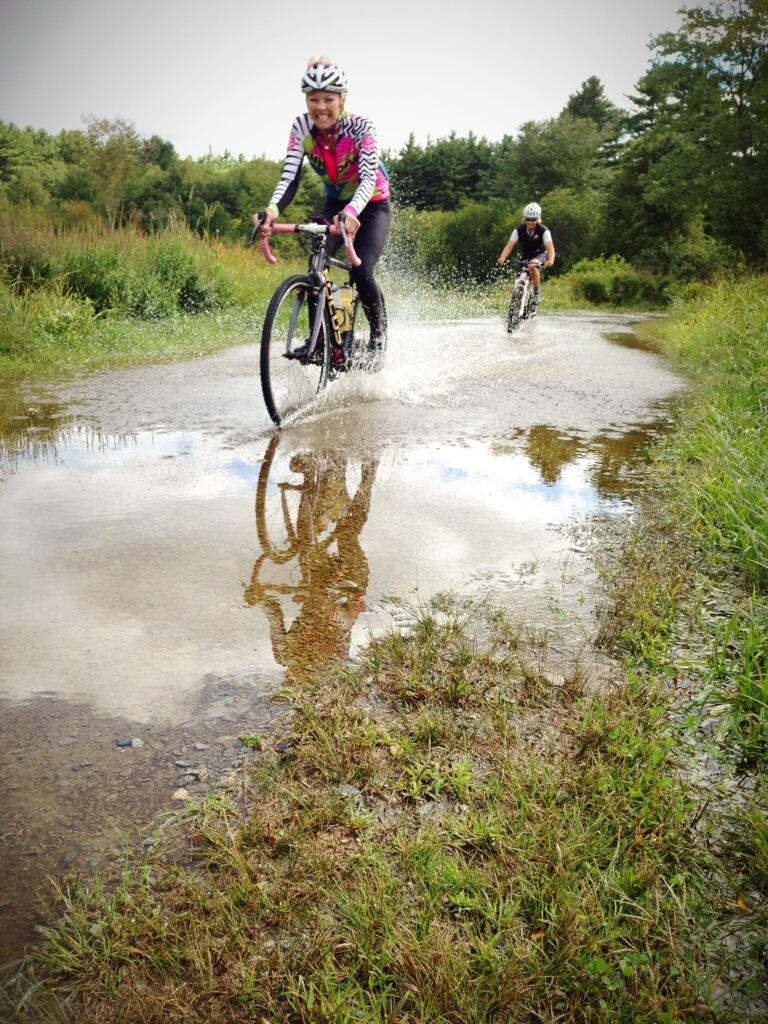 This image isn’t from the aforementioned series, but I liked it so I used it as visual fodder, because an informal survey says 79% of all people who come here like photos with their reading material.

The next couple of months are really going to heat up. We are on the big stage at Providence! It will be great to show off SSCX on such hallowed ground as Providence. I hope you all can join us for the racing or the after party at the Builders Ball on Friday night.

Cheers and thank you!”

The road to Philly is paved with broken glass and shattered dreams. Chip’s making sure of this.

In news of things that make you stand on your desk and scream “THIS IS TOTAL BULLSHIT”, I came across this little number straight out of New Hampshire about twenty year old unlicensed driver Darriean Hess hiting four, and killing two cyclists after being pulled over eight hours earlier for speeding; 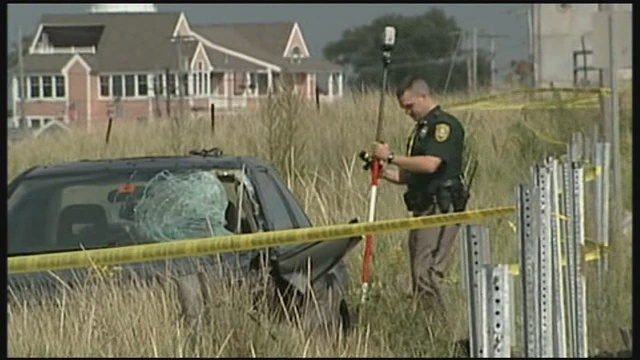 At the time that I’m writing this, no charges had been filed, and comment threads had already been filled with people noting that cyclists have no rights to the road because they pay no ‘fuel tax’.

I swear to god some days I want off this ride so badly I can taste it.

In happier news, though not relating to bikes at all, with the exception of they’re from people ride them, from Nat the ex-pat I received a brand new slice of art that sucks so much, it actually kinda doesn’t with the Museum Of Bad art; 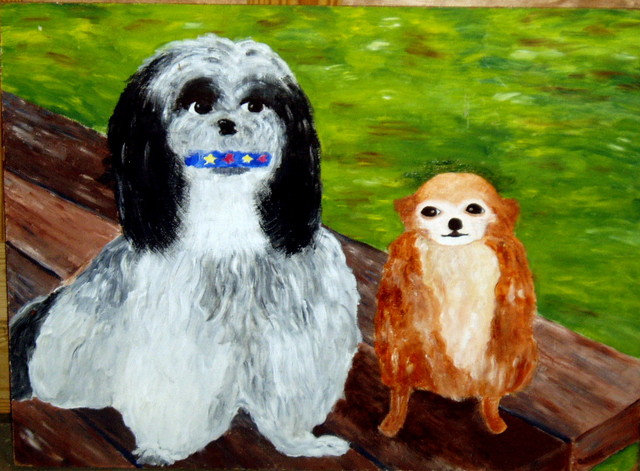 I hate to love it.

Relating to that in a curious kind of way, at nearly the exact same time, Morgan sent a link of unintentional art that doesn’t suck so much, it almost does with The World’s Best Ever; 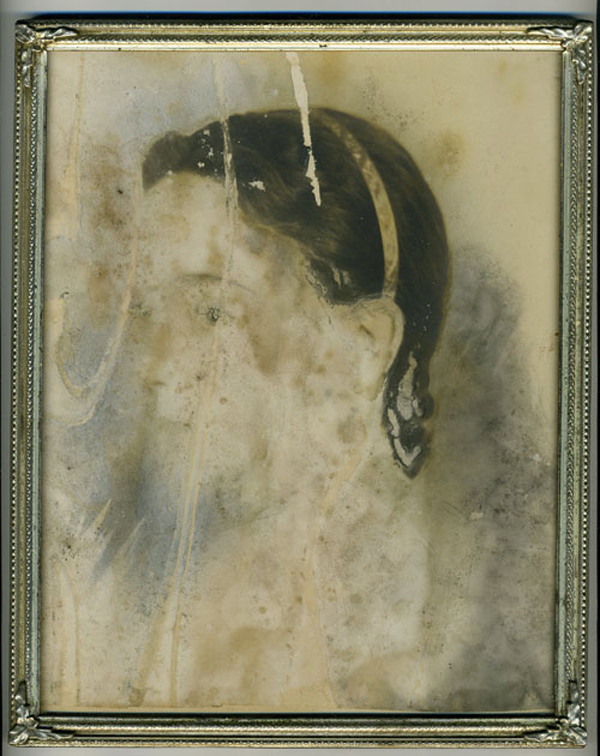 It just goes to further prove that beauty is in the eye of the beholder.

The fact that my dear wife ever agreed to fill that role stands as testament to this.

It’s neither here nor there, but with the exception of a little thing I have brewing in a few weeks, I have no immediate plans to leave this here post for the time being.

The dust has settled, and for the most part, it’s now and will continue to be wiped clean.

6 Responses to “As the dust settles.”