Except positively less creepy than existing in the world with someone who looks identical to you. 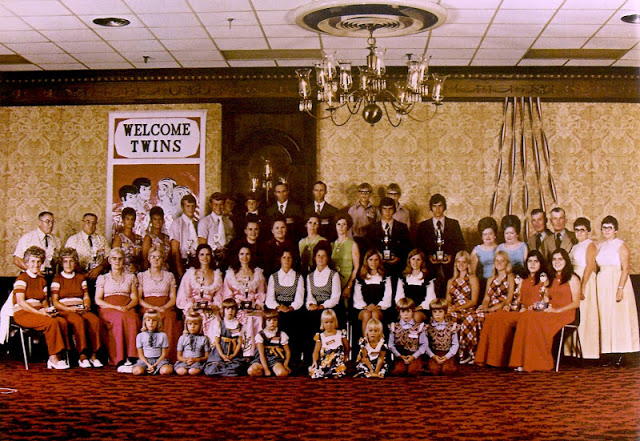 One more push, and I do believe we can get back to having each post be the unique snowflakes that we’ve come to know and tolerate.

We’ll kick things of with a set of flyers for a few upcoming events, the first promoting the imminent rock and roll freakout known as the Underbike Industry Mixer®; 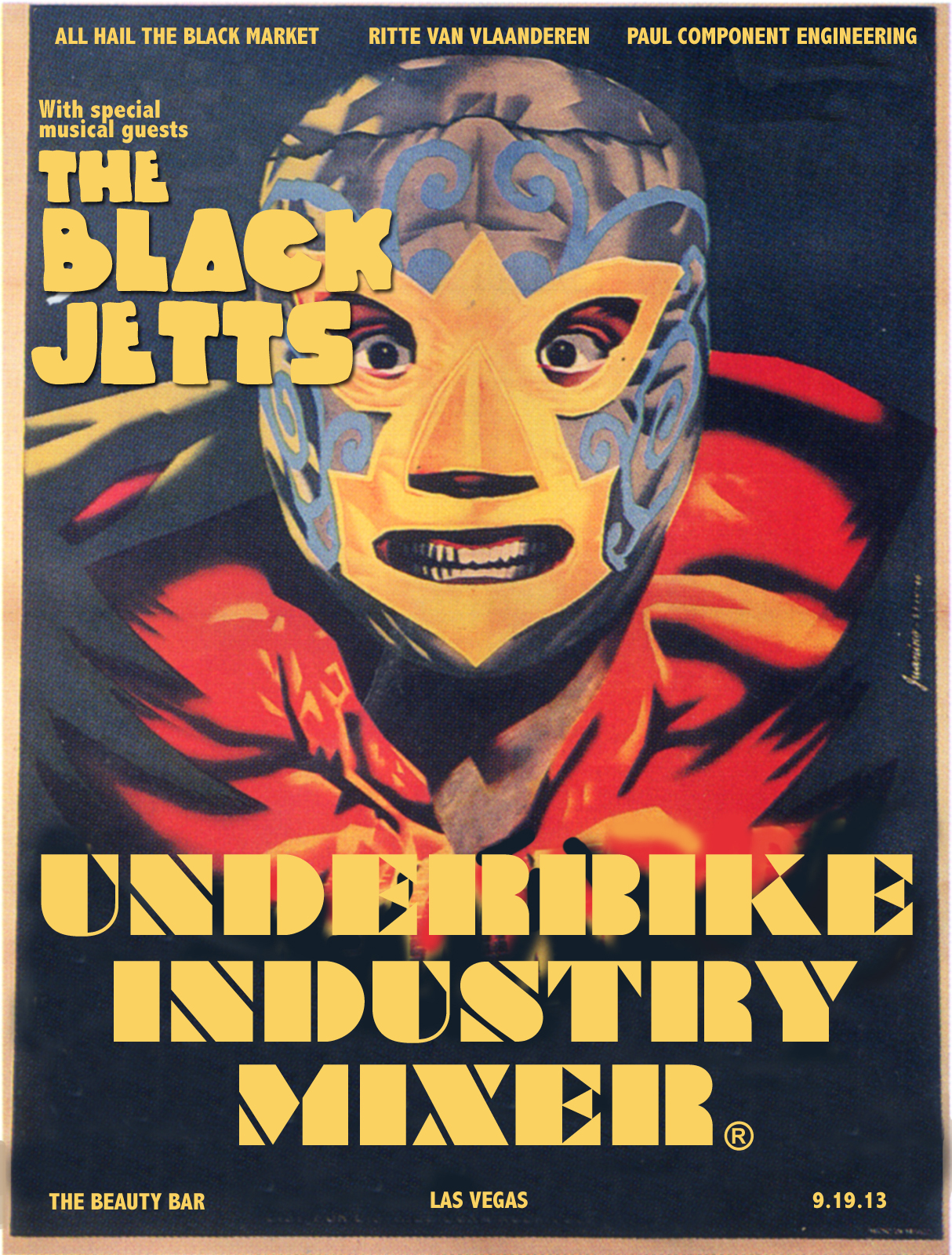 I’ll supply the band and the fuzzy memories, and you supply your own ear plugs, tight pants and lucho libre mask.

If by chance you’ll happen to find yourselves in Las Vegas for either the Underbike party, or the other Interbike thing, please make note that Maximo Supremo residents All City Cycles and Portland Design Works have organized a pre-bash bash at which you can get your brain sufficiently lubed; 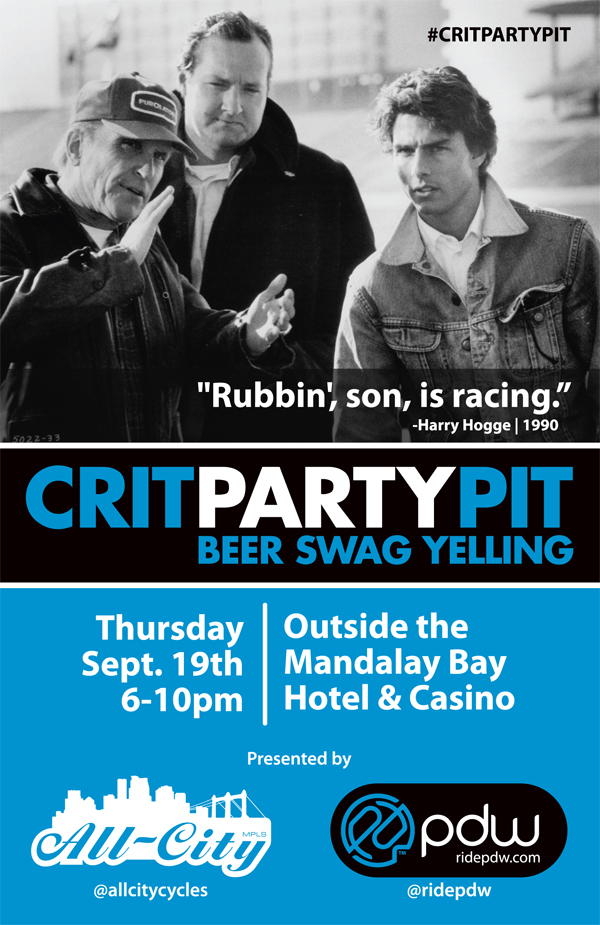 All the beautiful people will be there.

I also have received two flyers for bikecycle racisting competitions which are still a ways off, but if I don’t post them now, I’ll forget and then it will be Christmas time, I’ll be worried about finding my electric turkey carving knife, and by then it will be too late.

From Matt, who clearly is more adept at flyer making than I, I got this one for a cross race happening in Murray, Kentucky in October that’s sponsored by a bunch of good people, one not very good person, and most importantly, Gear Up Cycles; 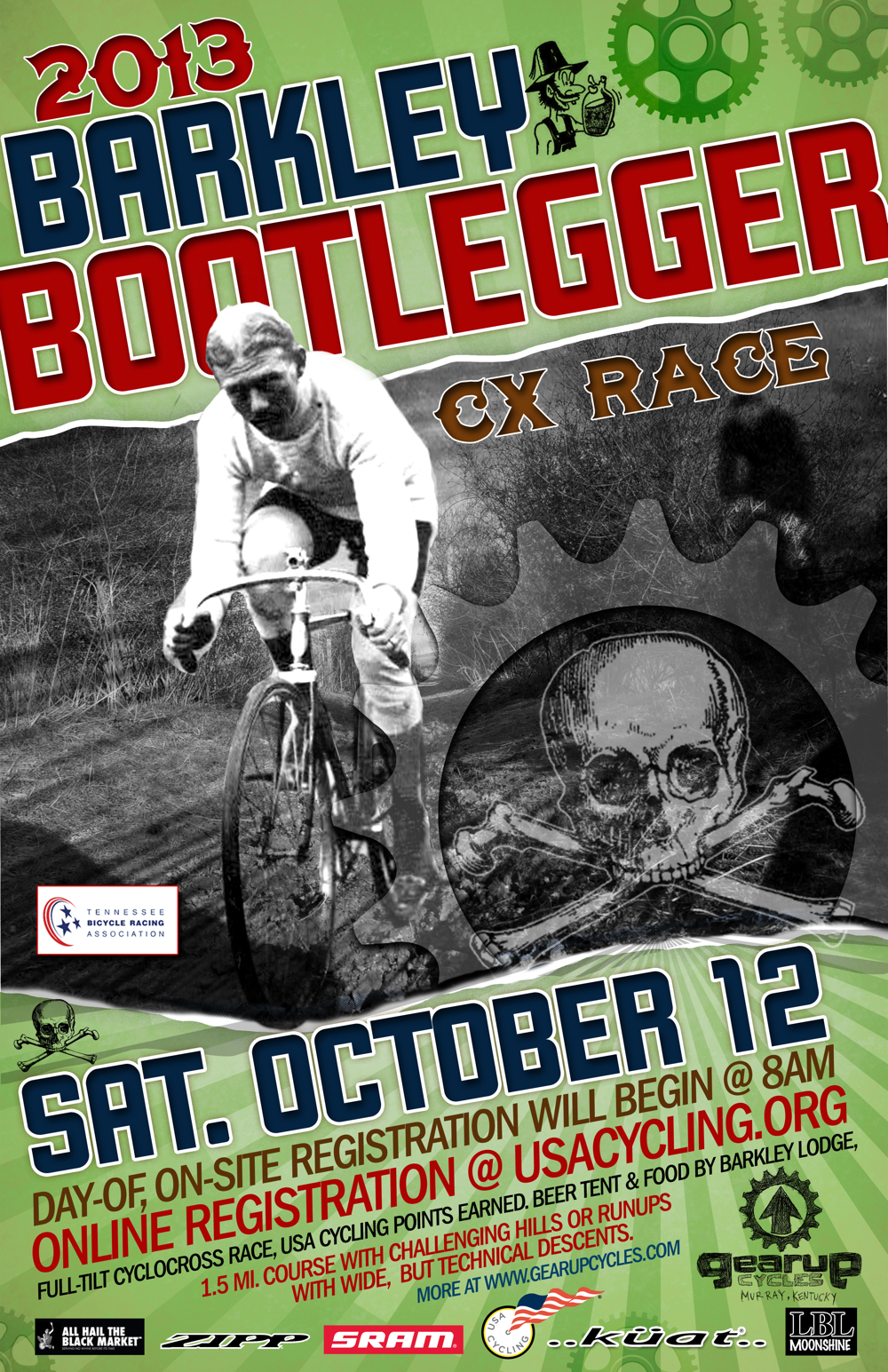 Quality flyers make the race, don’t you know, so based on that, clearly this is going to be a good one.

Then, in less than two weeks time, Charlotte, North Carolina’s Spoke Easy bike shop is putting together another kind of throw down, which Jon made contact regarding, like so;

I have another sweet flyer for your collection. We are doing another Friday the 13th alley cat race this year at The Spoke Easy called Night of the Riding Dead; 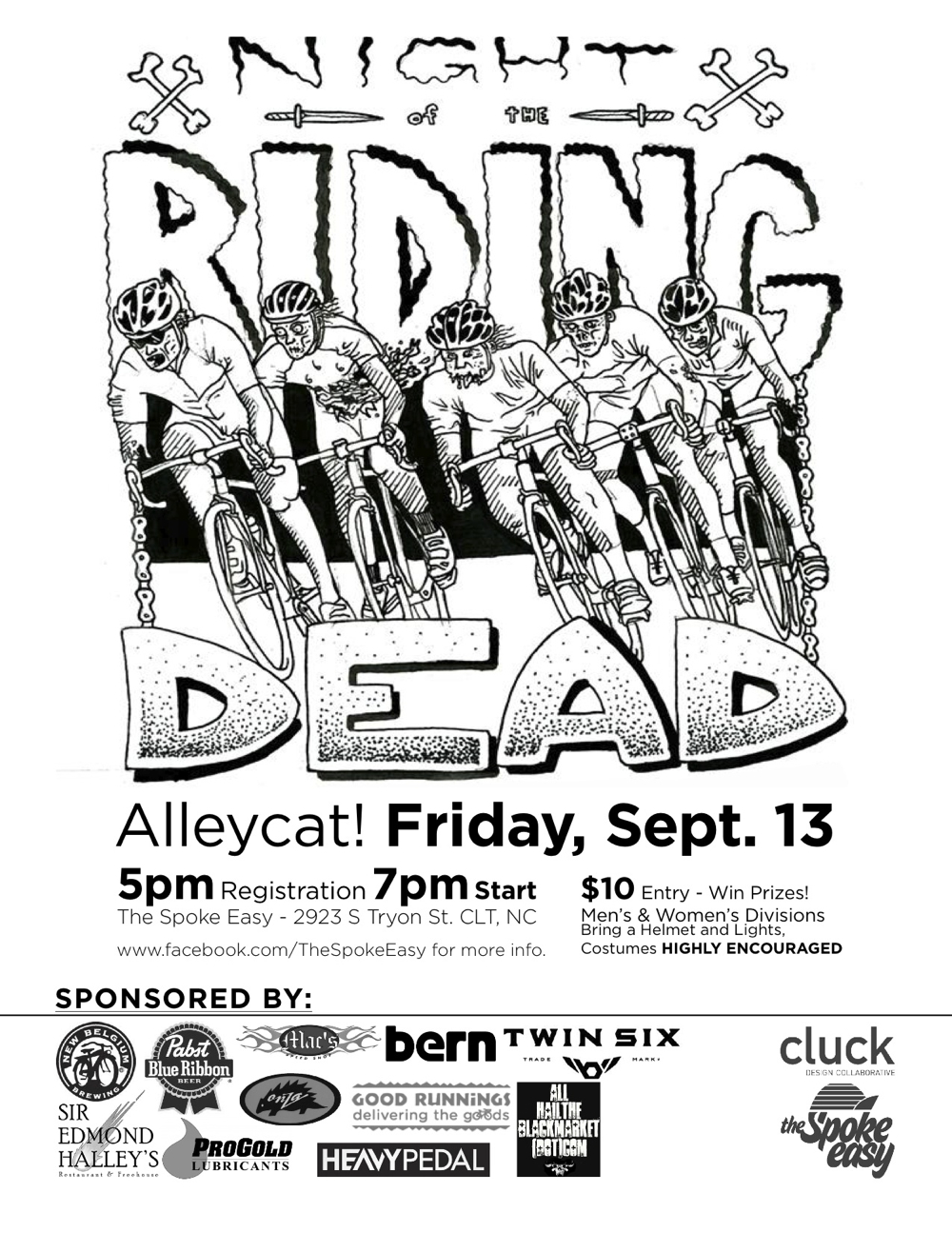 Maybe if you could give us a shout out on your blog or something that would be awesome. We are listing you as a sponsor either way because we love you like our one uncle that drives the ’76 Firebird and wears button up sleeveless denim shirts that mom doesn’t want us around because he’s a bouncer at the titty bar and he always smells like stale Schlitz.

We also have another race/two year anniversary party coming up in November, and once we get the artwork together for that flyer I’ll send it our way as well.

‘That one uncle that drives the ’76 Firebird and wears button up sleeveless denim shirts that mom doesn’t want us around because he’s a bouncer at the titty bar and he always smells like stale Schlitz?’ you say?

I dare to dream.

Not having much to do with any of the above, but kinda, while scanning the web recently, I stumbled across the following bit relating to a lady specific bit of bike clothing.

Typically I tend to steer the hell away from any Kick Starter anything, but because I’ve completely thrown up the white flag in defeat regarding keeping women out of cycling, I figured I’d do the right thing and give it some traction here;

All hail The Urbanist;

Personally, I don’t care for wearing pants at all, but just the same, I’m curious how these would feel.

Second and most importantly to that, after all of these years lurking around the bike industry, I think it’s better than a good thing that women like Ms. Guzman are taking the bull by the horns and fulfilling a need that is clear to them, as opposed to waiting for men to make an attempt and ultimately screw it up.

Lastly, and only if you can find a connection between girl pants and what might cause one to fire a pile into their own, photographer of the stars Mr. Bob Croslin turned me on to the following clip, informally entitled, ‘today was just not your day, chump‘.

At that point, I would drop my car keys on the ground, and wander into the woods, never to be heard of again.

As I take my leave of you, I’ll leave you with one final thought from Cary; 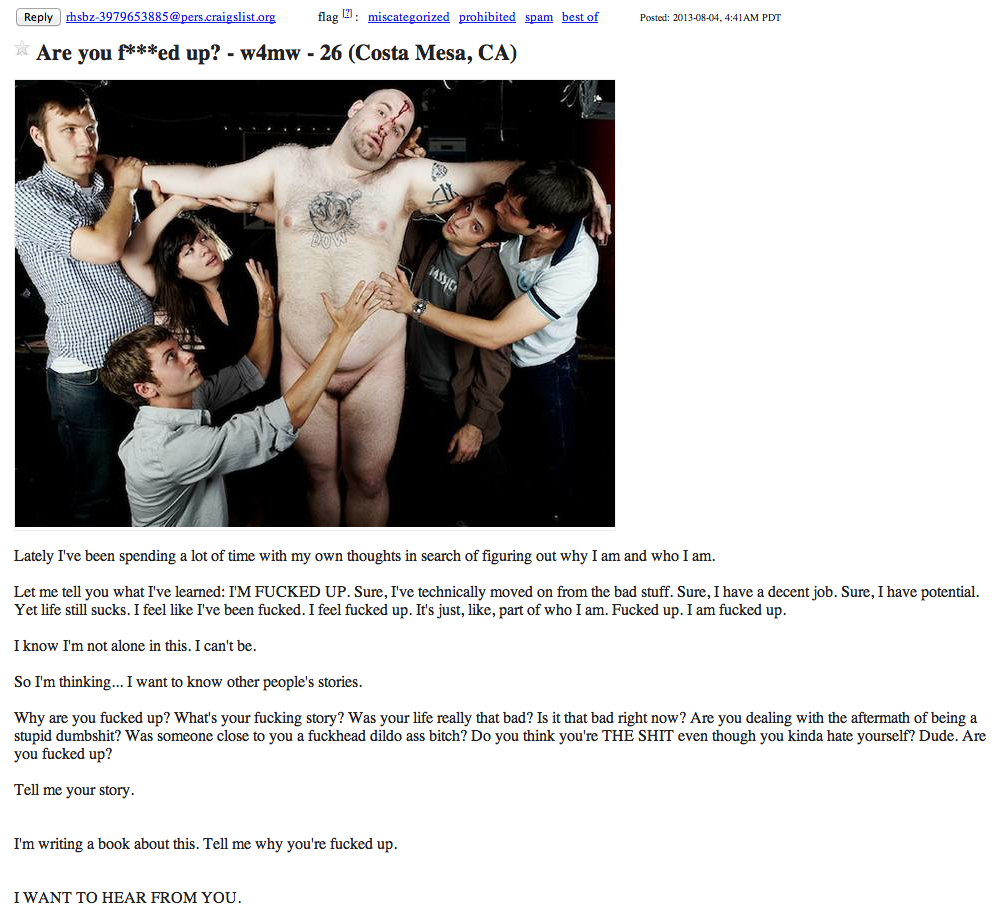 Maybe the next shirt should say something like ‘I’m not fucked up, but my twin is.‘

5 Responses to “More of the same, but different.”