On Friday I mentioned that the likelihood of there not being a post available today was better than fair due to the fact that William from the band O Zorn! was coming to town, and with our short history together serving as a guide, I wagered that I’d be in no condition to think, or type, or open my eyes, or get off the floor.

This was only true for some of our time together, but before we get to the end, we’ll discuss the beginning, which starts last December with the announcement that Rocket From The Crypt would be coming to play their particular brand of rock and roll in San Francisco (which by the way is Spanish for ‘streets of bum poo‘).

“Stevil“, the call from Bill may have started. “Rocket’s playing in March. I’m gonna come up and stay at your house.”

And so it was done. Fast forward four months and the date was nearly upon us. Bill hopped in the passenger seat of my truck in front of Oakland International Airport, and from there we made a b-line straight to Drunkingham with a momentary stop through the idyllic burgh Benderville, but not before getting the impending shitshow immortalized at my local tattoo shop; 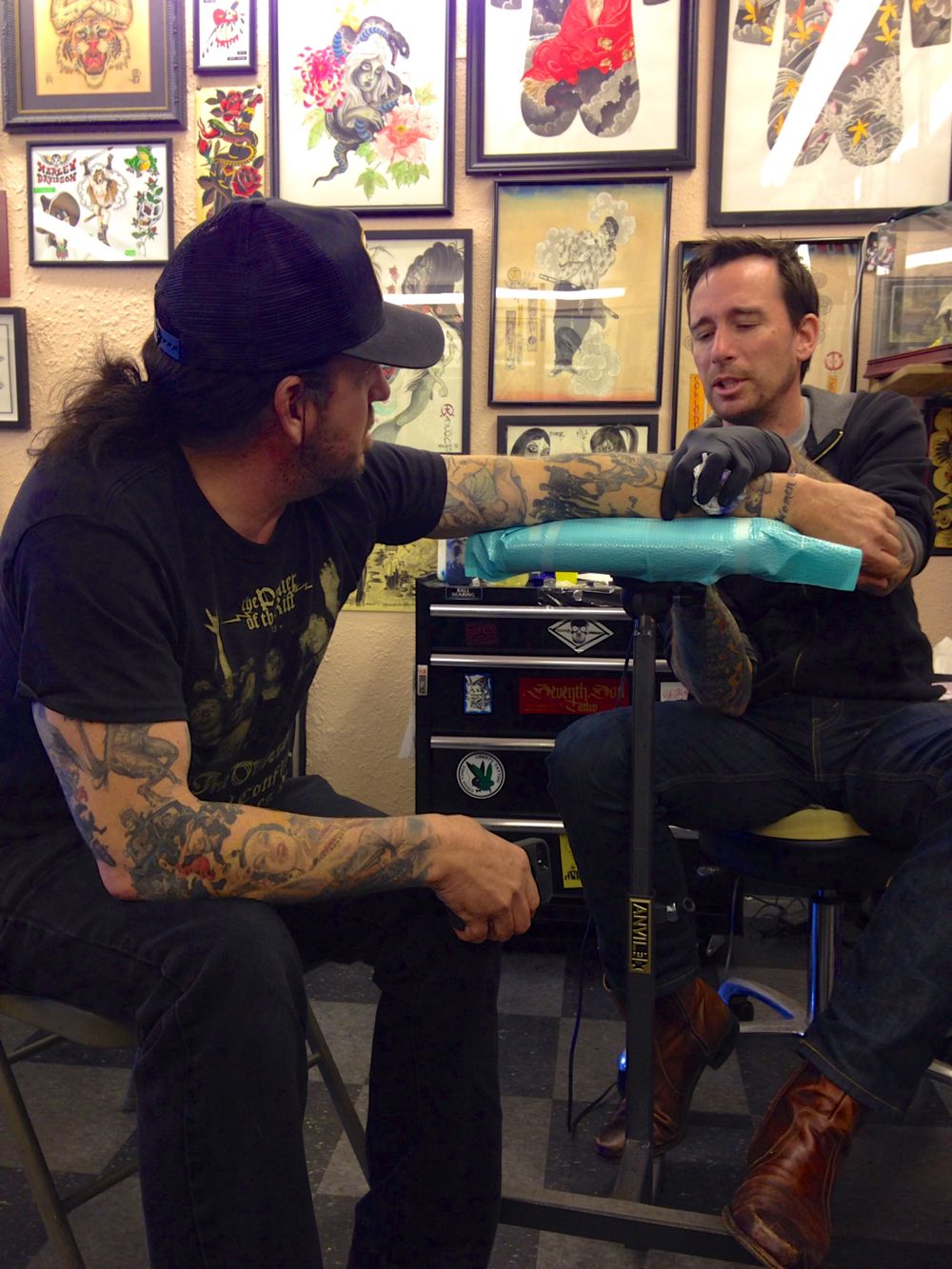 After his first night in town, we may have both second guessed our decision to see this trip through, but with the addition of my life partner into the mix, the lethal concoction of gas, fire and intent was complete. From that point, there was nothing any of us could do but hang on.

D-day was upon us, and after booking a hotel room to call home for at least a few fitful hours of sleep, we made our way to the city by the Bay.

Drinks were poured, snacks were eaten, and we finally headed to the venue.

Opening for Rocket was Swami recording artist and Birmingham’s favorite son, Dan Sartain. He karate chopped straight through his set to a packed house, but at its conclusion, the house only got more packeder in anticipation of San Diego’s greatest export; 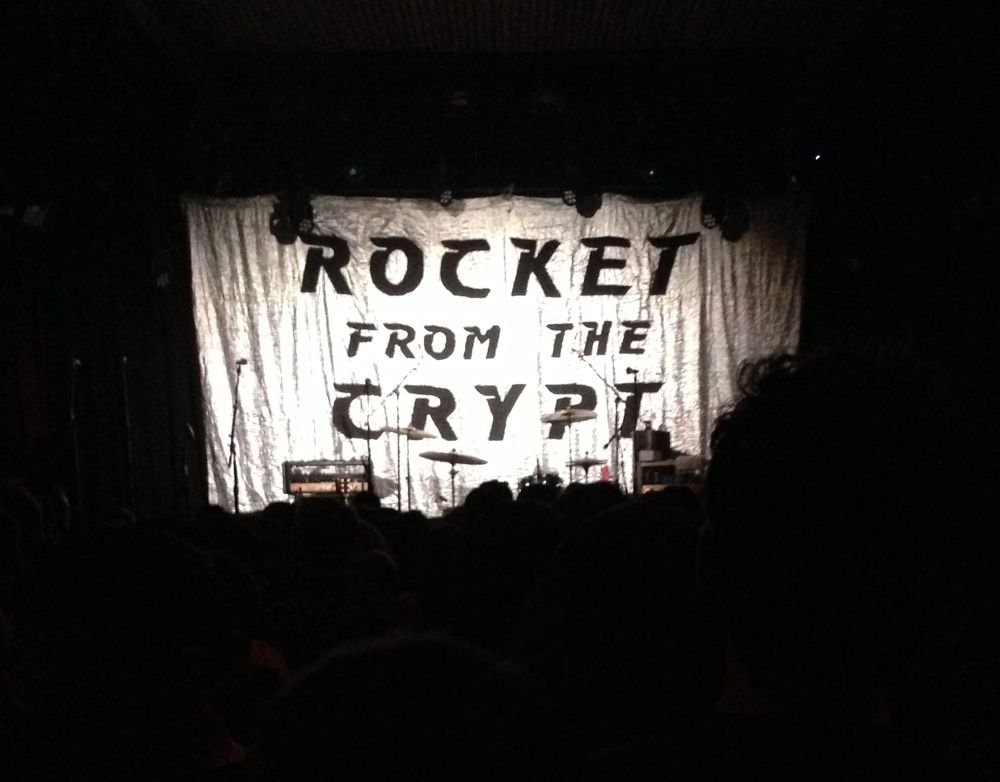 Photo courtesy of DeMonika.
For the following ninety minutes (give or take), and six to ten beers, we shook our asses to the point of causing an earthquake several hundred miles south.

Ordinarily I have the unique knack of drawing the largest people in the room to the space right in front of me giving me a perfect view of their backs, but at this show, I felt the tide turning as the fellow just to my laterally forward right was 6’3″ and probably 250, and his buddy who was standing behind him weighed about twenty pounds more and was eight inches taller.

We became fast friends, and they provided me a solid back up should the need arise.

Luckily it did not, and we sweated the evening away; 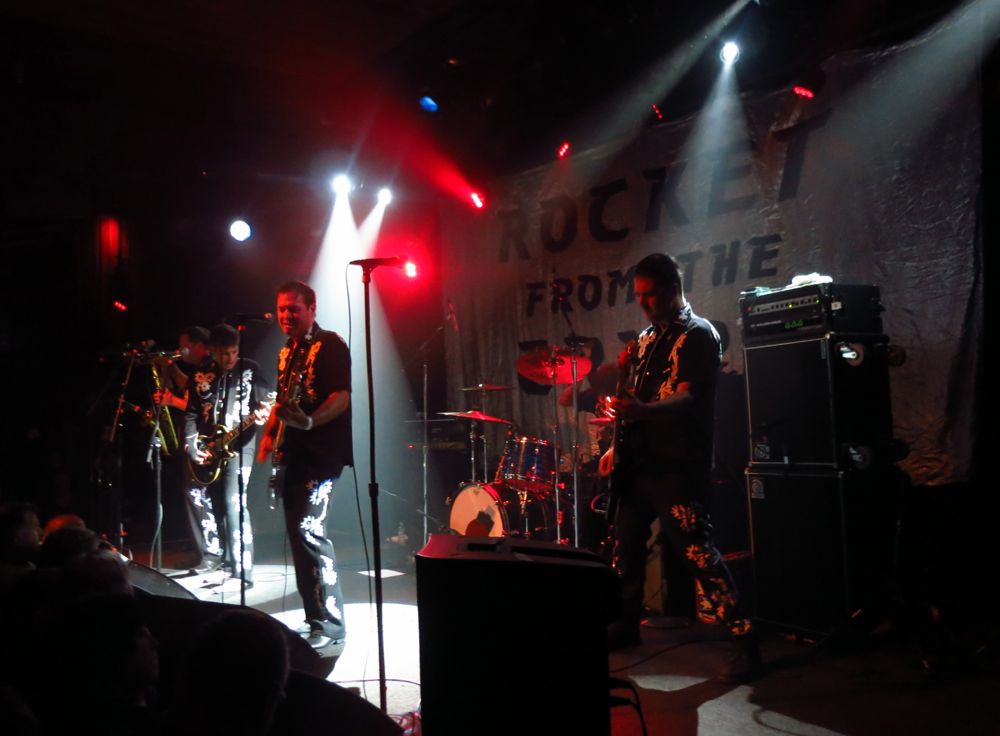 At the show’s conclusion, and after two solid encores, we met up with a group of our friends who were there representing Santa Cruz Bicycles, and we dribbled across the street where we posted up along side an army of degenerates, and ultimately closed down the bar.

At some point my brain stopped recording but I do remember speaking with an attractive young light skinned black woman who I believe asked me “dojuknowheIcangetsomecocaine?”

Before I could say “the front of my pants“, she’d turned to find different assistance.

The end of the night was well upon us, as it was turning into beginning of the day, so we beat feet towards our accommodations, which soon provided me a brilliant view of my perfectly broken bride; At this point she’s questioning her decision of putting all of the vodka that was in San Francisco, into herself.

And so it went. We licked our wounds, dodged the rain, and eventually told Bill to get the hell out of our house, and back to Southern California, where he was set to do it all over again that night.

Just like always, we here at AHTBM do the heavy lifting so that you don’t have to.

Of course after two days like this, the last thing one can emotionally handle is a late night text requesting your presence on a mountain bike ride at 7:00 the following morning. Though contradictory to popular belief, the life of a professional blogger is a pretty easy one. Short of tying the sash on my bathrobe into such a tight knot that I couldn’t get out of it, I had no excuses.

So with the lack of sleep and booze saturated soul still a fresh memory, we got out with the sun to show what’s what, what was what; 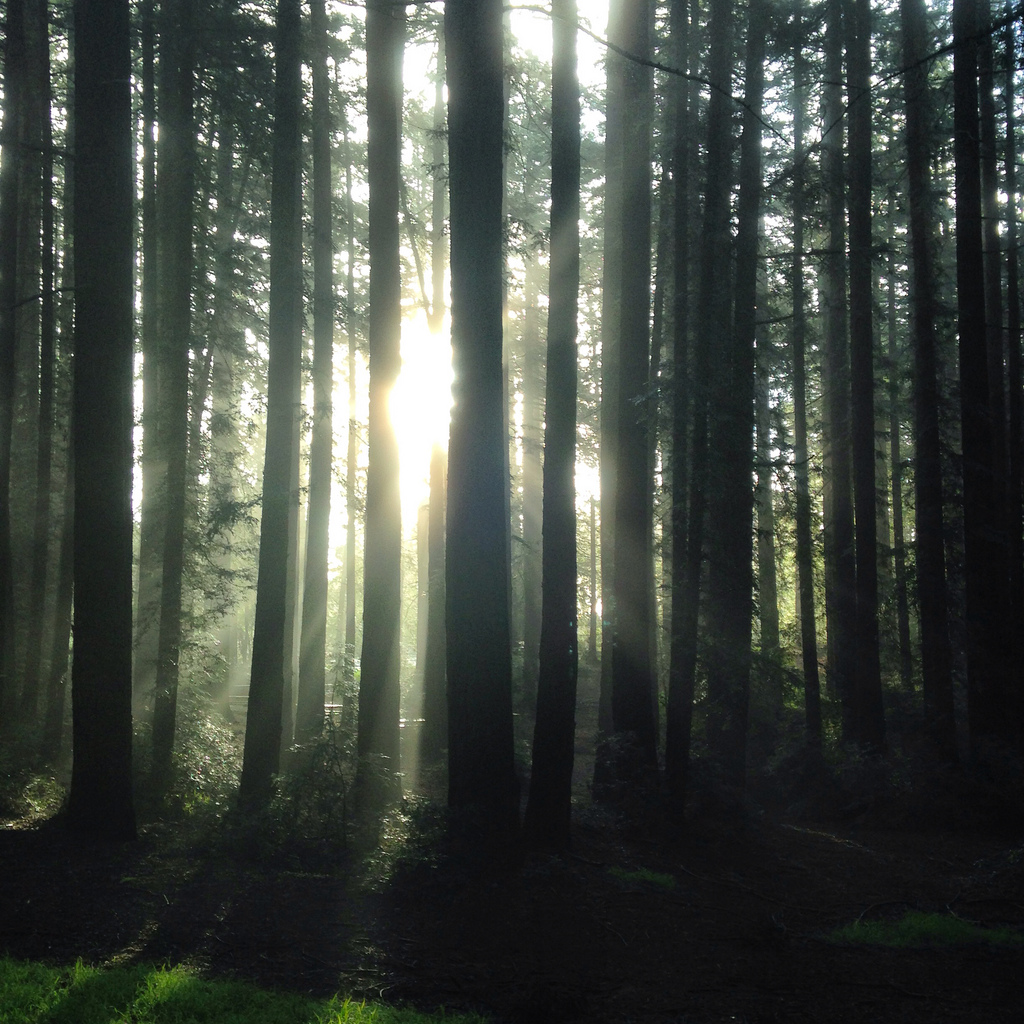 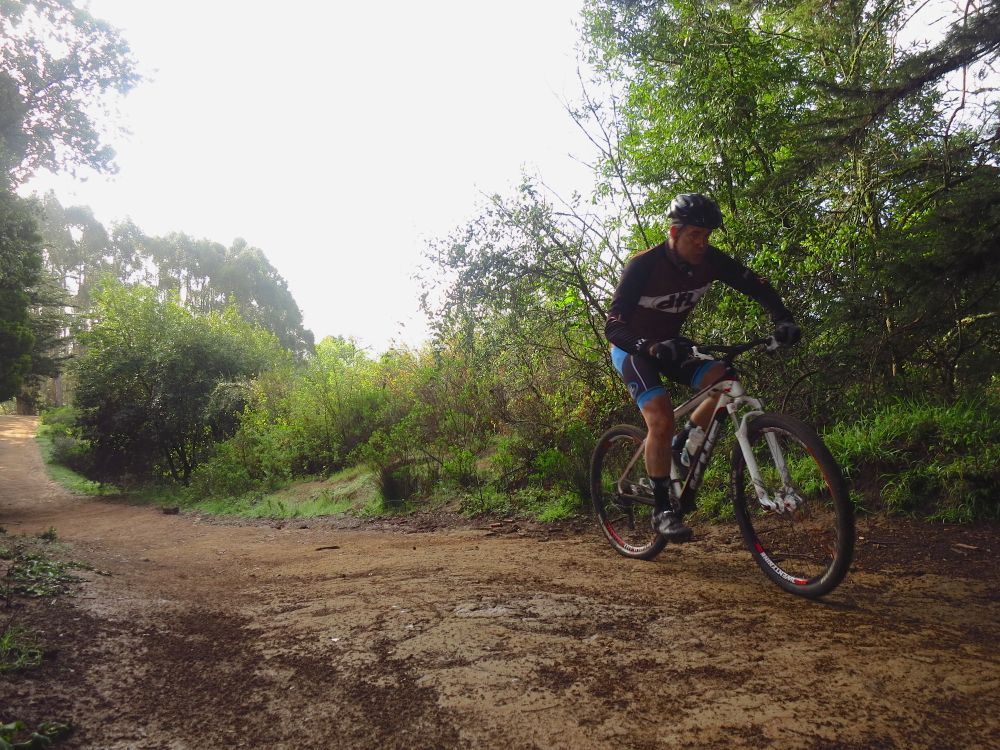 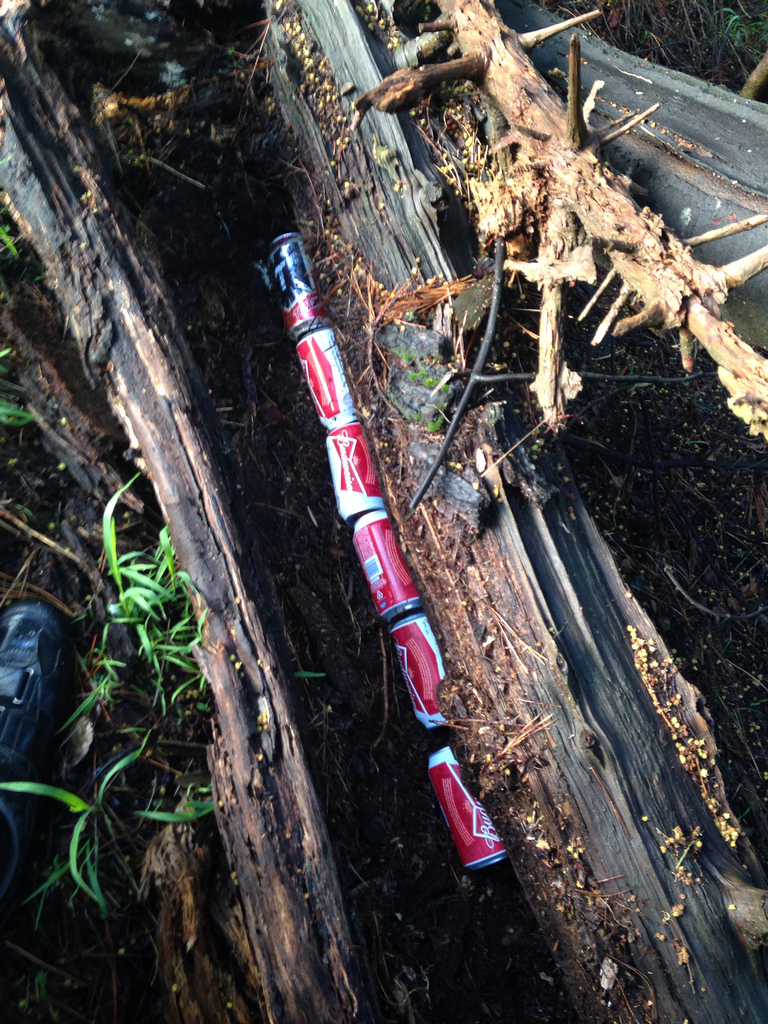 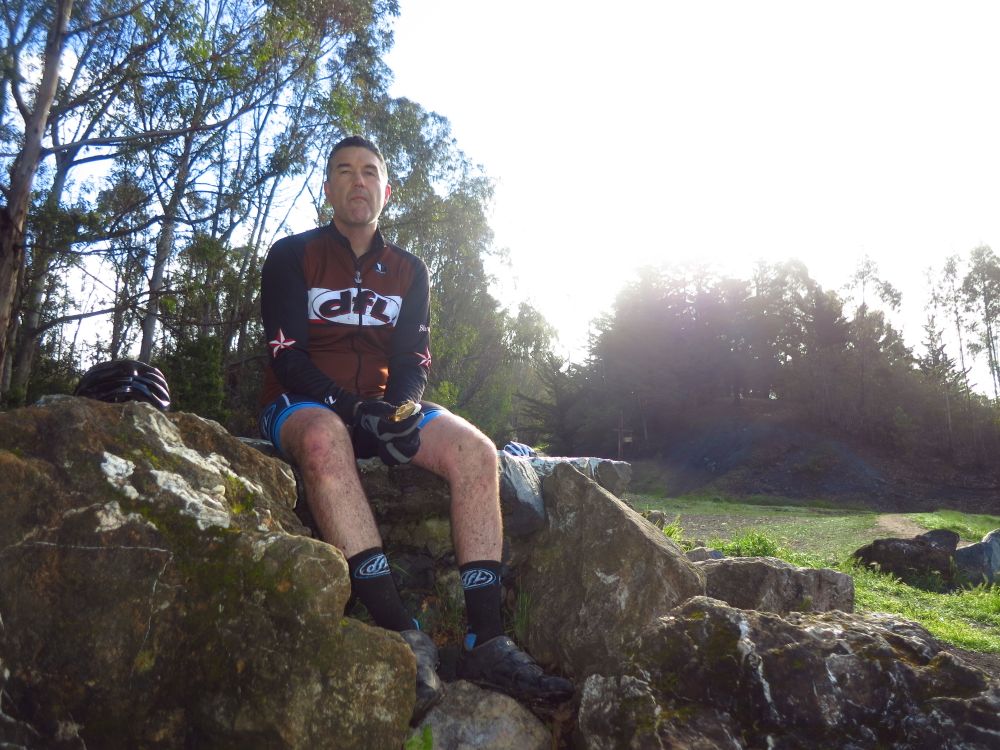 All in all, it was a brilliantly fantastic weekend, and likewise, I hope that each and every one of the three people who will read this post today had the same.

And now as I pull the rip chord on today’s effort, I’d like to take the opportunity to address a bit of pretty damned exciting business. After a number of starts and stops, the good people at Voler Bikecycle Clothing Company came through with the newest edition All Hail The Black Market kits; 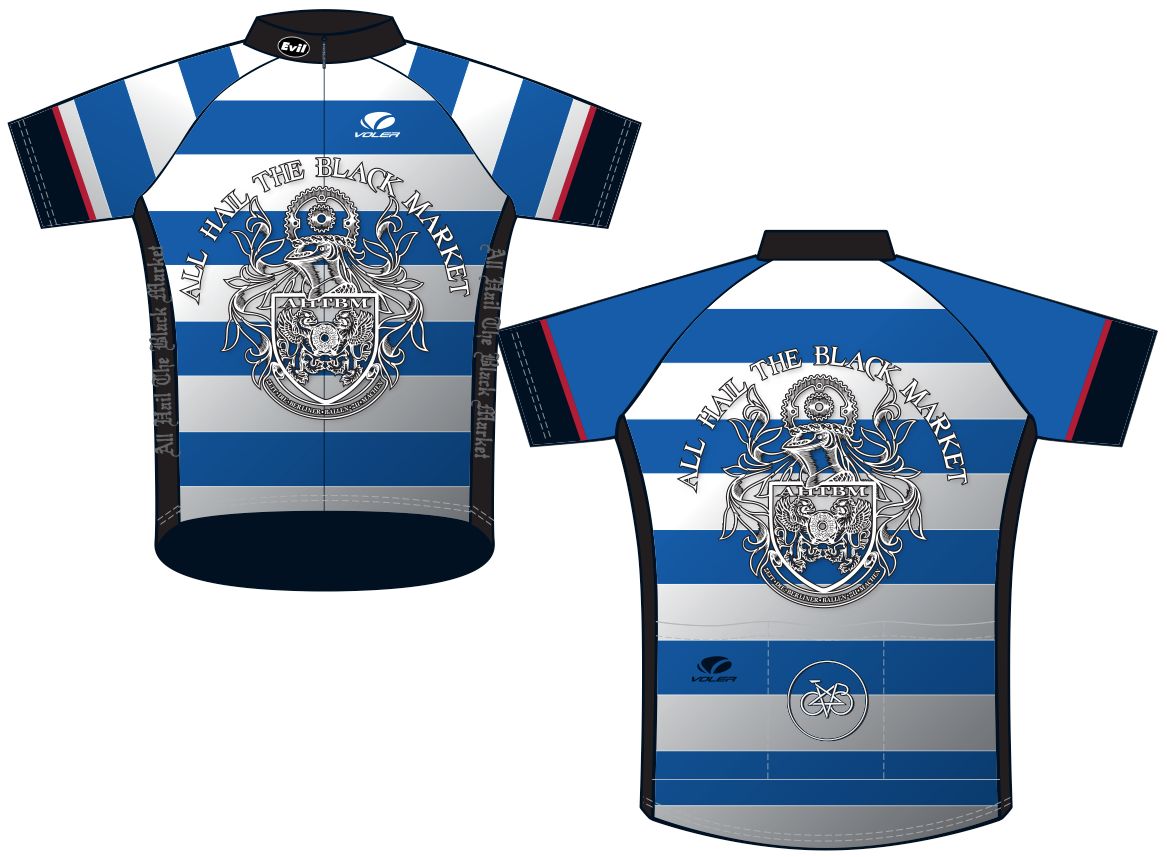 (*I realize the backs of the sleeves are solid blue. This is the initial pdf I received. As proven by the pieces in the store, the stripes go all the way around.)

Once this order window closes in two weeks, it will just be the jerseys, bibs and shorts that will remain available in the partnership program. If you’d like long sleeved jerseys, vests, skinsuits, jackets and so fourth, the time to get on this is NOW.

I can’t describe how excited I am about the new design, right down to the subversive slogan on the inside of the collar (not shown), EVIL oval and Pentabike logo on the back pocket. It looks fast standing still, and despite the stripes being horizontal, is quite slimming.

I will make mention of this every other day until the order window closes.

And until that day, like the opening gif illustrates, a broken record I will remain.