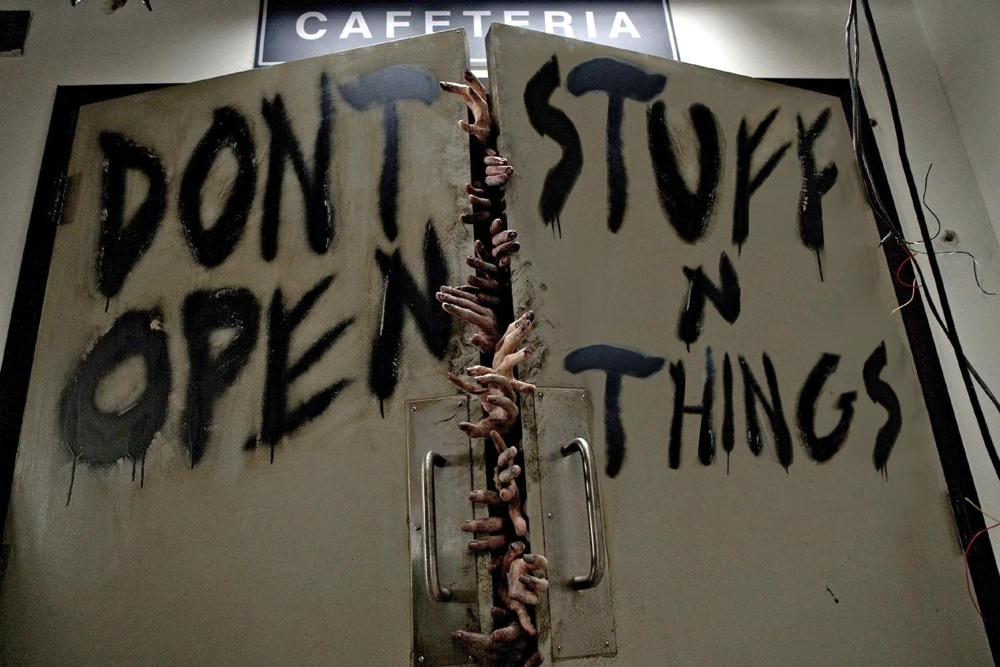 On Friday I posted an array or random visual fodder that’s been collecting dust on my electronic shelf, and I suppose that today I will continue a smidge more of the same, but we’ll see what develops as I hunt and peck and hunt and peck.

It was also on Friday when I came across the news that a woman who hit and killed a teen in Ontario is now suing his family for a million dollars due to “a severe shock to her system as a result of the crash“, and that “her enjoyment of life has been and will be lessened“.

Is this real life?

And just as I buried my face into my hands in disbelief, I came across the following Facebook post by a person named Tremayne A. Higby; 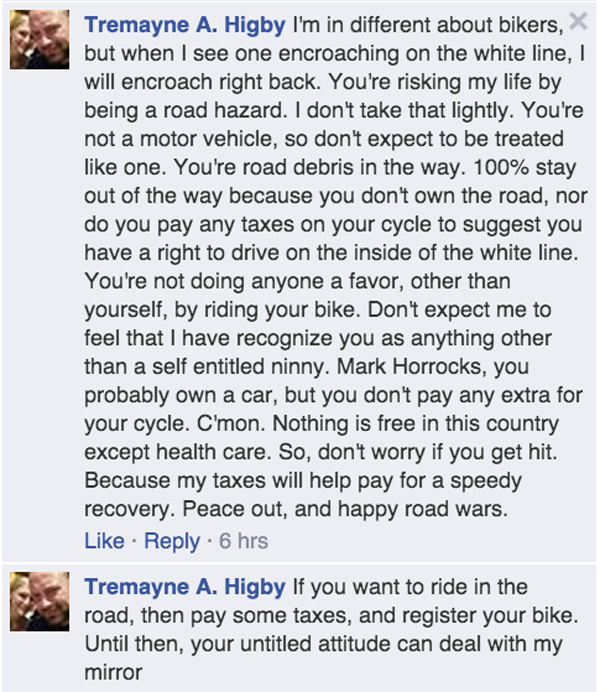 Tremayne’s loose grip of the English language and American health care system aside, naturally I find their perspective repugnant.

Though as with any case involving a motorist hurting or killing a cyclist, Heaven forbid it happens, but chances are better than good that they’ll get off with a few fines and a slap on the hand.

As I concluded in other corners of the AHTBM house in a village, while I find this perspective sickening, I don’t condone organizing a lynch mob here. If contact is to be made, I would just ask that it’s done in a thoughtful manner. Fighting anger and vitriol with the same never ends well.

Thank you for your time and consideration in this matter.

Just remember- What would George do? 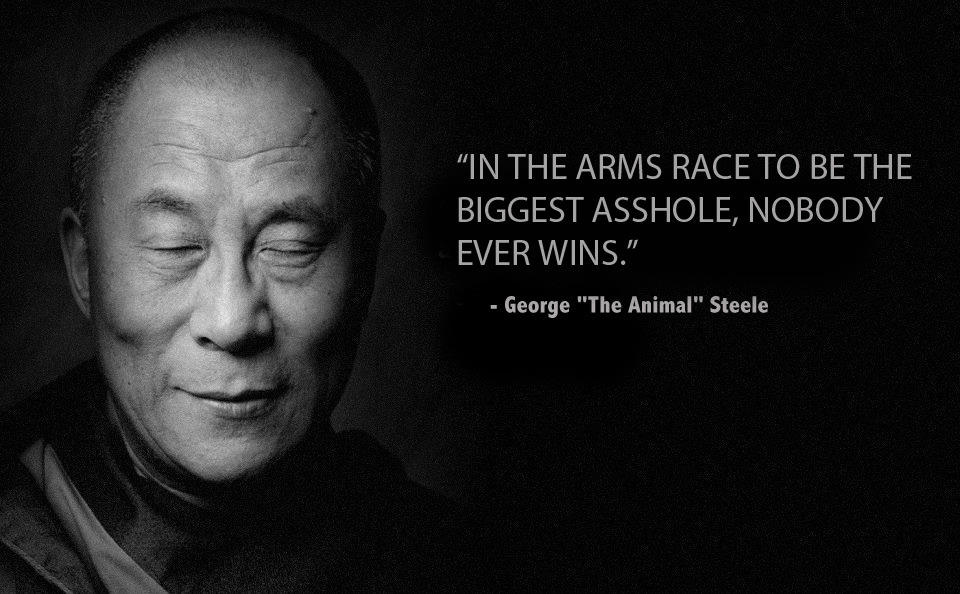 Of course that’s what he would do, and what we should do, but most importantly the thing one has to do when faced with that kind of complete insanity is to take a deep breath, push your chair away the desk and leave the room towards something like this; 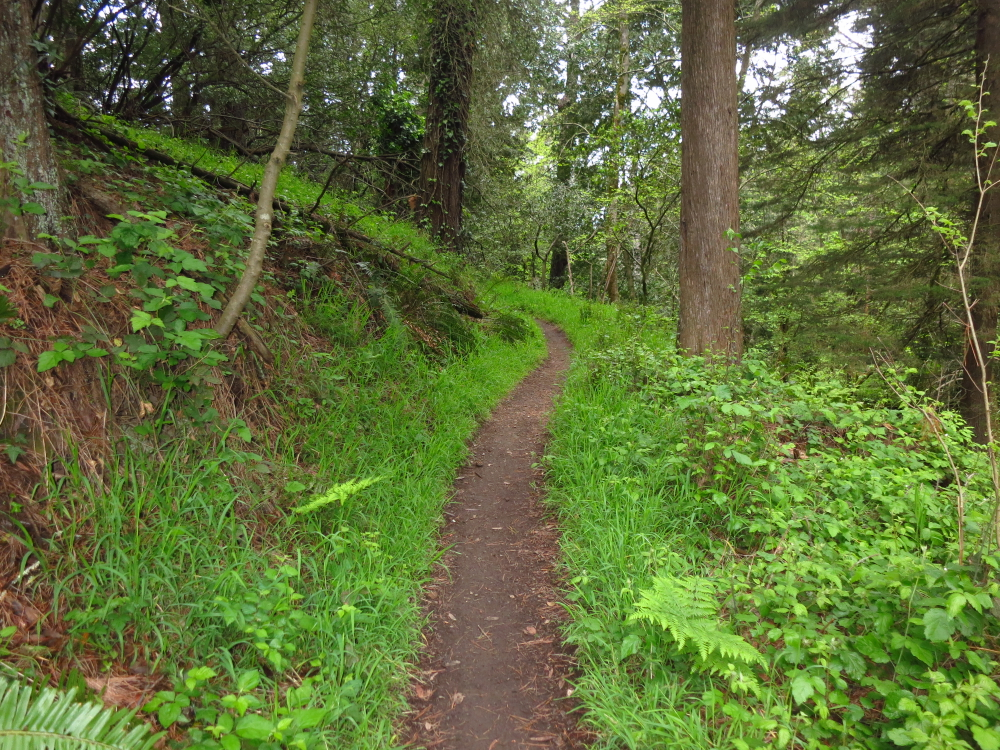 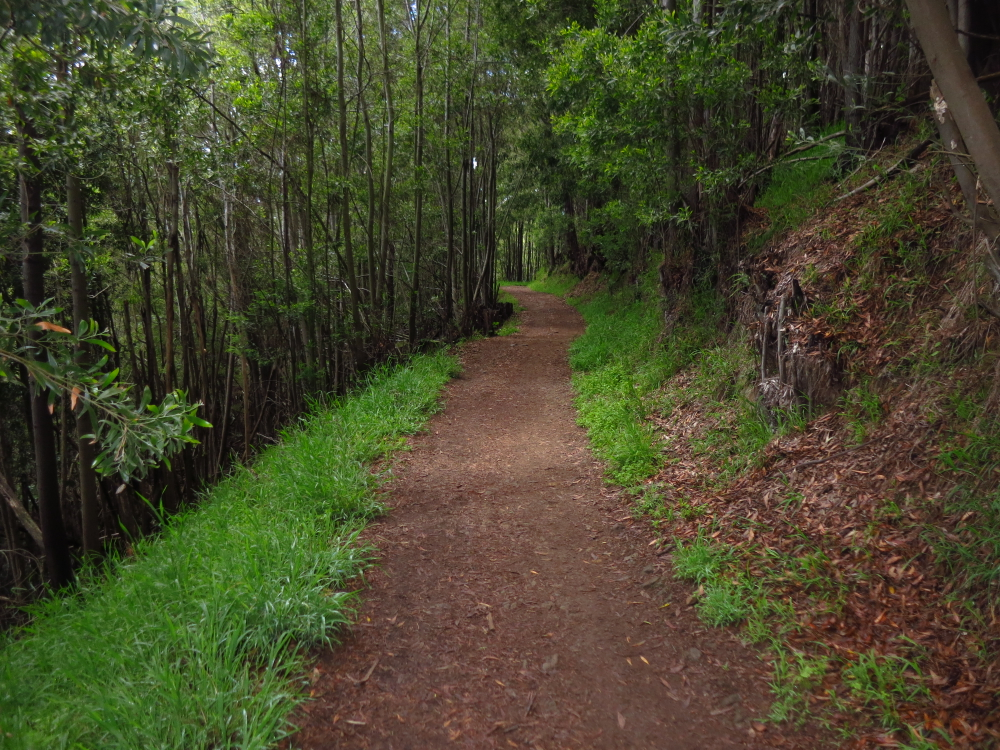 Though even chores aren’t left very far behind when you come across a scene where dopes cut the corner through a perfectly good switchback. 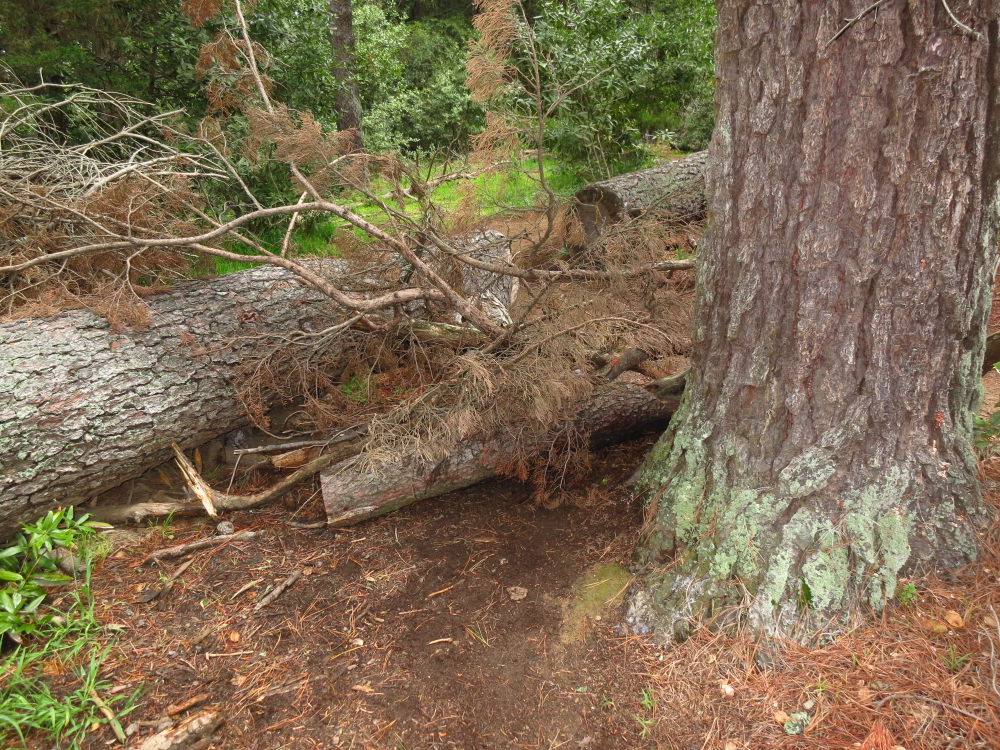 Even with a head full of hate induced cob webs, it felt good just to exhale.

In a final twist, and in reference to the entry of today’s post, I’d like to note that at the conclusion of my ride, I ran into Gentle Fred and Young Carl. We were standing roadside shooting the breeze about nothing in particular, when a truck full of big bikes and people clearly too lazy to ride them to the trail drove by and bellowed out the window, “GET OFF THE ROAD!”

Because ever since that Alanis Morissette song came out, I’m not clear on what’s ironic or not, but I’m pretty sure that was.

Now, moving over into the mail bag, I have a few odds and ends to take care of before we’re dismissed.

The first being from Kevin;

“Just read your bit in Bicycle times liked your Eddy Merckx story. Have one similar, in 1988 I think, the Bike show was in Atlantic City New Jersey. One morning I went out on the boardwalk outside of the hotel and who was standing there smoking no less, Eddie. I was a little shocked and could only manage “Eddie you smoke”? He blew smoke in my face and grunted oui. That’s it my big brush with fame.”

The Bicycle Times piece that Kevin mentions is an interview in the new issue that was done with me in a fifty rapid fire questions style.

The interviewer asked me who the most famous person I ever met was, which apparently was Eddie.

And our exchange was just about as noteworthy as Kevin’s was.

Then Jeff from Maximo Supremo resident All City Bikecycles made the contact with a photograph by Tom Robertson proving once and for all that being loaded down with your haul from the local farmer’s market is no excuse not to get some rad on; 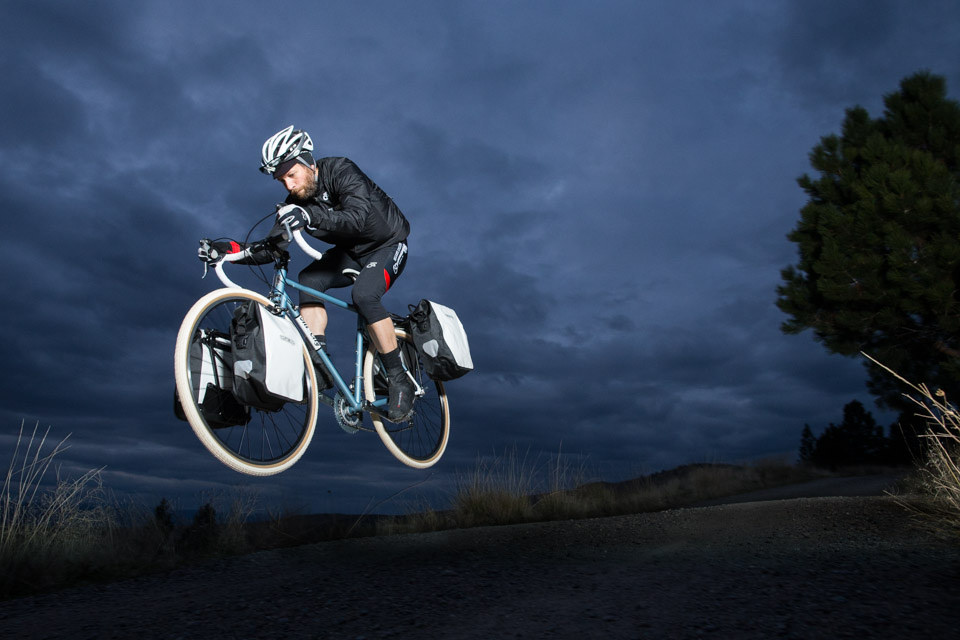 Just make sure your eggs are protected.

And as long as I’m giving a hat tip to advertisers, I’ll again note that Pentabike is having a Taxation Reclamation sale of their hugely popular Side Car Unit;

Not only that, but my old friend Pentabike Dave did me the huge honor of penning a short bit detailing our history together here.

He may be a complete derelict, but he’s my derelict, and that’s all I could ever ask for.

And lastly, just because I kinda have to keep whipping this horse until it either dies or runs away from me, I’ll make mention again that Voler very kindly re-opened the order window for the brand spanking new and sickeningly attractive 2014 AHTBM kits until the 18th of May, with a ship date of June 16th though the 20th; 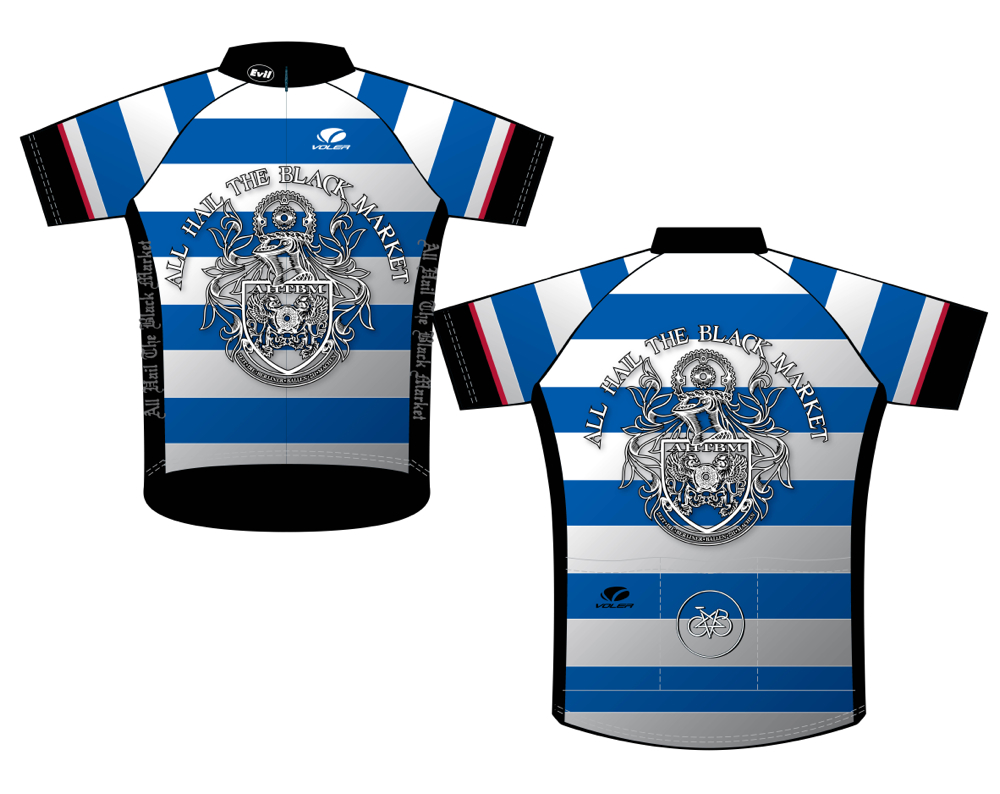 As I’ve said previously- If you wanna be fast, that’s your business.

But if you wanna look fast? Let that be mine.

And it’s with that, that we’ve come to the conclusion of the stuff.

9 Responses to “Stuff and Things and Junk and Stuff.”