Hello, and welcome back to our thrice weekly ten to fifteen minute time suck.

Because we’re friends, and with the exception of only a couple of you, I trust you with my life, I feel compelled to make mention of the fact that unless I have my laptop with me, and I’m capable of hodge-podgeing a post together, I will be gonesville until next Friday. The reason for my absence I alluded to on Monday.

You see, since my days climbing pallet shelving and hucking boxed bikes around 50 plus hours a week during my employ with Swobo, my wrists have been in a constant downward spiral. While the arthritis in my left wrist was initially spawned from a break when I was younger, followed by many years of use and abuse, (i.e. riding mountain bikes with rigid forks), the issues with my right came spontaneously two years ago when I suffered a sprain while doing nothing but coming to a stop after a long and enjoyable cyclocrossing adventure.

I’ve dealt with the inconvienience with a partial smile on my face while engaging in a year and a half of strength training and physical therapy, and I thought I’d gotten ahead of it well enough until last Tuesday my right wrist again went out on me while holding myself in a stretch.

Realizing that this just isn’t a sustainable way to go through life, I investigated as many options as I could, but beyond cortisone injections, I was coming up with nothing.

At one point a coupe of months ago, one of my PTs noted that he reckoned I’d be a good candidate for stem cell therapy. As it turns out, him recommending it, and me actually finding a qualified clinic outside of Iran (who ironically is leading the charge in terms of stem cell research) were two entirely different matters.

In a move of desperation, I made a plea on The Book of Faces, and in short order, it turns out that a dear friend’s father runs one of the most revered stem cell therapy clinics in the country called the Prolotherapy Institue.

After a brief phone conversation with Dr. Darrow I was convinced that while this might not be the answer to all of my prayers, it very well could be the answer to some of them, which at this stage in the game is good enough for me.

For those who don’t know about this procedure, the short version is described in the following video;

So over the course of the beginning of the week I will be face down on Dr. Darrow’s table, getting my pelvis drilled, and not in a sexy way.

I can’t describe how excited I am to engage in this process, while simultaneously experiencing utter terror, but as I noted before, where I’m at currently just isn’t working for me, so I’m willing to forge ahead to find a solution.

As I’m sure you can guess, this procedure doesn’t come cheap, so it’s on bended knee that I humbly make a request to anyone who might find the need to restock on any or all of the goods from the All Hail The Black Market Market, there’s no time like the present.

Relating to that like, a little bit- in a fortuitous bit of timing I heard tell that there was gonna be a swap meet in Oakland this weekend, but then I saw the flyer; 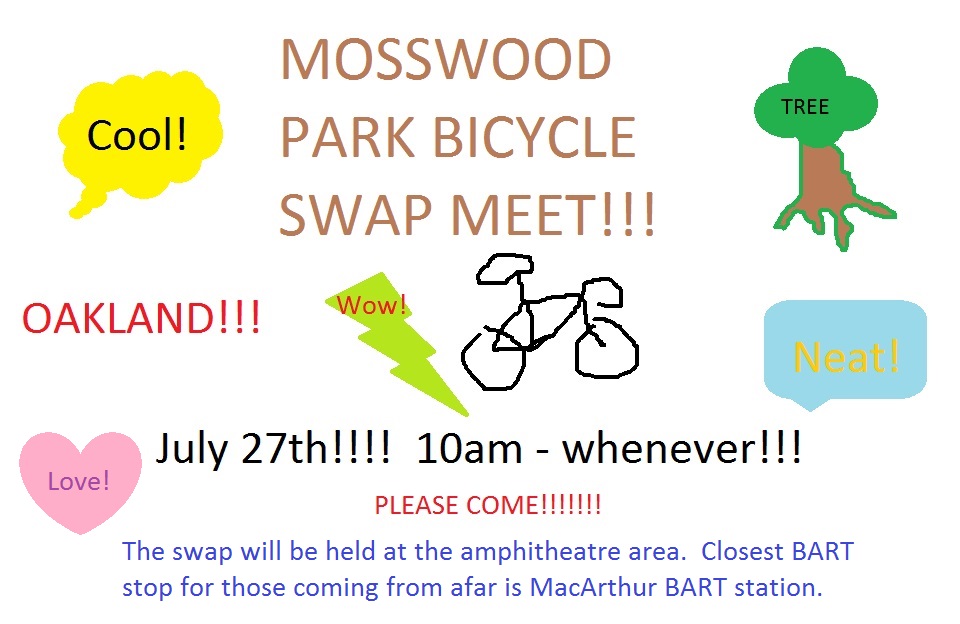 Being one who is immediately repelled by things that look like they were made by a six year old with a potato sack over their head, I promptly made a revision that looks much better to my particular aesthetic; 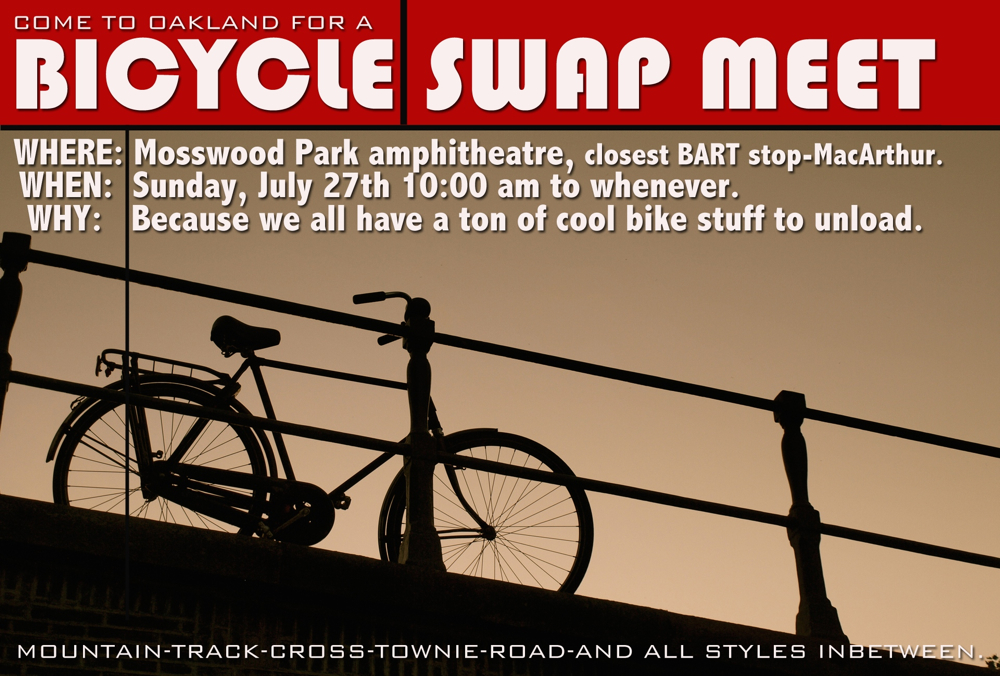 Like something made by a twelve year old with a potato sack over their head.

Point being that I will be there with a whole fat stack of stuff from my basement. In fact, some of it is brand new and in the box. In more fact, some of it will be from the aforementioned Market. In even more fact, all of it will be priced to sell, so come one, come all, to see a broken man sitting alone in a park selling nearly everything he owns.

Anyway- as always, I thank you for your time and consideration on this matter.

Now, if you’d do me the consideration of doubling back around to the topic of the southern part of the state, Mr. Hernan Ezequiel Montenegro and his MMFG imprint have a hoedown scheduled for just about one month from now; 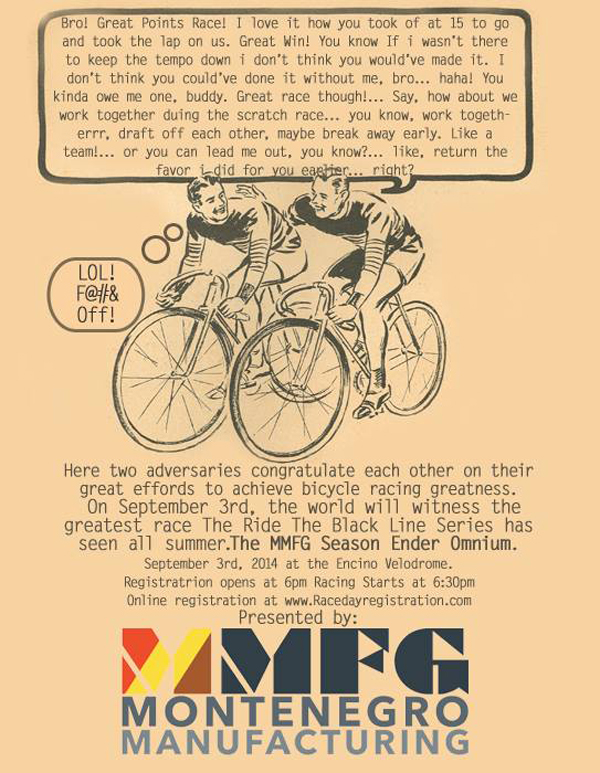 Hern is reputed as being just about one of the baddest M-er F-ers on two wheels down in that neck of the woods, so mark your calendars and know if he’s participating in the event, the best you can hope for is second place.

Then, while we’re discussing bikecycle honches, Gavin came through with a heads up from a far away and cold land;

I know you are a fond collector of documentary evidence of your wares in action. Given your pal Chuey’s recent good news, I hope this is an opportune time to send you the attached photo; 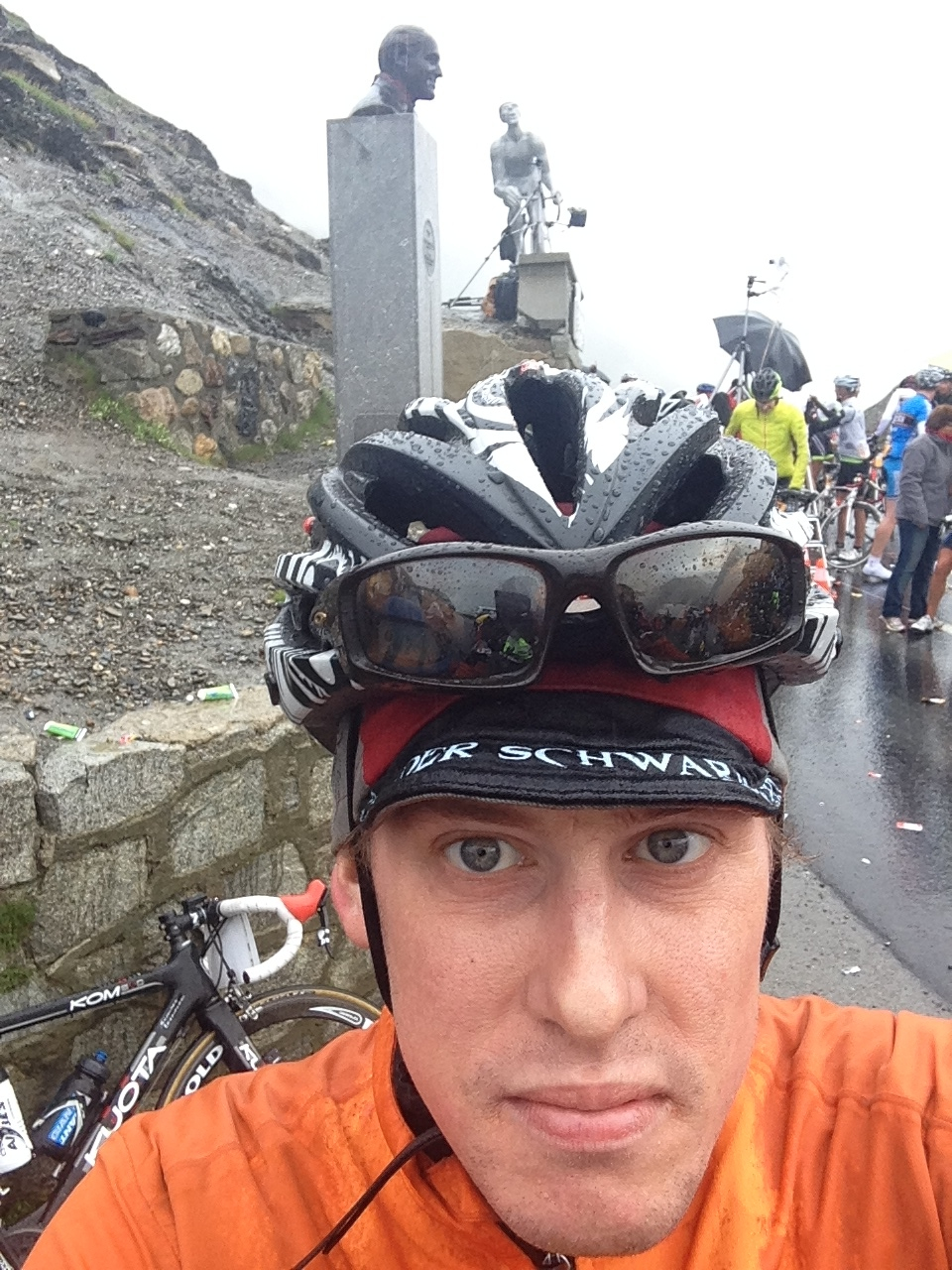 This was taken last Sunday at the top of the Tourmalet during the 22nd running of the Etape du Tour. As you can (kind of) see, the weather threw us a fastball and, despite warm conditions in the valley, at the top of le mountain it was freezing cold and raining.

The French organisers (a contradiction in terms if ever I heard one) opened up the town hall at the bottom of the descent to treat the many victims of hypothermia. I declined their kind offer of a space blanket and pressed on, unwilling to let months of training be derailed by some pissing French rain.

As you may recall, your quality control department had an off day when it picked my order, so I am unable to send evidence of the Blackweiser socks in action.

p.s. That is not my bike behind me, I did the whole thing on my trusty steel Condor.

p.p.s. Forgive the tight lipped expression, it was extremely unpleasant out there, and I still had 30 miles to go and the Hautacam to climb.”

There is nothing more that I appreciate than a little love in the form of an email notifying me that the sender is a thousand times tougher than the person who is currently typing these words.

Circling back around to, and continuing on with news of injury-risking bicycle hi-jinx for a second, it was just a couple of weeks ago when Swobo, New Belgium and I descended on Minneapolis and One On One Bicycle Studio to unleash the most recent Folsom Fist Fight.

There were spills, and thrills, and chills and pills, and nearly some of it was caught on camera;

A number of curious onlookers were lurking at the end of the alley, in an attempt at figuring out just what the hell it was we were doing. Some folks sauntered in for a closer look, while others stayed at a safe distance.

I invited one young couple in to have a beer to which the male counterpart said “I’m just trying to figure out what you’re doing.” In response I offered this- “Do you remember when you were a kid, and you and your friends would spend the day goofing off and ripping around on your bikes in a vacant lot?” After a short pause he said that he did, to which I said “it’s just like that, except we’re a little older now.” 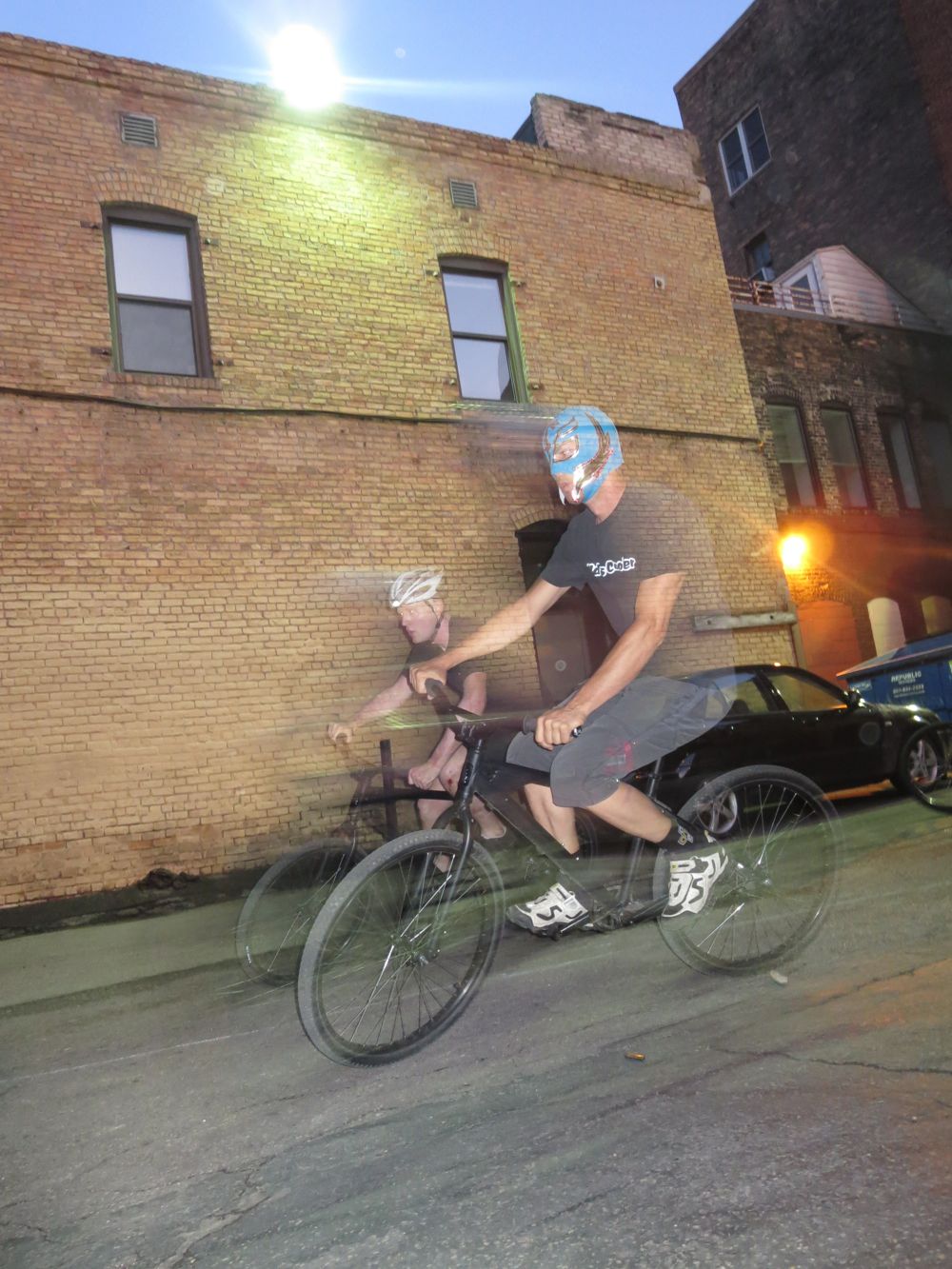 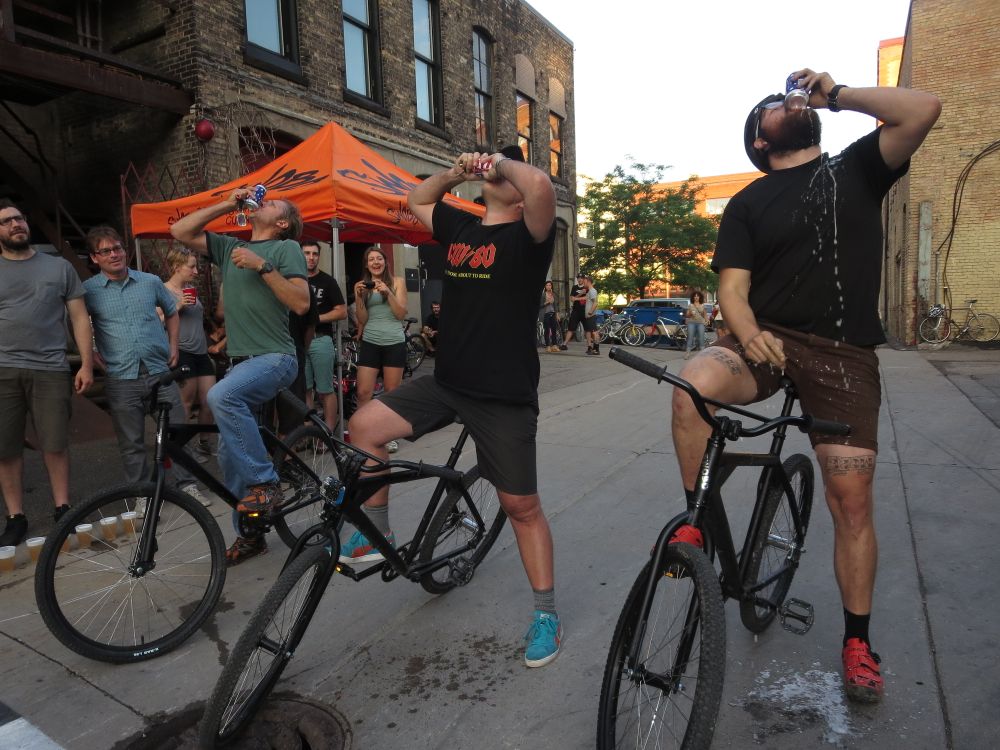 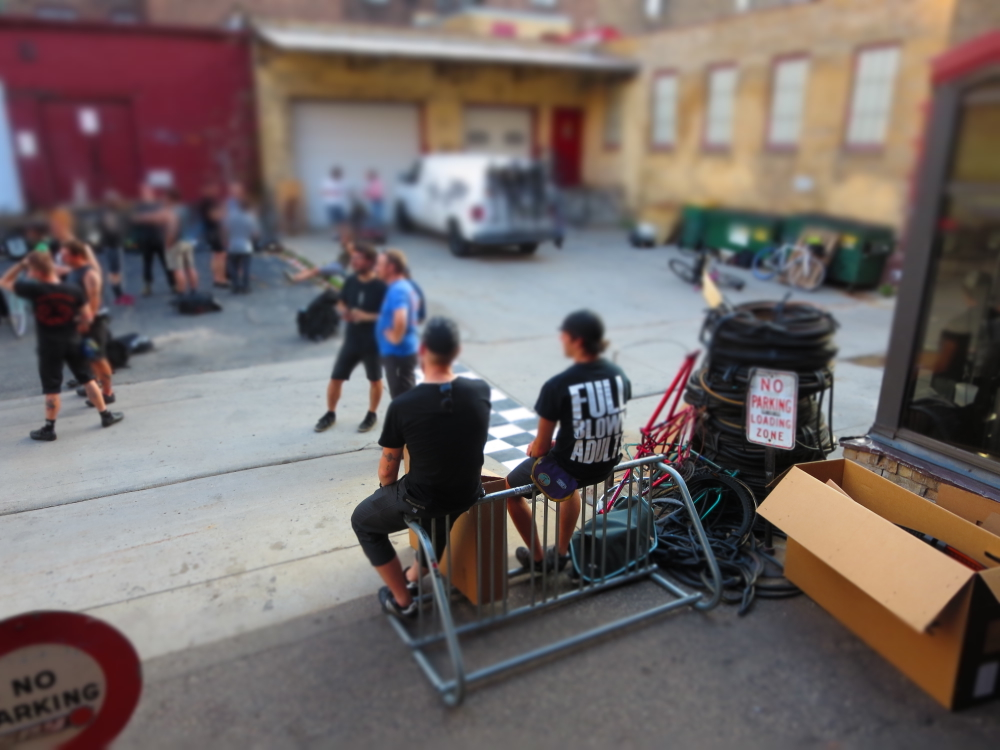 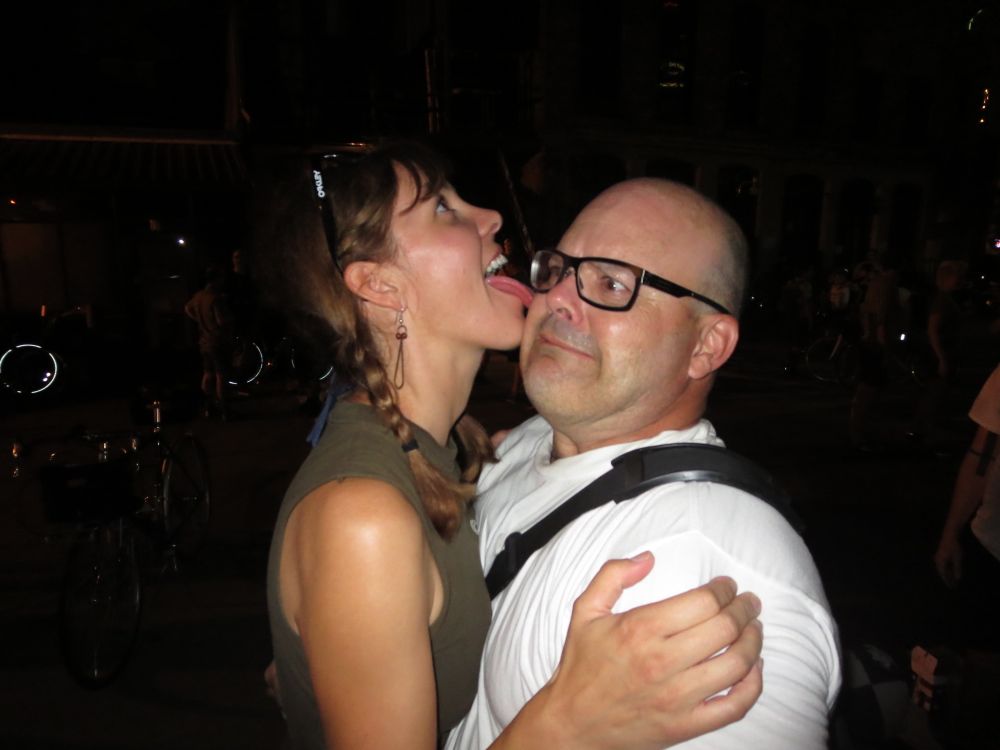 That’s when it clicked for him, and I could see a knowing smile cross his face.

And in turn, I realized that what all of this is. This site, this community, this way of life. All it is, is an extension of what we did when we were kids.

For some reason, when people go through puberty, a majority of the population moves on and forgets the importance of slogging around in a creek bottom, or having BB gun fights, or exploring a cave, or, in this case, skidding around in a back alley while swapping lies and simply enjoying being alive.

Engaging in this sort of activity is nothing new. We’ve done it since we could walk; 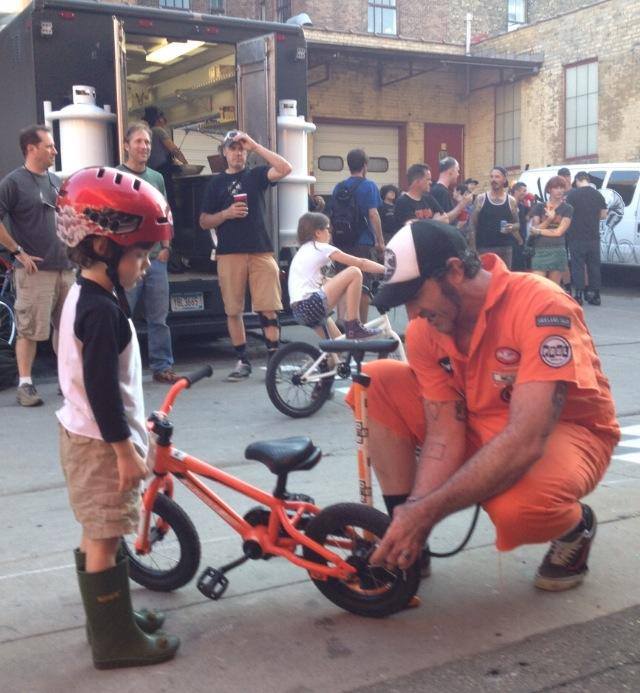 The most crucial aspect of these events, or living the daily life that we do is to serve as a reminder that it’s still the most fun you can have with your clothes on, and sometimes clothes coming off is part of it.

Finally, while we’re on the topic of clothes, it’s recently been brought to my attention that orange jumpsuits are now considered too cool for jail.

Clearly, my Amigos and I live in the future, and the future looks orange.