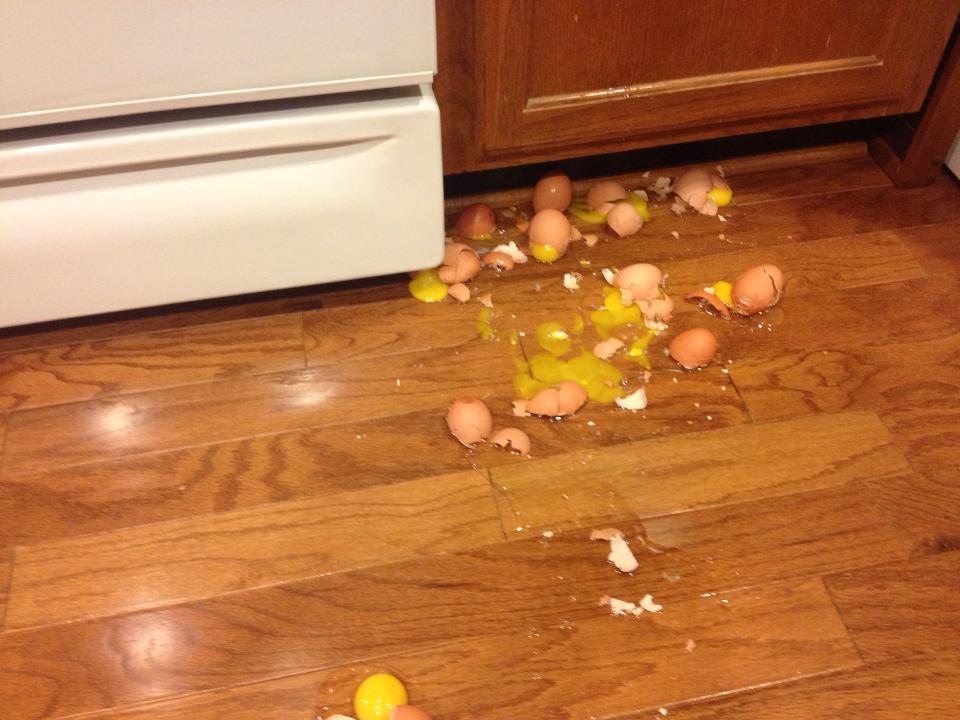 However, in this instance that would be a totally gross omelet.

Before I get into much, I’d like to note that I’m currently on my way to Washington State, home of The Bigfoot, and the land where Kona Bicycles has their big, sweet product launch every year. If you need me, I’ll be here through the week. If I owe you money, don’t bother me until I get home.

Like I was saying- As Kona rolls out their new wizbangery and whatnots, (just like last year, which you care, you can refresh upon here and here, or even the year before, which is both here, and here), they’ve very thoughtfully included me in the process.

It’s clear that Kona sees some worth in my presence every year, but I’ll be damned if I know what it is. Just the same, I will be posting up with them for the latter part of the week, and presenting to this audience, most all of which I find to be noteworthy.

Between now and then however, it hopefully will just be a ton of footage of Heather;

And binging on coffee.

So until we get around to that stuff, let’s focus on other stuff. The most important of said stuff, being the updated header banner that was done up for me by the wildly talented Mr. Christopher Wright;

Second to that, it’s a real, live t-shirt/coffee cup/frisbee/back scratcher graphic as well; 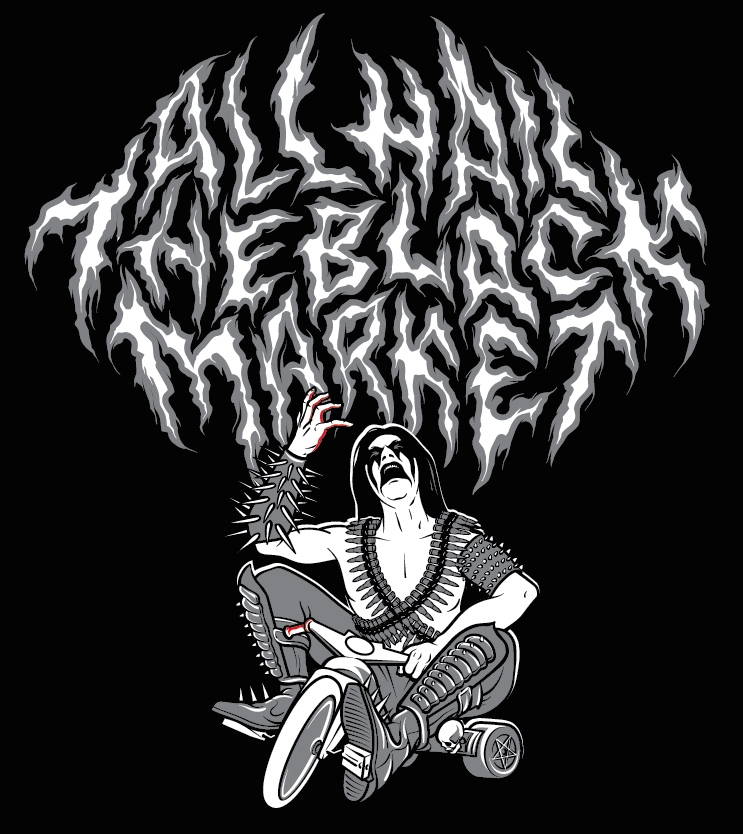 I plan to trot this out on an array of product in the next couple months, so keep your pants on.

For now, I just want to stare lovingly at it.

Now, I dunno how many of yinz follow the racing of the BMX bikes. I haven’t for an age and some change, so it was of great interest when I came across this footage of Sam Willoughby shutting out the men’s field at the recent BMX Worlds.

Both he as well as women’s World Champion Mariana Pajón confirm the old adage that rubbing is in fact, racing;

Damned honches, both of them.

Relating to that only by half, I received a transmission a couple of weeks ago from DPow! of Portland Design Works that left me feeling kinda let down;

Olson just found this gem in a free bin in Portland. Thought you’d both enjoy. I guess people in Portland aren’t as cultured as we thought… It is going into the PDW reference library with our Sinbad, Paul Reiser, Rosie O’Donnell and Sandra Bernhard books; 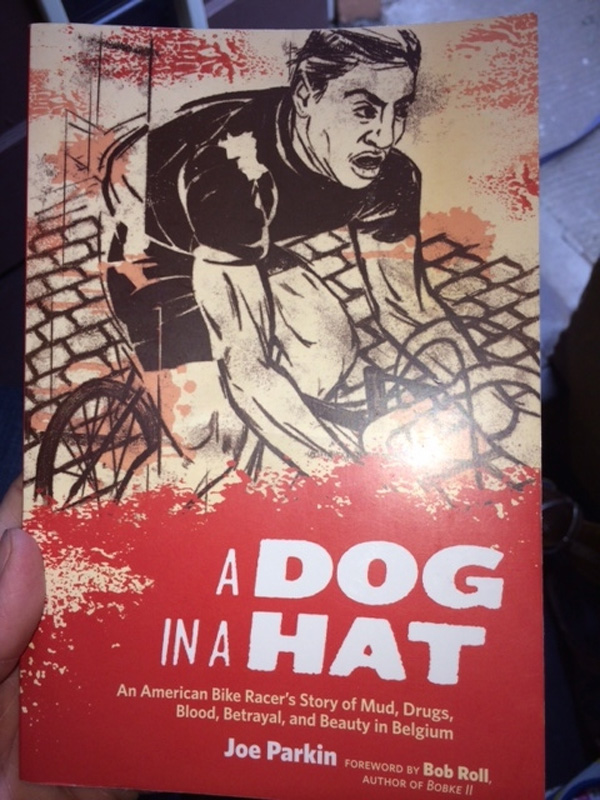 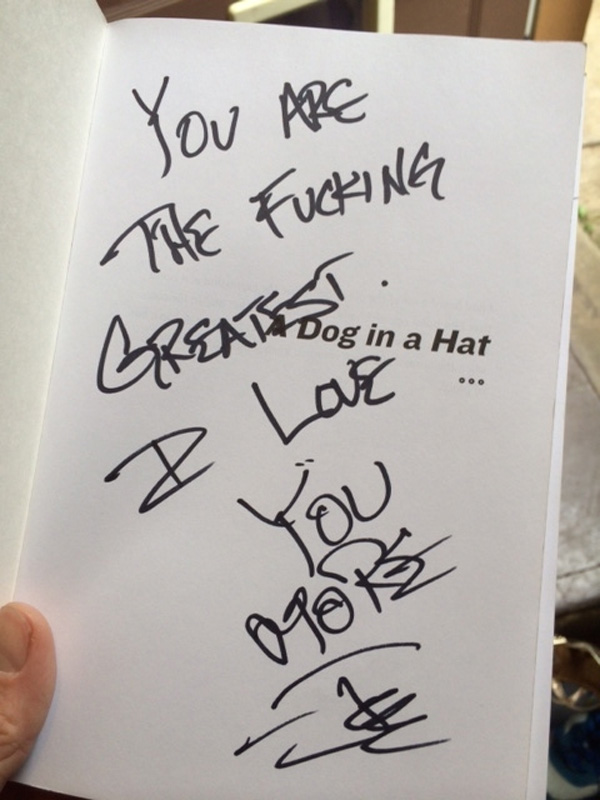 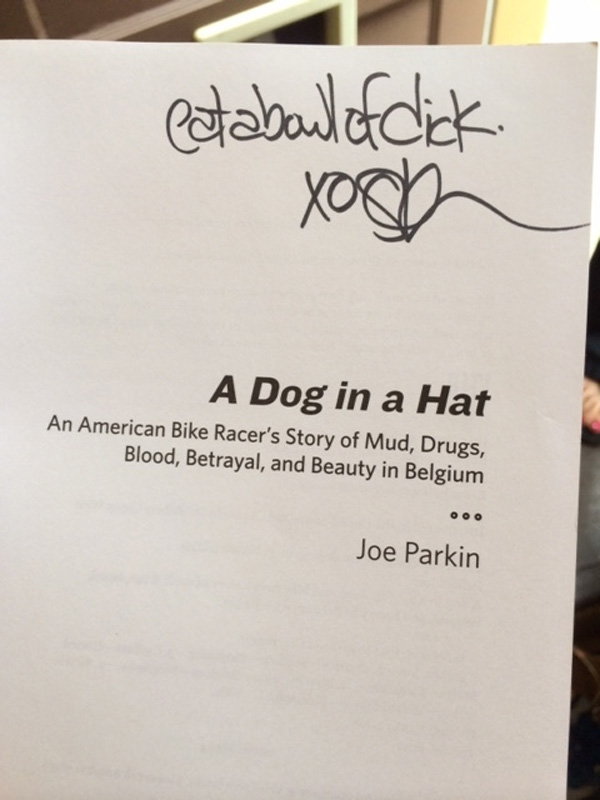 This of course was Joe Parkin’s first book, which if you haven’t read, you should.

And I remember how this copy actually wound up in Portland. At some point a long time ago I held a contest in which participants would drink beer while riding rollers. The details are all within that hyperlink in that last sentence, but if your clicking finger is broken, it went like this;

“This will vaguely be like the Fat Cyclist’s 100 Miles To Nowhere, except no one will be benefited, blood and/or vomit will surely be spilt, and I don’t have any fancy Twin Six gear to honor the occasion.

In order to complete the full three beers, the first three minutes of competition, the contestant will have to do one shot every 30 seconds.
This makes a total of 36 shots equalling a total of three cans of beer.”

If I remember correctly, which I probably don’t, I believe bourbon was somehow involved as well. Anyway, the folks that ultimately won the contest were two fellows from Portland, and among the wildly impressive array of prizes, they received signed copies of the aforementioned book, which apparently was good enough until it wasn’t, and ultimately got dumped in the free bin.

It took some doing, but I tracked down the post detailing the winner’s saga; 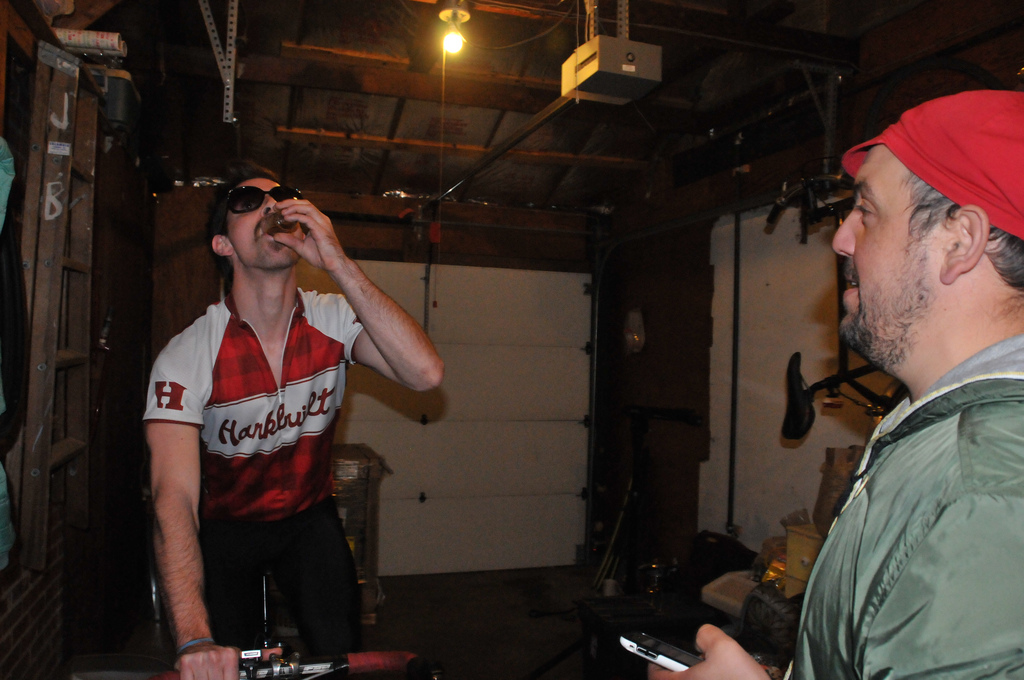 I see on the fellow’s Flickr page, a photo hasn’t been uploaded since the date in question, which leaves me scratching my head.

I hope Aaron or Sean (whichever winner the signed edition belonged to) is safe and sound and that the book wasn’t dumped into the free bin by their significant other shortly after they were.

Lastly, since I’ve been slightly sidelined with injury and the results of attempted repair of said injury, I have to live vicariously through others. Most recently of said ‘others’ is Mr. Ethan Swanson;

I don’t know about you, but that makes my eggs hurt.

7 Responses to “To make an omelet, you must first crack some eggs.”