Gary knows what I’m talking about. As we proceed to get both into, and down to stuff, I’d like to post this here video that Ritte Van Vlaanderen debuted last week, which in my humble opinion, illustrates the reasons I love the brand so;

Which are all of them… I love Ritte for all of the reasons.

And relating to that, a bike that I first saw as it hatched when I was visiting in July is the brand new disk Crossberg; But for real- The little kid in me with a hard on for all things SE Racing has an epic sized boner for this bike, and it’s utterly perfect color scheme.

Secondly, and as long as we’re having a bit of a viewing party here, sit back and enjoy this little snippet detailing the nuts and bolts of Portland Design Works;

I’m proud to be partnered up with these kids. Not only do they put their money where their mouths are, which in this industry seems to occur less and less frequently, but they’s good people who make good stuff.

While we’re on the topic of the fine residents of the Maximo Supremo section, I’m proud to have two new entities therein.

The first being those kids from the other Portland, Twin Six; 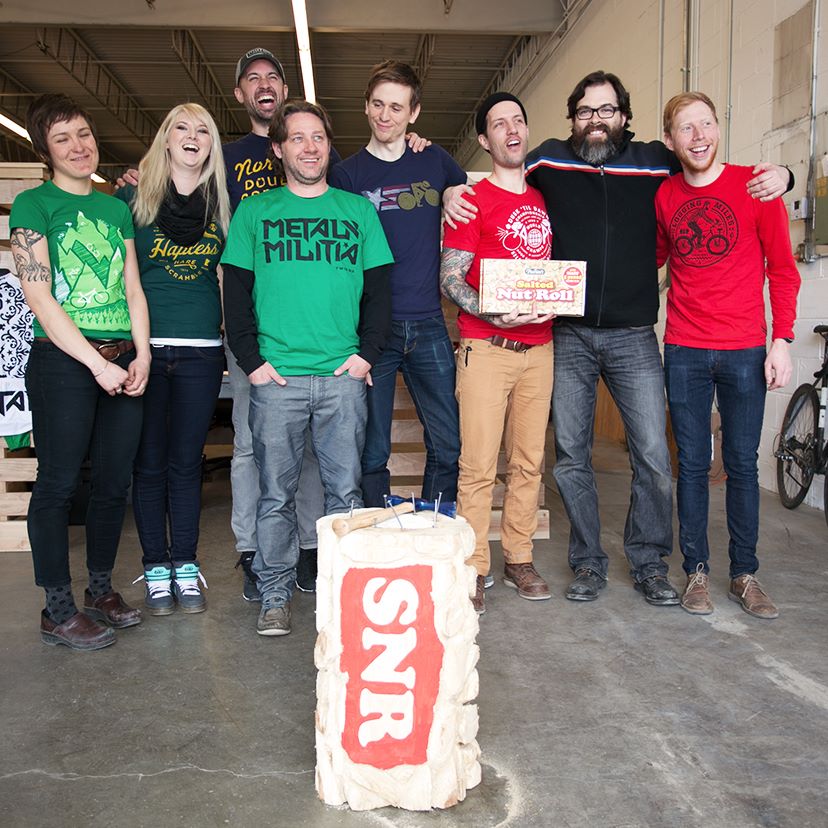 Frankly I was surprised when they approached me regarding this matter, due to the fact that they, in my opinion, are operating on a considerably higher level than I do, and perhaps might view my humble enterprise as not being worth their time.

Apparently they do and they have, and I am tickled to a near shade of pink that they are here with us now.

The second are a couple fellas who I first met a couple years ago while doing a photo shoot for Raleigh Bicycles; 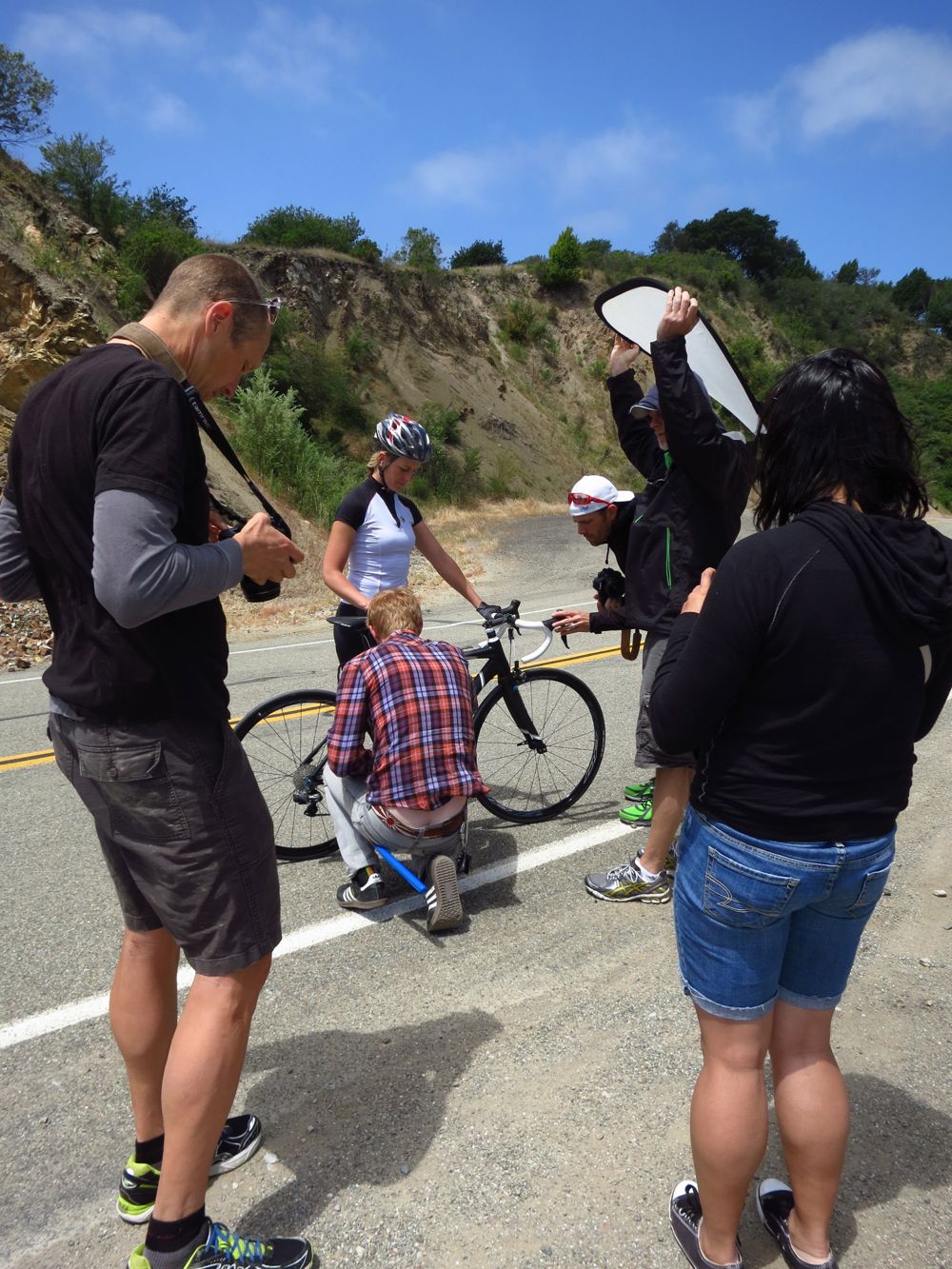 They are two dudes called Chris and Greg, and besides being ace photographers shooting for their imprint called Motofish Images; 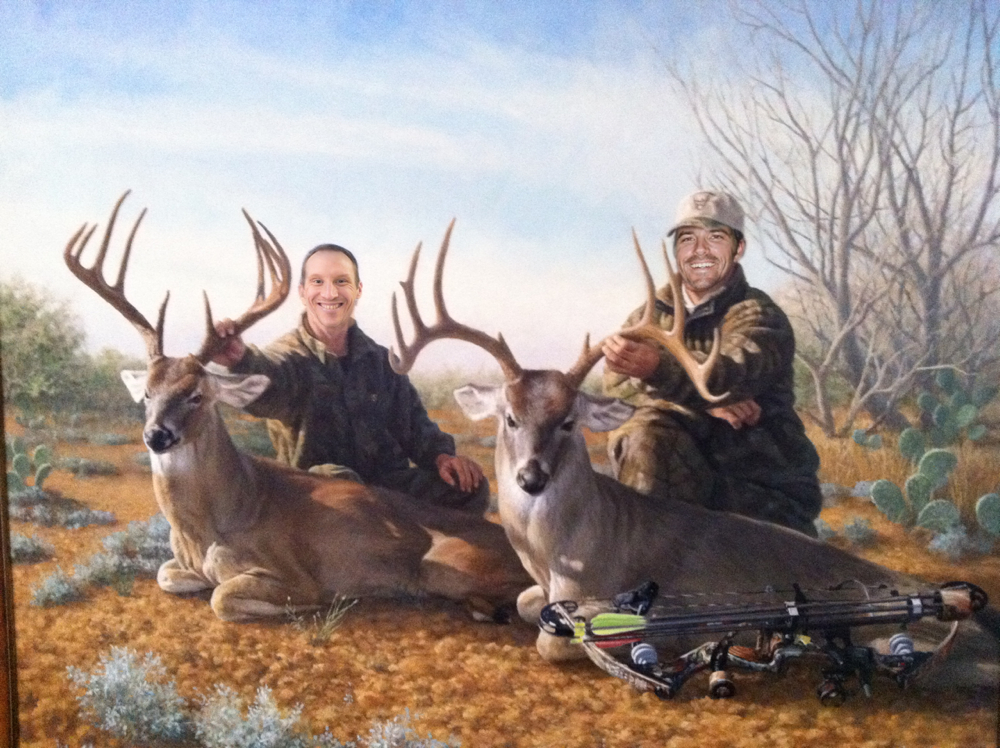 -they’ve expanded their empire to include Motofish Coffee;

And speaking of the Jpow!, I’ll roll out this old clip of him and and buddy Junker getting rad on the cyclocrossing bikecycles in my old stomping ground;

I certainly am a big fan of the trail ridings upon cyclocrossing bikecycles.

Anyhow, I’d like to humbly thank both Twin Six and Motofish Coffee for their support and I look forward to many happy days together.

Transitioning from that kind of business thing, to the next, Philip from another Maximo Supremo resident Upright Cyclist gave a holler regarding a newly launched product that they just fired out;

Another new release – the Lakeshore Jacket; 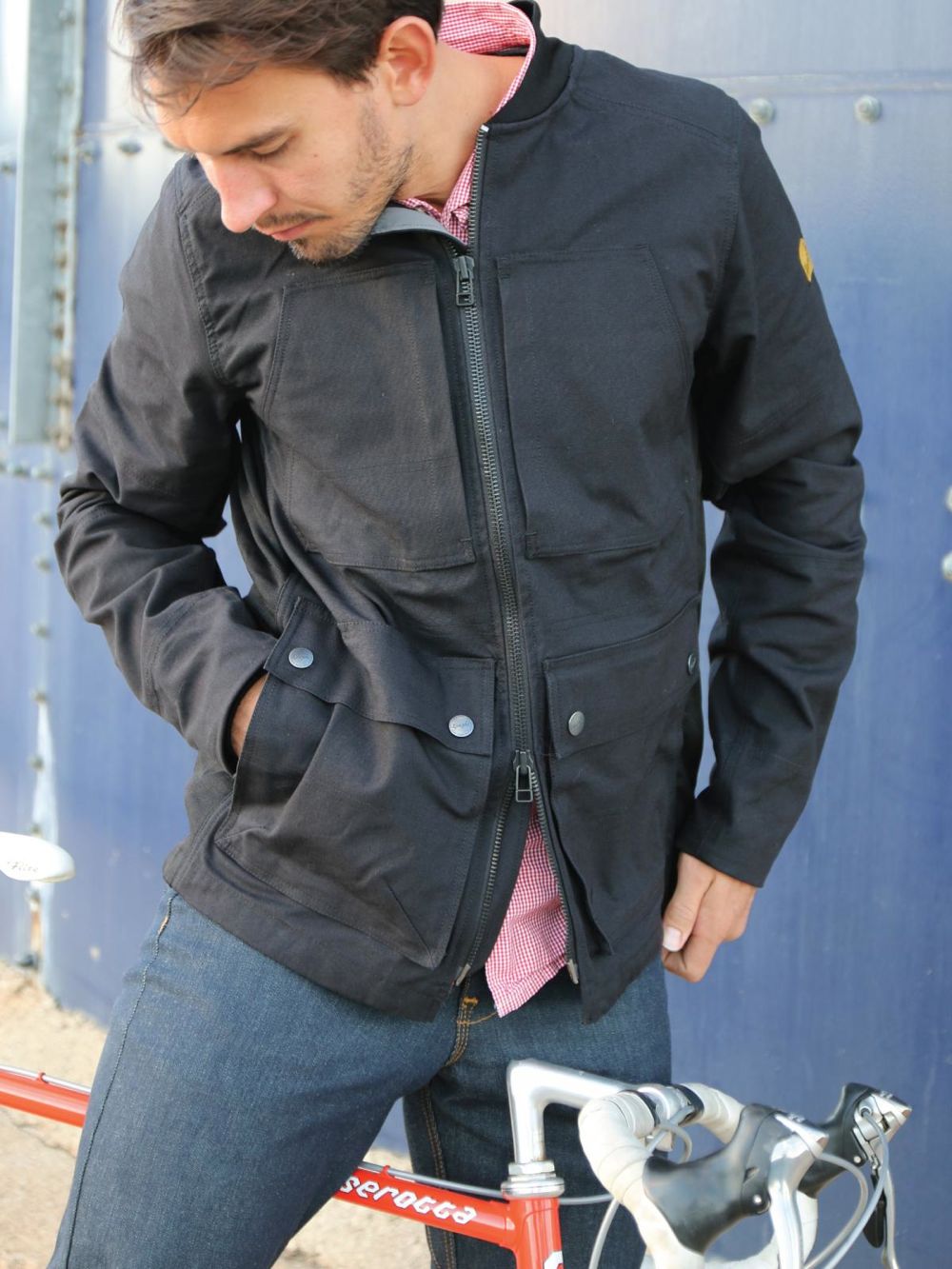 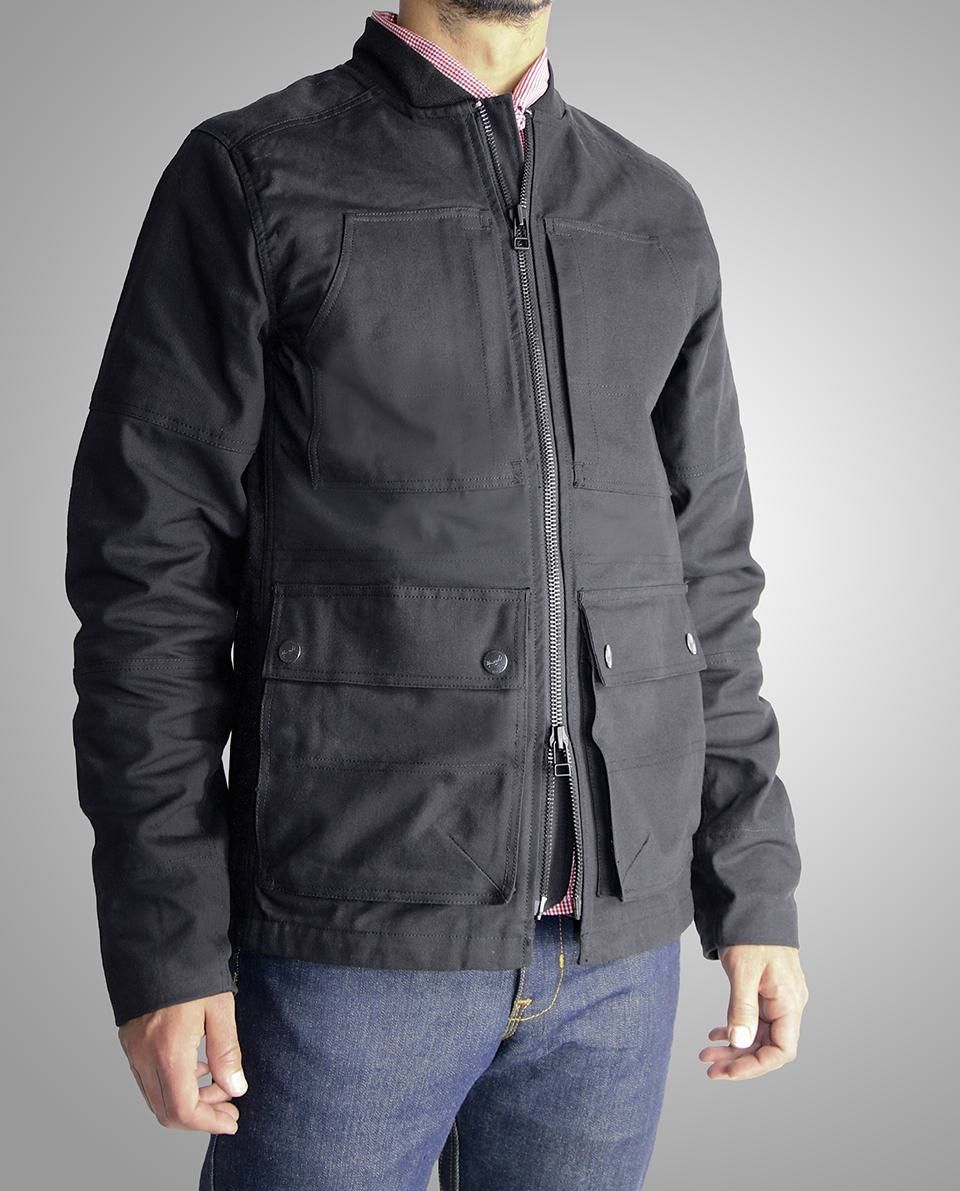 This is our play on the perfect cotton jacket cut for the city. It’s the right weight for short commute hops on windy cold days. It’s built in a Cordura ™ Cotton shell by Artistic Milliners. It’s a super durable, but breathable textile with long lasting use in mind. It’s cut for the street, but functional on the bike. A little moto, a little workwear, it’s styled with a coaches collar, has doubled nylon ribbing on the side panels and shoulder for stretch over the drops.

If you could give us a shout it would be great.

That number has a bit if a Carhartt feel to it, which speaks most specifically the midwesterner part of my being.

Now then, just because I’m kinda currently overwhelmed by a thing- Two weeks ago I got an email from a couple people called Duncan and Elayna from SRAM, blablaing about what kind of cross group I rode and what not. I said “I’m pretty sure I ride whatever kind of cross group I was able to hodgepodge together well over a decade ago.” Long story short, Saturday comes along, and a box full of Force CX-1 goodness lands on my front porch; 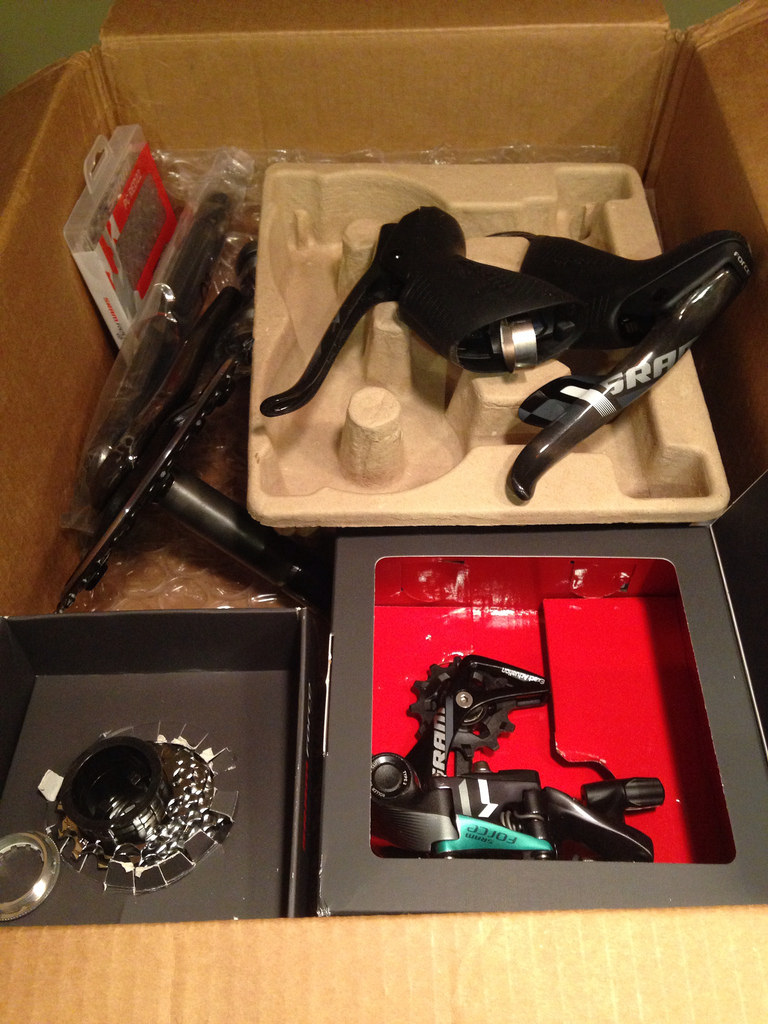 As I slowly striped all the aged components off of my bike, I reflected on the tens of thousands of miles we’ve shared together; 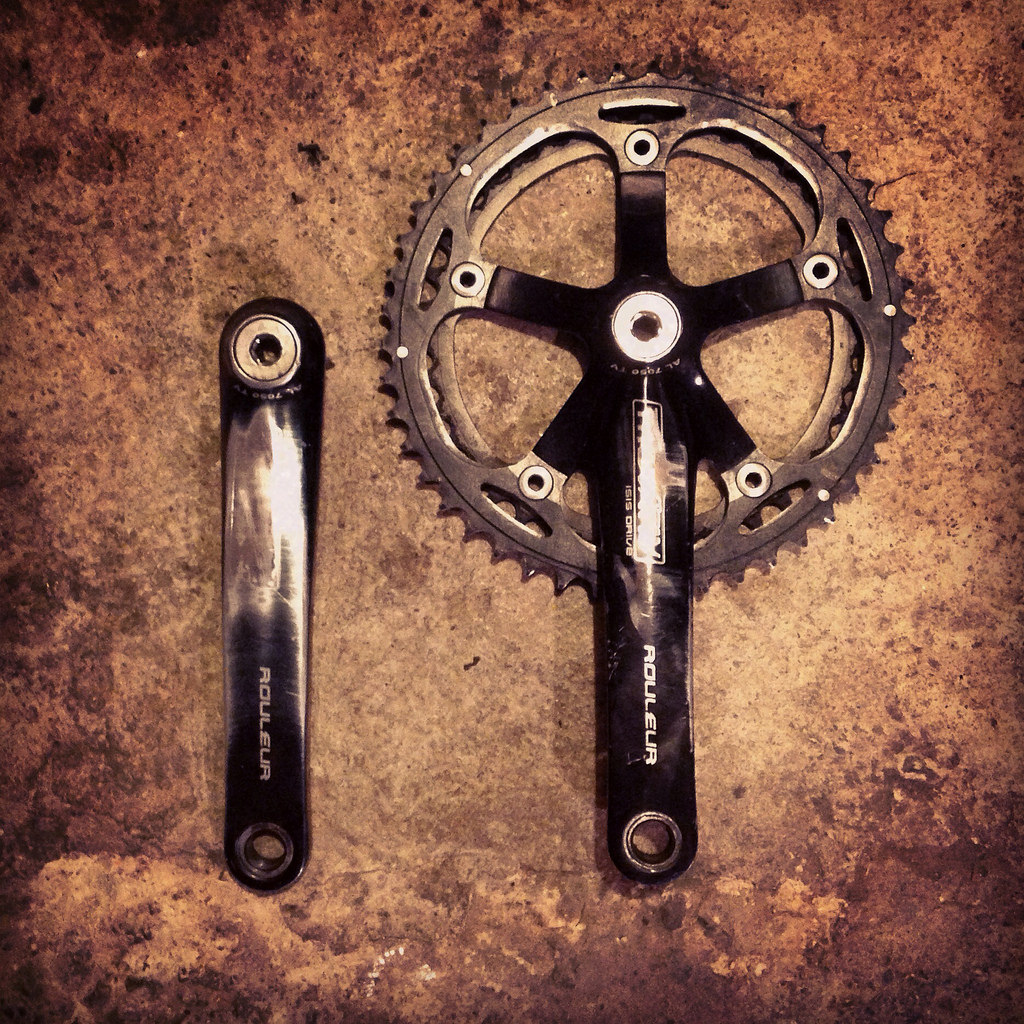 As soon as all of the bits and pieces were installed, it occurred to me that I’d broken the pin in my chain tool a few weeks ago and promptly got distracted when attempting to replace it so in my stand it sat; 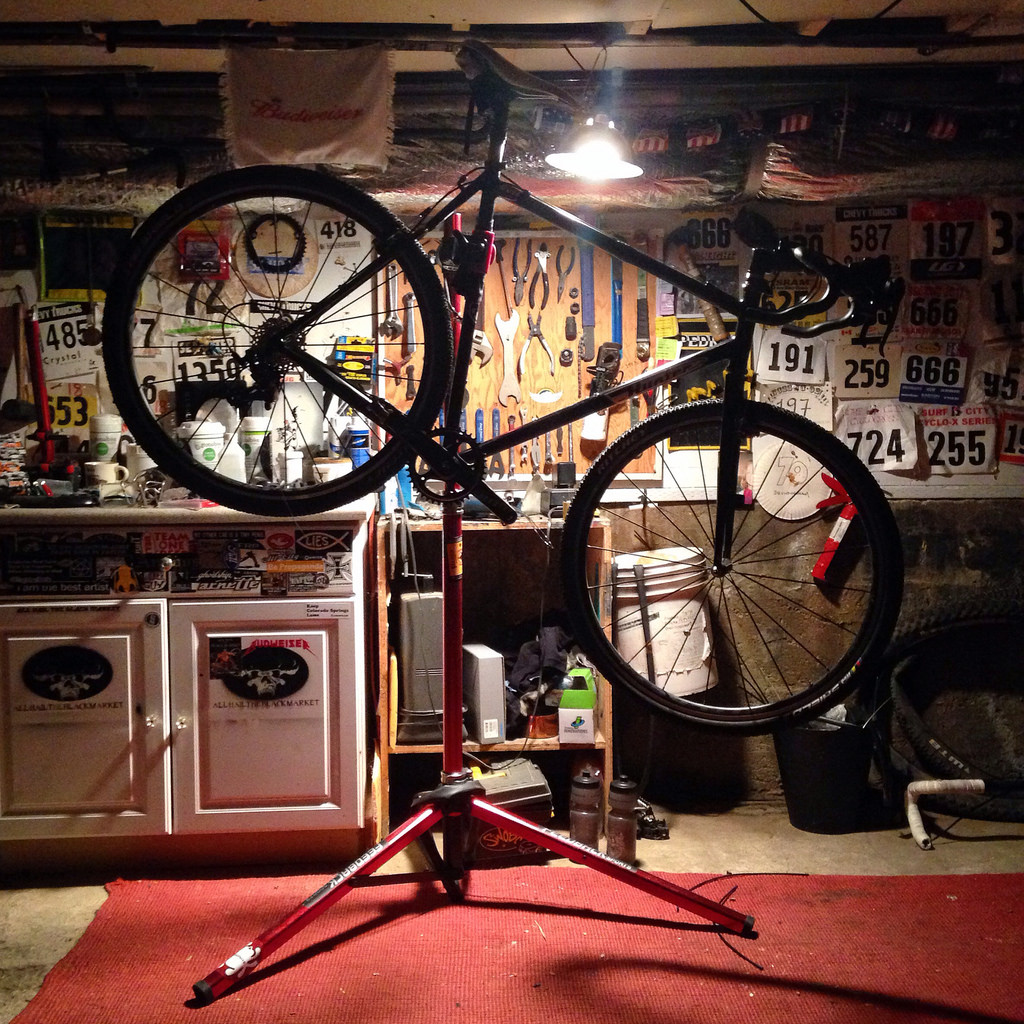 Finally, the following day I popped over to my friendly neighborhood LBS to snatch up a new one and after a final little bit of tinkering- voila; 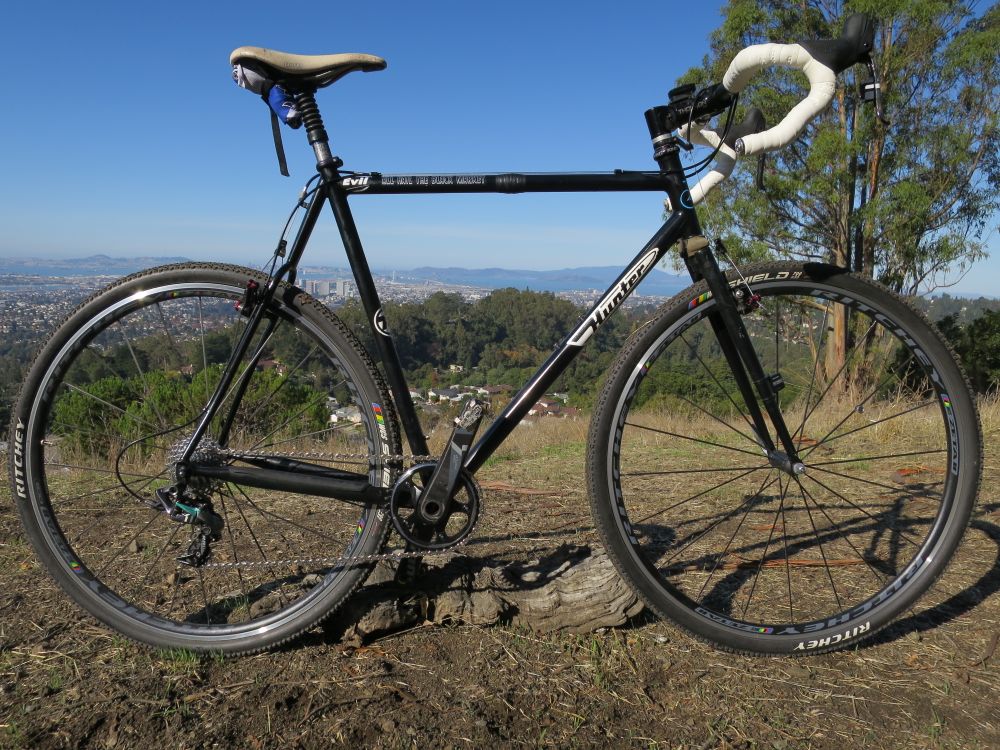 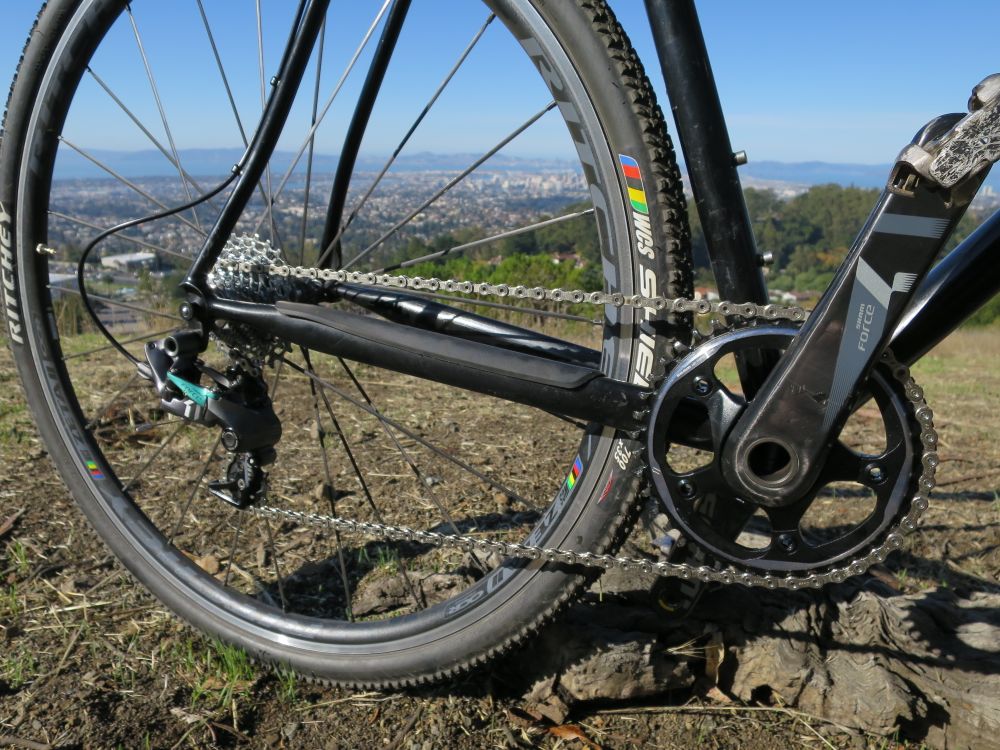 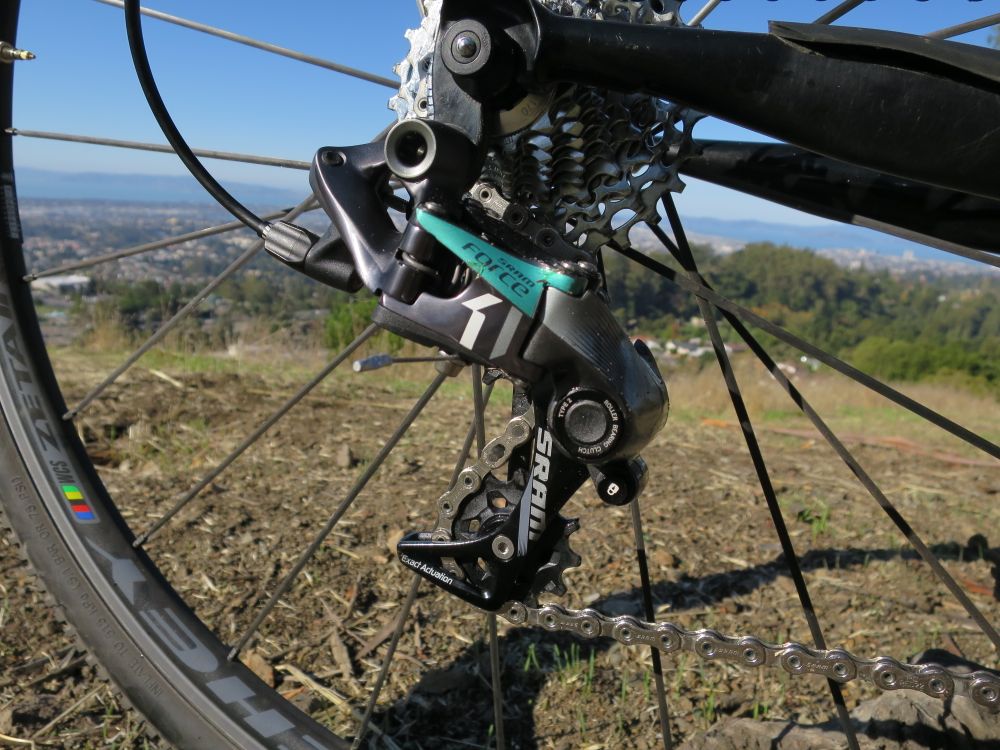 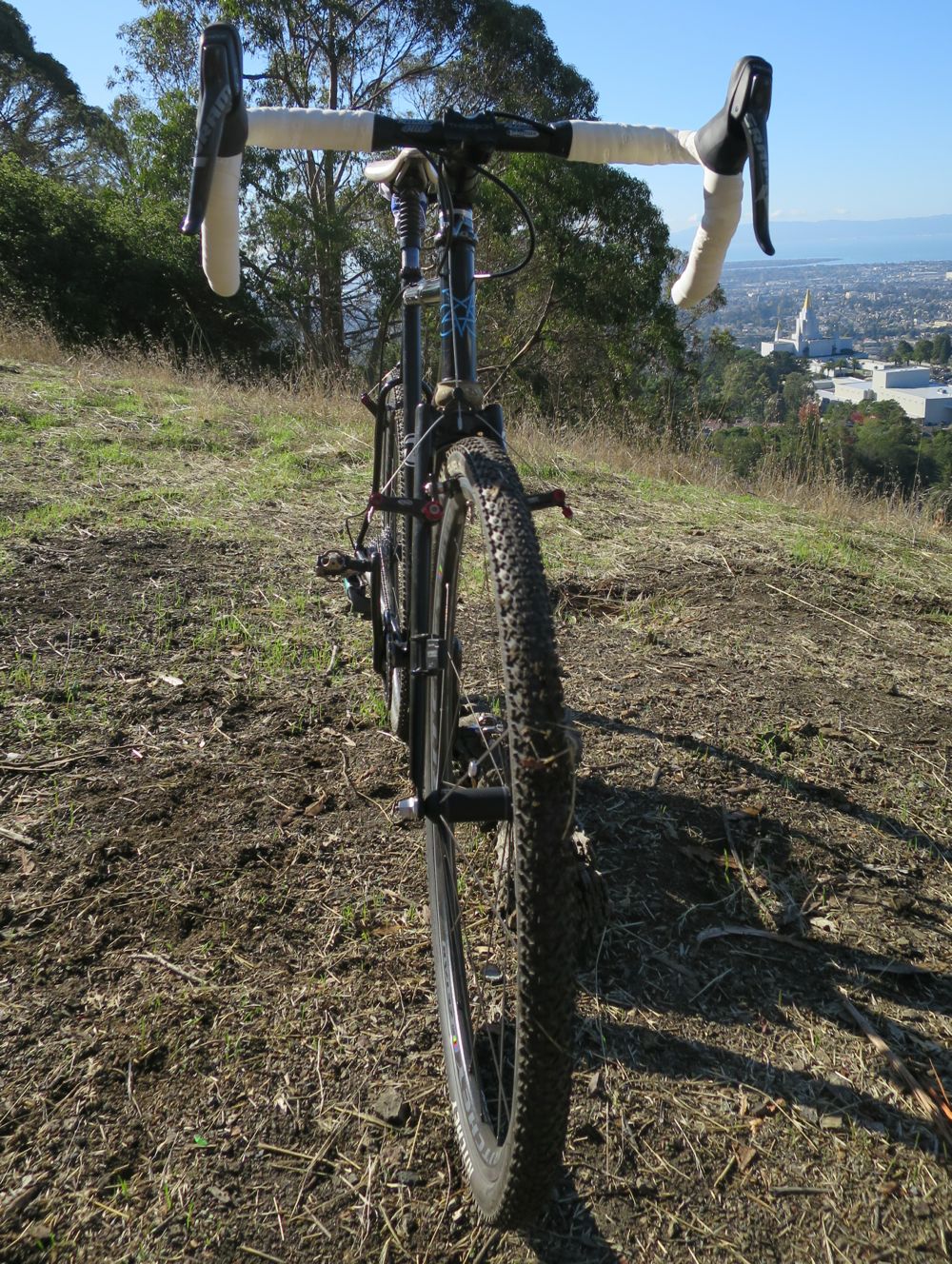 Holy crap, is this stuff nice.

Both the installation and fine tuning of it was super easy, and once the 3 mil allen headed limit screws (awesome touch) were dialed and the cable tension was set, it shifts with absolute precision.

During my maiden voyage I rode miles of game trails, and roads, and double track, and fire lanes, and singletrack, and rocky washes, and not a single time amid all of it, did the chain even hint at coming off.

As a long time member of the Shimano camp, what always impresses me the most about SRAM disco shifters is that I don’t second guess how to go about changing gears. I would assume that being as used to STI as I am, I’d instinctually revert to Shimano shifting technique, but I never do. Several years ago I wound up with a prototype Santa Cruz cross bike spec’ed out with various SRAM shifter bits and in that regard, I quite liked it, but this CX-1 stuff is a completely ‘nother level.

I can’t thank SRAM enough for their consideration, and I look forward to engaging in my breakout season, (at some point), thereby justifying their investment in me.

In time, and much like Gary, I will most handily be getting down to business.

9 Responses to “No, seriously. Let’s get down to business.”