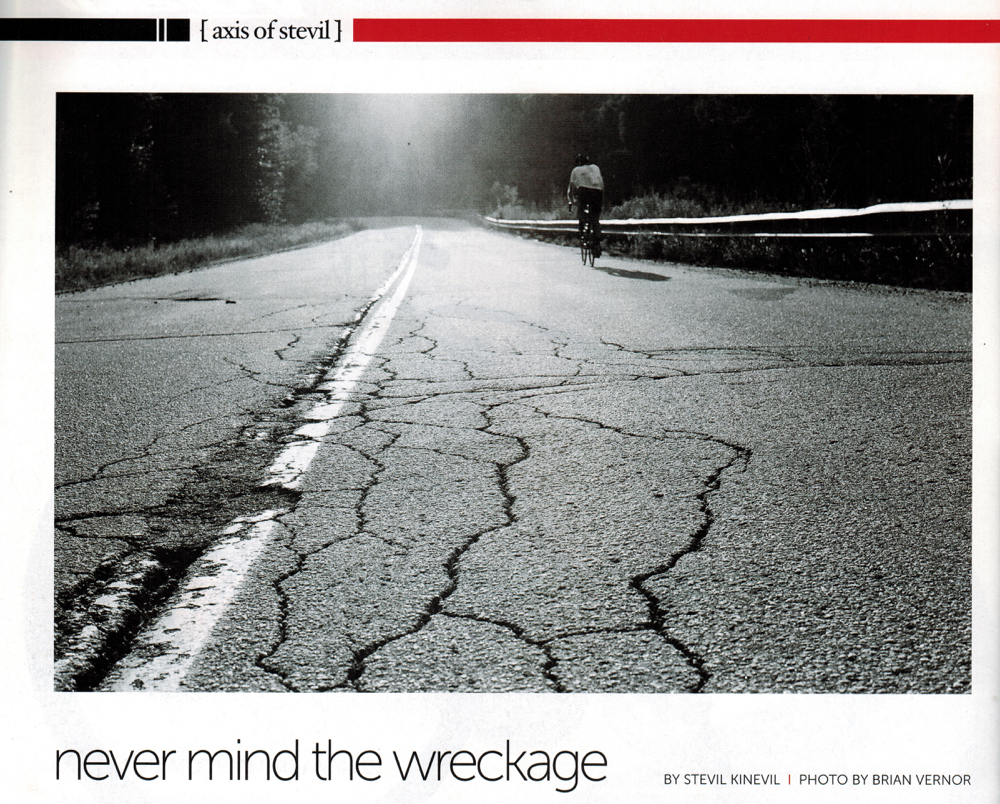 On a bright and warm October morning, I began my daily tasks as I usually do, which included some time at the computer. As I perused the web, I took note of what some see as Lance Armstrong’s house of cards finally starting its decisive collapse, and with it, thousands of armchair authorities launching their on-line hypotheses. I filtered through various perspectives- some being that of professional cyclists themselves, and others being anonymous nobodies, like myself. Of the dozens of theories and objectives that I read, for me they all had one thing in common. They failed to inspire me to give a shit. Much like watching the Denver Broncos play football with my parents as a child, I never found an interest in watching others do what I was very well capable of doing myself.

Of course this isn’t to say that at seven years old I would be able to play professional football, nor is it to say that at forty-two I have even an inkling of a glimmer of a wisp of a hope of making at as a professional cyclist. What I’m saying is I have always been one who prefers doing rather than watching, and getting wrapped up in drug scandals is akin having a stake in whatever it is the Kardashians are doing, which at this point, I’m not even sure they care about.

Certainly I have my opinions about what’s taking place with professional cycling, and the former Postal squad in particular, and my hopes of what might be the end result, but at the end of the day, I’ve never been a professional cyclist nor am I personally involved with any of those who are immediately affected. Back to the football (or team sports in general) analogy, when I see fans celebrating because ‘we‘ won this, or ‘we‘ won that, I can’t help but think to myself , ‘we‘ didn’t do anything. ‘They‘ did the work, and ‘you‘ watched while getting drunk and/or spilling snacks on the floor. I’m sure there’s some complex psychology involved which my B.F.A. couldn’t begin to unravel, but I suspect the short version is that people personalize the thing which they love and align themselves with, regardless of the distance of separation.

For millions Lance represented hope that an American could finally once again be competitive on an international stage. Like legions of others, I watched him win the 18th stage of the ’95 Tour and point to the sky in tribute to fallen teammate Fabio Casartelli, and I got goosebumps. For a quick minute, I was one of those throngs of hopefuls, but my celebration was short lived, because then I turned off the television, went outside and rode my bike.

I don’t think even a single one of us became interested in bicycles exclusively because someone else was making a career of it, the tumultuous relationship between pros, or the scandals and drama in or between the team camps and governing bodies. We all started riding bikes for the very simple reason that they provide an unparalleled freedom and what is the closest sensation most of us will ever know to flying. As the fallout continues to land around us, and the final card in that methodically built house has yet to fall, I suspect that the saga is far from over, but then again, maybe by the time this goes to print, it will be.

Either way, as the story unfolds, I will be apathetically watching it from the outskirts, and concerning myself with the only thing that matters. Being alone with my thoughts, appreciating having the use of my body and riding a bicycle.

4 Responses to “Call it a cop-out part nine.”