Yes. Yes you can.

“What does a handsome man-being who apparently has just showered have to do with that?” you might be asking.

I can say with certainty ‘probably something‘.

I also think that between lack of human contact, pharmaceuticals, inactivity, and a consistent level of discomfort, I think I may have completely lost my mind, so take everything I have to say with that particular grain of salt.

Getting right down to business, the clock is ticking on on the upcoming Lookout Challenge; Of course no event is legit without proper promotional content such as the goods that Malcolm T sent on to me this past Wednesday;

When the kids refer to stuff as epic®™©used without permission from Specialized Bicycle Corporation, I think that the Lookout Challenge is kinda the thing to which they’d be referring.

Well, that ho-down is in just eight days, so get your legs waxed and your liver taxed. It’s not going to be for the faint hearted.

Another person in our midst who flirts with honch-dom is baby daddy, former AHTBM team member, and blog contributor extraordinaire, Max Helllvetica, who very fortunately came through with another space filing saga;

Press play before reading. It’s good for you.

The Electric Wizard show was heavy, loud and very, very smokey (420). Holy shit. Maybe one of the best shows I’ve been to? 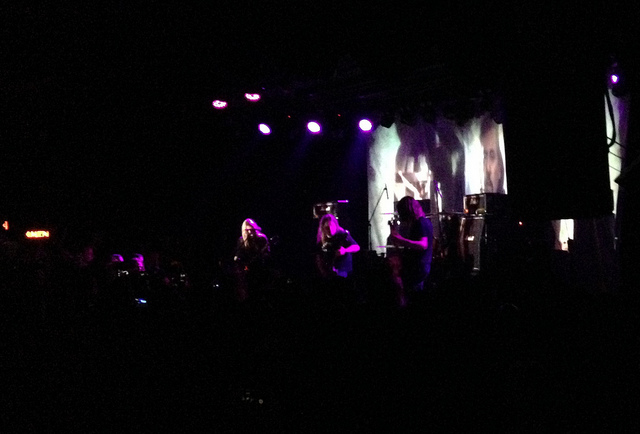 A little background info first, I attempted this race last year on my single speed big wheel mountaining bike, overused my patella by mile 140 and had to call it quits because I could not even walk without excruciating pain … 4 months of limping around feeling sorry for myself was the recovery course (this is very hard to do when you have a 6 month old, BTW). Rolled into Idyllwild at 5am on race day. Due to SPOT issues, we didnt roll out until 6:45, 45 minutes later than scheduled.This meant more time at peak heat hours in the desert; 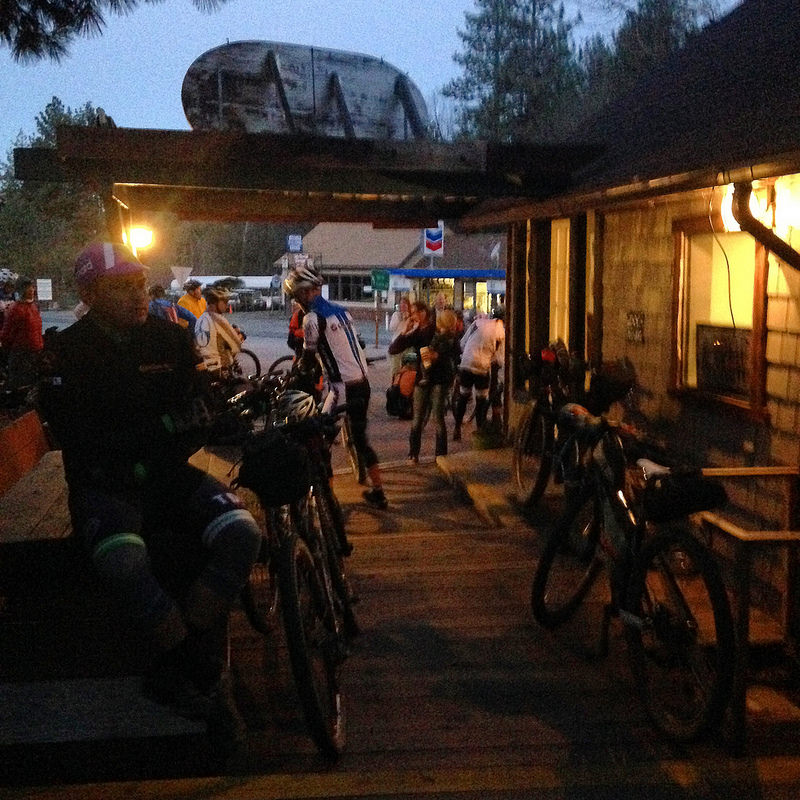 (my buddy Cache waiting to get going. He’s not only the best bike mechanic, but is pretty talented with the aerosol paint variety)

We rolled out, and almost immediately hit smooth mountainous single track. This was a really nice change from the previous year, where we just took the road all the way to the first dirt section (about 20 miles). Cache and I were with the front group and weren’t going very hard, just sticking together and riding our own race. We rolled to the burrito spot at mile 60 around noon. Good progress and the heat was pretty bearable so far; Tried to eat but just wasn’t all that hungry. Resupplied pretty quickly and got rolling by 12:45. As we were nearing the entrance to Fish Creek (this is possibly the hardest part on people, it’s a furnace of heat, and unrideable sand – it took us 8 hours to get through this 15 mile stretch last year!), I noticed my cranks were sort of wobbling around when I would stand and pedal. We pulled over on the road and noticed the cups were moving around in the BB shell (oh shit).

Decided to keep going and find shade in the wash and pull them off and see what’s going on; 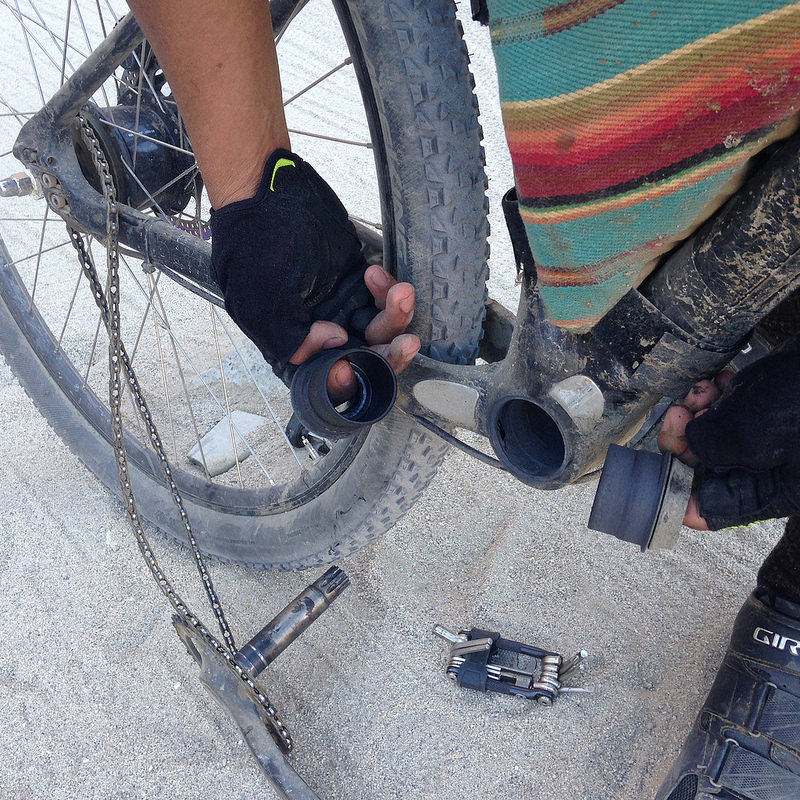 We stopped to pull them off near some guy who was just laying in the shade on some rocks. He said he wasn’t feeling good at all and was taking a long break. People already getting shelled… damn.

The bike wasn’t looking good … when we pulled off the cranks, there was a pile of carbon dust inside and this pretty massive hole in the shell that you could stick your finger through. Our speculation was, the press fit shell had some sort of micro play that allowed the cups to ever so slightly move around and over some time move enough back and forth that it ground down the whole shell. We could fit a PRESS FIT bottom bracket by hand. That’s how bad it was. Cache pulled out some duct tape and wrapped the cups to compensate for the horrible play. Seemed solid and I decided to not mash so much to keep from getting bad again.

We kept rolling … the desert was 95% rideable this year! The rains we had a couple of months ago helped. That boosted our spirits to not walk for 8 hours again! 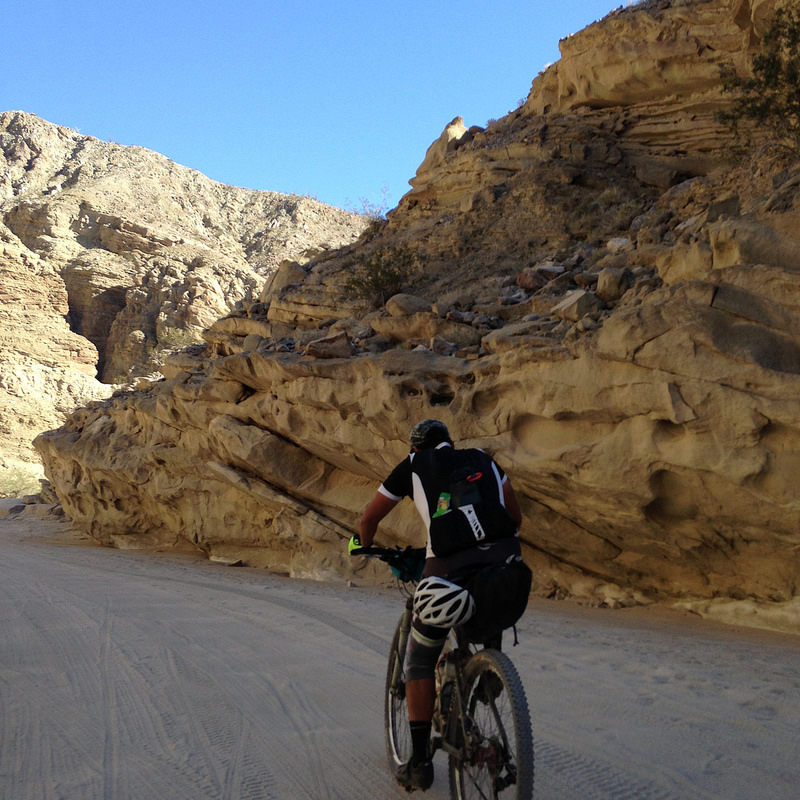 Diablo Drop … good thing we are good at hike a biking. We got out of the 15 mile stretch of hot ass sand and desert at 7pm. Making some really good time, I was stoked; 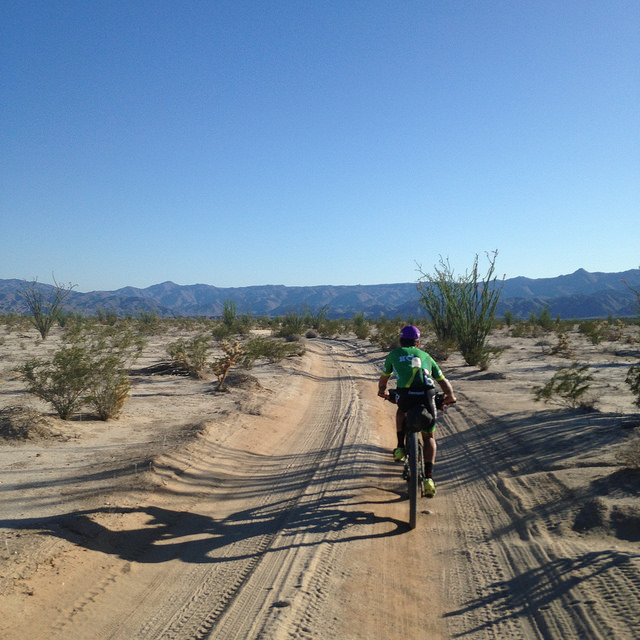 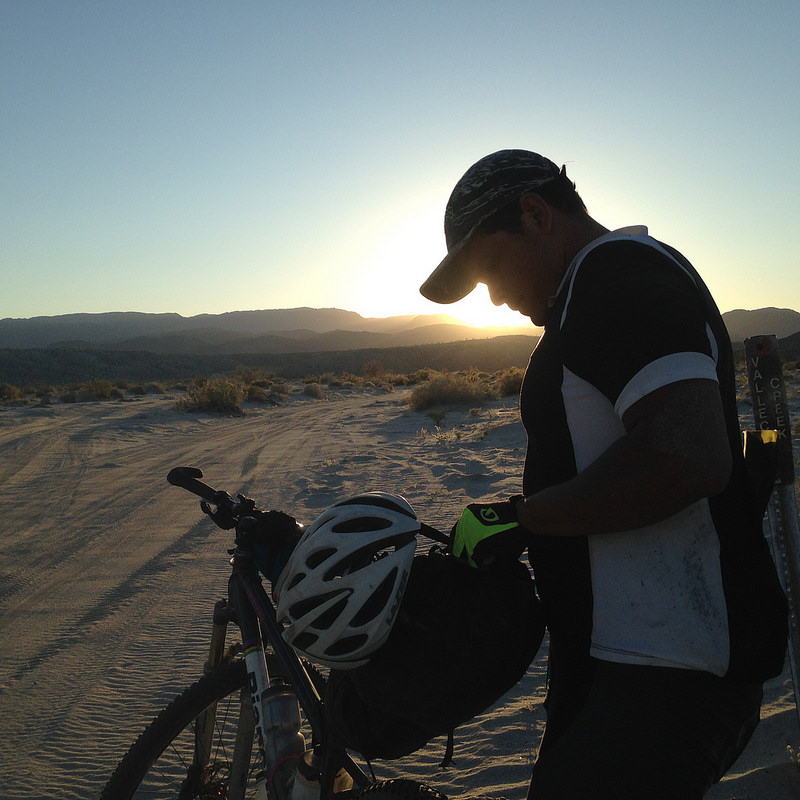 We cruised to Agua Caliente Market to take a break and resupply. 113 miles in already.

The place had some riders who came in a bit before us, some were looking really bad. One guy was puking, another was icing his knees and calling for a ride to come pick him up.

We decided to roll out by midnight and get Orriflame Canyon done before the morning (steep jeep road that spits you out of the desert into lush green single track) and it would be a lot of downhill after that.

Well, our plan to leave at midnight turned into us actually rolling out at 4am. We cruised down the highway to the entrance of the canyon … it was really strange. Not a single car passed us, and the quietness of the desert was sort of eerie. We started the hike a bike up Orriflame in the dark. This was a bitch, but I got to the top by 6am and just laid down next to my bike.

The wind at the top was really cold and I was beat from the walking, so I pulled out my sleeping bag and passed out. I woke up at 9am (!!!) because I was burning up in my bag. Damn! Jumped up and packed all my stuff to get rolling ASAP. I wanted to be farther ahead by this time, since the goal for the day was to get to Chula Vista which at this point was about 80 miles out. Really doable, but to make the 9:30 cut off to the ferry we would have to take, we needed to make up some time; 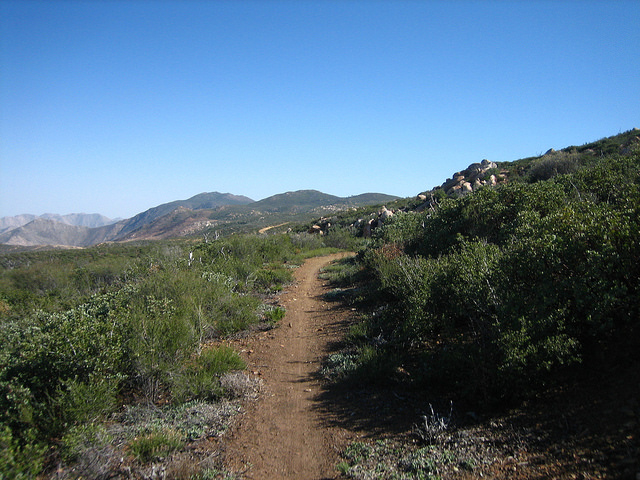 Cache right away told me his knee is killing him … his IT band was the problem. We regrouped at the bottom of the single track and he decided to call it quits. There was a town about 8 miles away and he would take the road there and have Erin pick him up. We said our goodbyes and I kept rolling. 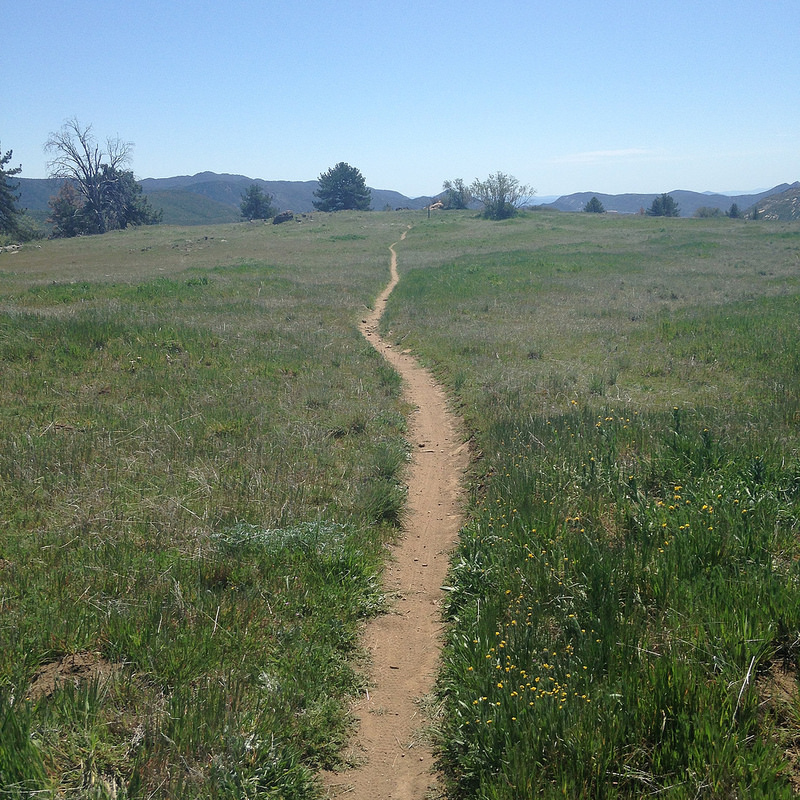 Got to Noble Canyon around 11am, called home and checked in with the wife and daughter, then started the epic single track out to Alpine; 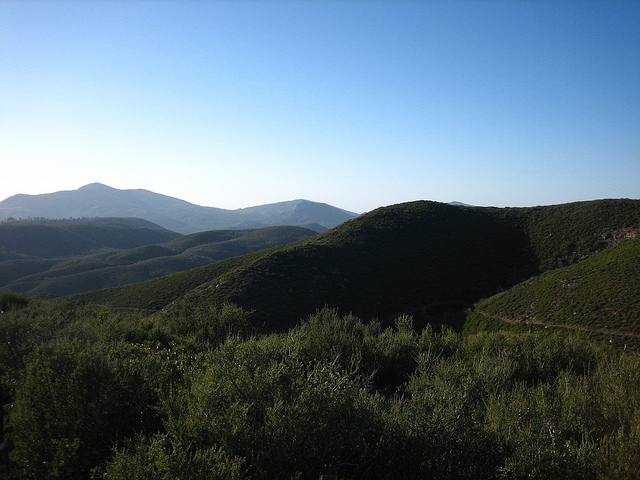 Every few miles I would come up on other riders who had gotten ahead of us while I slept, who were just wrecked. Taking naps under whatever shade they could find. Gave some guy some food as he was out and there was no resupply for another 20 miles or so. But I kept going; 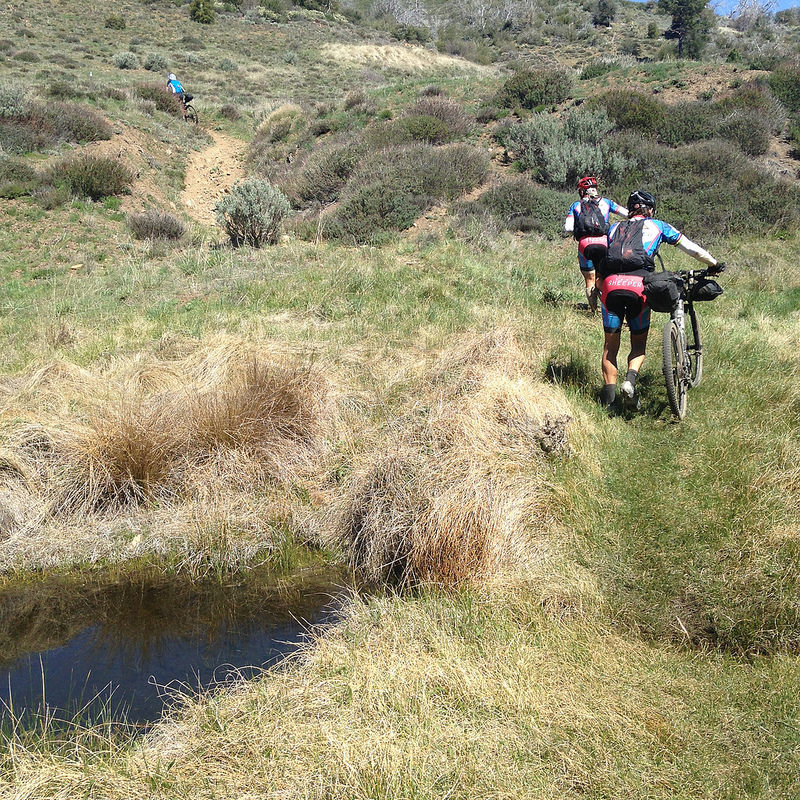 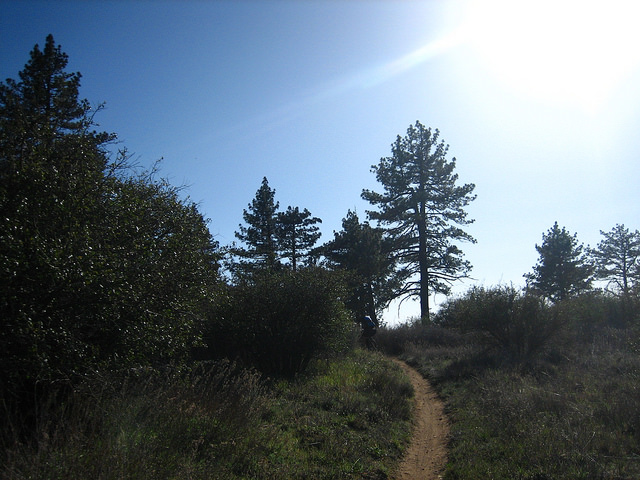 I rolled into Alpine around 2pm and my cranks were loose again! This was bad. This meant the shell was getting worse. I called Cache who had somehow managed to find a ride to San Diego from an ultra runner he met at a trailhead where we split off … I told him I was about 40 miles away from Chula Vista and if he thought I can keep going. He said “hell no.” Either your cranks fall off, or they will go through the bottom bracket area when you are descending. Neither a good option.

I sat at a Mexican restaurant debating what to do … this was a huge rainy cloud over my head. I had gotten farther than I did last year and I was about to have to pull out again. In the end: 38 finishers, 25 DNF’s.

Them’s the breaks. RIP bike. You were a good pal.

Fortunately the big S has a pretty killer warranty and sent me a new frame. 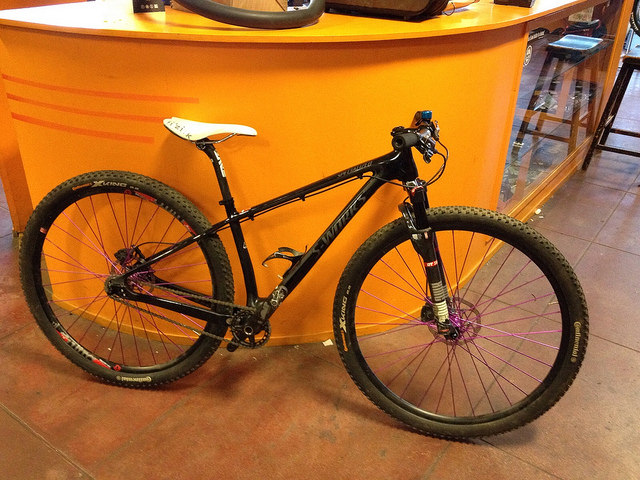 I missed you, one speed.

In closing, craziest shit you’ve ever seen riding a bike?

This is mine (graphic!); I’m tired just reading about it.

I do throughly enjoy having Max in my corner, because he is very good at both the story telling and the visual documentation that I so desire to maintain on the All Hail The Black Market project. I thank him for his time and efforts both on the bikes, and behind the computificator in making with the communication on the matter.

And funny he should finish that email with the query of the craziest thing I have ever found while on a bike ride.

Yesterday marks the 16th anniversary of the day a man named John Michael De Vega committed suicide, and I happened to be the unfortunate sap who found him. If you want the scoop, just scroll down a wee bit in that linked post. That’s kinda the short version; 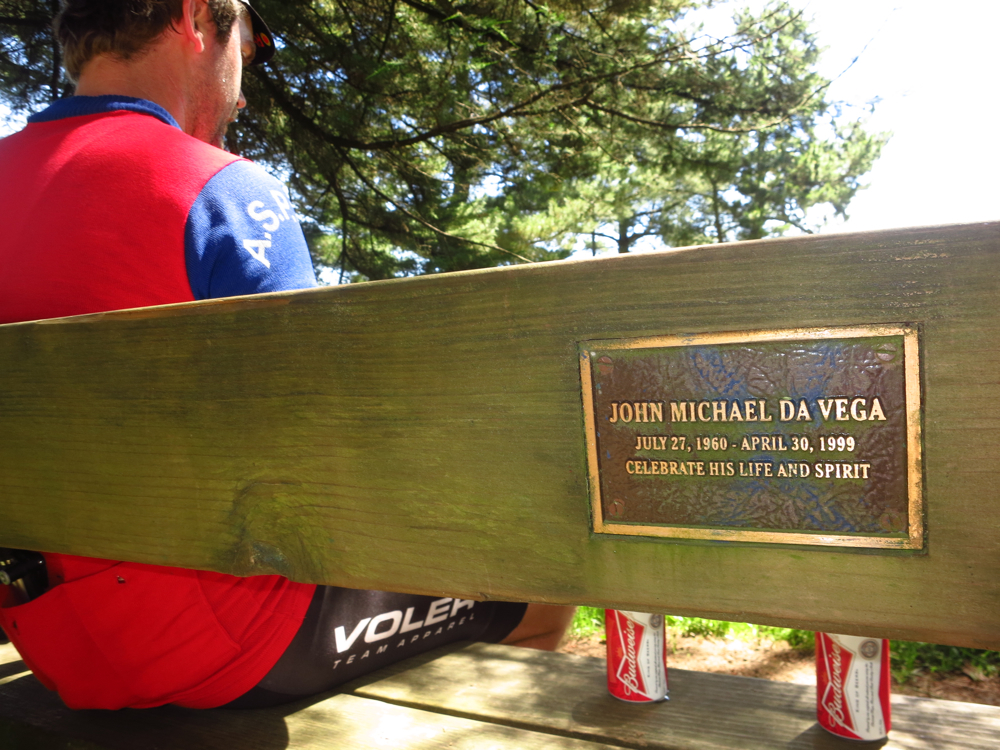 Thankfully those demons have been exercised, and I don’t trip on it hardly at all anymore.

Do I believe that to be the Dog’s honest truth? Just scroll back to the top of the post and ask the handsome man-being who apparently has just showered, and see what he has to gesture about it.

5 Responses to “Can you get tired of drinking obscene amounts of water and lying on the sofa?”