When last we were together, the grumpy old sage in me was regaling you with tales from the sea, or the mountains, or wherever.

As my journey around the state began, Bussman from New Belgium had driven up from Ft. Collins to fetch me; 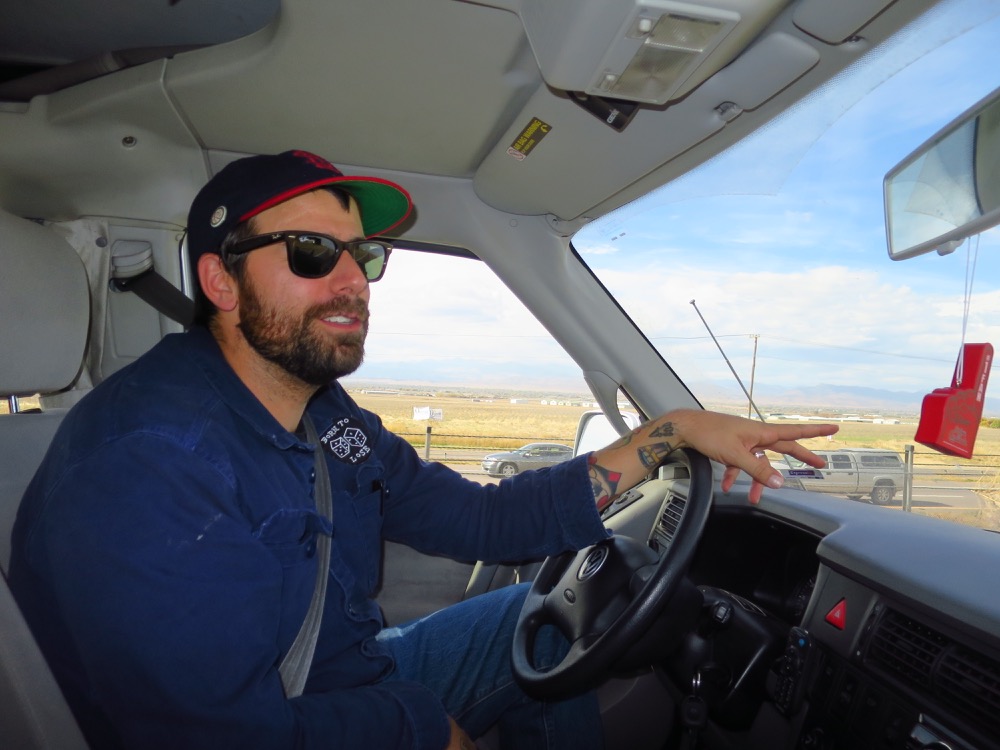 If you recall my last trip to Colorado (part one, part two, part three, and part four if you’d like to play catch up, which I recommend you do, because it really was some of my finest writing to date)- You’ll remember that the Bussman and I spent a fair amount of time staring out a windshield together, and never once got mad at one another.

Anyway, we ate some food, and talked shop, and before I knew it, he was kicking me out at the home of Swobo’s El Hefé, where said individual spends a lot of time standing next to the van with a look on his face that absolutely screams ‘so, why did I take this brand on again?‘; 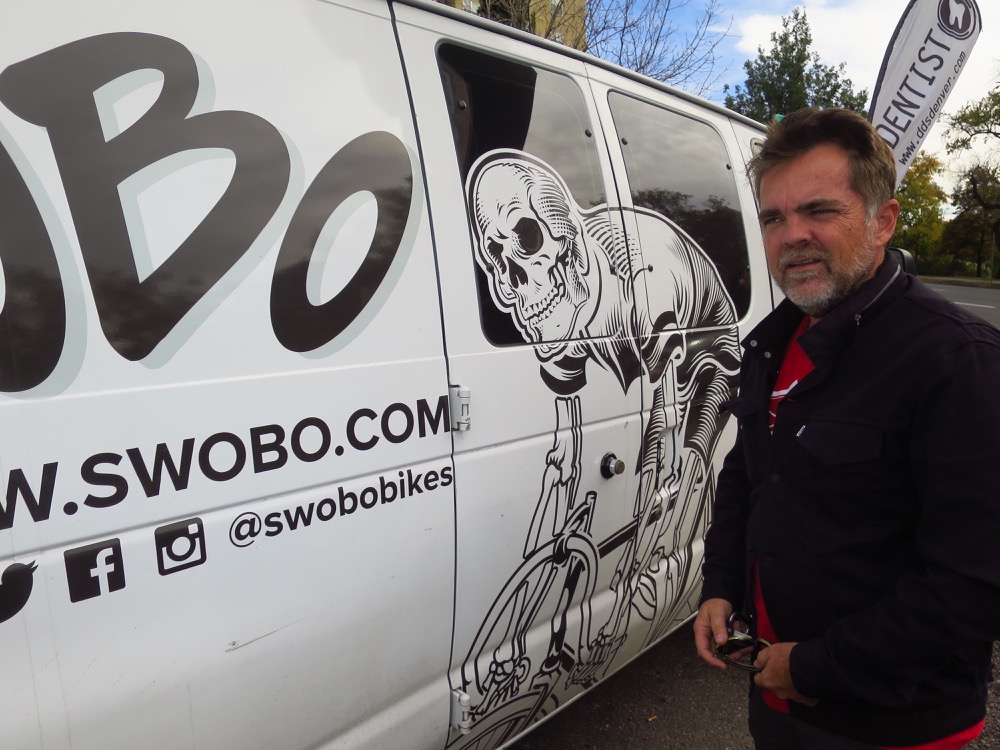 Anyway, questionable career choices aside, we had a good chance to catch up, eat some food, and burn some stuff with his on again/off again mascot/mechanic/whipping boy/ne’er-do-well/etc. Andy; 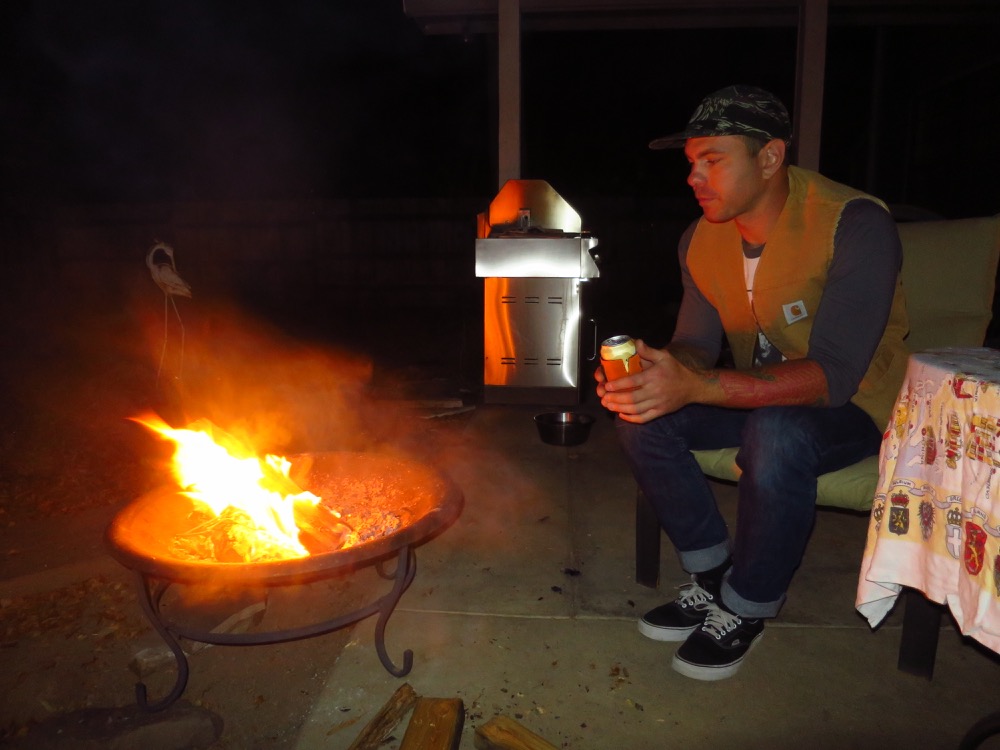 Late into the night, we sat there and stared into the fire in quiet contemplation.

After solving some of the world’s problems, we retreated into our respective corners and caught at least a bit of sleep before El Hefé and I were back on the road en route to Denver where he was going to dump me off into the arms of a friend named Allison who I’ve known in some capacity or another since the tender age of sixteen.

I went back to her house, where besides catching up with her family, breaking bread, and wondering repeatedly where the last thirty years have gone, I made both her and her old man pose while wearing my badass art party glasses; 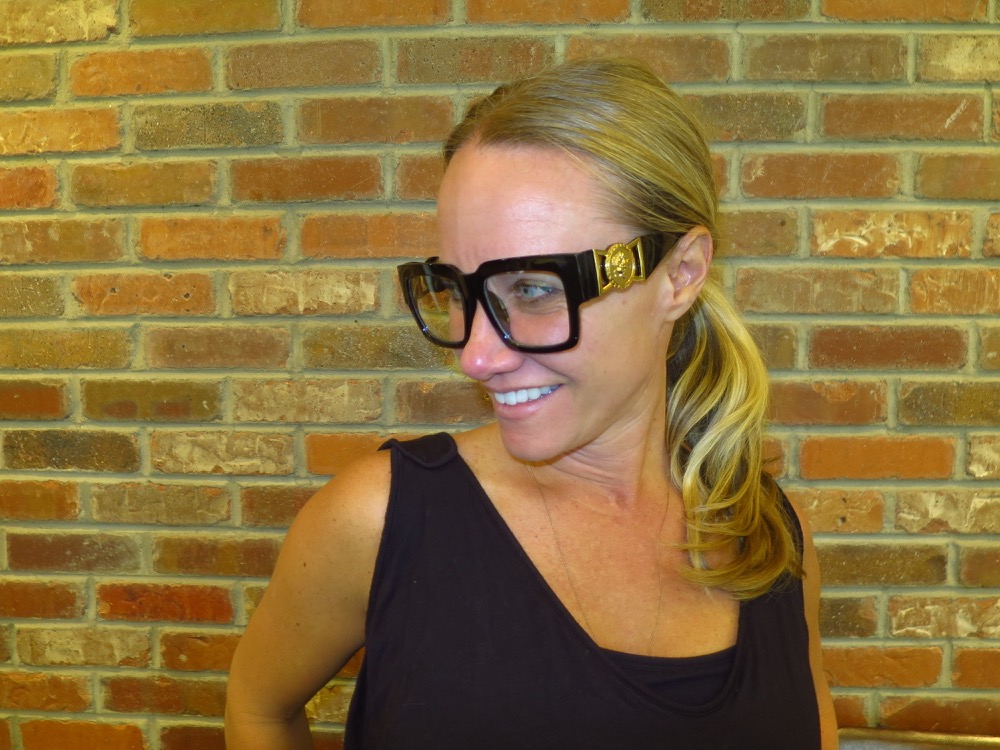 It’s a sign of a true friend when they will happily be saddled with the task of modeling eyewear generally only reserved for Jewish Italian mobsters.

After a rapid fire night in her company, the next phase of the trip was in order, which involved tacos and margaritas with this guy; 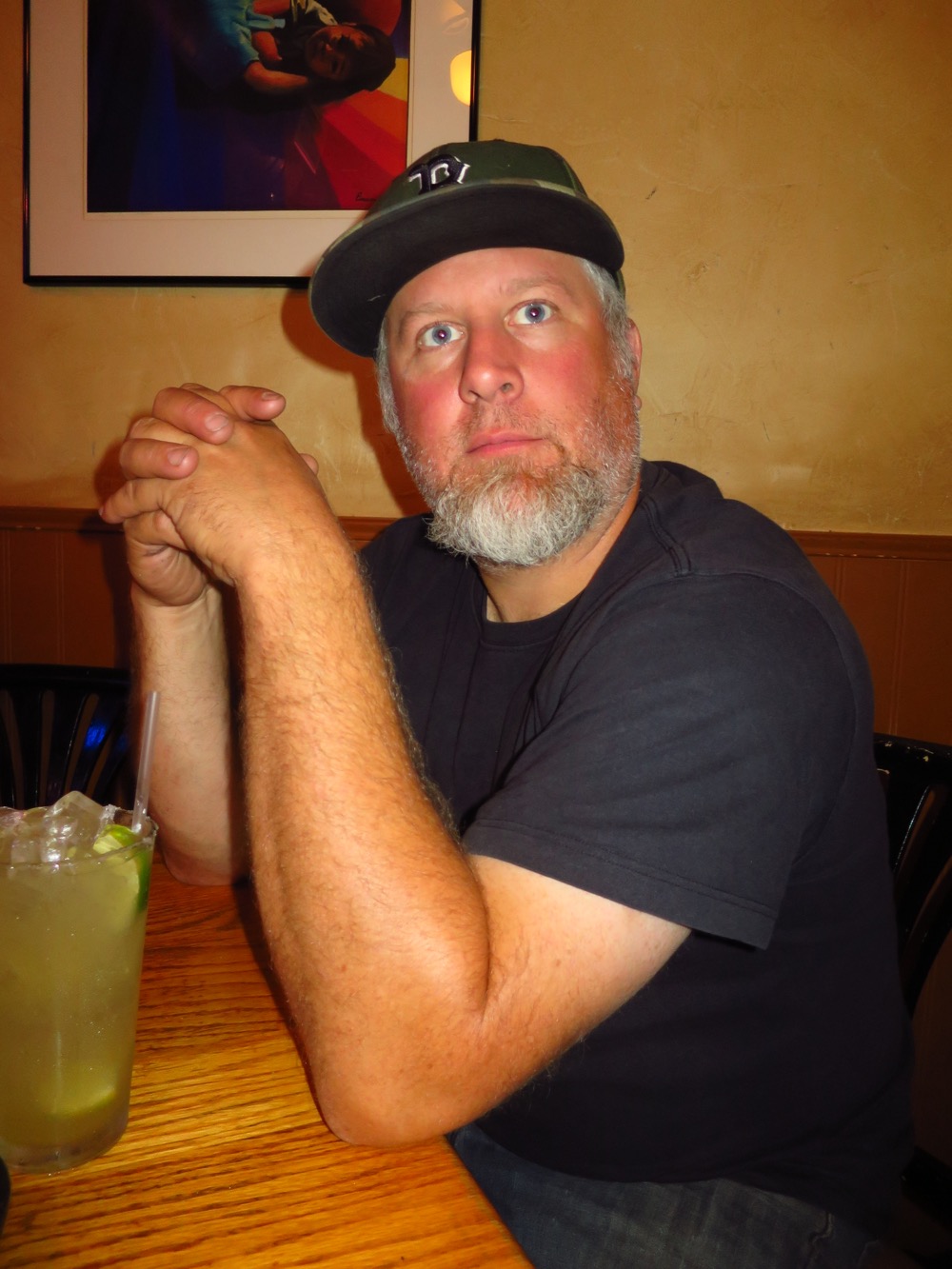 His name is Wakeman, and besides being one of the founding members of the Minneapolis Mafia, was integral in the inception and execution of the Surly Bicycle brand.

By the way, the fried tacos at Mexico City are insane, and in the bathroom there, you may or may not find a Carve Slayer sticker.

After lunch we shot back to his shop where we did other stuff; 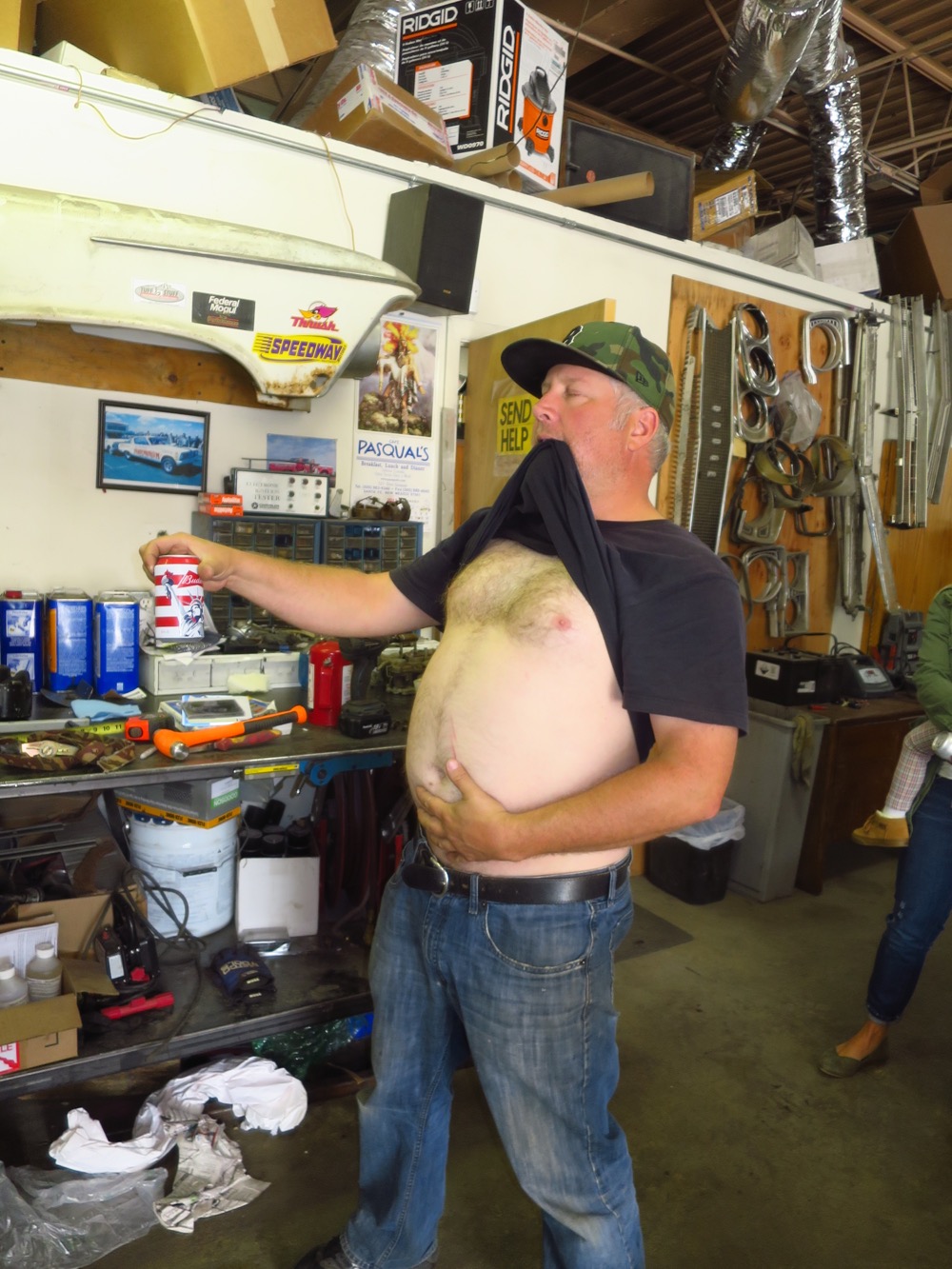 Right around this point, another old homie from way back arrived to scoop me up, and take me back with her to my dear old hometown of Evergreen.

I might remind you that this is the same person who I went back to surprise for her birthday two years ago, which resulted in me in my underwear, in the car of another friend’s mom.

You know… Just so we’re on the same page.

By the day’s end, I was three beers, three shots of whisky, five margaritas, and one shot of tequila deep, but was still somehow able to draw crappy tattoos on her kids; 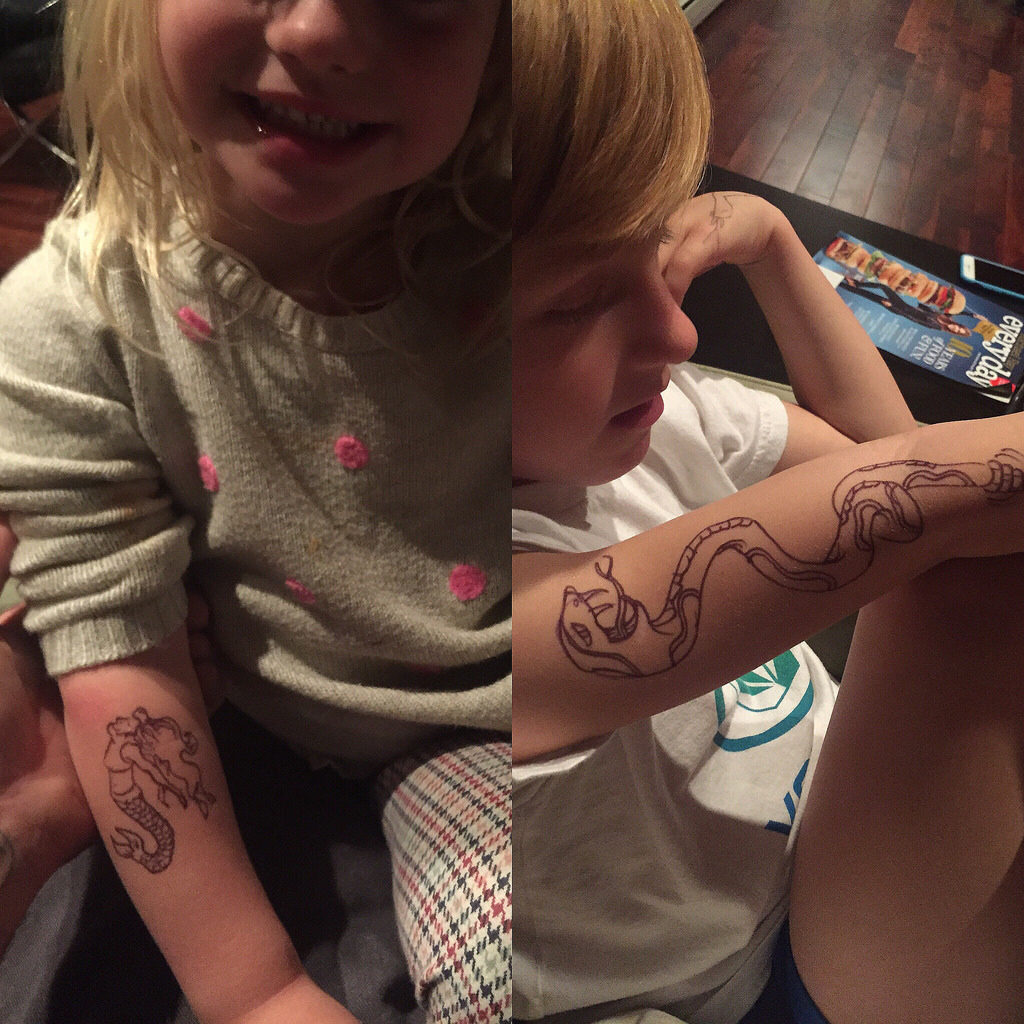 -As well as making her pose in my bad ass art party glasses; At this point, you might be asking “yeah, but what about bikes? I thought this was a bike blog… Bikes, bikes, bikes, whatever…”

We’ll get to that in a second. Always remember that there is sometimes more to life than just two wheels.

So wrapping up my time in Evergreen with a short tour through my various previous haunts, I returned to Boulderwheretheytakecyclocrossseriously in time to screw around a little bit with with this fellow; 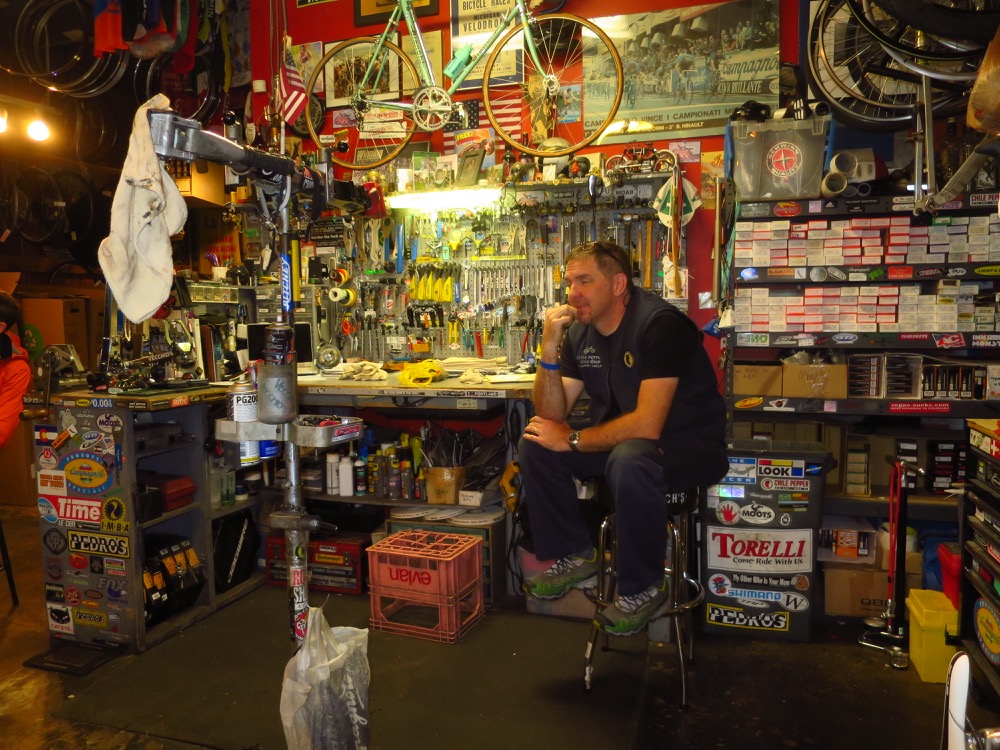 Anyway, we lurked around and shot the breeze with another couple cats, one of which was this guy, who snapped this pic; -Which I’m quite fond of because it makes me look like I don’t currently weigh 350 pounds. 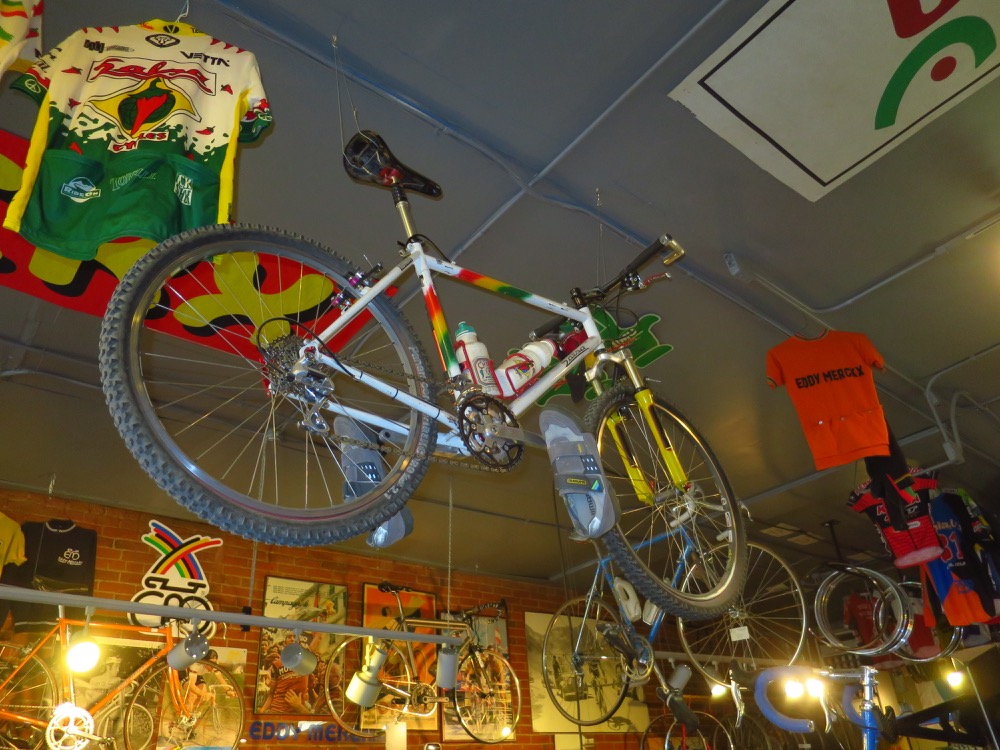 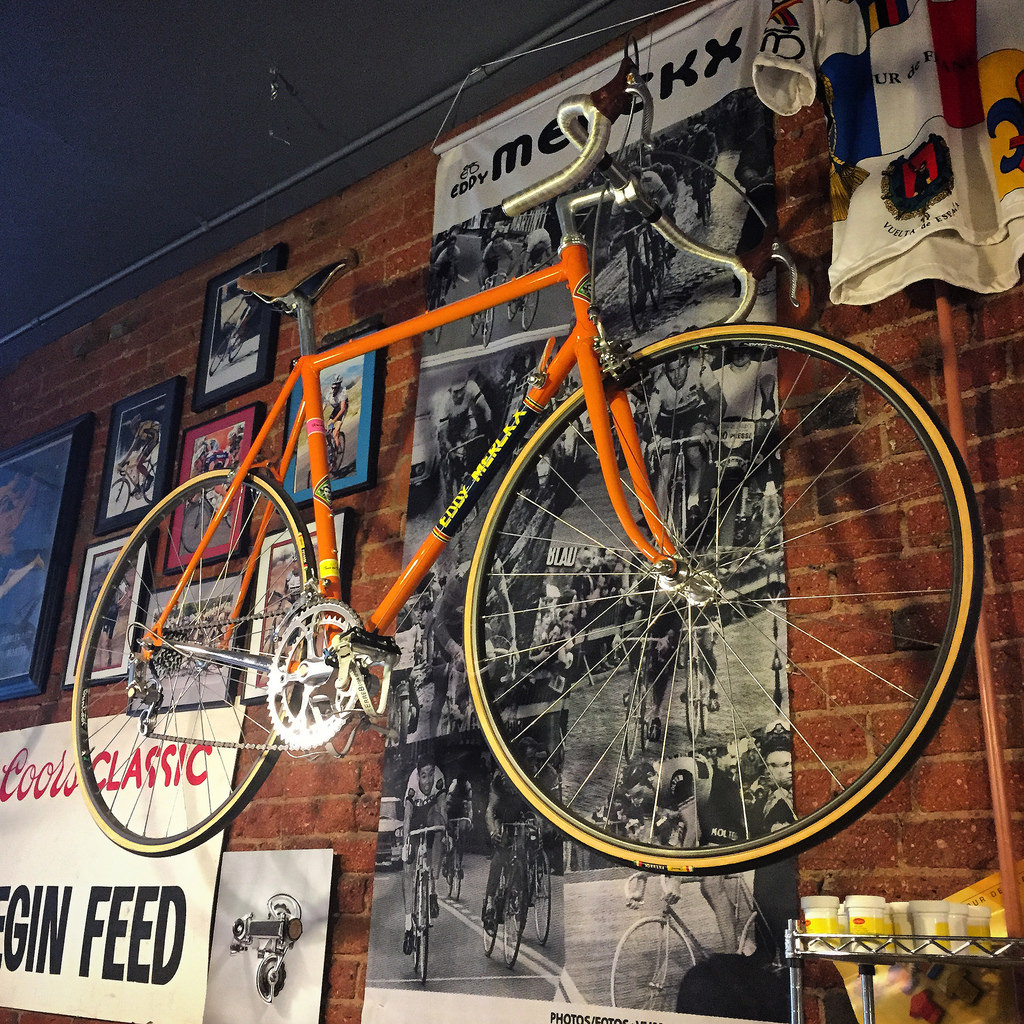 Holy macaroni, the places is a damned museum.

Oh, and they also have a bunch of AHTBM stickers; 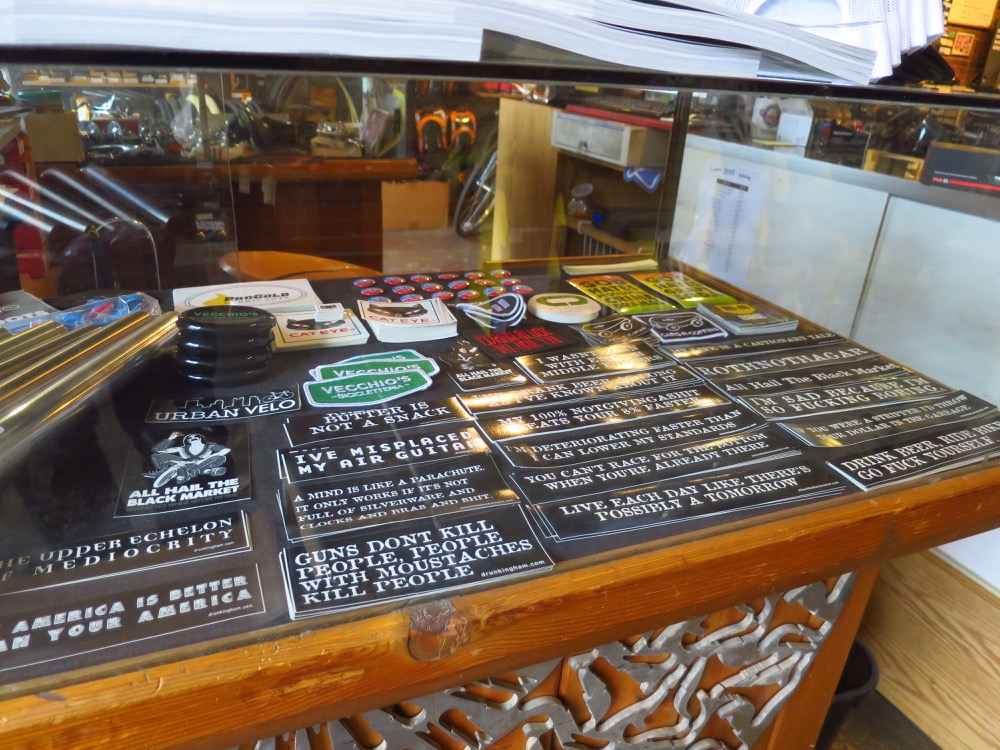 So if you’re local and you’re too lazy to go and get some goods in my store, stick your head in there to swoop.

After some time I beat feet out of there in order to meet up with this cat; 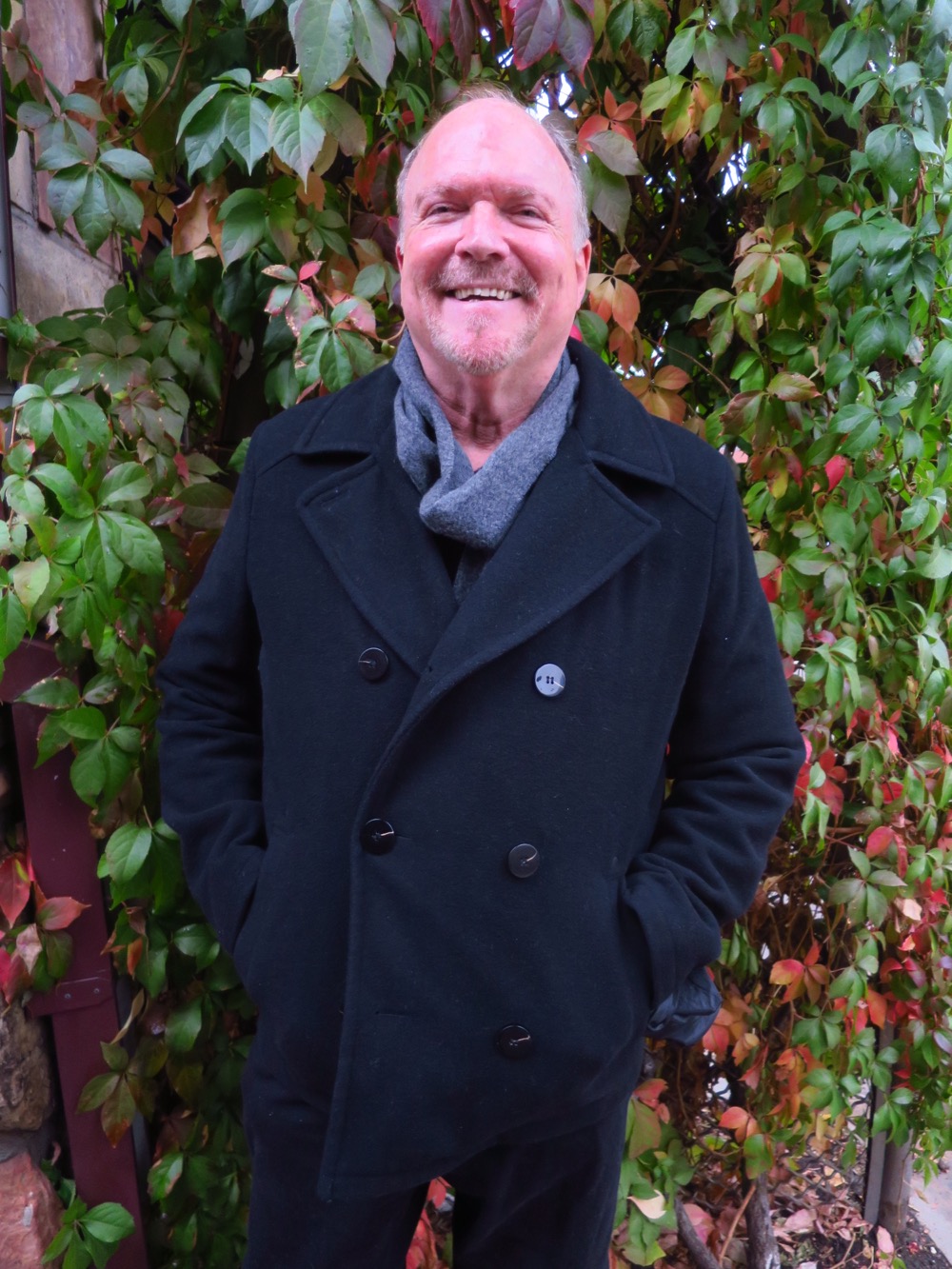 The most concise description for him I offered up on my Instagram account, so at the risk of plagiarizing myself, I’ll just copy and paste it here;

This fella was my photography teacher all through high school, but beyond being just an educator, he was an informal spiritual advisor, and a friend, and an inspiration. He taught me about art, and life, and the flow of the universe, all with a smile on his face and a tinge of cool headed apathy. His mark on my life as both an artist and a person was indelible. Today we shared a bite and caught up for the first time in twenty six years. AlRay, there aren’t thanks enough for the impression you’ve made.

He is an absolute peach of a human being, and I left our meeting with my heart and head full.

From there, I limped into a nearby cafe where I got fully caffeinated and wrote Friday’s post; 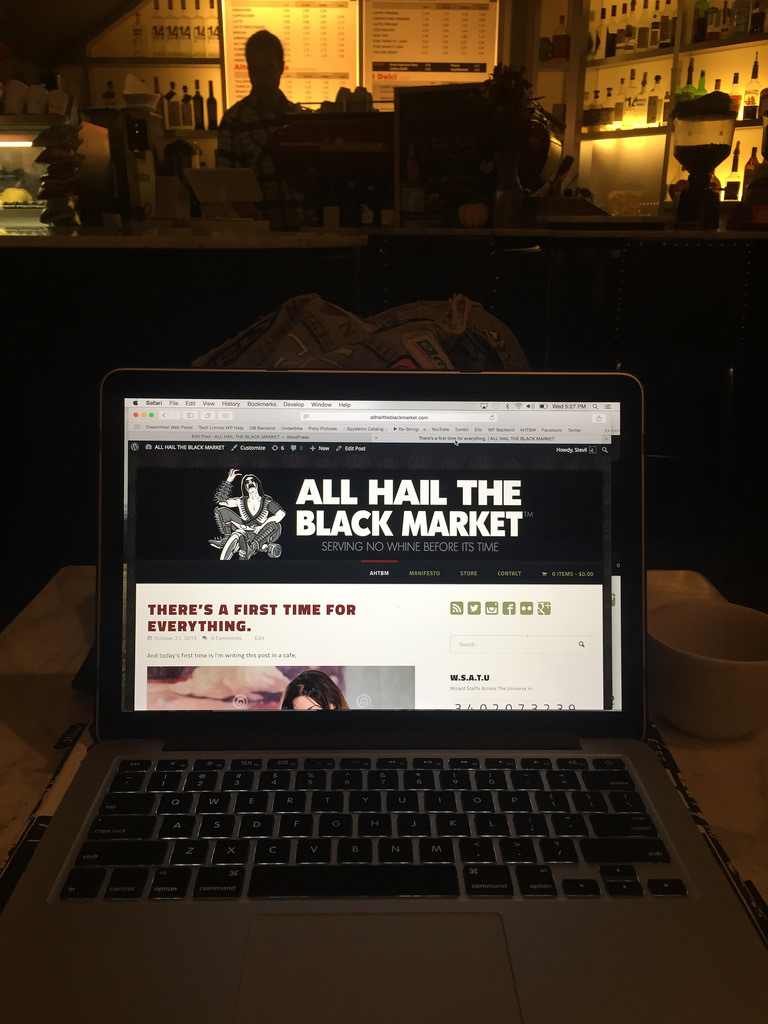 How’s that for a blast of Postmodernism?

Maybe it’s not at all. I throw that term around with reckless abandon and at this point I’m not even sure what it means.

Once work was done, I met up with a crew for dinner and then retreated to my buddy’s SJE’s house for rest, a tour of his garage where he’s proudly displayed 1998’s 370th Independent Fabrications’ dirt bikecycle frame; 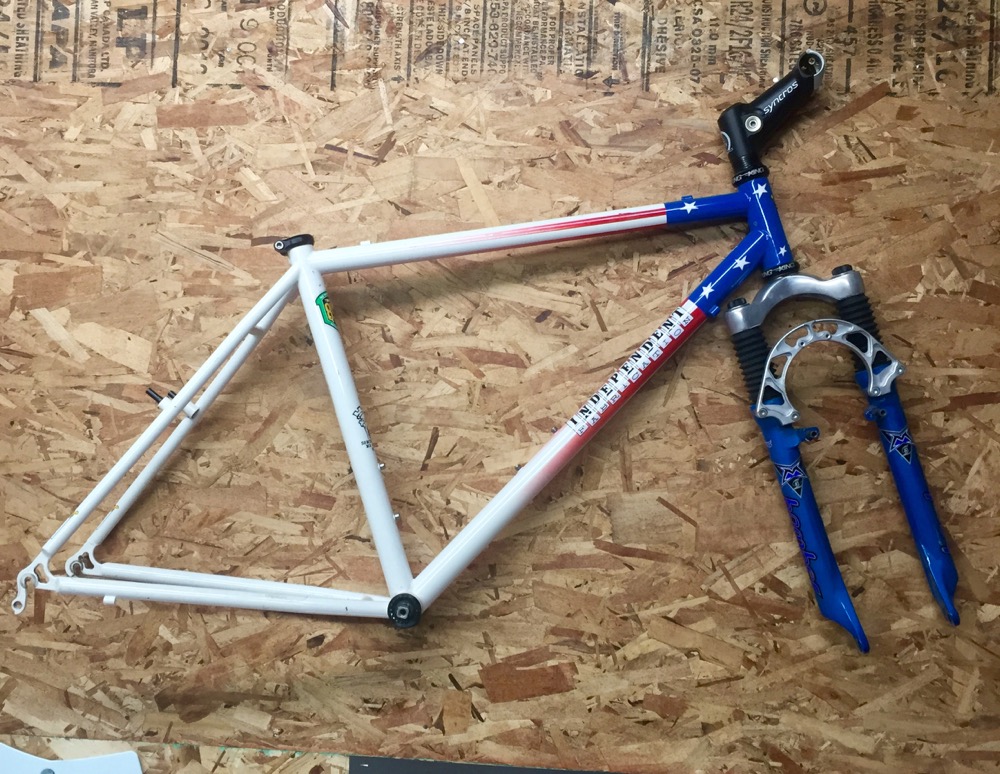 And at least one sweet shot of him in my art party glasses; 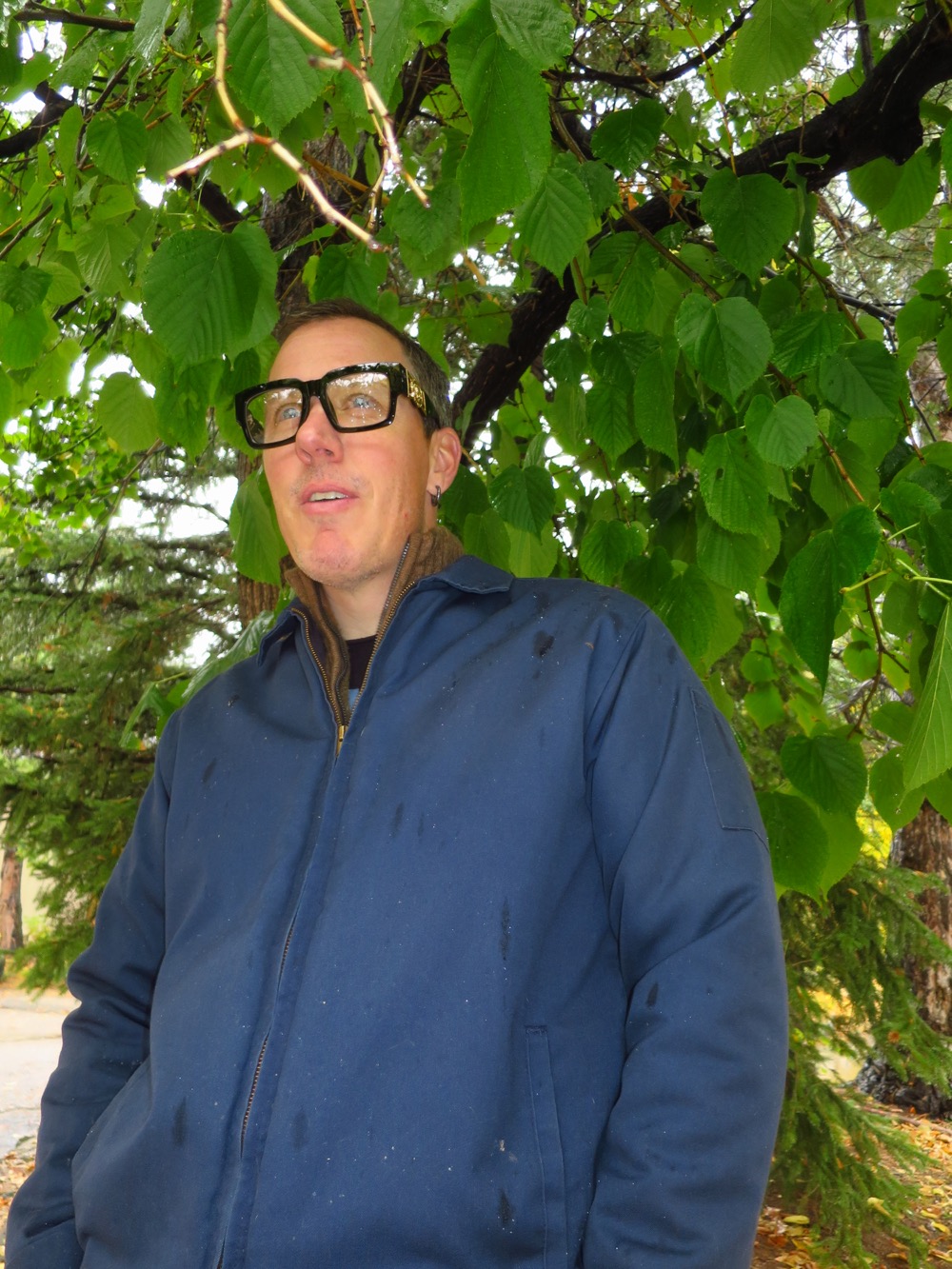 The sun was setting on my time in Colorado so Steve took me back to the Soulrun compound for a final evening with my hosts and a little bit of that white stuff; 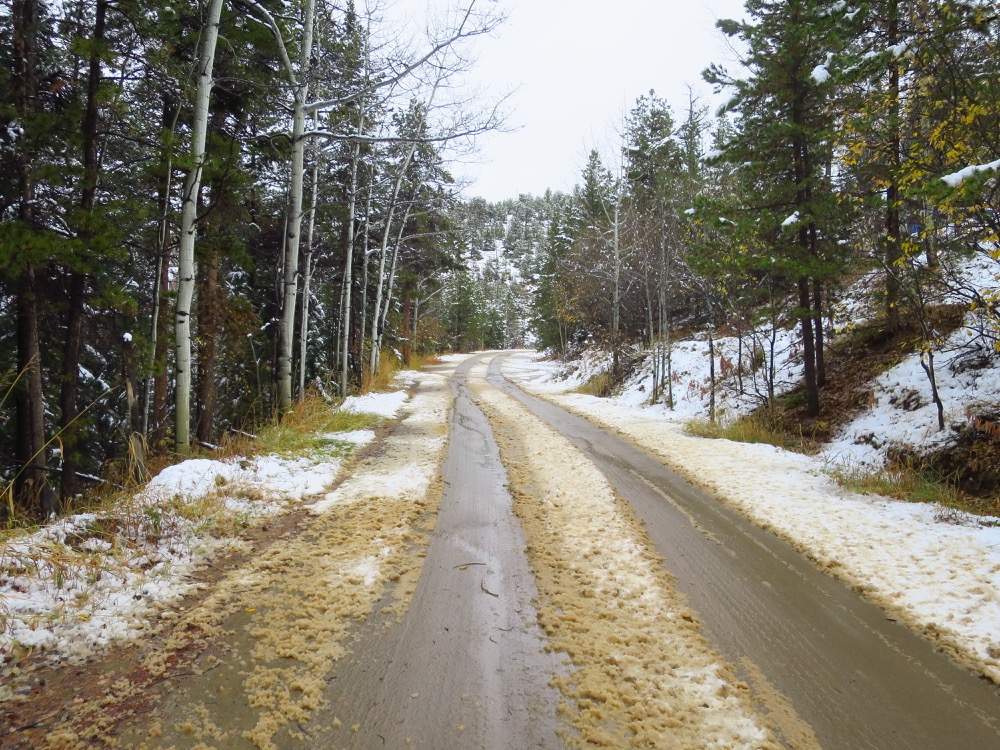 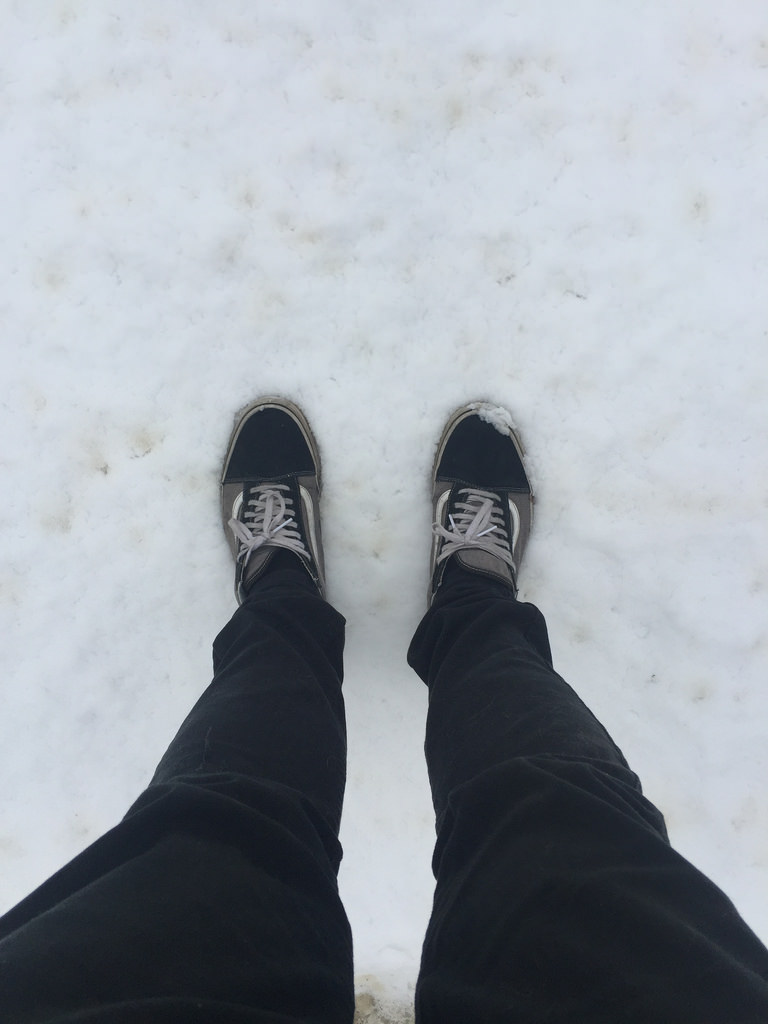 With my time in my home state finally at its end, I made it to the airport just in time to find I was sharing a flight with none other than James Hetfield himself; 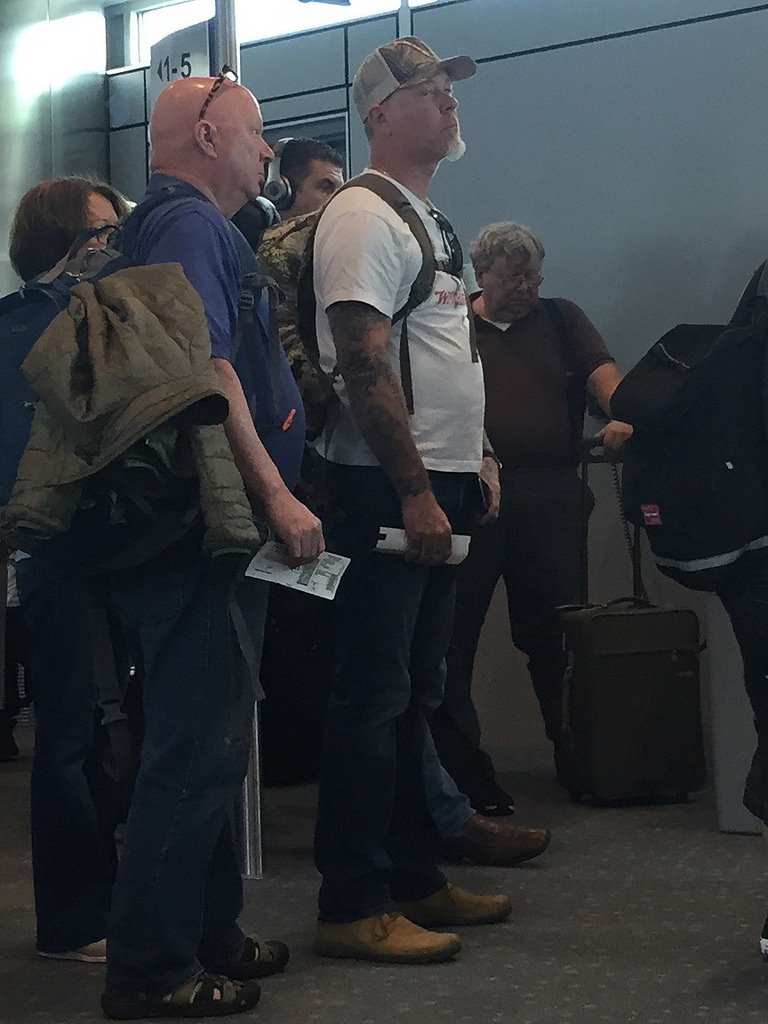 Walking past him as I boarded, I patted his left shoulder and just said thank you. I assume he knew I meant their first three albums specifically, and with the exception of Garage Inc., not anything they’ve done in the last twenty years.

So it’s with that, that I stroke my old man beard and thank Soulrun for sponsoring this journey. It was a truly memorable trip through my history and I hope you’ve enjoyed sharing it with me.

Now I’ll close the cover on my Colorado saga, lean back on the park bench, and tell you whippersnappers that it’s just about time for you to get the hell off of my lawn.