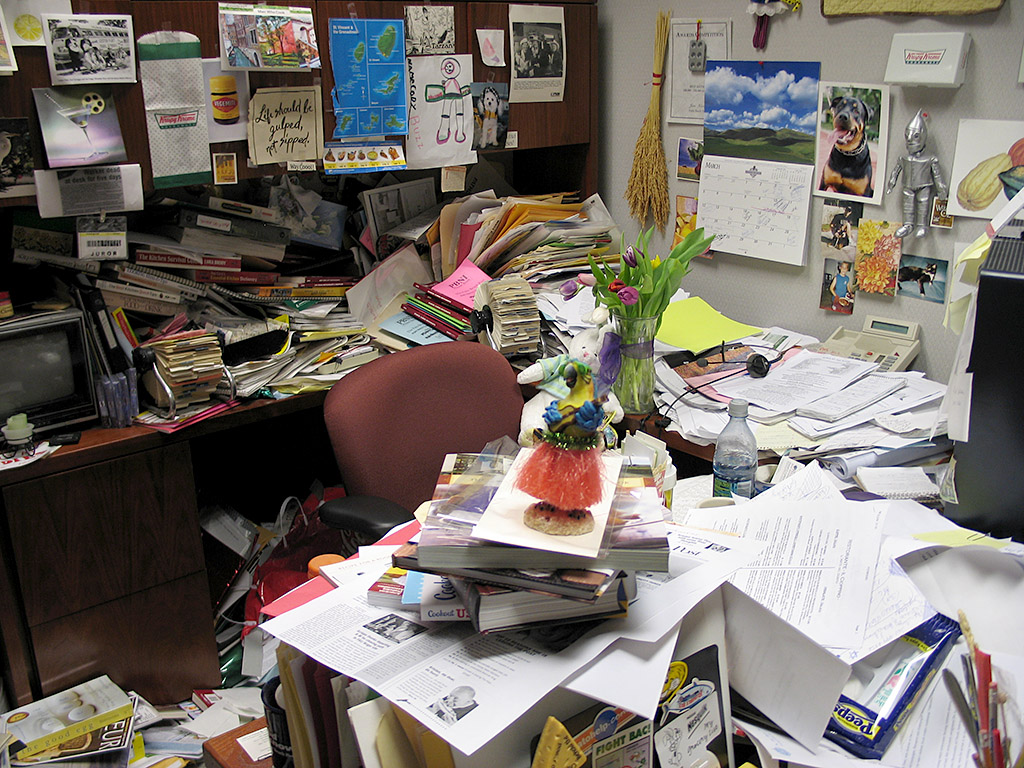 As illustrated with this post, I’m currently attempting to sort through both my virtual mail bag, and my literal one as well.

Continuing on with that directive, not only is today’s post going to be an effort in handling those tasks, but I’m going to also move an assortment of images I’ve had sitting on my desktop for weeks and weeks, because apparently when I came across them, I thought they were important enough to save. I’m sure looking at them now will leave us all scratching our heads. Anyhow, maybe you’ll think at least one of them is useful, and you’ll do something like print it out and turn it into a birthday card for your dad.

Firstly, I have a shot of Jason’s collection of wood up there in Canada; 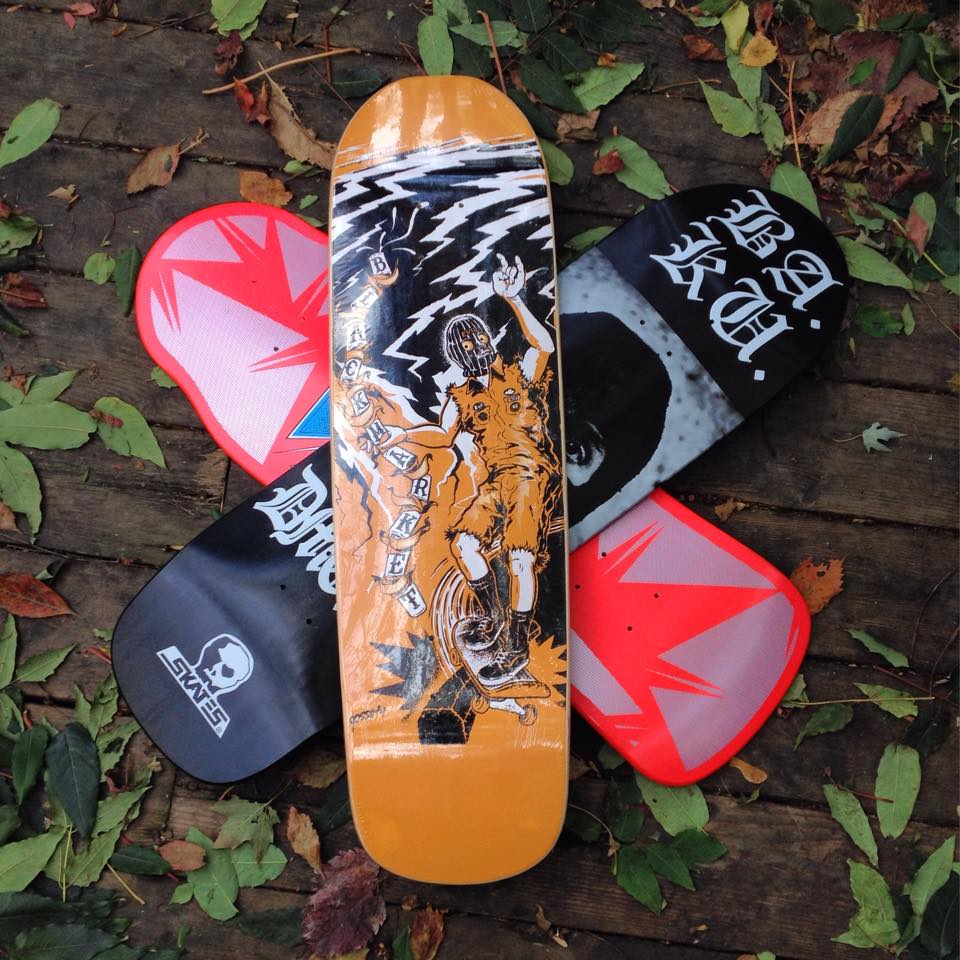 I couldn’t hope to be in better company. Not that I need to say it, but if one of them AHTBM/NWVSF planks could scratch your itch, all you gotta do is go here.

Then, for obvious reasons I’ve had this image sitting around for ages; 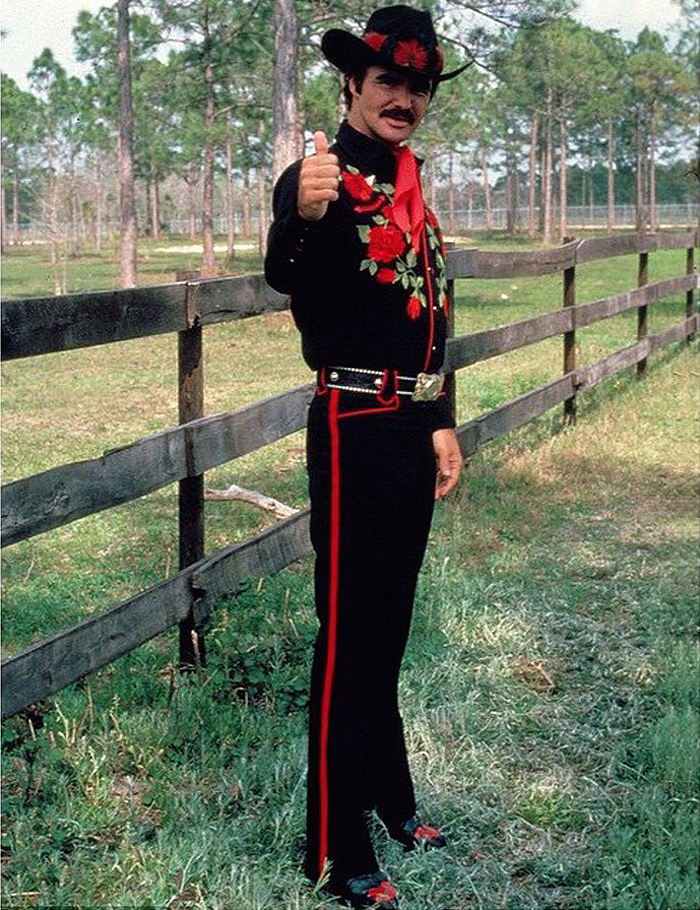 Similarly, the same could be said for this;

I don’t know where to find this ‘home of sexuals’ of which she speaks, but I bet it’s amazing.

In the world of feel-good stories, I got this one from Cosmo some time ago. It slipped through the cracks, and only just recently resurfaced;

Some time back (maybe a few years), you sent a package, I believe relating to fuzzy tennis balls, to a good friend mine Daryl, out here in Wisconsin. Because of the package I was introduced to your blog, and my bicycle received a nice sticker. Since then I’ve enjoyed what you’ve had to share, cycling and NONcyling related. And my bike has enjoyed a very fitting sticker!

Well, I owe you a huge thanks! Recently said cycling was stolen. A few Facebook posts with a pic and description were put out and shared and a police report filed. A few days later that same Daryl and another friend showed up at my house with my bike on the rack, stolen back! Turns out social media can help. A friend of a friend of a friend thing, recognized the bike and got word to my friends. Anyway long story short, it was your sticker that stood out and lead to this recovery! 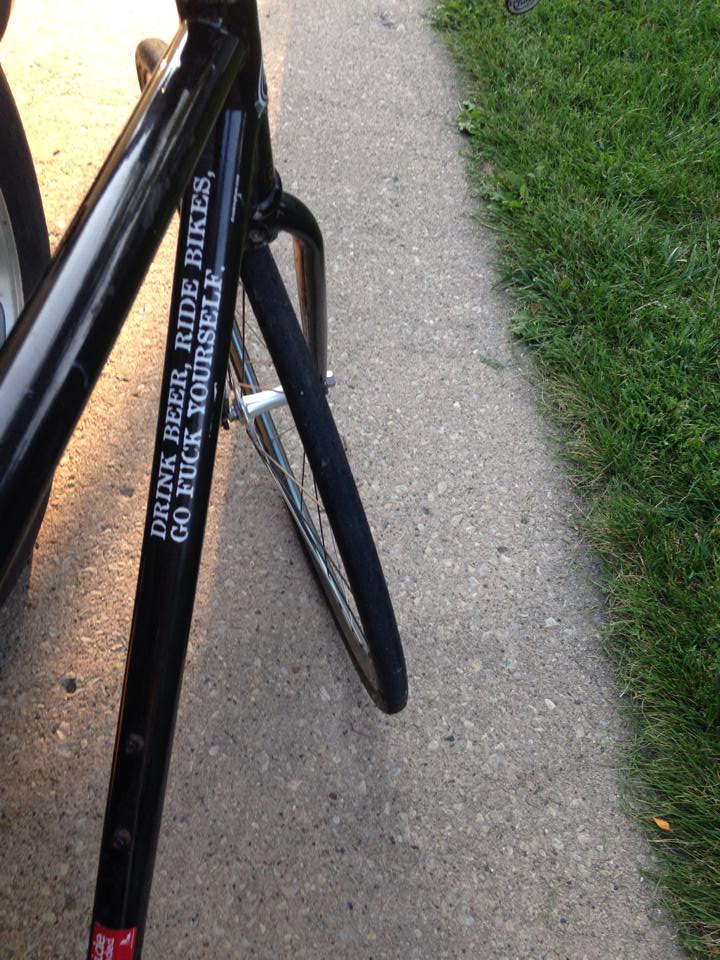 So I thank you for being there, for letting the world hear what you have to say and for the sticker!

Awesome post script (and maybe the point of this message): I feel you would have enjoyed being there as I struggled to describe a bikecycle to an officer that didn’t seem to care to hear about it. And watch him as I replied to “any distinguishing marks or anything to report as a brand name is lacking?” (small digression, bike was custom built from parts when I was a wrench at a bike shop). My answer “yea, a sticker in big white letters that reads, Ride bikes, drink beer, go fuck yourself” it was priceless!

I never thought any of the AHTBM stickers would actually serve a useful purpose. I couldn’t be happier that things turned out for Cosmo the way they did.

I would also be remiss to not mention I’ve just taken delivery of thirteen pounds of stickers; 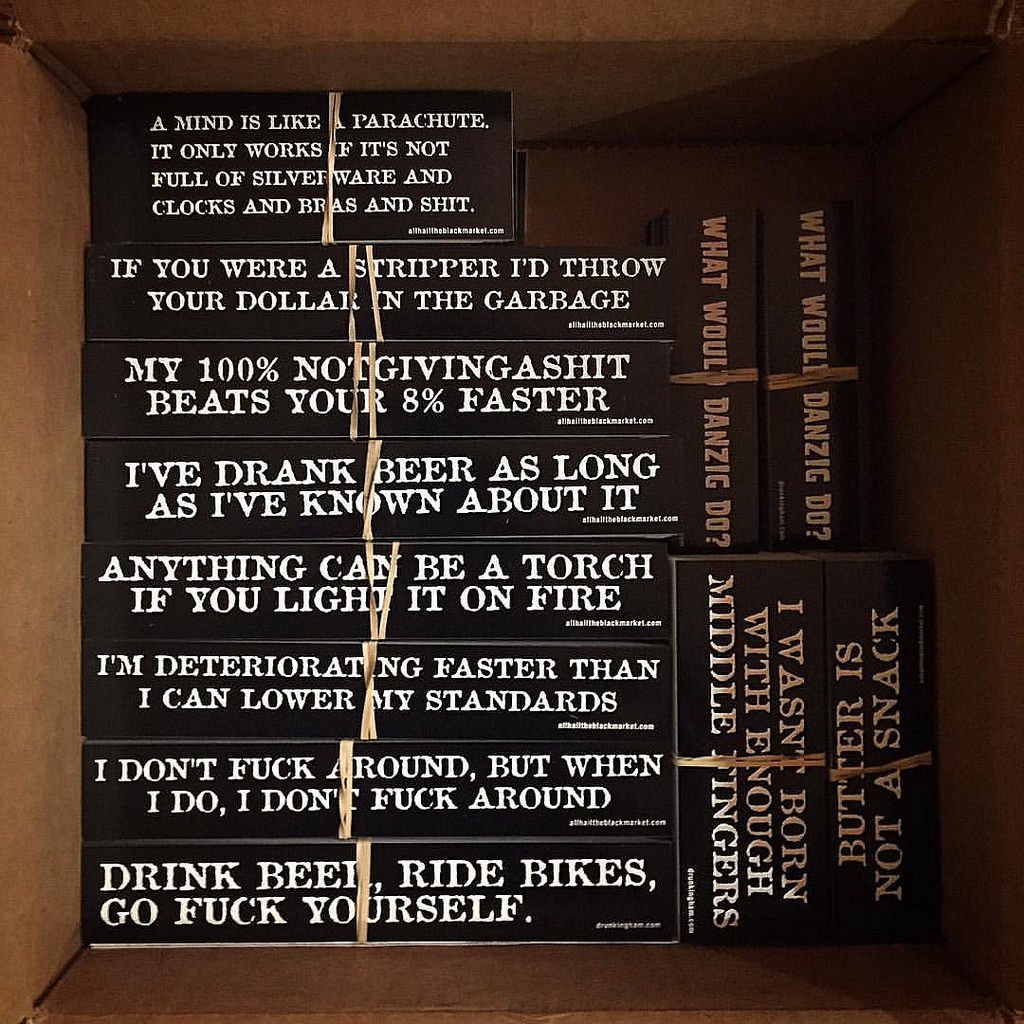 If these, or any of the designs I have available strike your fancy, shop to your heart’s content.

In other news from the mail bag’s bottom, Tyler sent along the following news flash which we could all do well to read;

A NIGHT OF HIGH-POWERED DRINKING LEADS MAN TO SLEEP IN A CHICKEN COOP.

Or you know… Maybe you don’t need to read it. The story is all pretty much there in black and white.

Speaking of which, a few weeks ago Chip made with the contact and asked if I’d do a drawing for some shirts he had planned for the Zank SSCX series out there in New England. I said ok, and eventually had something he approved of; Once the drawing was scanned and emailed off to wherever it needed to be emailed to, I promptly forgot about it and went on to other important tasks like brushing my cat, and isolating my abundance of bottom bracket creaks.

Well, I’ll be dogged if I didn’t come home one day to find a box of them shirts waiting for me; If any of these items would be a thing that you could see yourself wearing, it looks like Chip has ordering information right here.

Lastly and in other news of kind hearted souls, after waiting in line to do an array of shipping related tasks at my local post office the other day, I opened my PO box to find the following package from Spencer. In it, he included a very nice note as well as one of his new caps (customized with Pfaltzgraphic’s amazing KVLT logo); 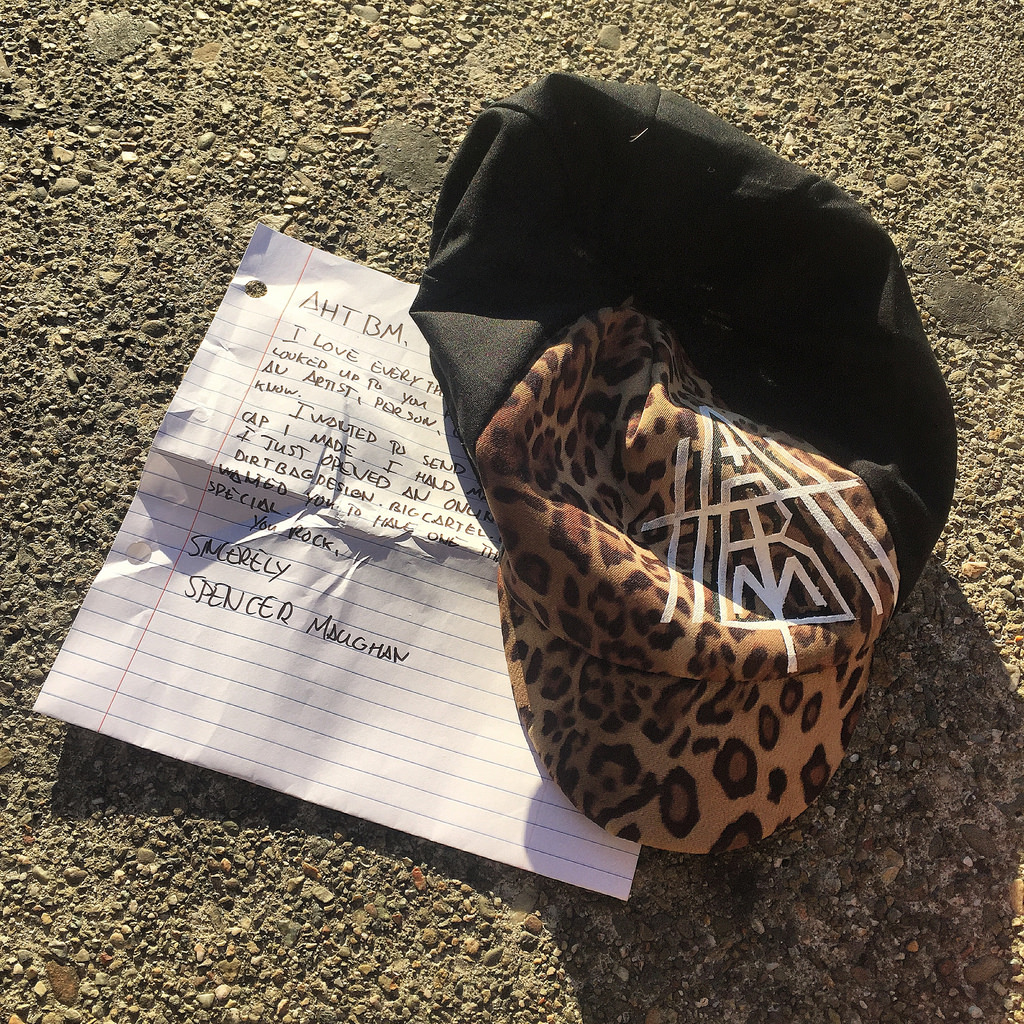 I very much appreciate Spencer’s kind words, as well as the cap he sent along. I’m pretty sure Chlöie will be stoked to get a crack at it.

If by chance you’d like to take a look at his store and see if there’s a thing what would make your dome pleased, hit up his developing Dirtbag Design store.

Now, it’s with that, that I have mostly sorta cleared my figurative plate, and tidied up my literal desk.