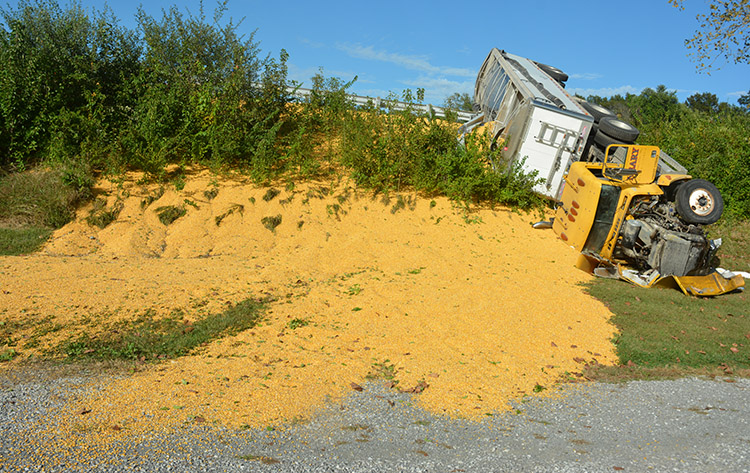 And once again, I apologize to Soulcraft Bikecycles for stealing the name of their email newsletter.

When you come up with something as catchy as ‘Here Comes The Corn’ however, you kinda gotta expect some appropriation.

Today we have exactly a half a crap load of mailbag nonsense. As I read in Cosmopolitan Magazine one time- One sure fire way to clear up the chaos in your mind is to clear up the chaos in your inbox, which I like to do from time to time. (both clean up my inbox as well as to read Cosmopolitan Magazine). I occasionally find emails to which I’d neglected a response ranging from light contact, all the way across the board to principals for Nairobian trusts, notifying me that my name has appeared in a list of individuals who stand to inherit millions.

Believe me when I say, when that windfall comes, you’ll never hear of me again.

Anyway- So as to not waste anymore time, let’s start at the bottom.

From Karen of Instagram and GRIT.CX, among other things, I got a reminder regarding a fallen comrade, which I felt compelled to give another go around to here;

Was just reminded of a good friend in a bad situation, and figured I’d invoke your broadcasting power… I know you get inundated with such requests, but hopefully this makes it to the top of the pile one day. You might even have seen this from someone else already.

Charlie Cunningham, legend and bike genius, had a serious crash back in August that has turned out to be even worse than it initially appeared. Head injuries suck. From his partner and legend in her own right, my Fairy Wheelmother, Jacquie Phelan:

“He fell off his bike Aug. 3, broke 7 or 8 bones, 5 ribs, left clavicle, and a pelvic bone. But the bashed helmet didn’t protect him from subdural hematoma which ‘deteriorated’ (grew larger) and now he’s incapacitated, but responding to commands, weakly giving a thumbs up, and can stand if two strong women hold him in position.
It is time for phase 3 of our Thrilling Carefree Life. In short, I’ve grown up.”

A friend started a Gofundme campaign for Charlie’s medical expenses.

It sounds like he’s improving, and Jacquie reports that they’re “hanging in there.” Charlie still needs heavy-duty in-home nursing care (provided by Jacquie and a professional) and lots of other costly medical stuff.

Thanks for all you do!
Karen

For those who might not be aware, this is Charlie; 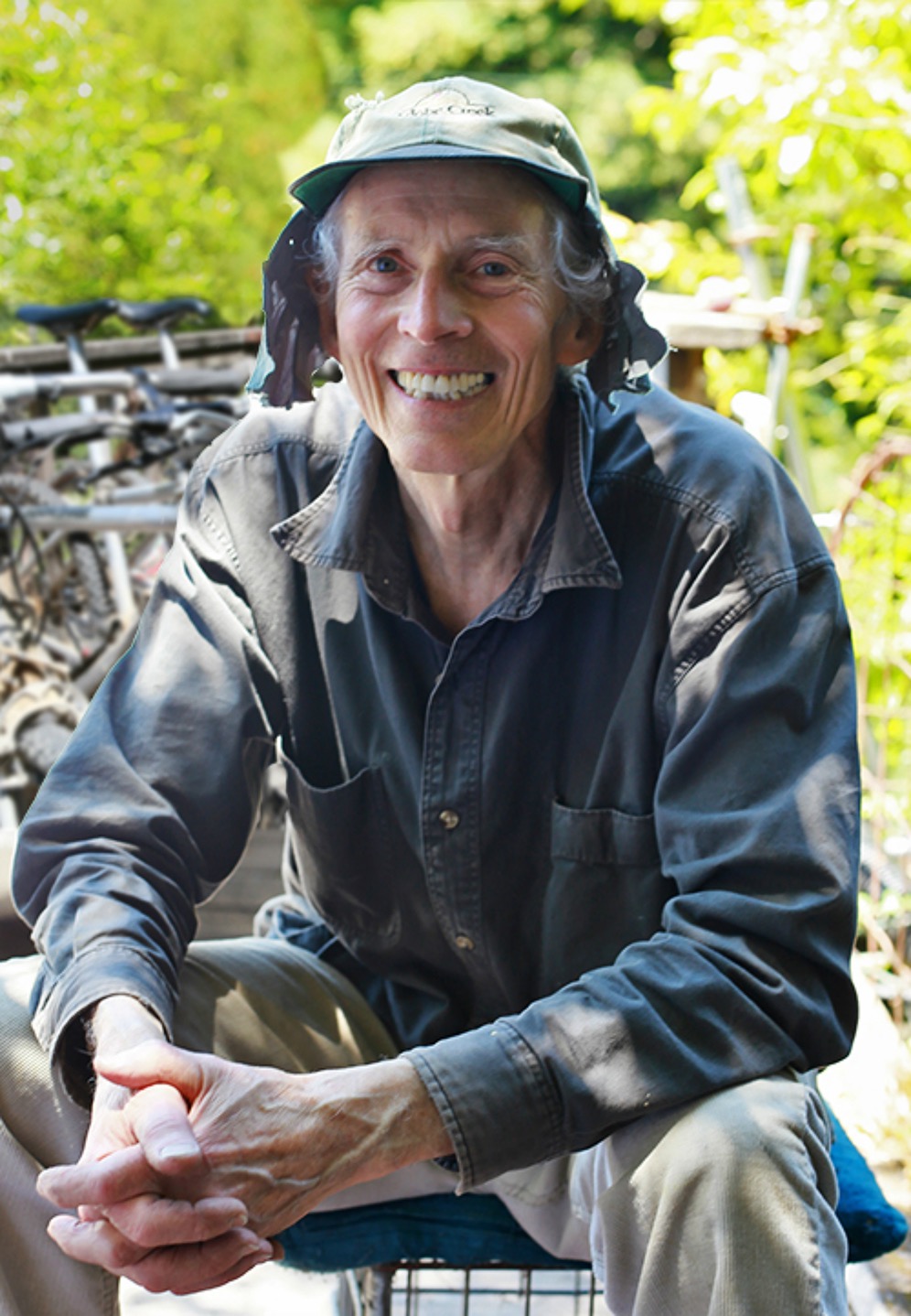 Besides being one of the founders of WTB, he’s responsible for a good many things that have either directly or indirectly contributed to the modern mountain bike, and then on top of all of that, is simply a very solid cat.

His bikes aren’t too shabby neither; 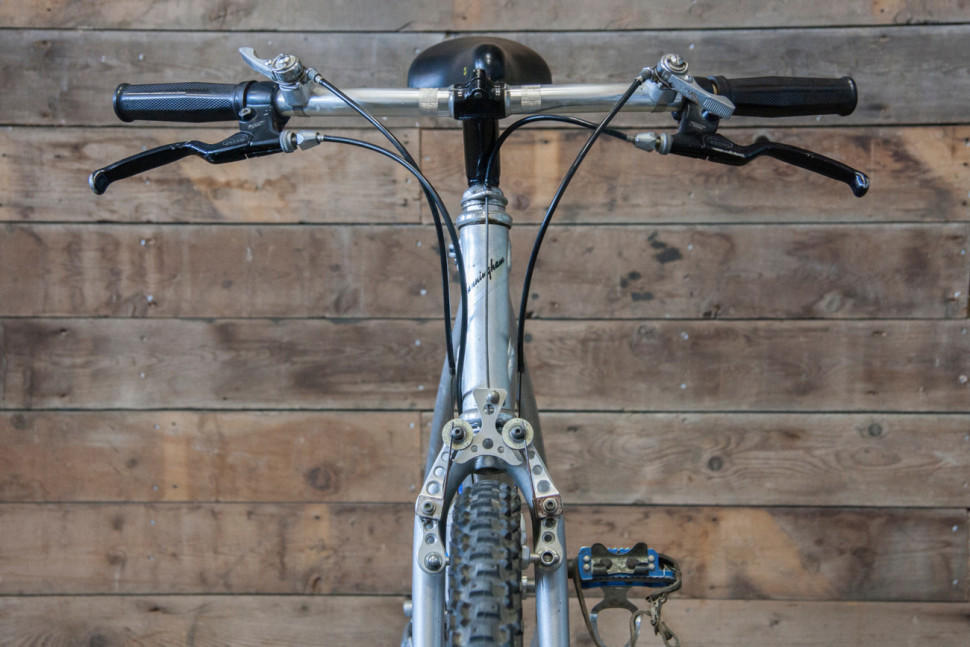 If you have a dollar or two or three to throw towards Charlie’s aide, I know I speak for both Charlie and Jacquie when I say thank you, and that your help will most assuredly buy you a ticket into mountain bike Heaven.

Another way to get into mountain bike Heaven is to find Jose’s lost love;

Hey there man. So I’ve had a few bikes knicked over the years but this one hurts bad. It was a 90’s Kona Hot (built by Tom Teasdale) that was taken out of my garage here in Rockridge in August. The main distinctive qualities are that it has a fluted/ribbed downtube, and a sweet custom candy green paint job by Dekerf; I’m pretty sure the asshole stole it for the crap fork on it. It kills me to think that the frame might have just been tossed away. Anyways, its probably long gone, but if you think there’s a chance of recovery it’d be great to see it posted it up on AHTBM. No worries if not.

So check her out before you take to posting random stolen bike notifications in the comment section, like this one regarding John Cardiel’s stolen beloved someone left on Monday;

My Bike Just got Stolen in downtown Sacramento, it says DESTROY BABYLON SRS 18 on the head badge,, red Phil wood hubs,, please contact me have if any information,,if you see it please steal it back

So get ahold of Platty. She’s good at this stuff. Me? I can barely handle the tasks I have at hand.

Likewise, I don’t want to be the guy who has to sift through untold numbers of stories regarding cyclists senselessly being mowed down.

Fifty bucks says that guy doesn’t do more than a year in jail.

See? Now I’m in a bad mood. That’s why I don’t want to deal with that stuff.

Moving on to remaining matters, I actually have a story of from a fallen cyclist, but it was his own bad luck that caused the crash, and eventually he’ll be ok. Sadly this is more than can be said for his stretchy pants;

I crashed about a month ago after a front tire blowout (in spite of everything you told me about not crashing), and EMTs cut all my kit off while I was out cold. In all the spare time I have now, being all injured and such, I reached out to the manufacturers hoping to find some crash replacement policies that might take the edge off getting new stuff, especially my 2-month-old helmet which arguably saved my life.

Well, no joy on the helmet. They haven’t responded to numerous emails and voicemails. But KindHuman; that is a different kind of operation. I crashed in a pair of their bibs and emailed a generic info address I found on their site asking about their policies. Within a few hours Gavin, one of the two principles of the company, had responded, wishing me a speedy recovery and outlining their process of reviewing each individual story and then issuing a discount code accordingly. Keep in mind it was late when I hit send and they are in Toronto so it was even later there. I was pretty pleased to hear from him at all, much less so promptly that same evening, and we traded some more info with pics of the cut-up shorts and a document from the hospital where I was treated; 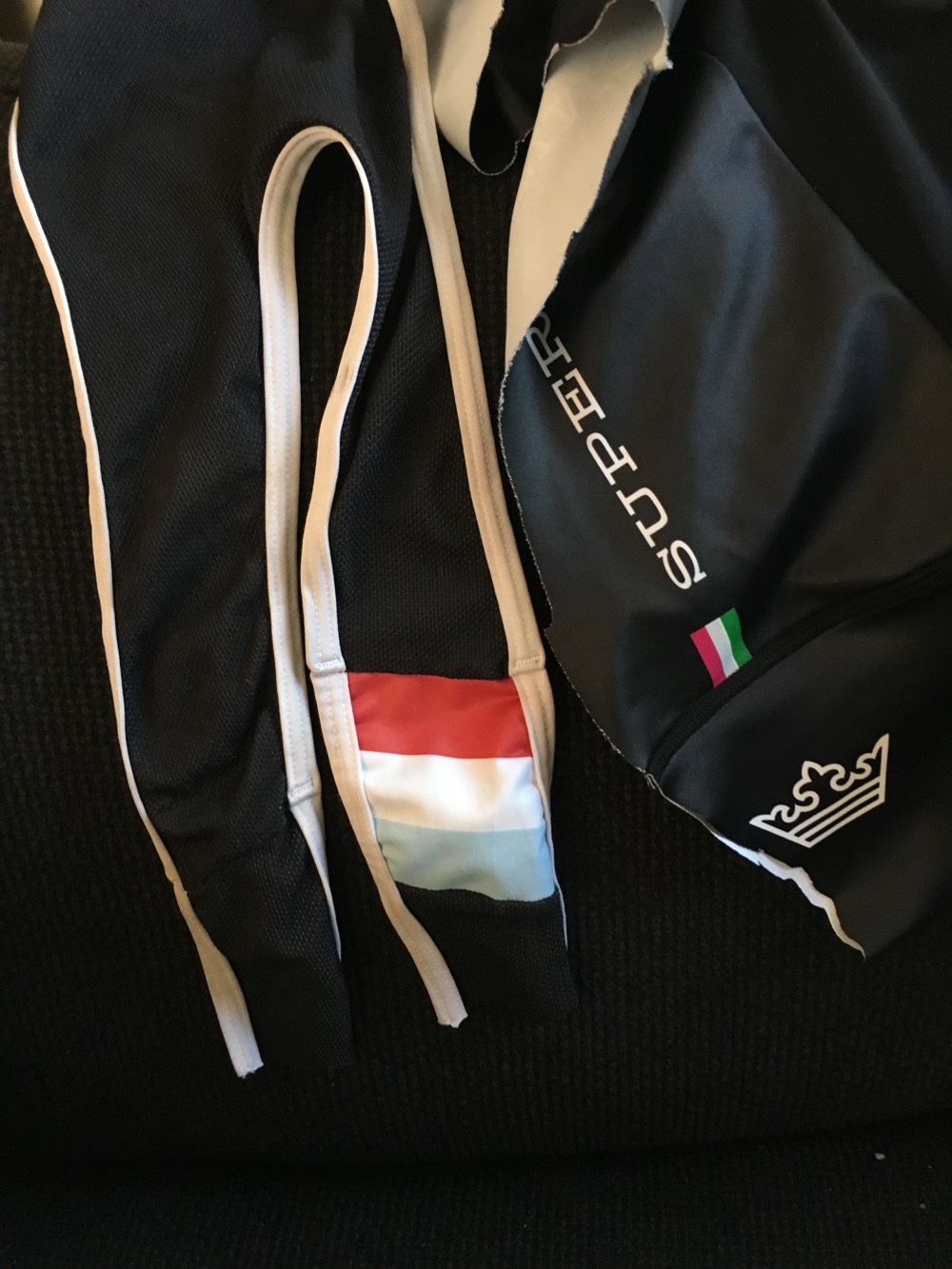 He got back to me a few days later to tell me the new bibs would be on the house! Early Christmas present! I can’t guarantee your results will be the same, and I don’t advocate crashing your brains out to get new gear, but I can say for sure that Gavin is an extremely generous guy, and that KindHuman is one company that deserves our business. I know about them from reading about them on your site years ago, so thank you too.

So this crash has taught me a coupla things: narcotic painkillers and alcohol are not supposed to mix, and some people really do mean what they say when they promise to do the right thing for their customers. Not to mention they make some seriously comfortable bibs.

Well, duh. They’re called KindHuman. That would be a little shady of them to be called that and then do something dickish.

I also encouraged Ed to send me more photos of the aftermath, which he did reluctantly; 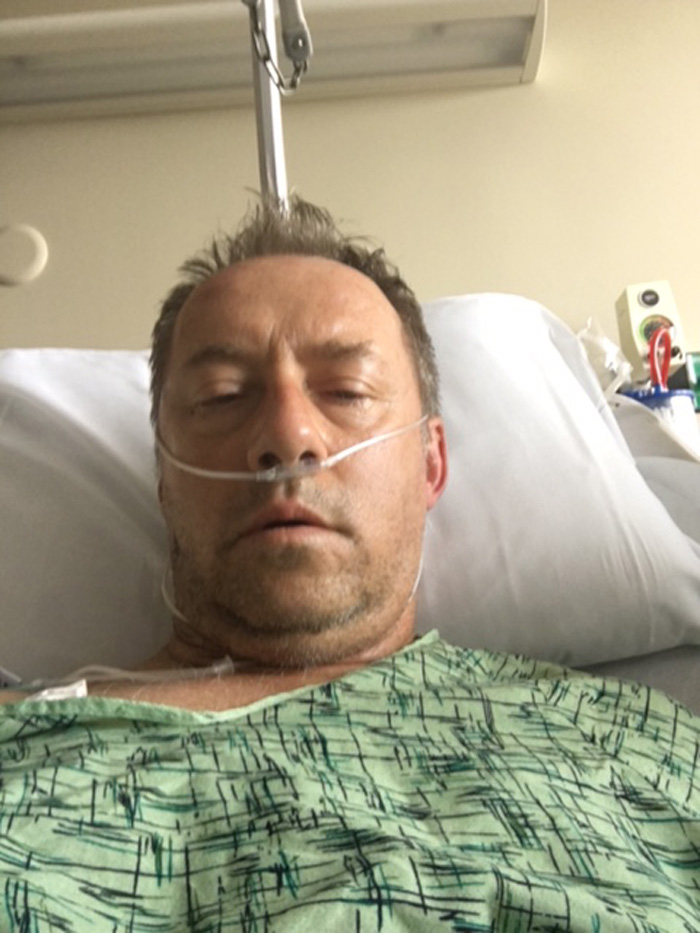 Seeing my friends jacked up in a hospital bed makes me sad, and since this story has a happy ending with him healing up and swiftly getting back to normal, I opted to do a little Photoshop wizardry to make me a little less so; 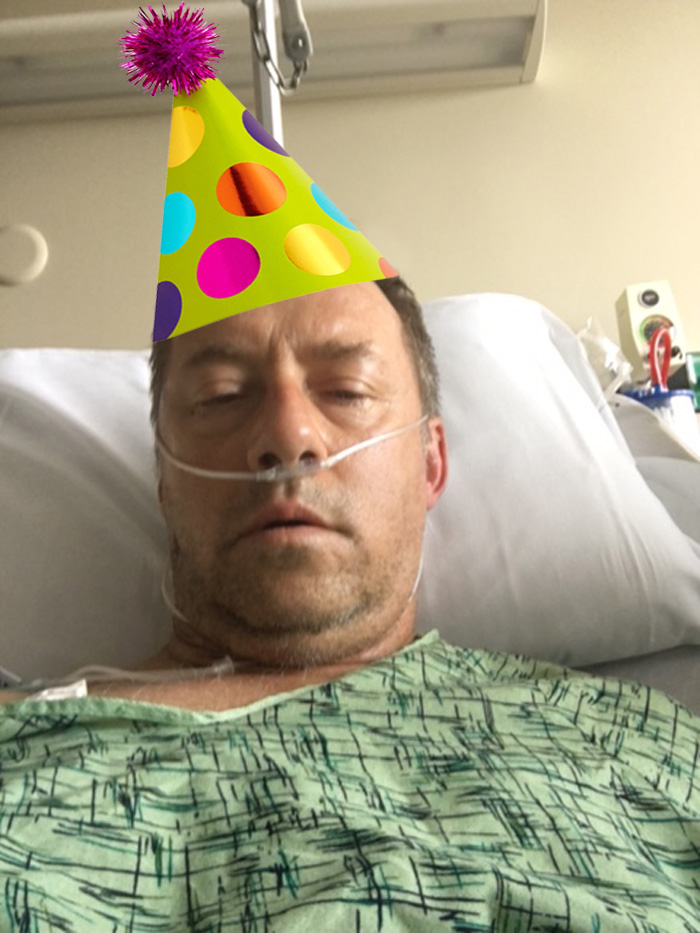 It’s with that, that I put the truck upright, and return to the grain elevator to refill for what I hope will be another eventual day of corn dispersion.