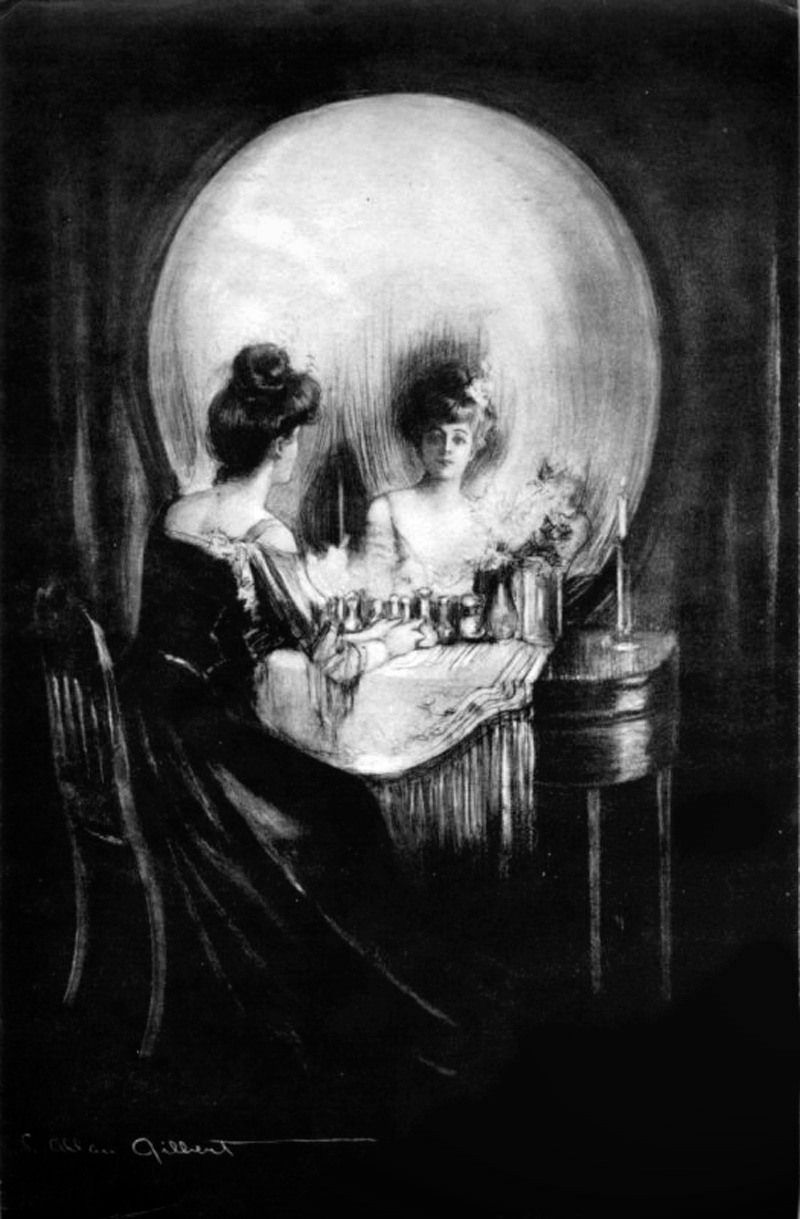 So let’s start the day with a ride in the Wayback Machine®™©. Hold on tight. It can sometimes be a bumpy one; 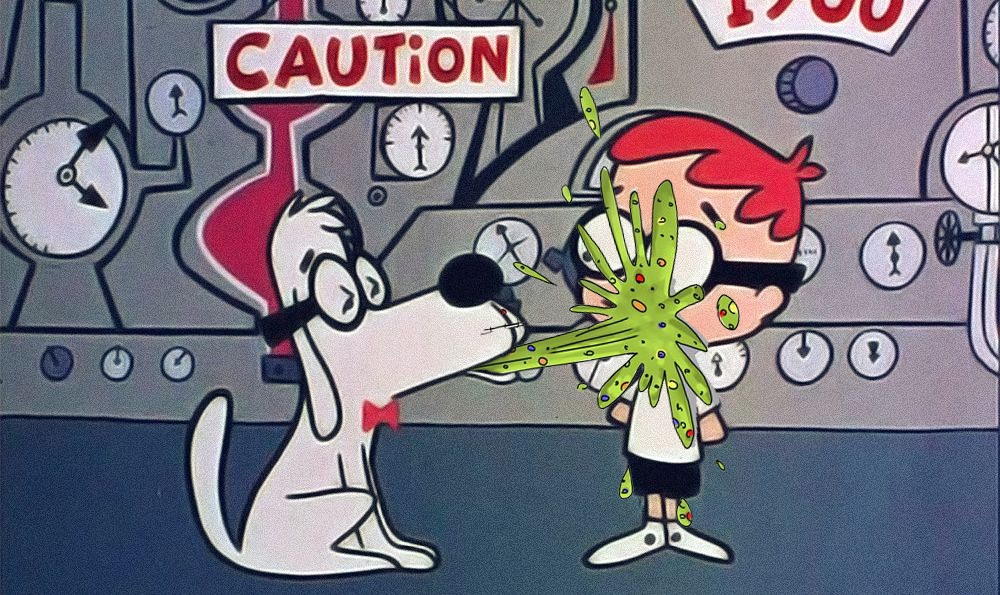 Before we get onto the main course, it’s been brought to my attention by a little bird that the good people at SE Racing have some ridiculously cool things in the works for this spring; 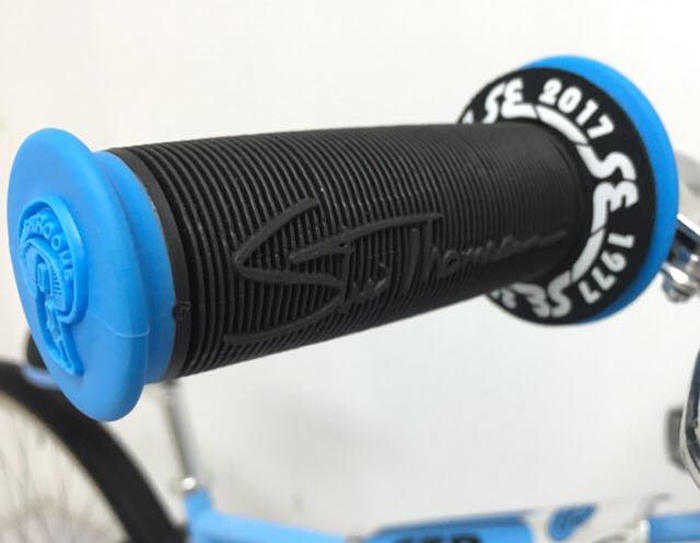 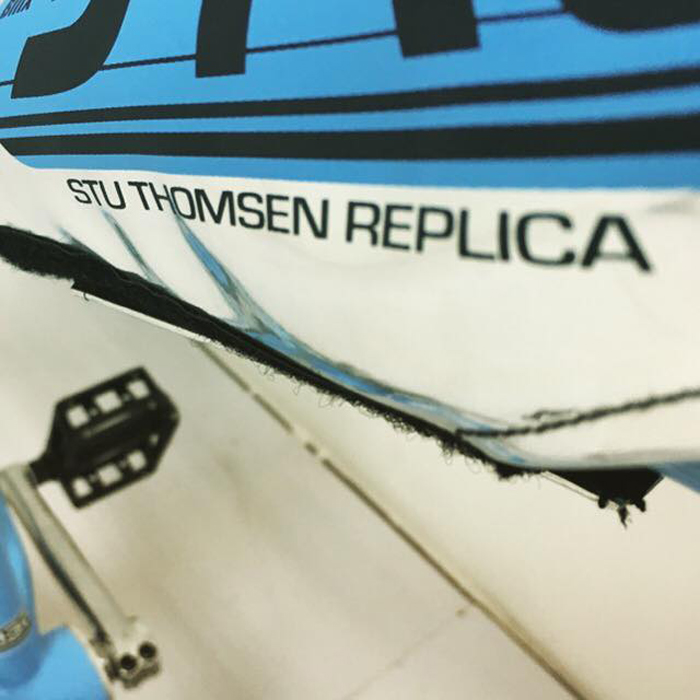 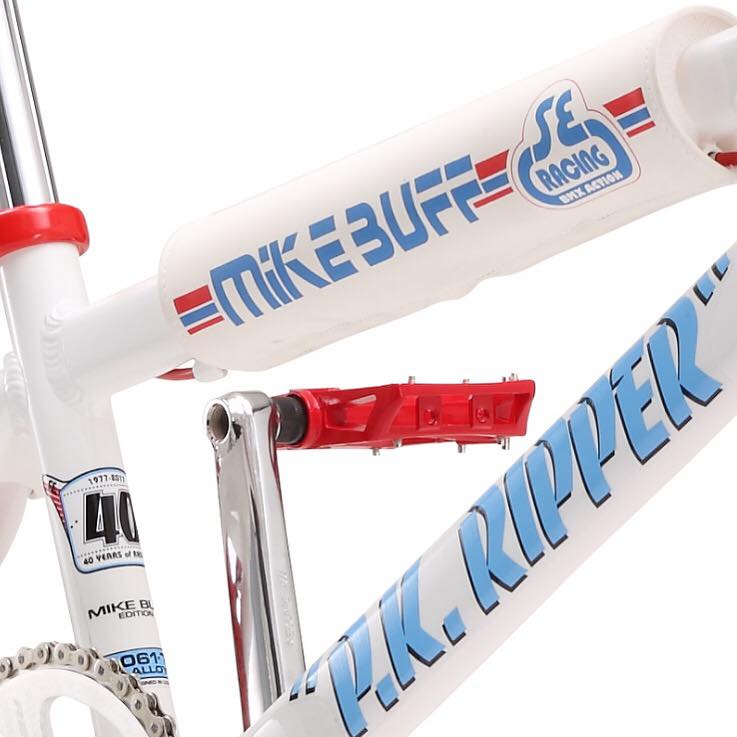 You know who has two thumbs and is peeing themselves like a child in excitement?

This guy, for certain.

And I don’t want speak for anybody but maybe Mike has at least one; 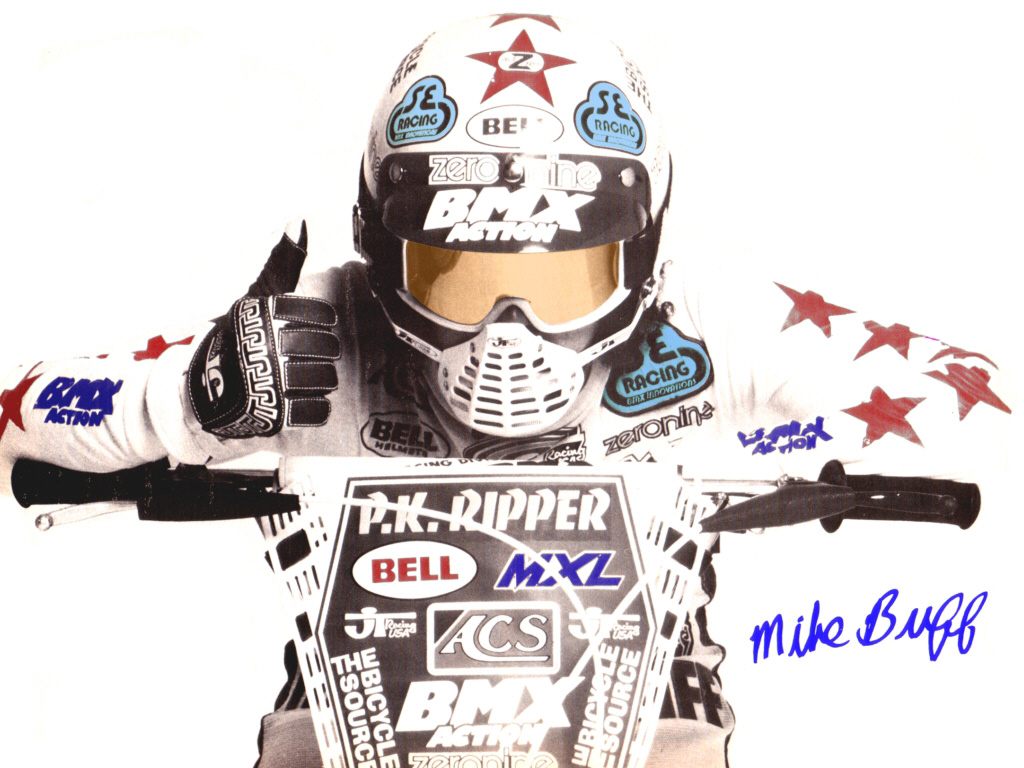 I’m gonna try to not let these slip by me like I did the original re-issue of the OM Flyer.

I still lament that day.

Now that we’ve got that bit handled, let’s get on with the rest of it.

The meat of today’s effort revolves exclusively around perspective and experience, both of which I have just enough of to maintain one foot in front of the other. Once a person has been in and around the various advances the bike industry has to offer long enough, one begins to develop a highly honed skill in detecting what’s good, what sucks, and what falls somewhere in the middle. Of course the variable in all of this is personal preference, which last I checked continued to be allowable. Do you still have cantilever brakes on your cross bike? That’s fine, because they still work as well as they ever have. Do you prefer disk brakes instead? That’s ok too.

Do you have seven speed on your mountain bike? Maybe less? Maybe a rigid fork? Yep- If you like them, all of these things are going to still work just fine.

Case in point- Somewhere along the way back in the mid to late 90s, the Rock Shox company came up with a fork called the Judy SL, and except for those few hapless souls who got pegged in the forehead by the rapidly ejected top cap, life was good; 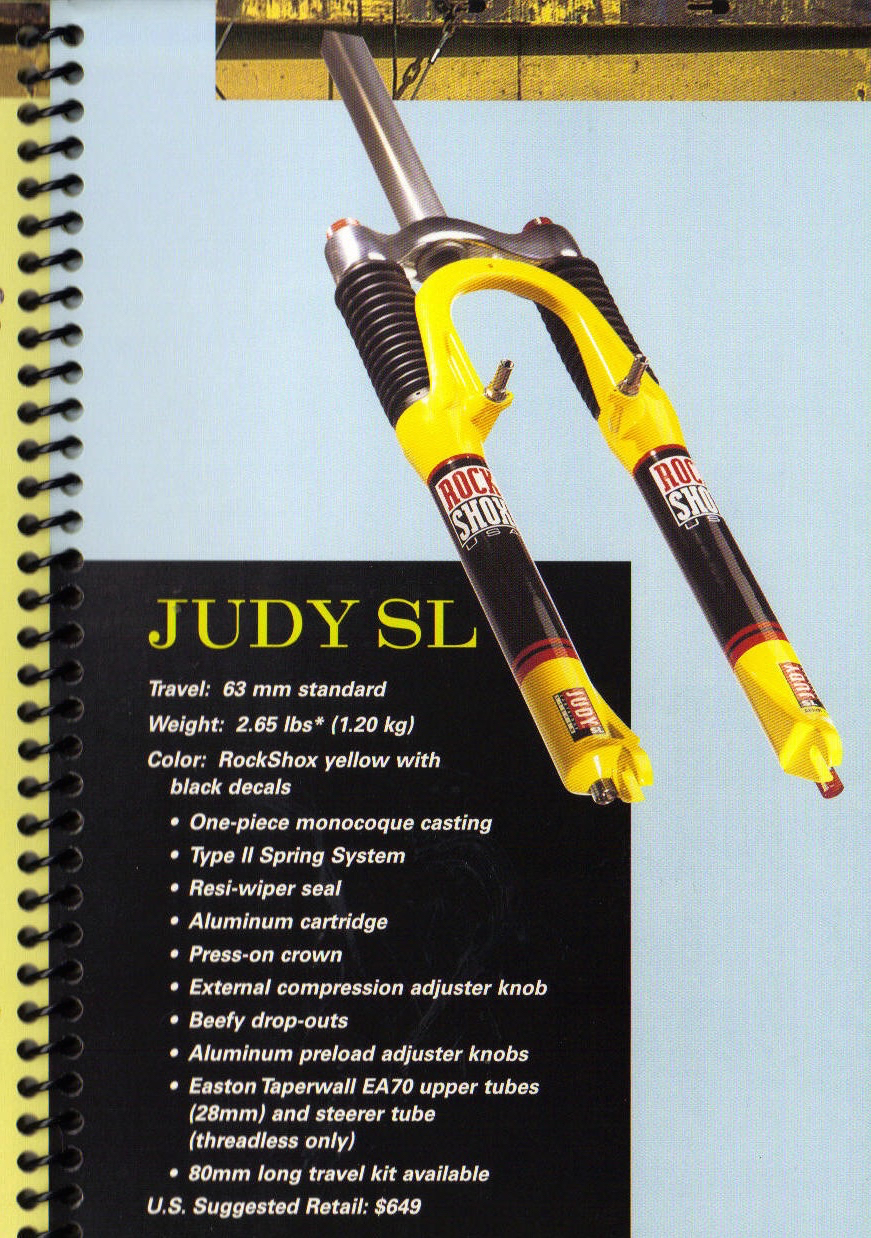 This delightful yellow beauty happened to be my first suspension fork. Up to that point I’d been quite content with a beautiful Bontrager rigid fork, that I regret every day having gotten rid of.

Anyway, this was an era in which elastomers ruled everything. 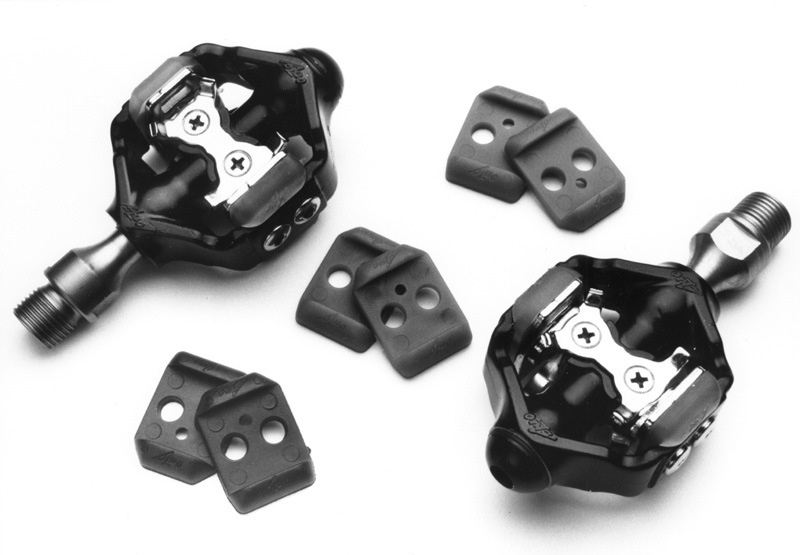 Both front and rear suspension; 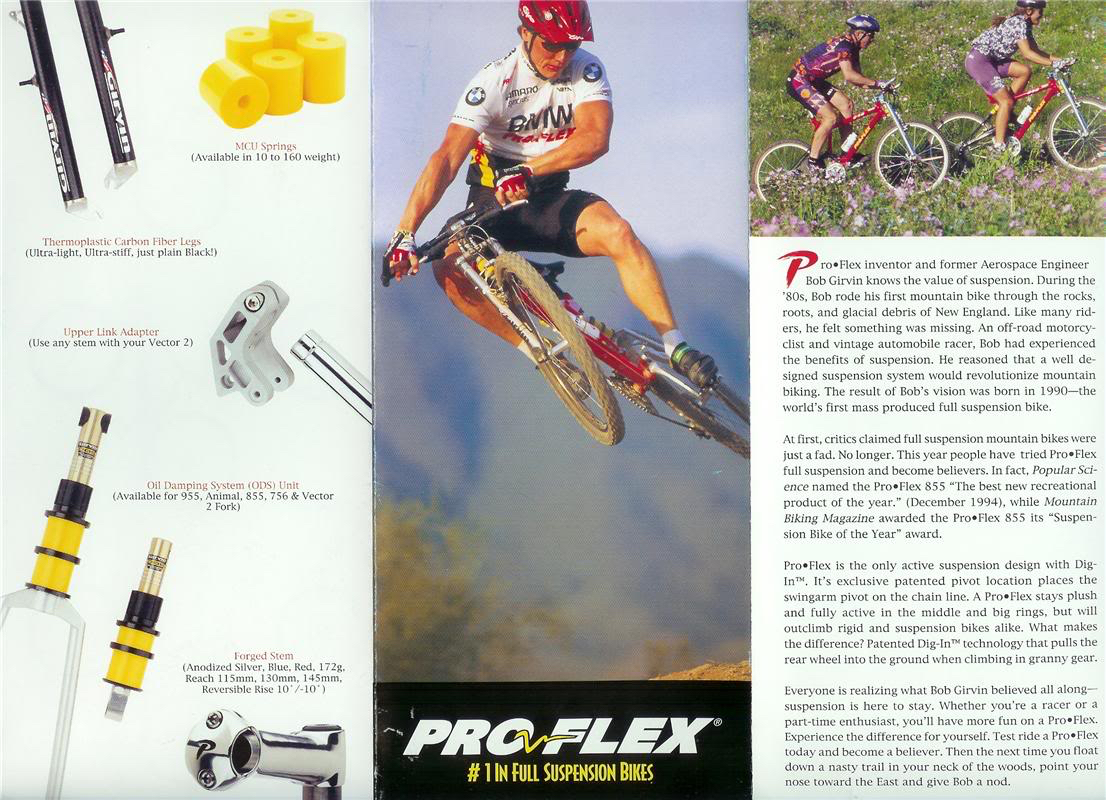 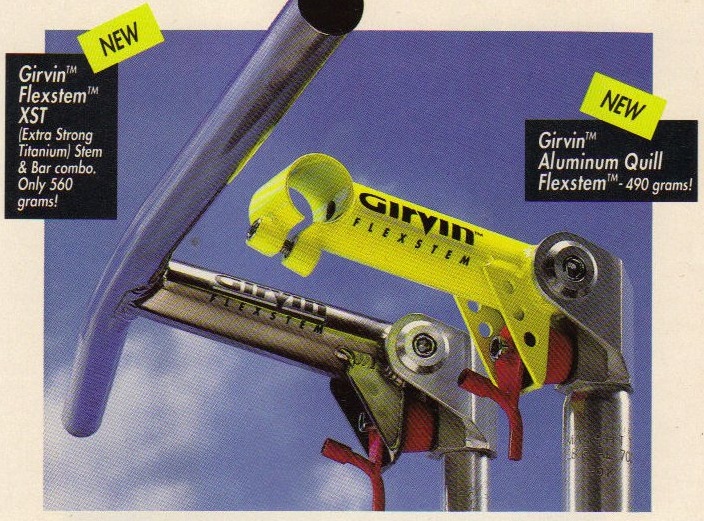 At the time, a lot of this technology appealed to a lot of people, myself included. It was generally maintenance free, and when you did have to work on it, it was a super easy task to handle, and best of all, for the most part it wasn’t prohibitively expensive.

Of course around this time a number of manufacturers also released another elastomer specific part, being the seatpost; 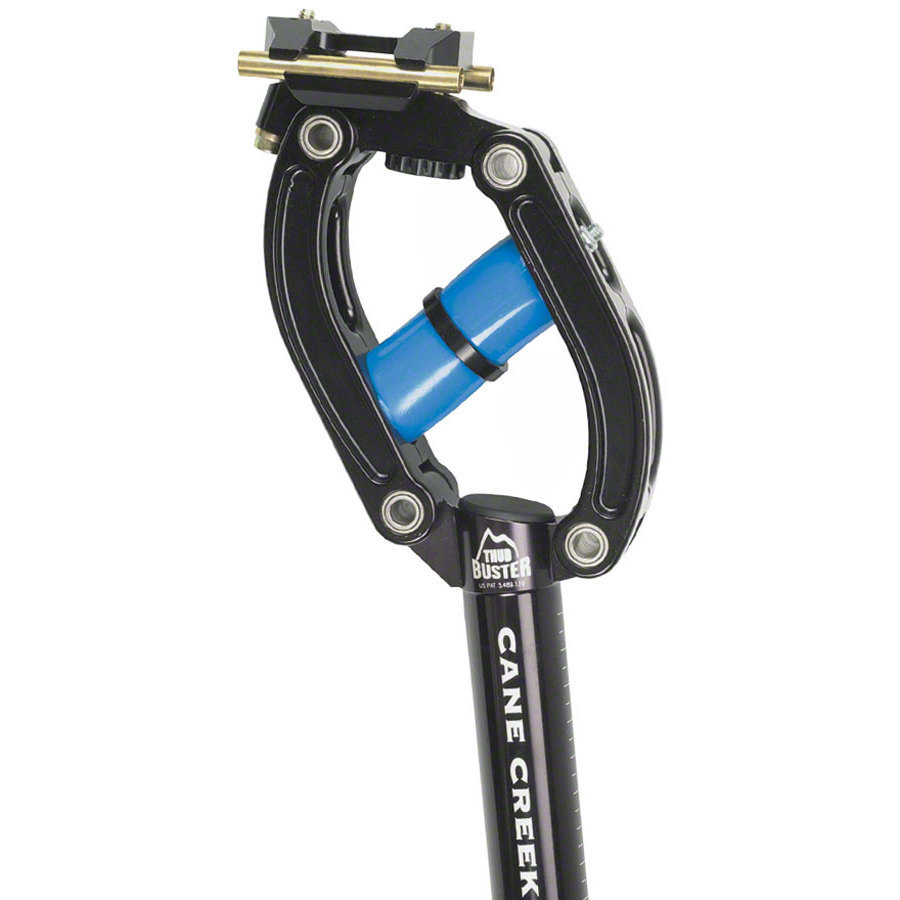 The above which is actually still available.

Why, in the years that followed, even the road market wasn’t immune to all of this rubbery goodness, as Specialized introduced their Roubaix framesets; 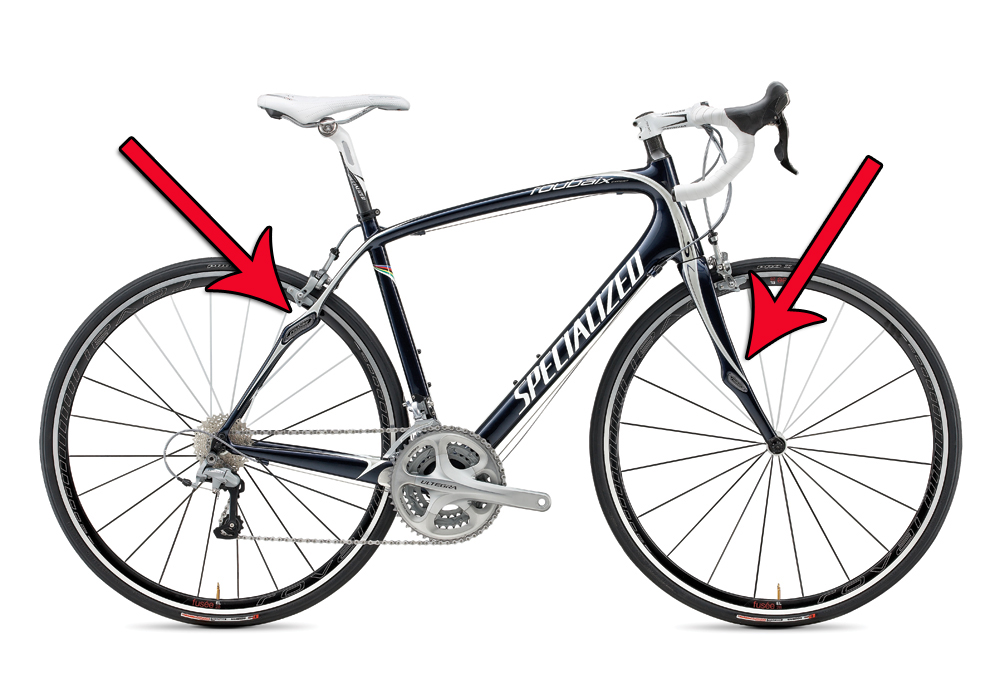 Though I have it on good authority, (one of the people who actually was responsible for designing the frame), those little rubber bits in the fork and seat stays don’t actually do anything.

Shocking, I know. (No pun intended.)

Now, folks with any knowledge of my own personal bikes probably have an idea where this discussion is headed. Besides applying this technology to their forks, Rock Shocks also made themselves a suspension seatpost; It’s been said by people who were actually in their employ at the time that this was the best product Rock Shox ever made, and I would be inclined to agree. They’re ridiculously simple to work on; 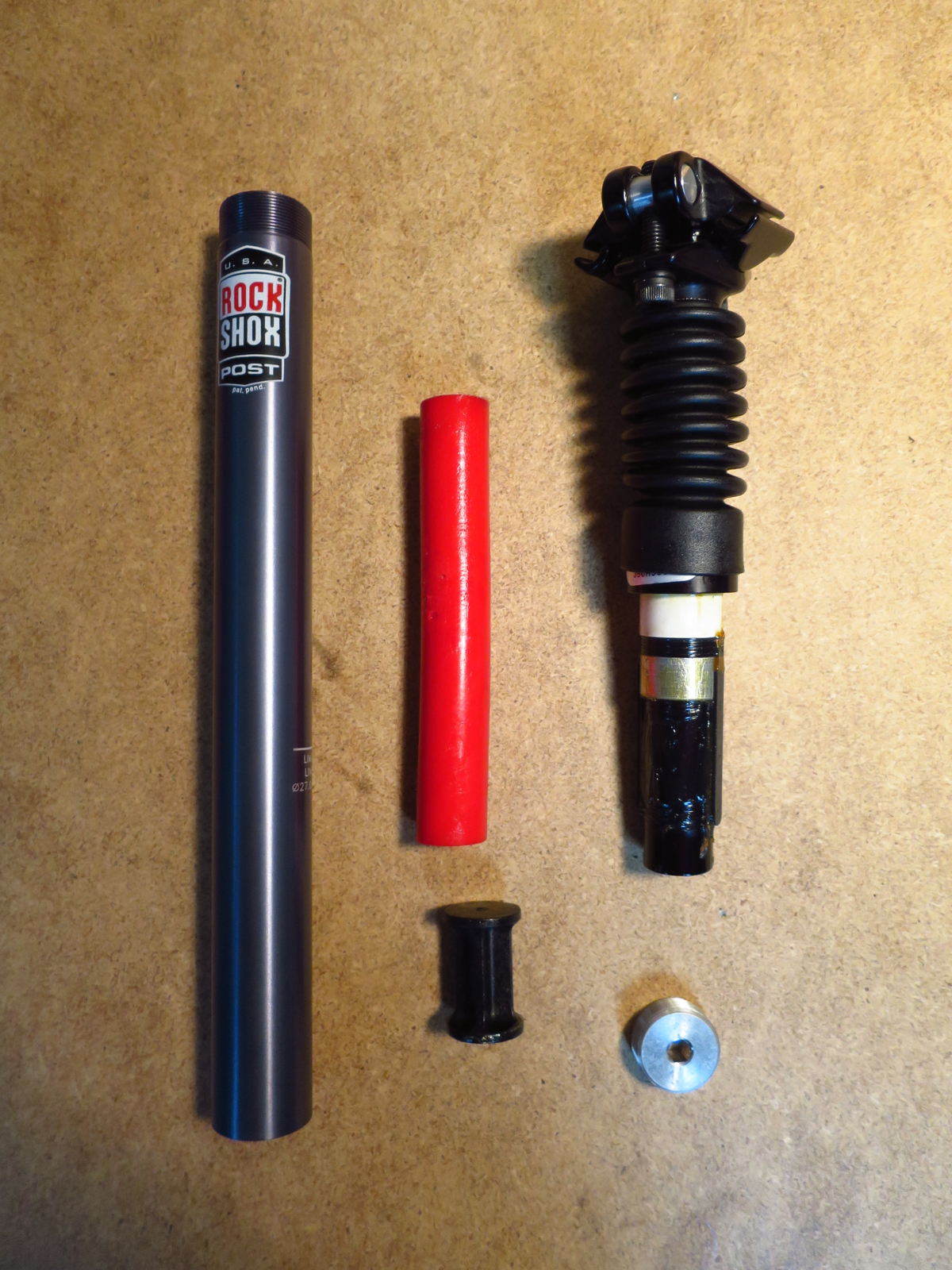 And take just enough of the edge off to keep my lower back happy. 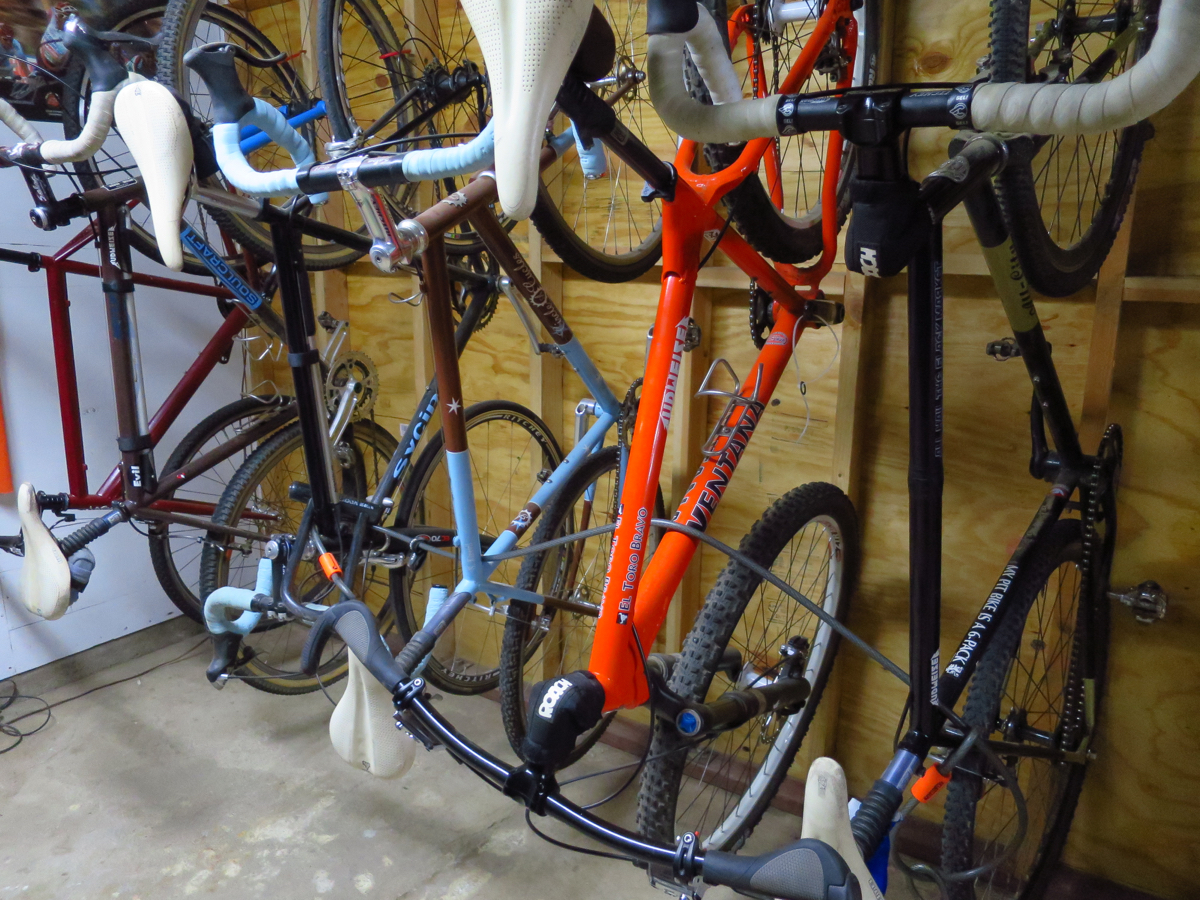 Oh, and that WTB Deva saddle wormed its way deep into my heart as well.

And eventually this thing which was near the height of technology also became an item of ridicule.

I’ve had people actually passive aggressively note that perhaps I wouldn’t need it if I knew how to ride a bike. These are the same people who fall all over themselves for such things like elliptical chainrings, because to their mind this is somehow ‘new’ technology. Of course the reality that they’ve been riding bikes for all of five years lends to the fact that they simply don’t know any better. I can’t blame them for their ignorance… I can only mock it, or at the very least try to show them a different way of looking at it.

One point I’m making I suppose, is just because it’s ‘new’ doesn’t mean it’s ‘better’, but I’ll be damned if aspects of the bike industry, its occasionally cyclical and recycled ideas, and those who support them are able to get that concept through their thick skulls. 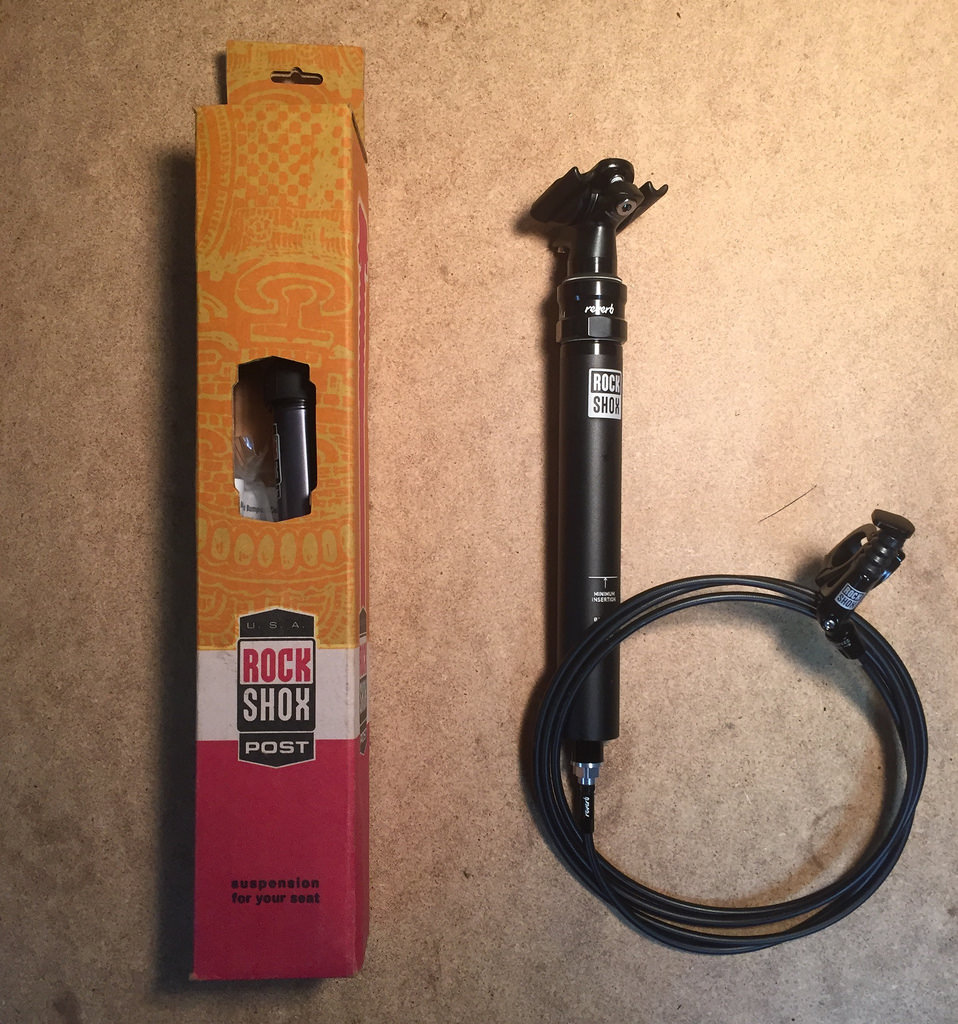 The latter of which I threw on my snazzy new Kona, and then propped up on Buddy so that I could snap a photo of it; 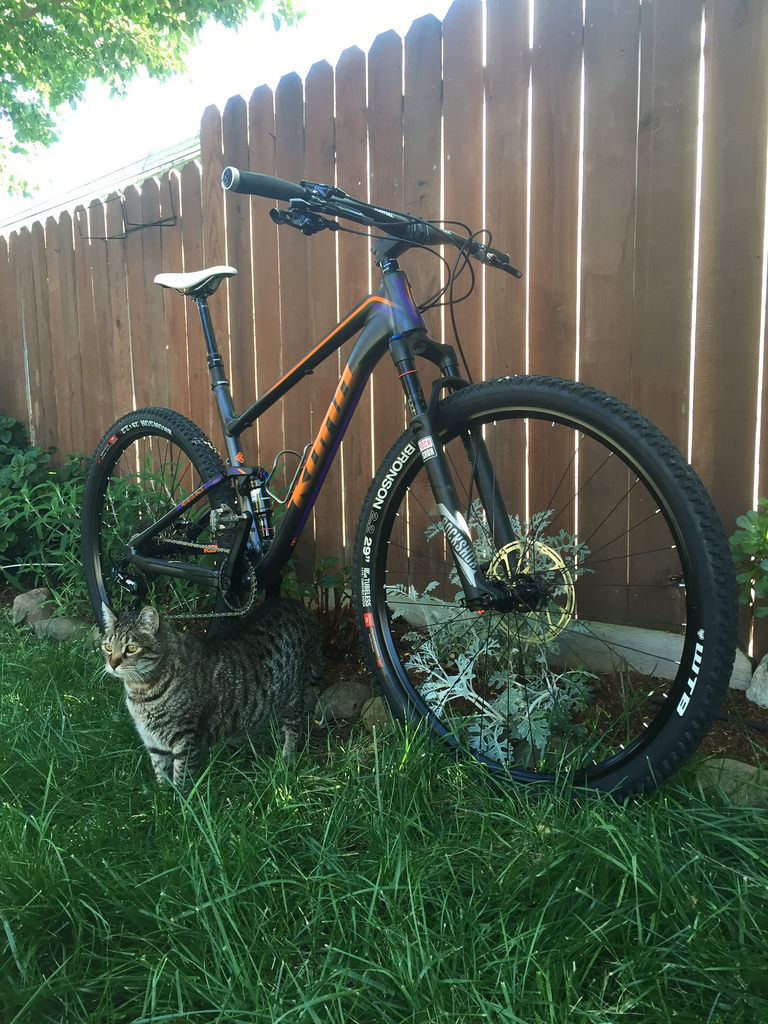 Holding your bike up with sticks, or disembodied hands is yesterday’s news.

Now I’ve moved on (at least on this bike) to what is currently among the most technologically advanced hardware available, and at least for the time being, I’m back on the crest of the proverbial wave.

The overriding point being I suppose, that people should ride what they wanna, worry about that alone, and chances are better than good that I’ll have it long enough so that people sixteen to eighteen years from now will make fun of me for it.

And I’m guessing as long as it still works, my perspective will remain exactly the same.

19 Responses to “Perspective is worth a pound.”