So let’s get to doing what comes naturally. 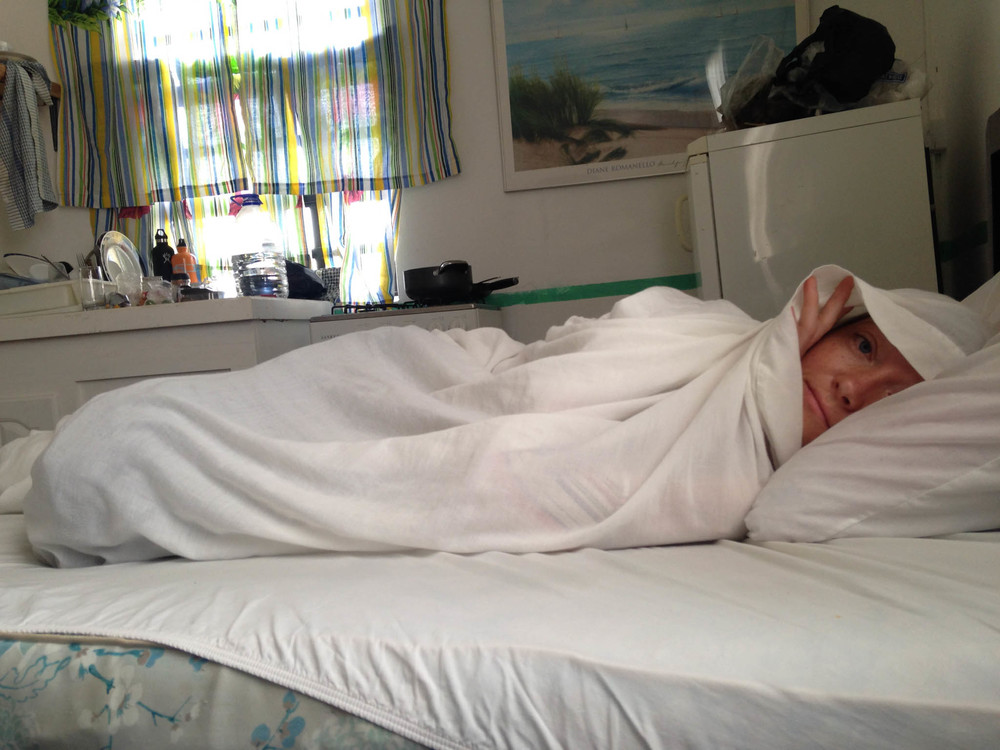 Because I’ve been slammed sideways getting my feet back under me since my return, I’ll see what I can squeeze out today.

It might be nothing, or it might be something. Either way, you’ll get what you paid for.

Firstly, I’d like to make note of a new AHTBM branded bauble I have stuffed in the store hole. It’s small, so it was easy to get in there.

The thing of which I speak is the slam banging brand new laser etched top cap; 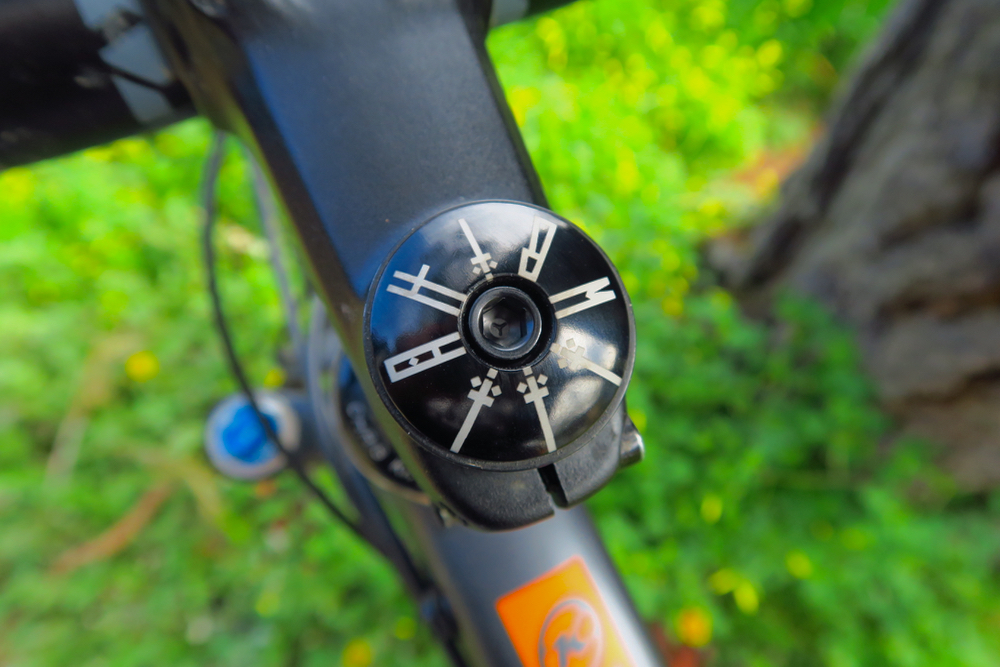 These won’t make you faster or better looking, but they will always serve as an indicator that you’re more or less facing the correct direction.

That is unless you’re sitting on it, facing backwards and pedaling forwards like those blasted BMX kids who had way more skills than me used to do in my hometown.

If that’s the deal, then I can offer no discernible benefit of having one. *Update. You suckers bought all of them. I even had to take the one off of my personal bike because I’m bad with numbers. I’ll have more coming soon.

Whatever the case, I have them in the store until I don’t, and after that, I might, or I might not again. It all depends on the effects of my meds.

In unrelated news of bikecycling shirts, good old CD from up there at Portland’s River City Bicycles sent just such a thing to me; Along with it came a piece of paper full of words; 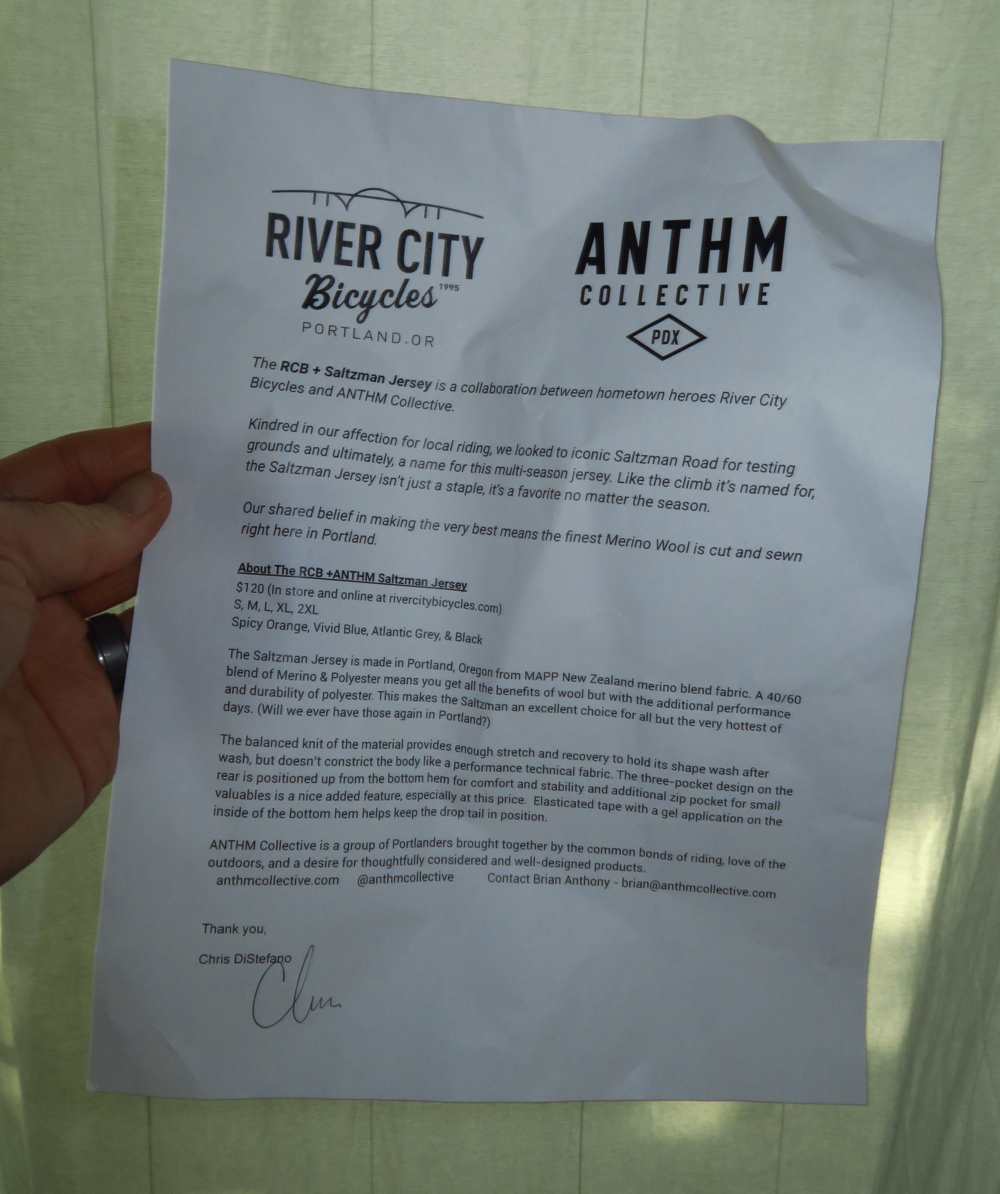 Upon doing a little bit of reading of the paper, as well as a website I found when I searched the Googles, the item in question is called the Saltzman jersey, and is a collaboration between River City and the ANTHM Collective, which is not to be mistaken for the AHTBM Collective for a number of reason, chief among them being that the latter doesn’t exist.

Constructed of a 40/60 Merino poly blend, it possesses all the features we love about wool, and none of them that we don’t.

I mean, that’s at least what I assume based on other wool poly blend jerseys I’ve used. I haven’t yet worn this one during a real world bike ride because I’ve literally been working since I got off the plane two days ago. Product testing will ensue just as soon as the world slows down and I can get two to three hours to breathe.

This might occur shortly after I’ve had a heart attack, but if that’s the case, then so be it.

Now in closing, last week Hurl texted me and said he was going to email me a flyer for this year’s Slick 50 bikecycle event. Grateful for the warning, I promised not to disappoint and ultimately found the following email waiting for me when I got home;

hope things have calmed down on the home-improvement front, and that you took full advantage of the the free booze in First Class. My only experience in FC was flying from Mpls to Bismarck once for my Dad’s funeral. The entire flite is maybe 45 minutes, and I think I was only offered one drink. Given the circumstances, I would have wished for a longer duration, but I digress.

If it pleases the court, I have two pieces of evidence to produce: It’s almost spring which means it’s time once again for the Slick 50 Spring Classick (a ride that puts both the ‘ass’ and the ‘sick’ in Classic.) Sure, it’s a road ride, but not a paved road ride. It’s really just an excuse to get a bunch of knuckleheads together after a long winter and ride 50 fast miles of varied surface; pavé, mud, dirt, tarmac, and possibly crusty ice and snow. The ride starts at ye olde One On One Studio, but takes a different route every year, and this edition will finish at Steel Toe Brewing where we will be enjoying delicious Size 7 IPA’s. 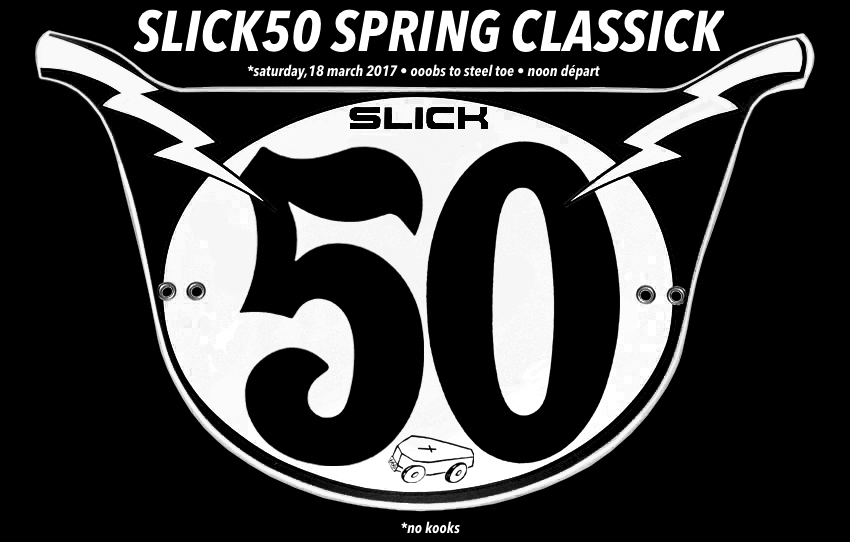 And in other nooze, there’s still time to get in on the CRC x DND Denim Demon glove pre-order; These wrist wrappers would look good hanging from anyones handlebars, especially any of your Turbojugend readership. OK, many thanks and let me know when the Mean Bean & The Chicken Chompers record is going to drop.

That is of course unless the covers have you pinned.