You ever wake up at the head of the week not entirely sure where you are?

Me neither also as well.

On top of having to put my pants on forwards for two whole days in a row, I had a couple of small matters of business to attend to. One that was pressing was for young Smith of RatKing Custom Bicycles. A few months ago he made contact with me asking about doing a drawing for a t-shirt. Happily I obliged, but on Saturday he sent me the mock up for the shirt and I immediately hated what I had given him.

So quick like a bunny, (or I suppose in this case, a rat), I knocked out a new graphic which I sent to him, to get to his graphics team so that they could do some turd polishing; Once this goes from a random scribble on paper to plastisol on cotton, I think it’s gonna be ok.

If by chance this is a design you could see wearing upon your own person, keep your eyes peeled to his site. They should become available at some point between now and eventually.

Another product you might have an interest in procuring for your own is a little number from Rob, of which he detailed in an email that read like so;

I’m just a long time caller, first time listener that works construction, rides bikes, drinks shit beer, listens to way too much Danzig/Metallica/Slayer, and has a couple of bee hives. These days bees are in pretty dire straights these days, and neonictonoids pushed by Monsanto largely to blame.

Anyhoo, I have a friend that owns an embroidery shop that makes patches and I’ve been talking with her about making some “Fuck Monsanto” patches; I don’t really care for people enough to have a lot of social media presence, so I plan on reaching out to those of you that seem to be able to manage your anti-social media skills to lend me a hand. If all goes well I might make a couple of bucks to put back into the bees.

If this is something you’d be interested in I’ll send you a patch to promote on your site when I get some made. I’m literally trading labor for this project so it might be a little while.

Thanks either way man, love your stuff.

If you’d like to throw some dough to the cause, and would like one or two of these for your own, reach out to Rob at rdelaney1313(at)gmail(dot)com for the skinny.

And yes. I concur. They really are the very worst corporation on earth.

I suppose while we’re on the topic of patches, I would be remiss in neglecting to circle around to the time a few years ago when Swobo and I partnered in that pretty badass backpack project; Does anybody remember that?

Along with the bag we thought to include a custom Dank cüzie, which I personally thought was cool; Well, in communicating with former Swobo boss Peter recently, I came to find that there were an additional couple of handfuls of said cüzies left over, which he sent to me on Friday.

I dropped a hint about these on Instagram shortly after they arrived, and some people picked up on it, but I still have a few left. If you’d like one for yourself, act fast, because humanity won’t be seeing these again.

Finally, and while we’re loosely on the topic of beer- As I noted in this post, in celebration of is 40th anniversary, select theaters are currently showing Smokey and The Bandit on the big screen.

Naturally, along with Jmak, Demonika, and six other diehard fans, we were front and center; 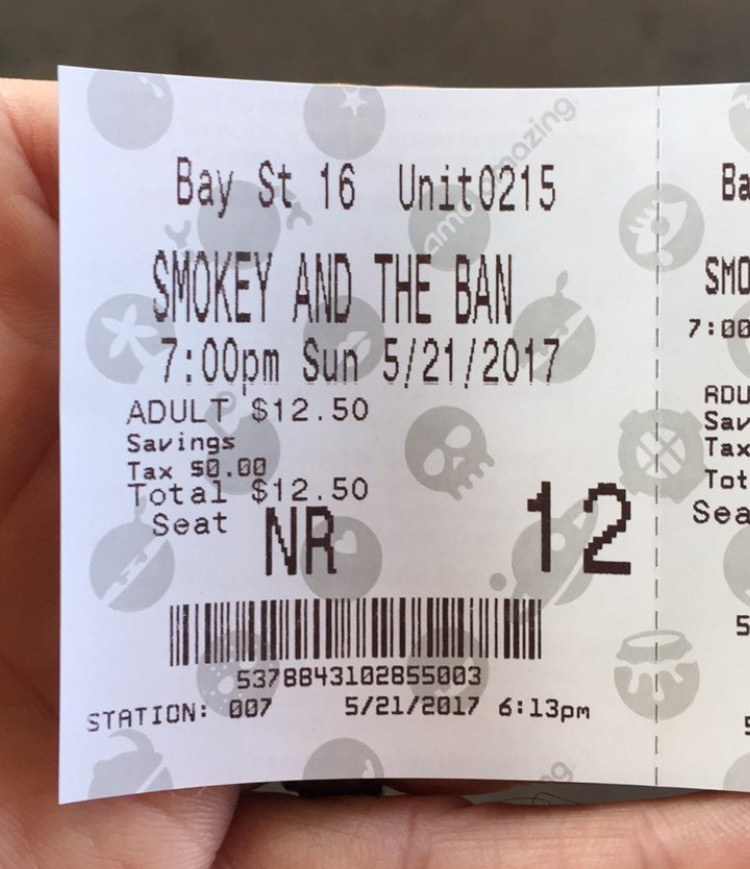 And because it’s only right, and really, would have actually defied the laws of nature had I not, I smuggled in a bunch of cans of Coors.

It was truly a delight to see what by all in tents and porpoises was the redneck’s ‘Star Wars’ on the big screen.

As indicated in that link up there, there is another showing on the 24th. After that, you’ll have to wait another decade.

If you drag your feet, don’t come crying to me.

It’s with the conclusion of today’s effort that I bid you a fine day, and wish you both health and wellness, as you crash headlong into whatever you have next.