It would appear as though you found that corner of the internet. 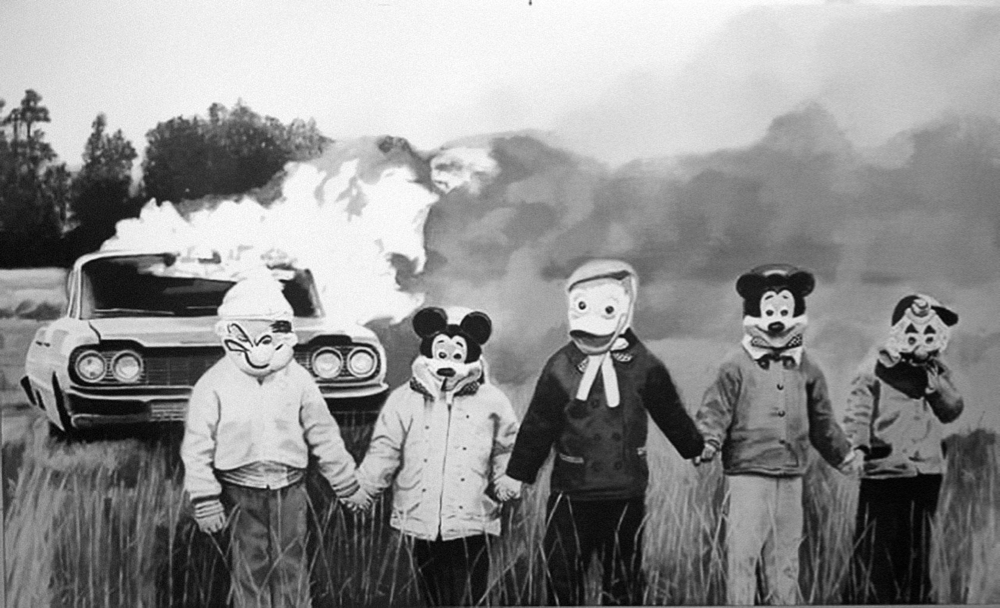 Spend enough time on a computer, and you’re bound to roll through here sooner or later.

Starting hot right out of the gate, we should cover news that Fi’zi:k is set to begin making 29er specific saddles; 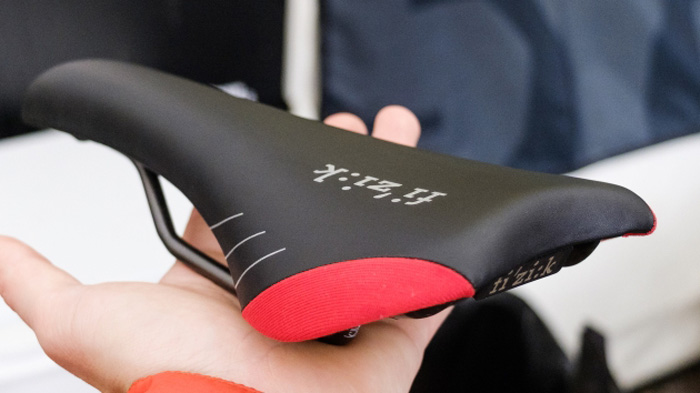 Before talking as much shit about this concept as I wanted to, and then align the concept with shoes made specifically for strutting, or gloves designed exclusively for foggy nights, I had to actually read the article.

It was then I saw that the title was a bit misleading.

Plus, being the fan of super mechanic to the stars, Doug Hatfield that I am;

-and with his stamp of approval on it, I can’t deny that there is merit to this concept.

Though being the trigger happy internet jockey that I am, I’ll go ahead and call a spade a spade and say that Bike Radar is getting pretty crafty with the click bate titles.

Between that schlock article regarding a new trend called ‘singlespeeding’ that I discussed in this post, and the above saddle piece? Why, I do believe they are just about dead to me.

In news of ear splitting rock and/or roll, it was just night before last when I caught wind that Underbike superstars O Zorn! and The Picturebooks were to be playing a show in just under a month’s time down in the LBC.

I asked O Zorn! vocalist Bill about hitting me with a flyer so as to assist in a bit of promotion.

So after way too many hours of doing that, and not doing anything else, I ended up with this; It stands to be a real ass kicker of a show;

The Picturebooks are a somewhat new act in my world, and I’m grateful for them to be there, as they fit in quite nicely with my directive to only ever listen to bands with two members.

If you’re down there in the LA area, make a note and swing through. I’m gonna sell some records and turn over a couple of pillow cushions to ensure I can be present.

In other news of events which may or may not achieve the same level of volume, From Jocelyn of Portland Design Works I got a shout late last week regarding another various bit of goings on they have their fingers in;

Next up: the annual PDW Omnium is going around (and around) this Sunday, June 4rd! Banked walls, no brakes and BBQ for all; 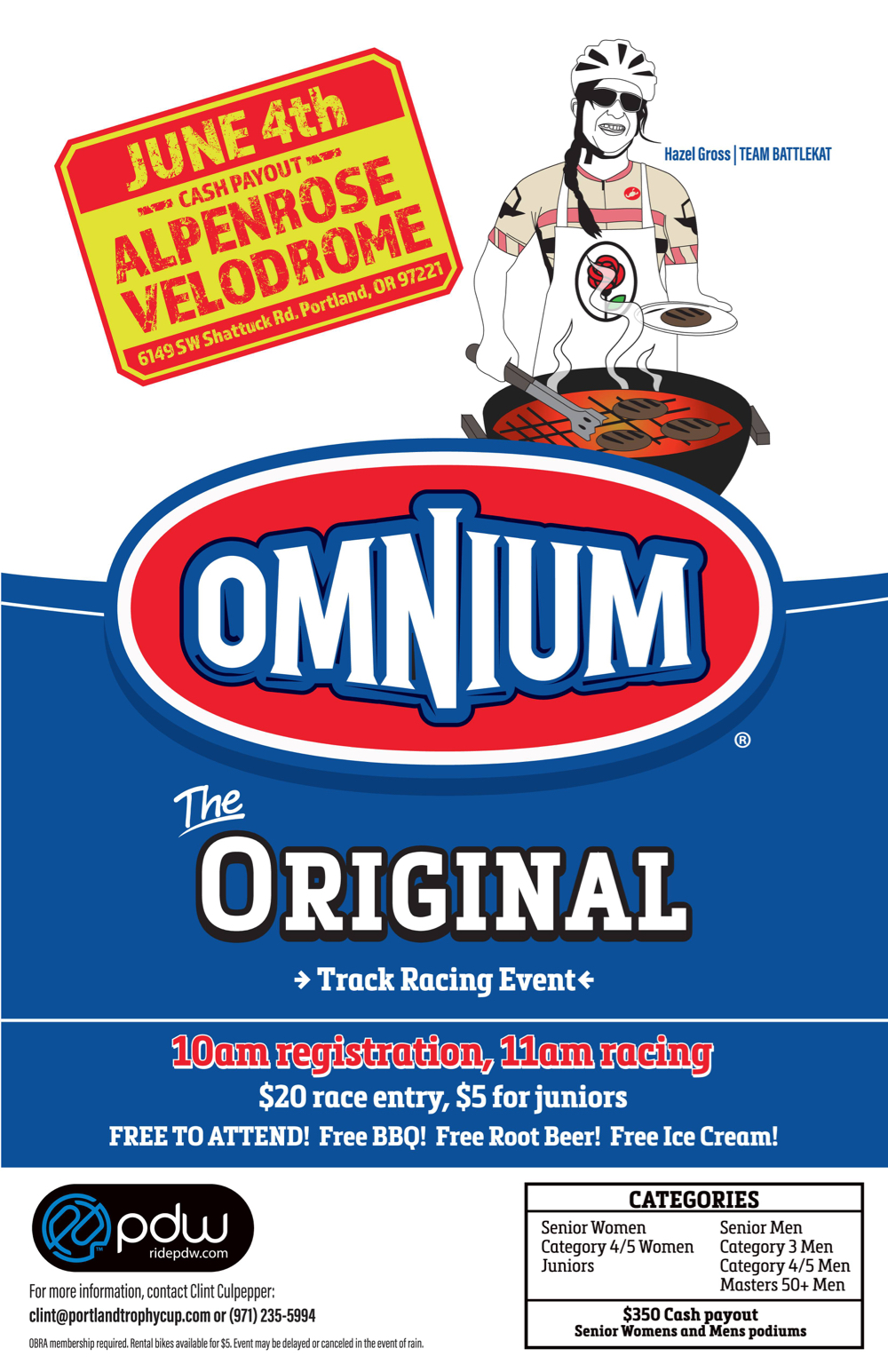 Tell your people to join us at Alpenrose Velodrome for racing and root beer floats. More details here!

They had me at BBQ, root beer and ice cream.

Oh, what’s that you say? The 4th was yesterday?

You gotta get up pretty early in the morning five days ago to get one past me.

Well, in light of this, I hope for two things. One, that the good souls at PDW forgive me for my transgressions, and two, that everyone in attendance had a blast.

Better luck for me next time.

One matter I am reasonably on top of is a note and a bit of fancy product that one Barry Wicks got at me with, which I will share with you now;

Hey dude, I hope you like the Hella Sweet Gloves I sent you. You’ll probably get them today, or maybe tomorrow, but for sure before the weekend, unless you don’t, which means you’ll get them Monday. Maybe. Probably;

*Editor’s note* I totally did get them on one of those days, probably; 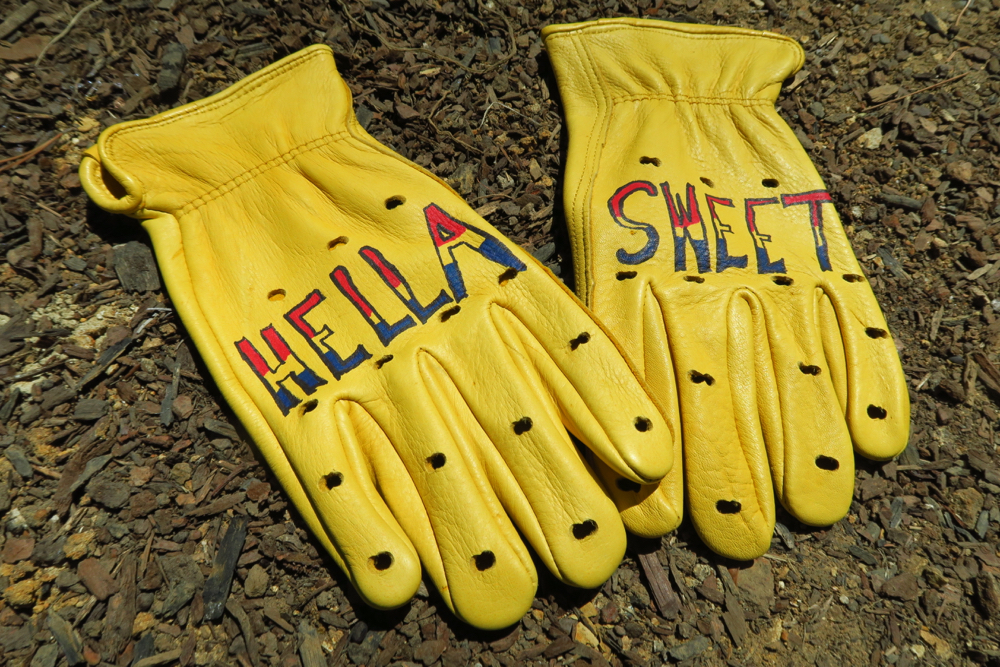 I decided to make these after getting annoyed with blowing out all my riding gloves after two days. (Maybe I just have big hands);

They are made of 100% Deerskin Leather and are supper supple. (Almost as soft as that one time I smacked your sweaty, bare ass in Santa Cruz); 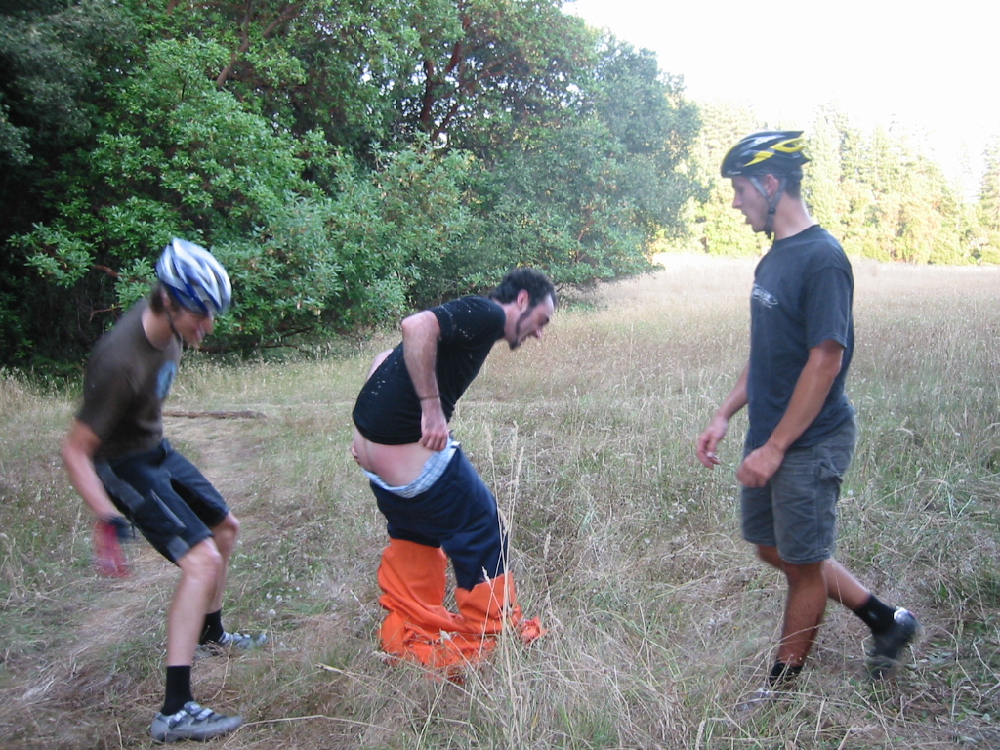 Plus Deerskin is remarkably resilient, breathable, and stays soft even after it gets wet.

I make these one at a time, so I can do custom colors on the logos and custom venting.

There are pluses and minuses about these gloves, but I think the minuses are almost pluses when you get down to it.

Pluses: They are Hella Sweet. They last a long long time. They are good for pretty much anything, like tossing logs and rocks off the trail, drinking beer you dug up from under a tree, burying said beer in the first place, and looking good at all times.

Minuses: Kinda warm, but the venting does lots, plus leather just smells better the more you sweat in it. Also, you get a little orange in the hand area when they are new because science or something to do with the tanning process. It goes away, and you get hella street cred because everyone know you where rocking Hella Sweets anyways. Totally worth the oompa loompa hues I think.

I also do a sno-sealed version for winter/skiing, but now that the apocalypse of our Cali winter is done I bet those wont be as popular right now.

I just launched a Hella Nasty womens edition too, which are a slimmer fit and have some anti Tr(D)ump connotations. #nastywomen etc etc.; 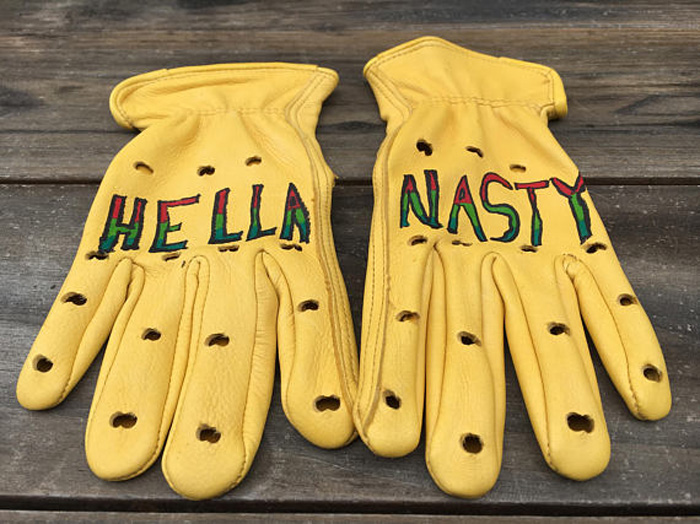 Anyways, I hope you enjoy them, and if you do, feel free to spread the word to your readership.

They are available to purchase on Etsy.

Hope you have an excellent day!

So there you have it. If you would like some custom glove love from one of the fastest fro bros in the game, look no further, and I thank Barry for his consideration in this matter.

Lastly from Paul of Atomic Cycles down there in the southern part of the state, I got notification that his eighteenth Coaster Brake Challenge begins in just about one month’s time;

If you could please spread the coaster brake cheer this time around via my attached flyer. Thanks; 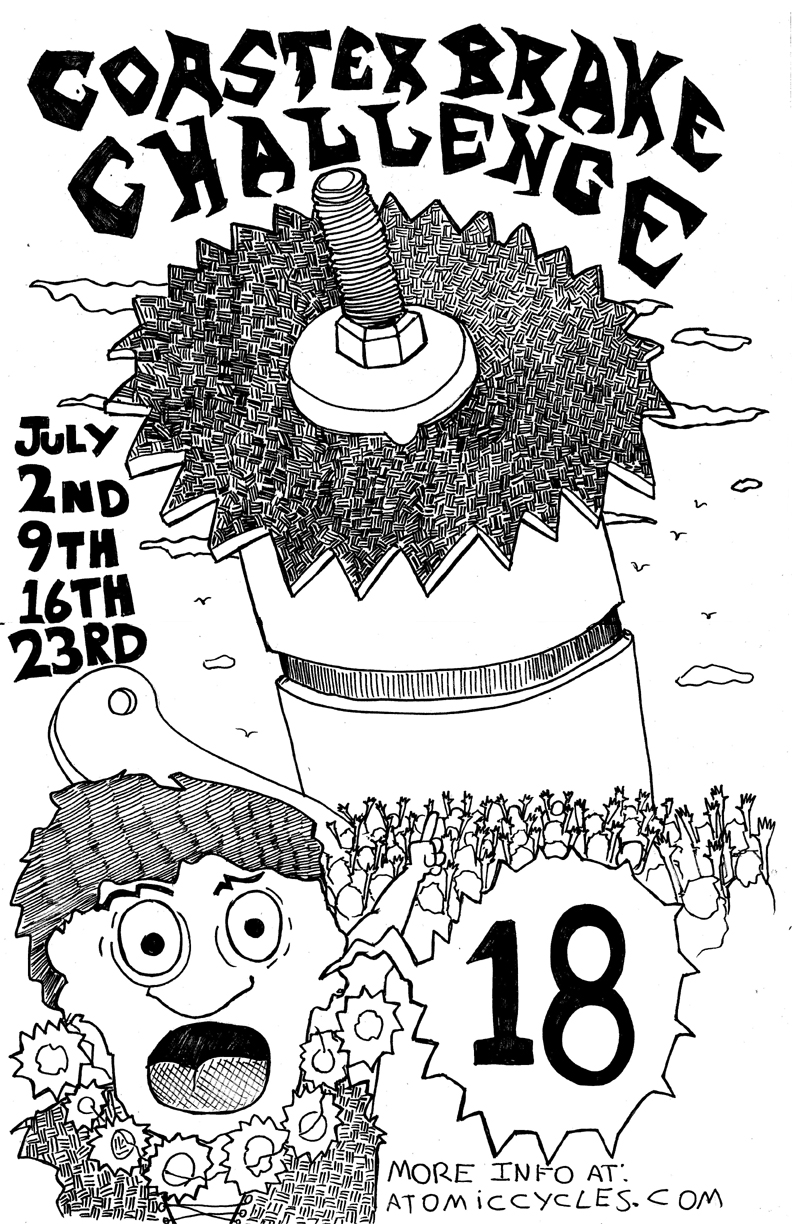 For all that is right and good. This has been cooking for eighteen years? Or is it that he’s just done them eighteen times over the last couple of years? Either way, Paul is clearly on to something good. If you’re in or around his ‘hood, mark your calendars for some two wheeled hijinkery.

Feel free to bring your own Disney mask and kerosene.

4 Responses to “Welcome back.”