to a guy who sleeps on the floor.

Not that Descendants lyrics aren’t always playing loops in my head, but as my compatriot and I rocketed southward on Thursday, and with no clear plan as to what I was doing with my life for the next 96 hours, let alone where I was going to sleep, the lyrics from today’s opening video were echoing though my brain in rotation.

Before we got into anything, Amanda thought it wise to stop by Santa Cruz and get in a dirt bike ride.

Since time was limited, and she was still dealing with a nagging shoulder injury, we just knocked out a couple of hours in one of my favorite little slices of green in town, at which time she did some rad-getting; 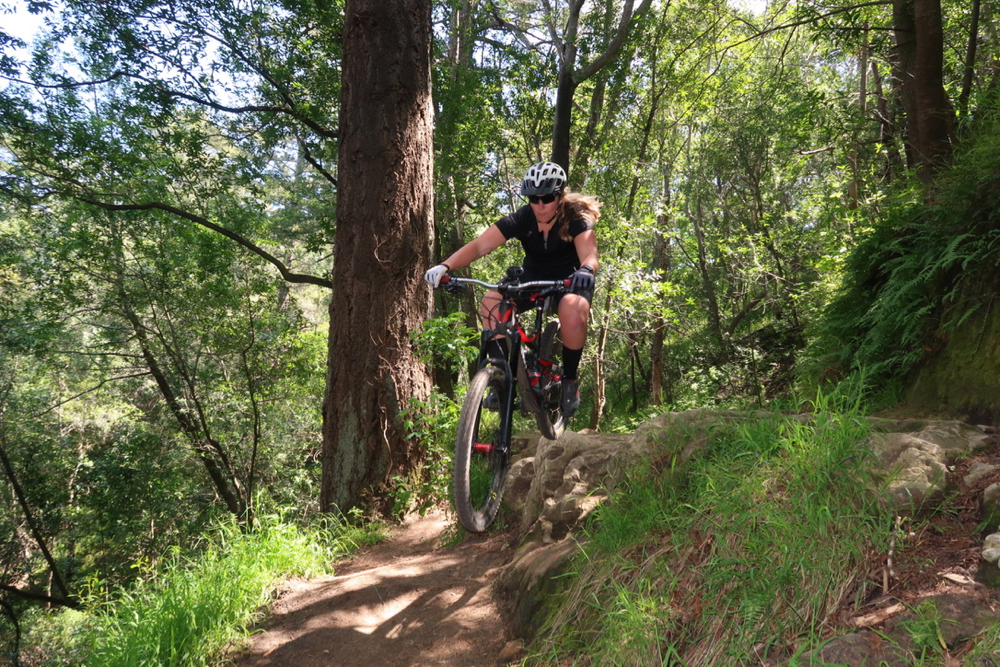 Folks might remember this particular spot from the Junker and JPow! promo video that was released back in 2013;

Or perhaps my own personal brush with fame in Bike Magazine with photographer Forrest Arakawa a couple of years before that; 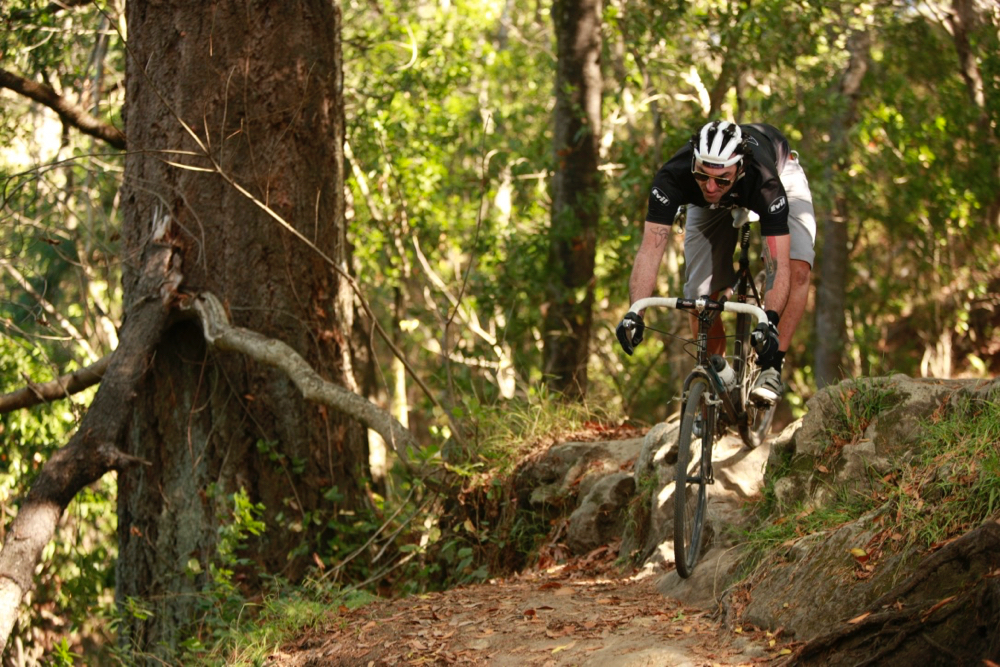 It’s a lot gnarlier than it looks.

Once we’d done our best at fending off a super bloom poison oak, we jumped into the bay in a futile attempt at washing the dreaded oils off; At this stage, we had to beat feet and get to getting as there was work to be done.

Once in town, we parted ways, and I headed off to meet up with Handsome AK, who for the night generously offered me my very own spot in his room; 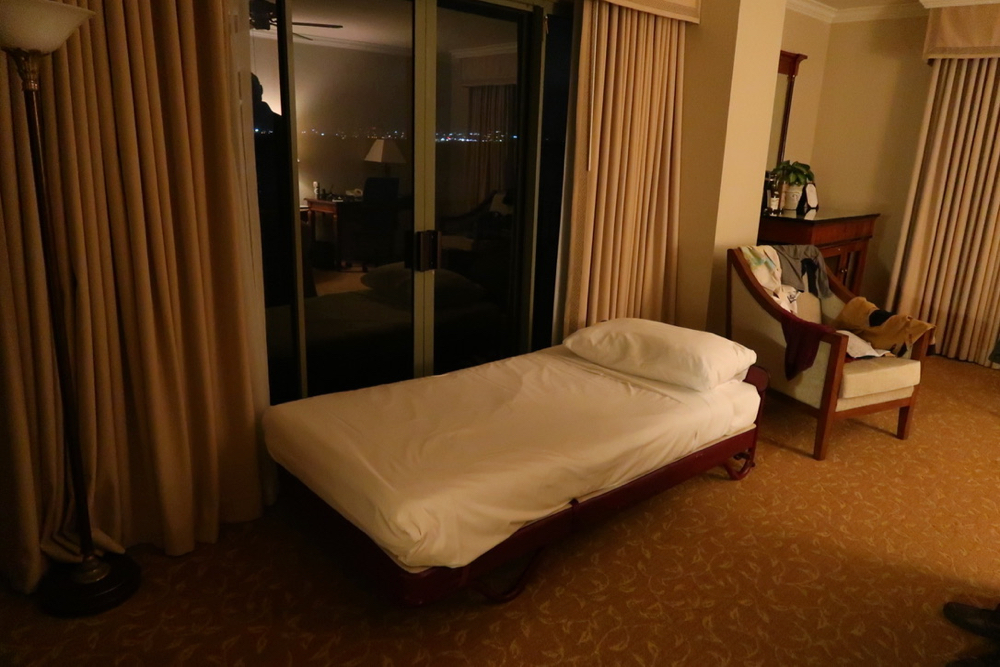 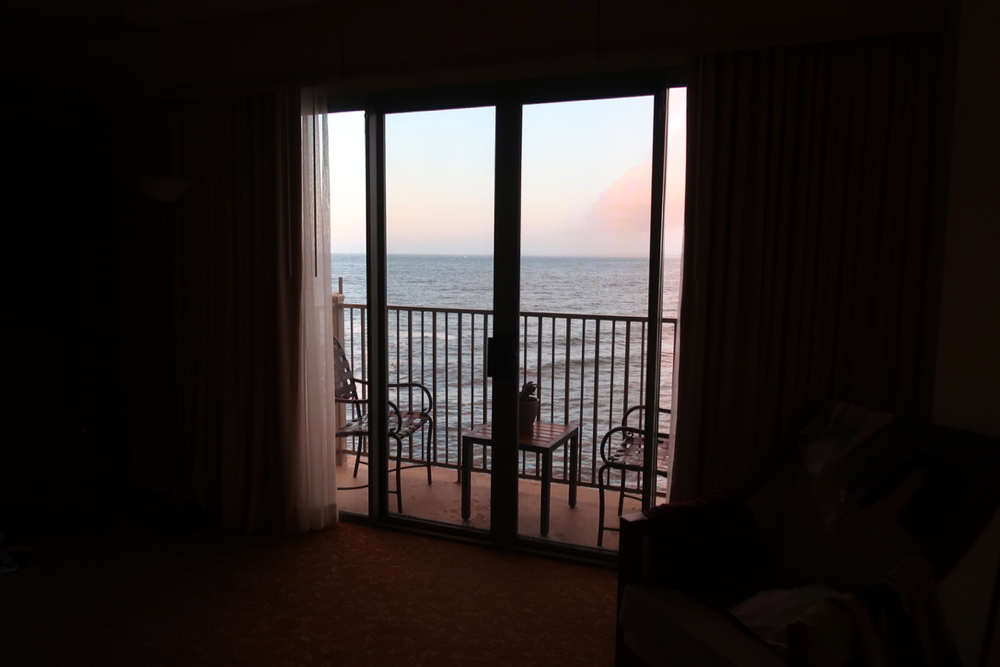 It would prove to be my last comfy night for at least a couple.

At the ass crack of the next morning I came to find via a text from Ferrentino that a Goodyear blimp ride I was scheduled to take that day (as a member of the media, or some shit) was cancelled because of high winds the previous afternoon. I was also notified that the Laguna Seca property had sold last year, and due to the new owners’ directive, among other items (fireworks/explosives, duh), bags were now dutifully being checked for alcohol.

Considering that it was too late to scrap my plans for the weekend entirely, I loaded up my bags with beer, and conjured up as many diversionary tactics as I could. Walking towards the bag check, I asked a security person where the media building was, at which time he invited us onto the back of his cart and drove both of us, as well as my contraband past the checkpoint and straight into the center of it all; It was not unlike getting a DEA agent to give you and your drug mule a ride across the boarder.

Once I finally had my credentials in hand, so began two days of swirling mess of stuff and faces that is the Sea Otter Classic, A Celebration Of The Bicycle®™©, starting with those of Ferrentino and Chipps; 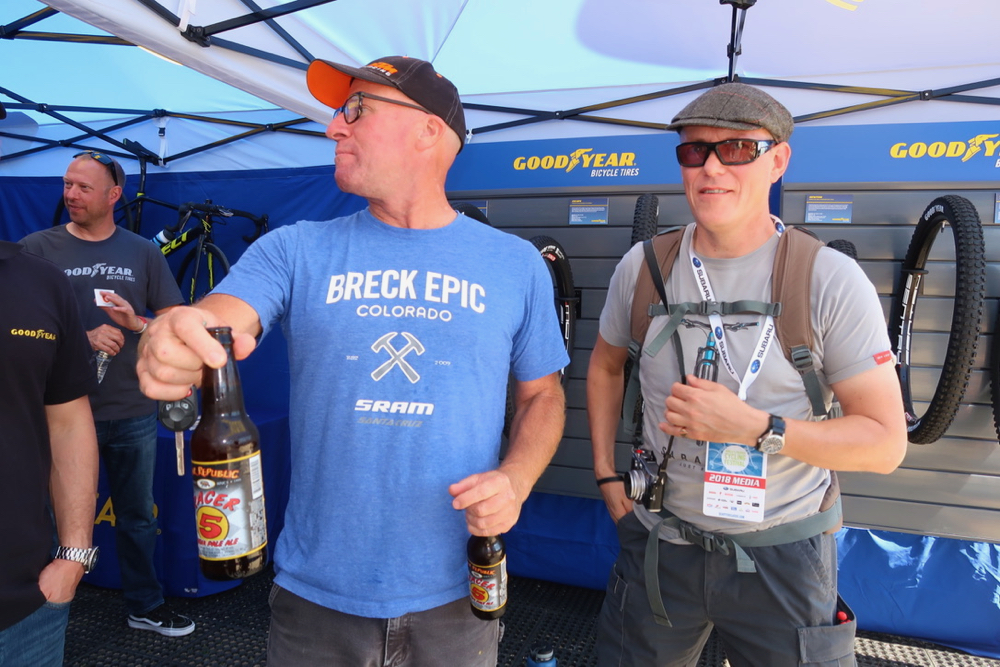 Besides doing things that random juggernauts do, Ferrentino was also talking the talk for Goodyear (hence the offer for a ride in their blimp) the cancellation of which we both decided was for the best, as we reckoned it woulda ended up looking like this; 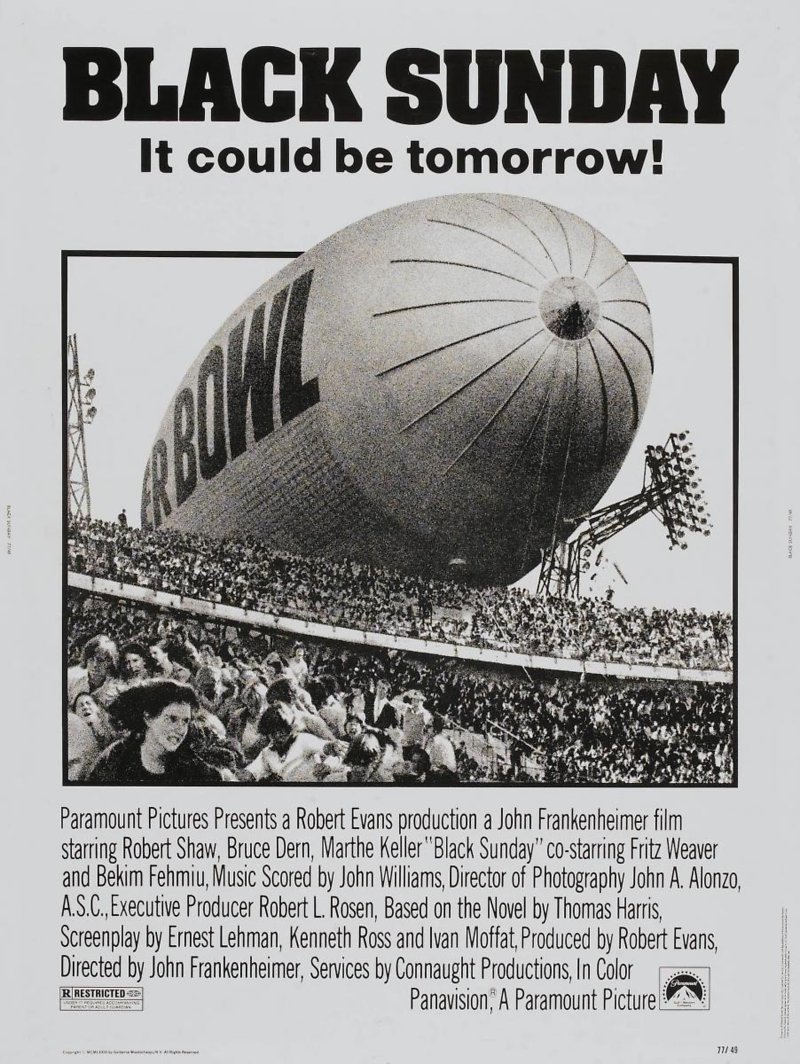 -Save for the fact that there woulda been a giant dong on the blimp’s LED signage.

Once in his presence, Mike gave me the scoop on their new skins, the one I was most partial to being their all season road slick; 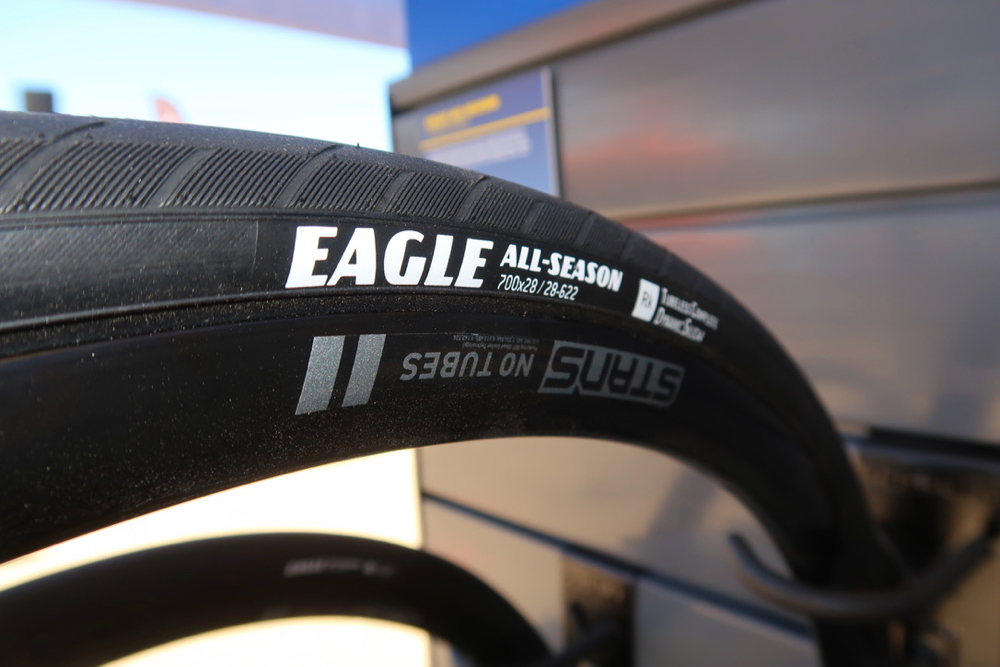 These are not your rich neighbor’s silk-cased $130, half season garbage. These are a working person’s, gonna go out and ride a road bike like you’re mad at it, multi-season gold.

He mentioned he was gonna float me some goods, but I had a beer in one hand, and two bags full of everything I owned in my back, so we opted to circle around on it eventually.

I like free stuff as much as anybody, but not if it hinders my ability to give and receive decent high fives.

Which I both gave and received immediately upon turning around and seeing Bob Scales; 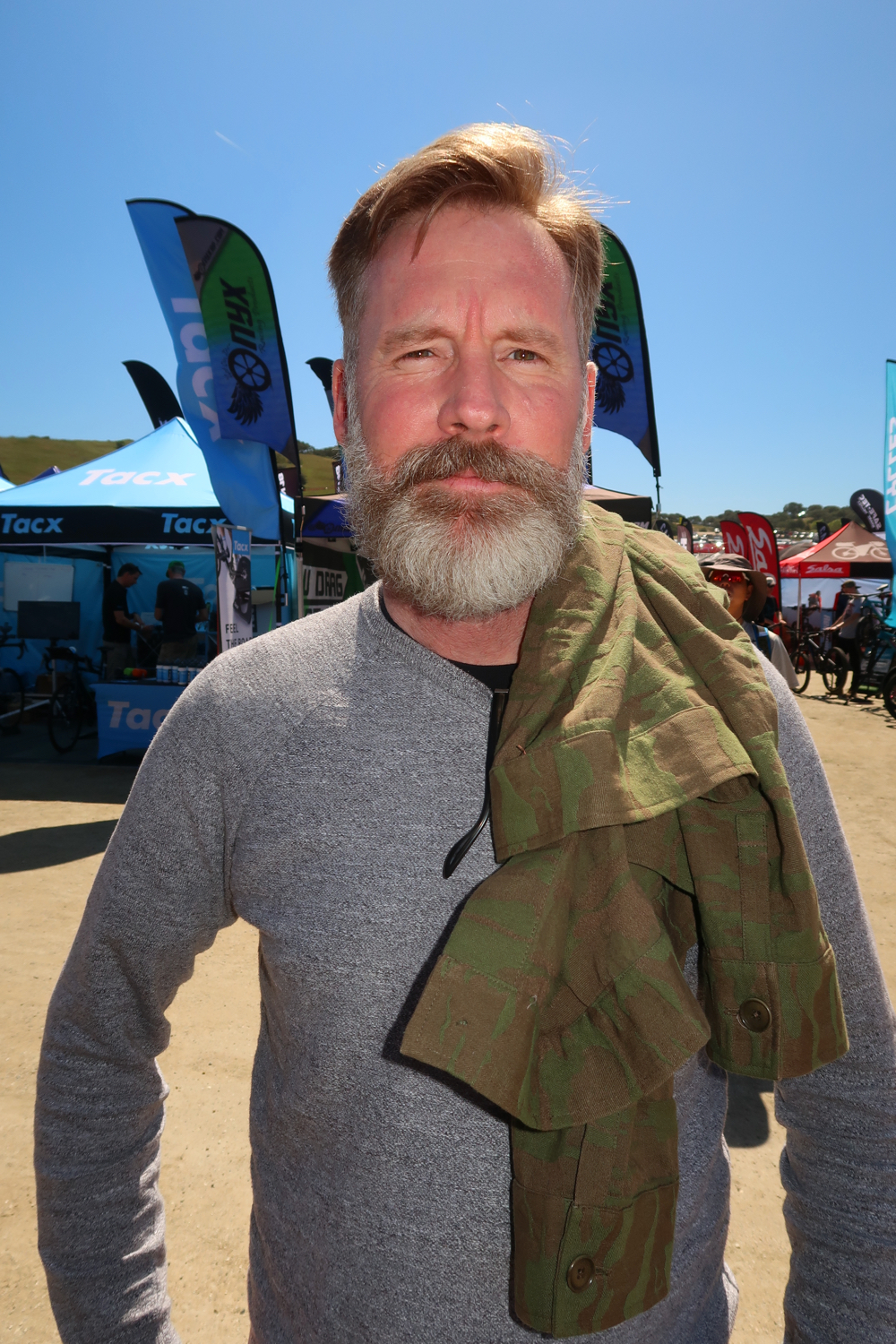 At this stage, I’d been walking the expo for a total of 30 minutes, I was already sweating my balls off and in desperate need of a beer. Luckily, Feedback Sports always (and I mean always always) has my back; 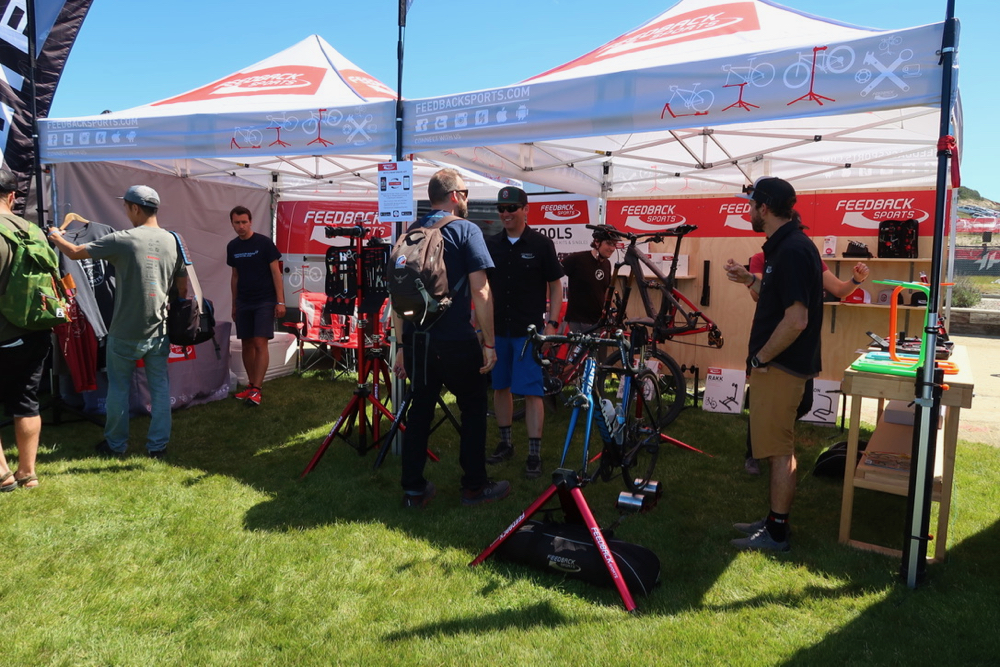 Way back in the olden days, when discussing a booth at an expo or trade show, I used to refer to Swobo as the corner to which all of the marbles rolled.

It was a safe house of sorts, and when they went away, Surly filled the role.

Every couple of years, there’s a void, and the best I can do is find a random booth, and post up behind it, only until said booth’s residents discover my presence and turn a hose on me.

Feedback is not afraid of feeding stray dogs like myself, and they welcomed me day after day with cold beer, snacks, shade, and nearly the most appreciated of all, Marketing Director Katie’s unwavering motherly nurturing; Naturally, while I was there, I put myself to work and documented a few of the goodies they had on display for me to play with; 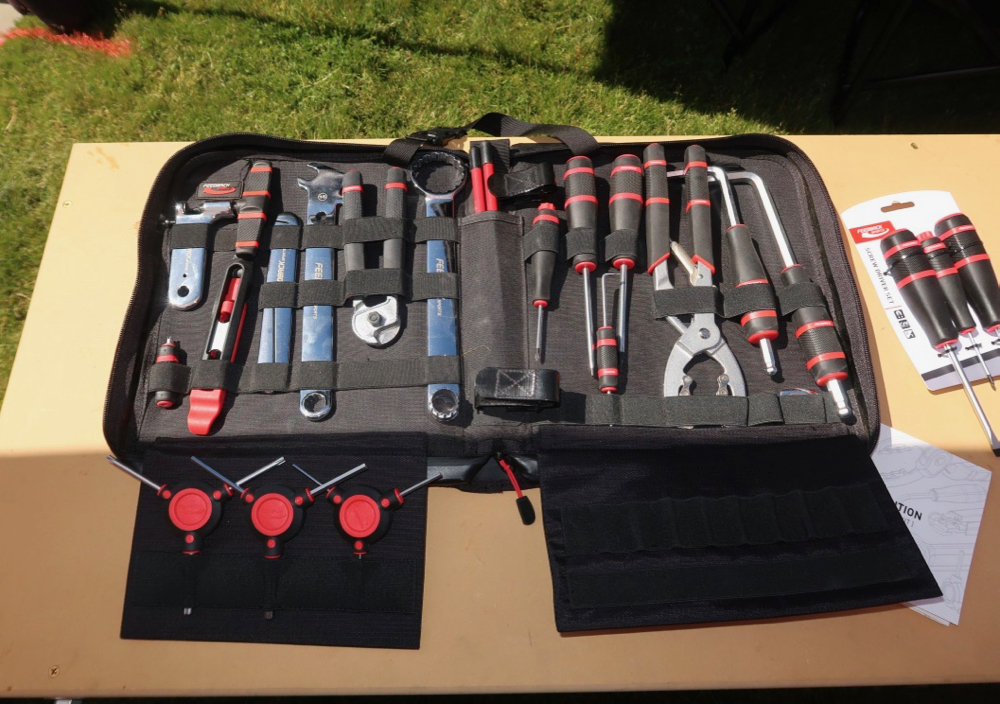 And then I took a photo of Andrew from CX Magazine taking a photo of some stuff; Because as ‘media’ or whatever, I gotta get the scoop.

But back to matters at hand, being one who’s always worked on my own bikes, I’m a sucker for nice tools. Hell, even as a little kid, and probably thanks to my dad, I was well aware of the difference between a precision instrument and some Chinese made dollar bin garbage.

So, many years ago, I was encouraged and then dismayed when Trek launched the Snap-On made line of tools called Wrench Force, before abruptly pulling the plug on it.

Thanks to the vision of Feedback big boss Doug Hudson; -the brand successfully fills my need that’s existed since the initial line of Wrench Force goods went away, and every year that they come out with some new wizbang or another, I get butterflies in my stomach, because I’m a nerd like that.

Moving on from there, I looked at more things and saw more people, like Jessica, and all of her hair; And Bart/little Bart of Mission Workshop; 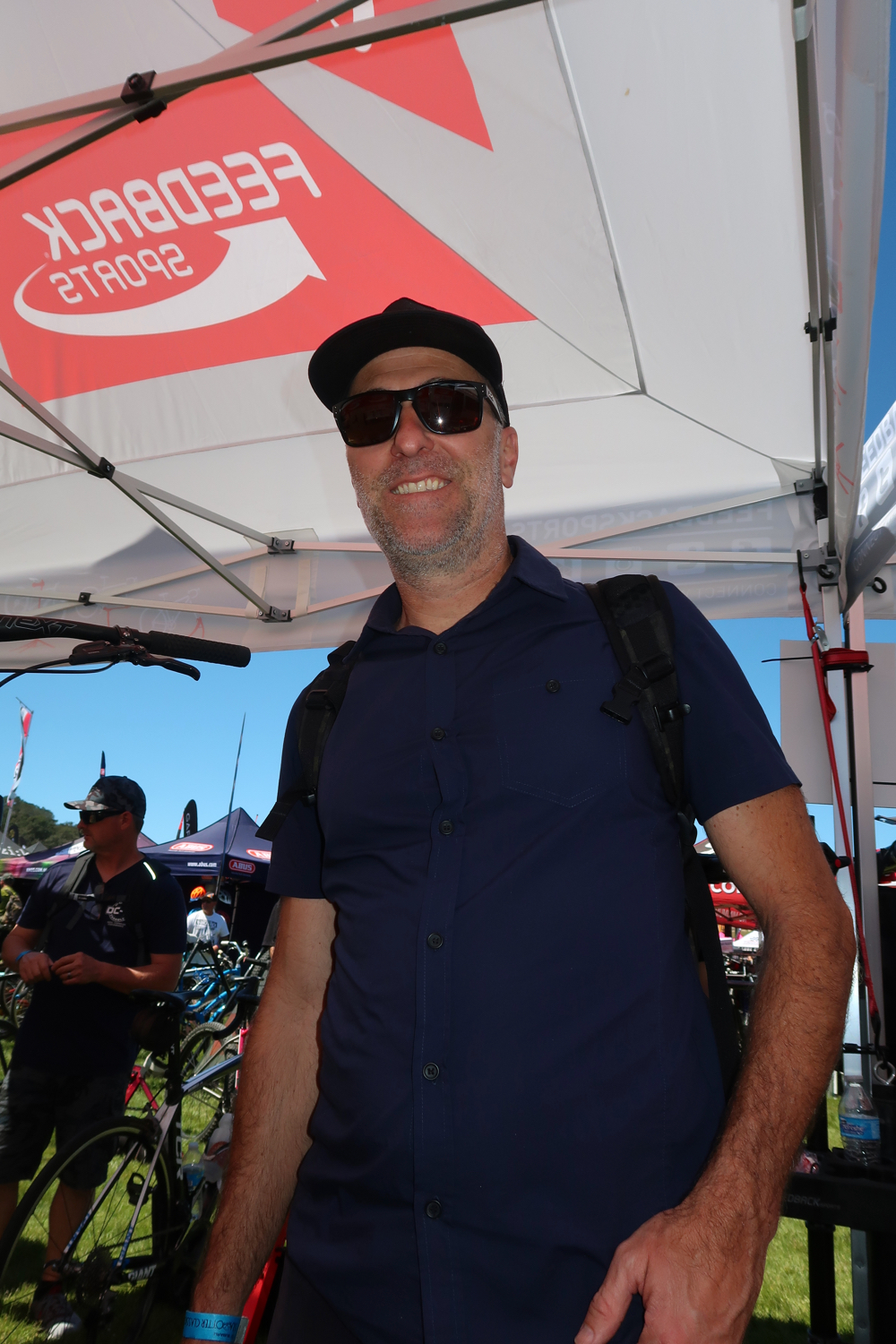 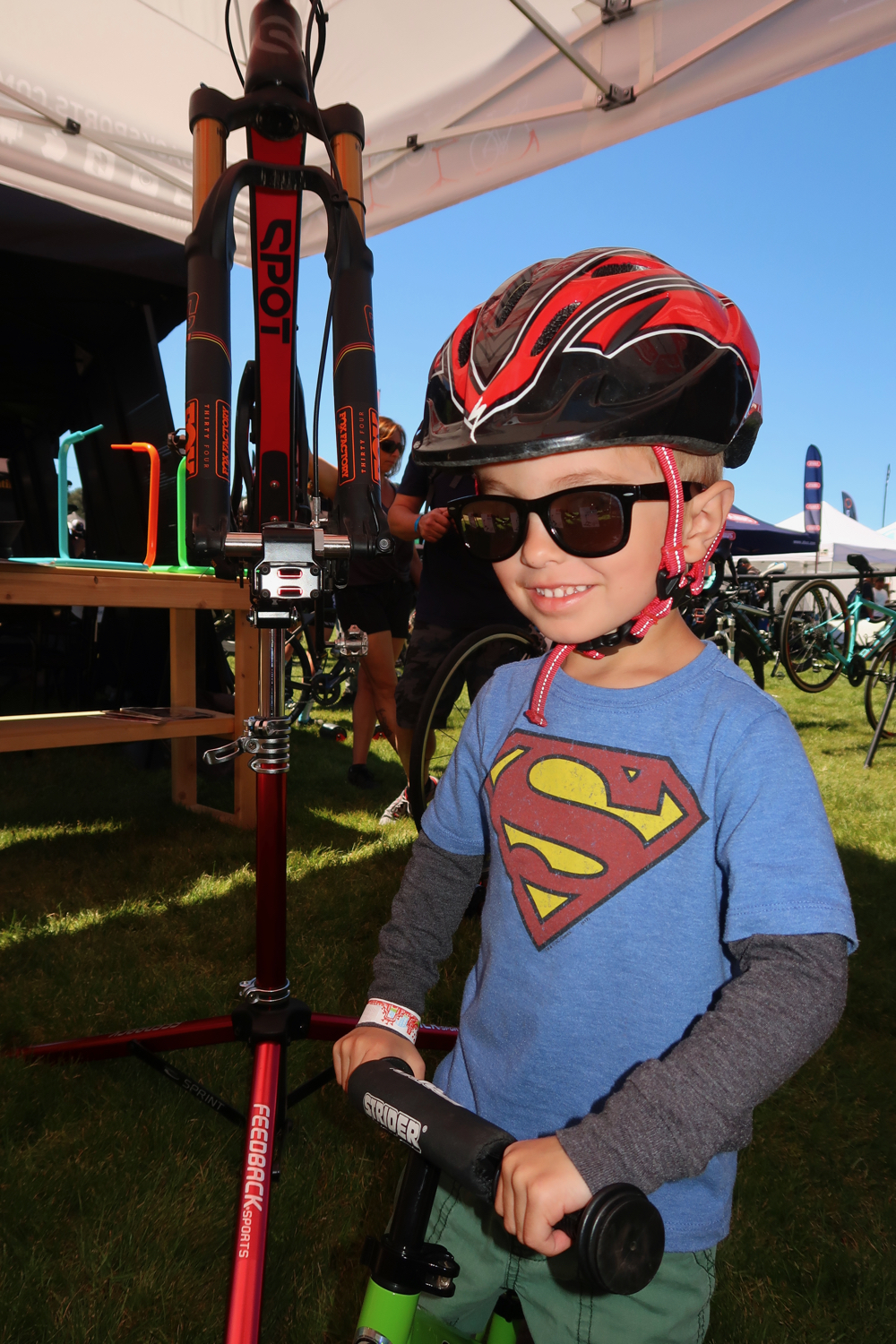 Or how about Ali Osgood of Kona Bicycles super badass, mega-honch fame?; Oh my god, it’s ridiculous how enamored I am with that human being.

I dipped inside the tent and saw some more of my Kona compatriots, as well as some spanky new hardware; 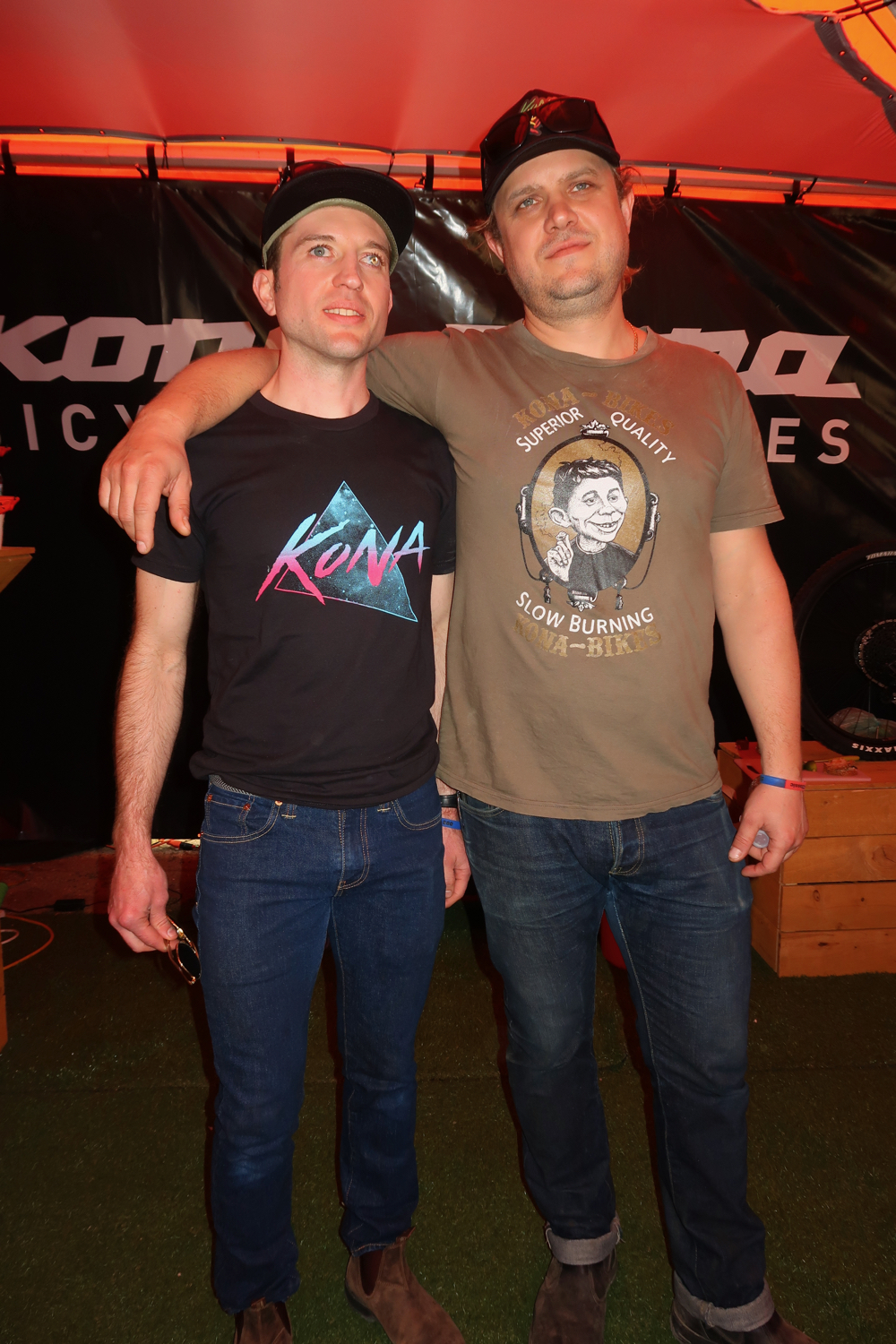 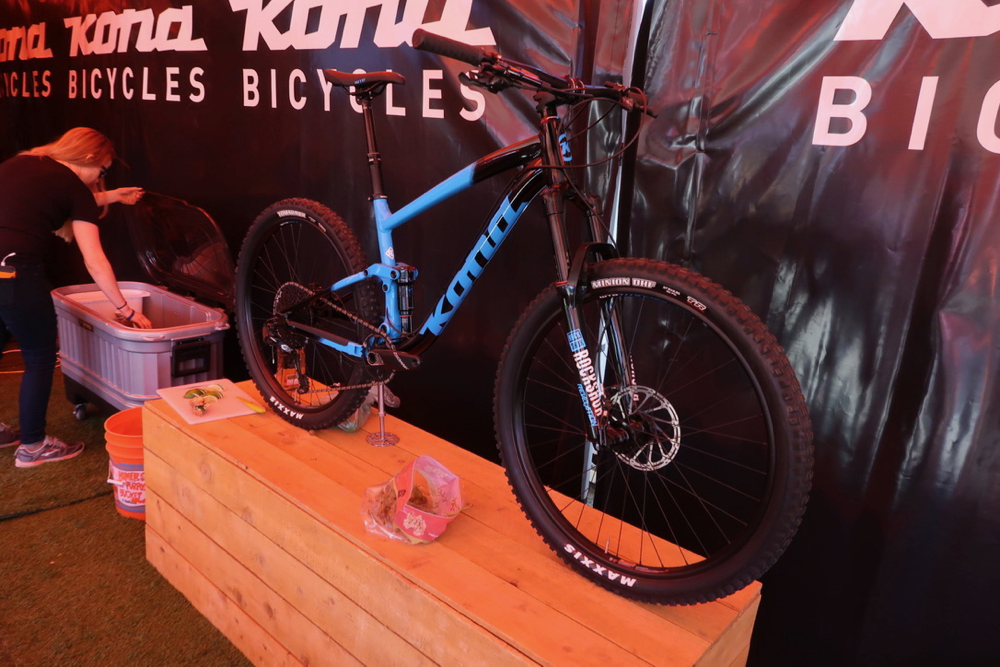 Having filled my eyeballs with that goodness, who should I immediately run into but cyclocross superstar, and all around cycling ambassador, Tom Jefferson; Before the dust even settled with that meeting, my earth was promptly shaken by this cat; His name is Jim Brown, and he and I have known each other from somewhere between five to twenty-five years. We were chitchatting and in the midst of our conversation, he said he was fixing to get hot in the upcoming e-bike race. I think I may have begun to respond with a slight inaudible utterance, not knowing whether to ask why or to leave it alone, when he started “I don’t know if you knew or not, but I have stage four lung cancer.”

The pieces began to fall into place.

In my mind, my recollections’ recollections, and our myriad of experiences together, Jim has always been a rock, and sickness is a thing that I wasn’t able to mentally relate to him, so until I actually heard it from his mouth, it seemed an impossibility. We went on to discuss his treatment, his fortitude, the Hold Fast Project, and what he’s got cooking going forward. The adage goes ‘after they made (that person), they broke the mold‘, but more than almost any person I’ve ever known, it’s wholly applicable to Jim.

After many hugs and handshakes, we parted ways, and it was then about time to go and see Chrome, whose motto for the weekend was ‘e’erybody got they own kind of booth flag’; 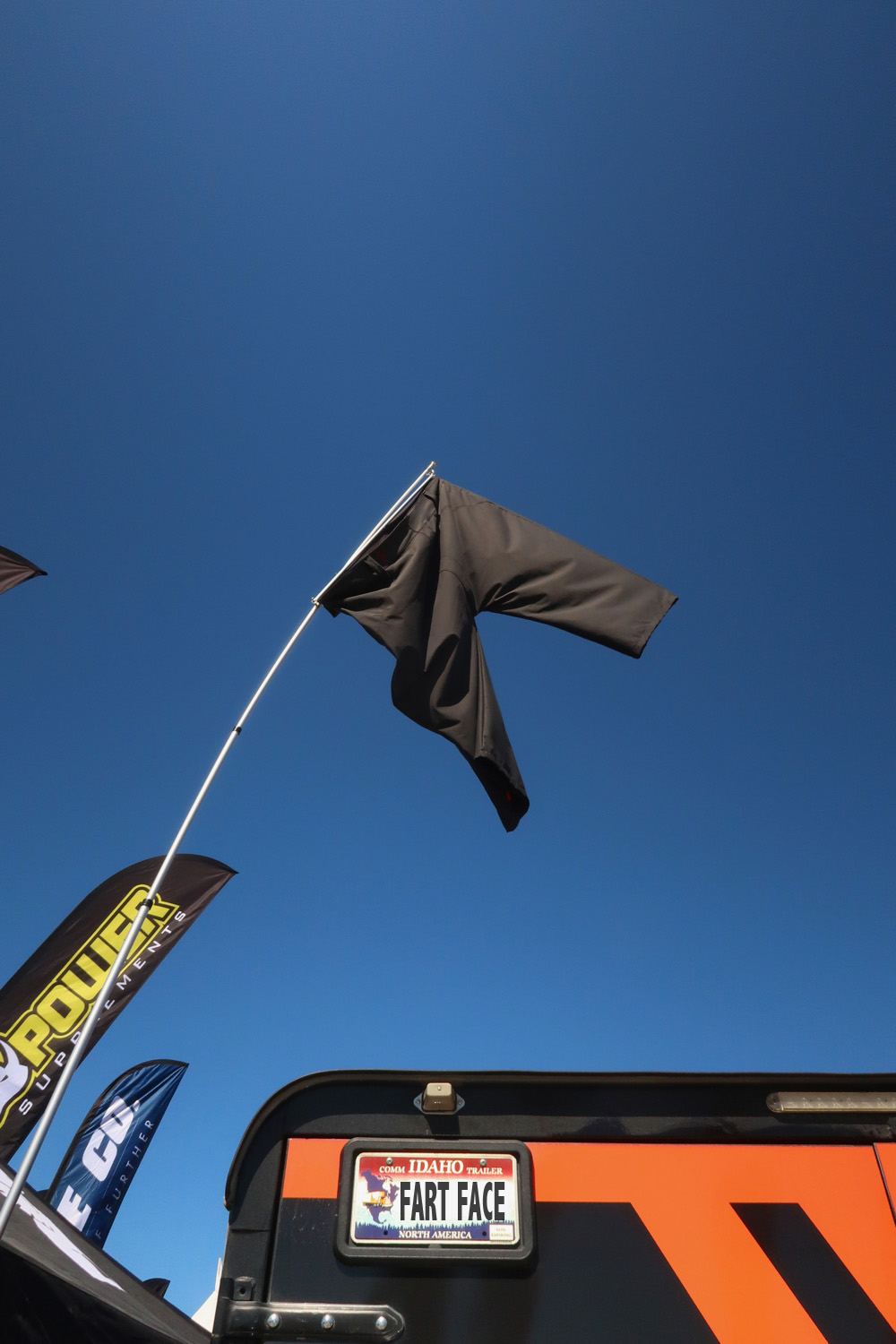 It was there that CD and I discussed (among other things) the importance of wearing as many pairs of glasses at once as possible; Once finally kicked out of their presence, I meandered over to the Fox Suspension trailer to see my old friend, the trophy truck; 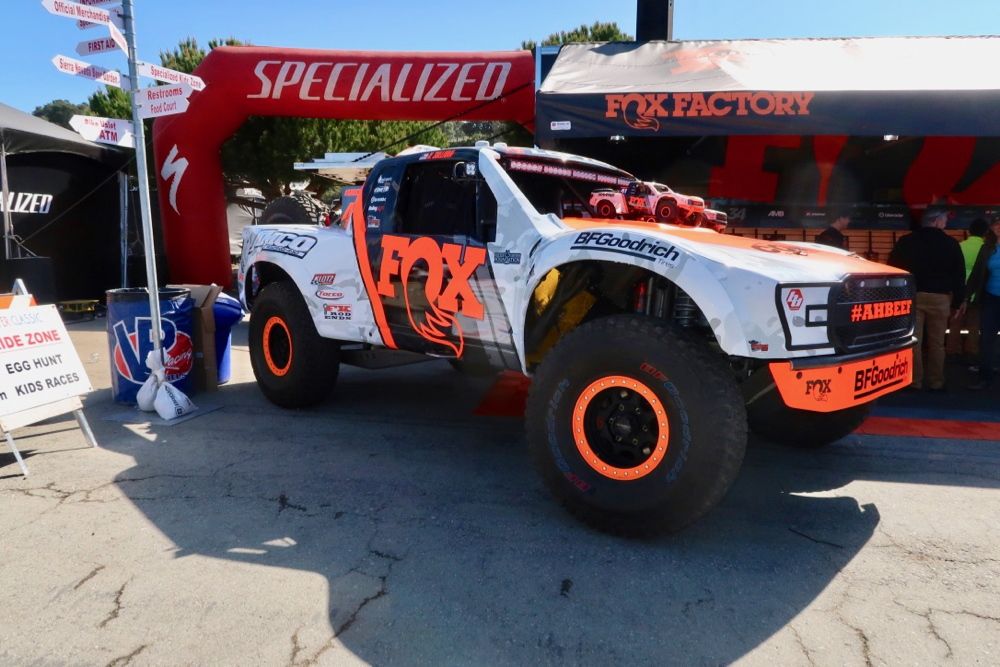 The attentive among us might recall last year when I declared that someday I would end up with a proper ride in the beast.

Rome wasn’t built in a day, and nobodies like me don’t get rides in 1,000 horsepower monsters just by asking.

Though nothing has been solidified yet, I have some irons in the fire that might eventually make it so.

Just then, I felt a cold wind at my back. Heading in that direction, it all made sense when I had a proper embrace with two of my all time favorite nemesēs, JPHNH, and Complayna; 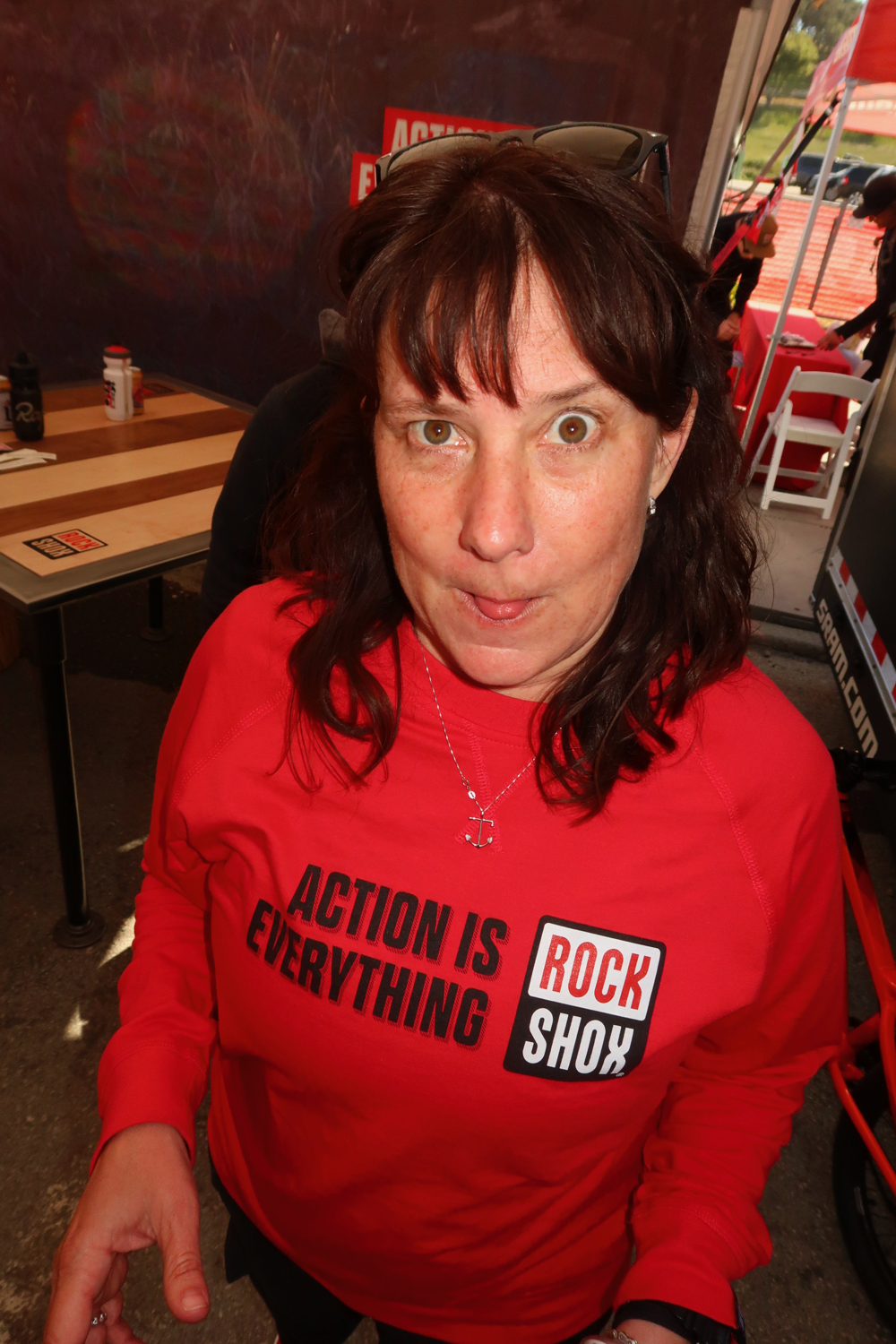 Say what you will about The Sea Otter Classic, A Celebration Of The Bicycle©™®, but it truly is a cavalcade of stars.

Finally, after all of those shenanigans, at least a twelve pack of delicious (smuggled) beer to my head, and literal pounds of wind blown dirt tucked away in nearly every nook and cranny of my person, it was about time to pull the plug, and head off to find some nourishment and rest.

Come back on Friday, and we’ll have a full wrap up which may or may not involve any or all other components that are important to a guy who sleeps on the floor.